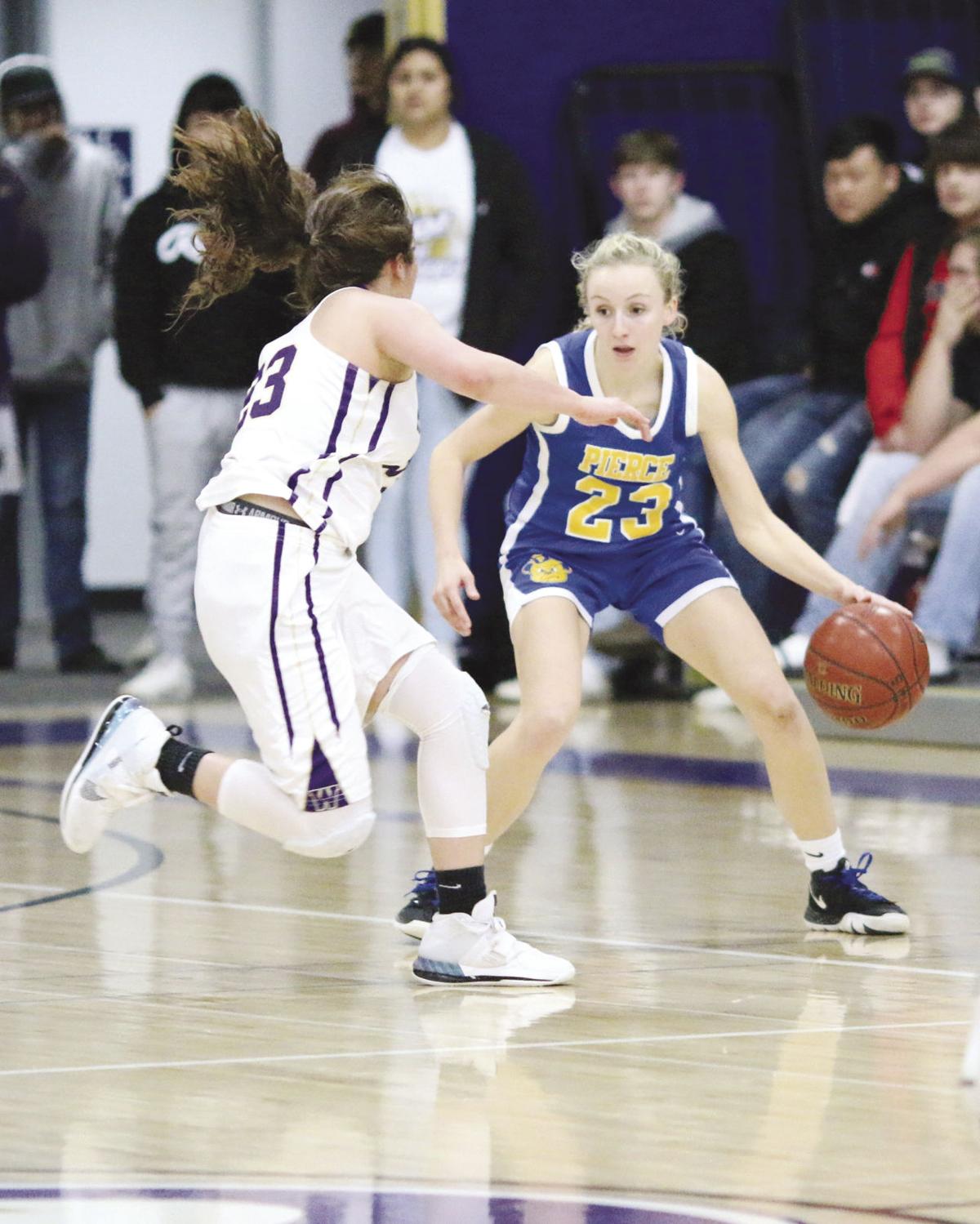 Pierce’s Sierra Murphy looks to bring the ball up court in the Bears’ SVL game with Willows on Jan. 21.  Murphy finished with seven points in the 73-52 loss. 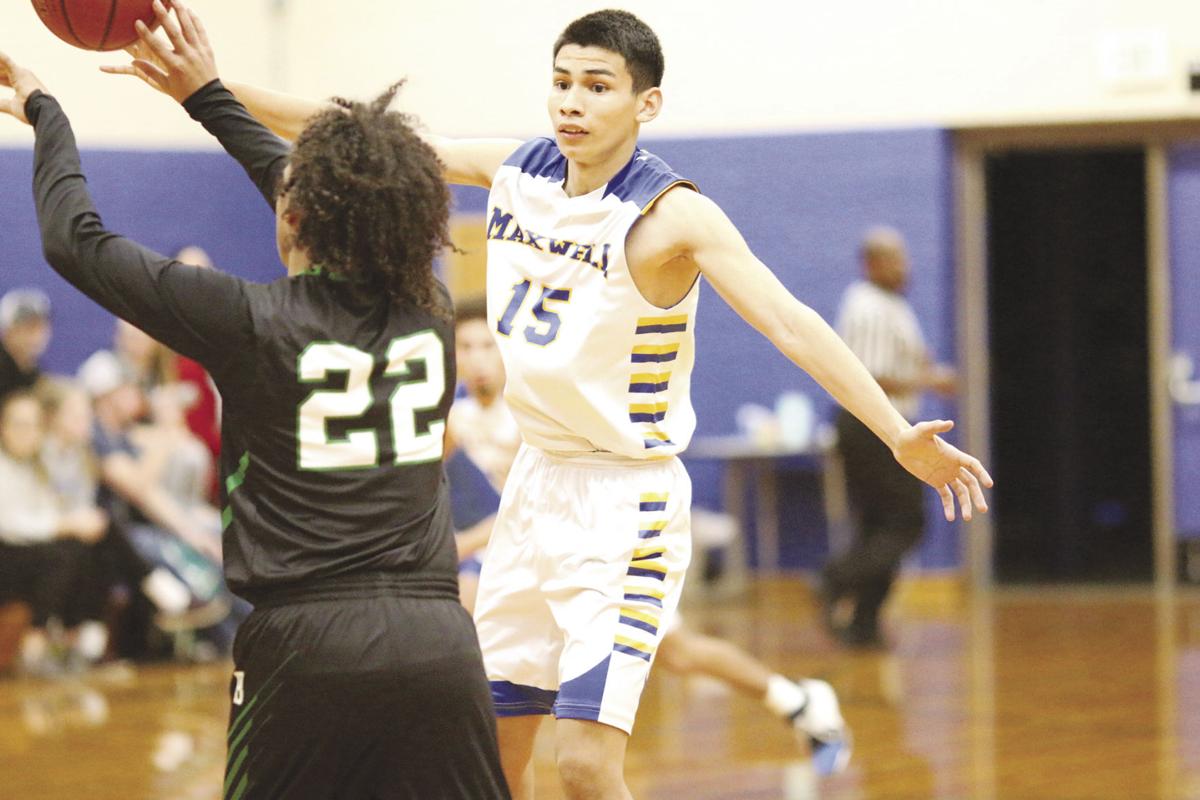 Maxwell’s Tony Lopez breaks up a pass in the Panthers’  Mountain Valley League loss at home to Biggs on Jan. 22.

Pierce’s Sierra Murphy looks to bring the ball up court in the Bears’ SVL game with Willows on Jan. 21.  Murphy finished with seven points in the 73-52 loss.

Maxwell’s Tony Lopez breaks up a pass in the Panthers’  Mountain Valley League loss at home to Biggs on Jan. 22.

As the midway point of the regular season approaches, local high school boys and girls basketball teams are in the midst of league battles which will ultimately shape the playoff picture.

Statistics from the win over the Warriors were not available by the Sun Herald print deadline.

Pierce (19-3, 4-0) starts the second half of the regular season on Friday on the road in Willows.

Finding themselves down 14 points going into the final quarter in their only game last week, Colusa rallied for 22 points in the fourth quarter to edge the Lions in a Sacramento Valley League match.

Jojo Luna tossed in 16 points while Carlos Gonzalez and Drew Bradbury chipped in with 13 and 10 points respectively.

Currently second in the SVL standings, Colusa (10-12, 2-1) was in Willows last night ahead of its game against Live Oak on Friday.

After stumbling on the road in Durham last Tuesday, the Yellowjackets returned home to defeat East Nicolaus.

In the game against the Trojans where not much went right, Harmandeep Kahlon and Emi Garcia were bright spots finishing with 14 and eight points respectively.

Nevertheless the ‘Jackets came back strong against the Spartans, as freshman Leo Trujillo had a team-high 20 points, Mo Hernandez tossed in 14 points and Kahlon was again in double figures with 11 points.

Williams (8-10, 2-1) continues Mid-Valley League play with a rematch at home against Durham tonight before welcoming Hamilton City to town on Friday.

It was a strong start for Maxwell last week as they topped Mercy in a non-conference game behind a 20 point game from Isaiah Cardenas and 14 points apiece from Trent Hendrix and Wyatt Hendrix.

Yet things got tougher the following evening against Biggs in a Mountain Valley League contest as they were out rebounded by the physical Wolverines and were ultimately unable to overcome turnovers.

Cardenas paced the Panthers with an 18 point effort while Wyatt Hendrix added 11 points and Trent Hendrix pitched in with 10 points.

Playing their final game of the week against Esparto on January 24, the Panthers came away with their first MTVL win although no individual statistics were provided.

Maxwell (7-7, 1-2) travels to Chico tonight to square off against CORE Butte then makes the long trip to Portola on Friday to meet the Tigers.

In their first game last week, the RedHawks overcame a scoreless second quarter and 10 missed free throws in the final period to edge the Lions in an SVL match in Live Oak where they were led by Abby Smith and Jaycee Brackett who finished with nine and eight points respectively.

Colusa then picked up a non-conference division win the following evening at home by downing the Spartans behind 16 points from Edith Moreno and seven points from Casey Medina.

The RedHawks (14-8, 2-1) had a tough task on Tuesday when they entertained first place Willows and will round out the week with a home game against Live Oak.

After suffering their first Sacramento Valley League loss on the road in Willows last Tuesday, the Bears took out their frustrations on Winters to get back on track.

In Willows Pierce held a two point advantage at the end of the first quarter, but were eventually worn down by the Honkers’ physicality as the game progressed.

Freshman Jocelyn Medina held her own against the Northern Section’s leading scorer Meghan Weinrich, finishing with 30 points to Weinrich’s 35, but the Bears struggled to rebound, committed too many turnovers and as a result saw the Honkers pull away in the second half.

On the other hand, Pierce had no such trouble against Winters as Medina netted 25 points and Murphy ended with 13 points after shooting 80 percent from the floor.

The Panthers struggled at home in their first two games last week falling to Mercy and Biggs, but bounced back to edge Esparto and earn their first Mountain Valley League win.

Rocio Velazquez led the Panthers with seven points in the loss to the Warriors on January 21, while Rosa Corona and Laynee Haywood each added six points each.

No individual statistics for the games with Biggs and Esparto were provided.

Maxwell (4-11, 1-2) is in Chico to face CORE Butte tonight then concludes the week on Friday in Portola.

Struggles with Mid-Valley League opponents continued for the Yellowjackets as they dropped a pair of games last week.

Statistics were not provided by Williams (3-7, 0-3), who this week hosted Durham on Tuesday before Hamilton City welcoming to town on Thursday.