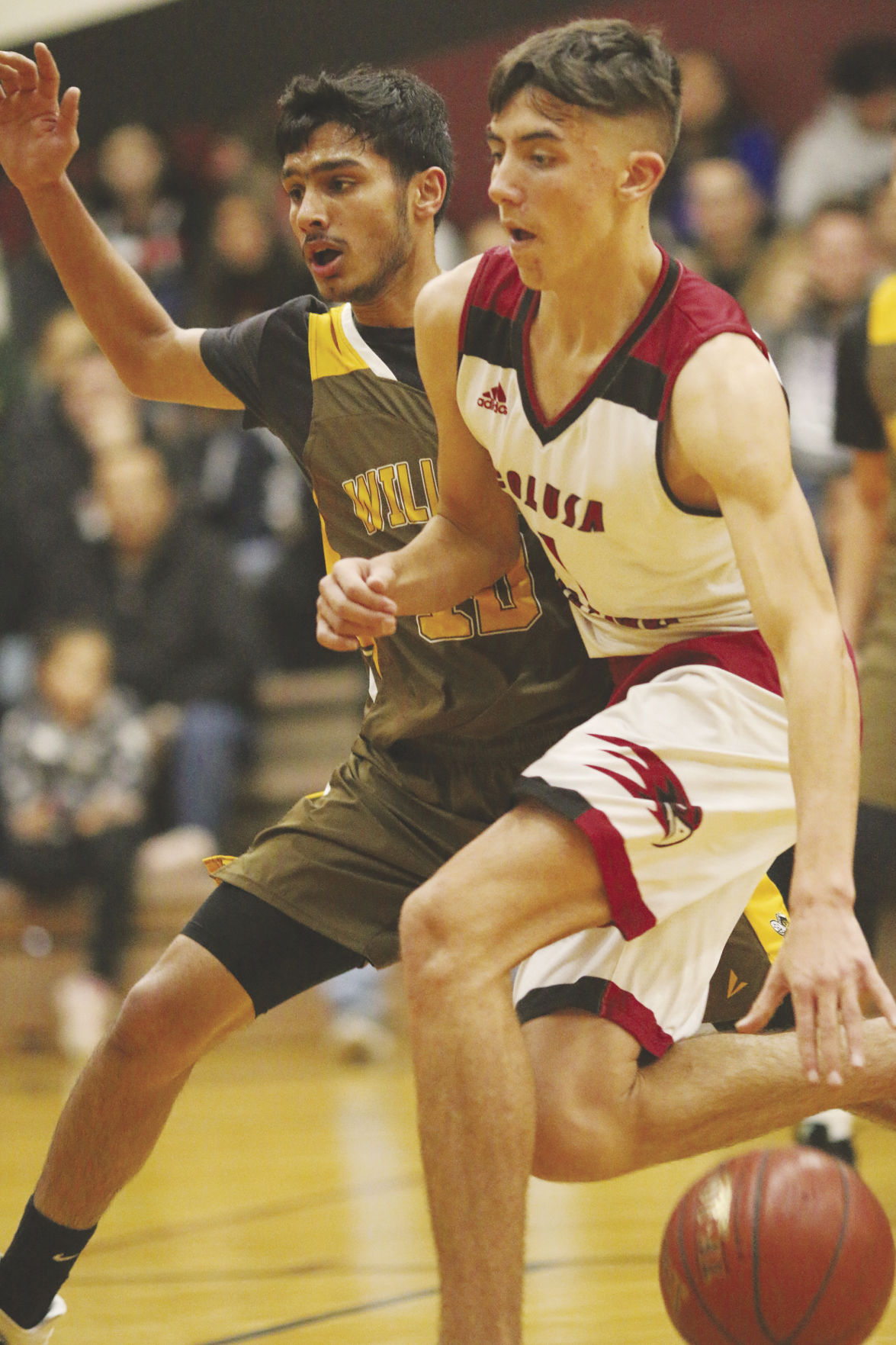 Colusa’s Mason Saso drives past Williams defender Harmon Kahlon in the RedHawks’ win over their county rival in the first round of Colusa’s Georgia Raczniak Tournament on Dec. 19. 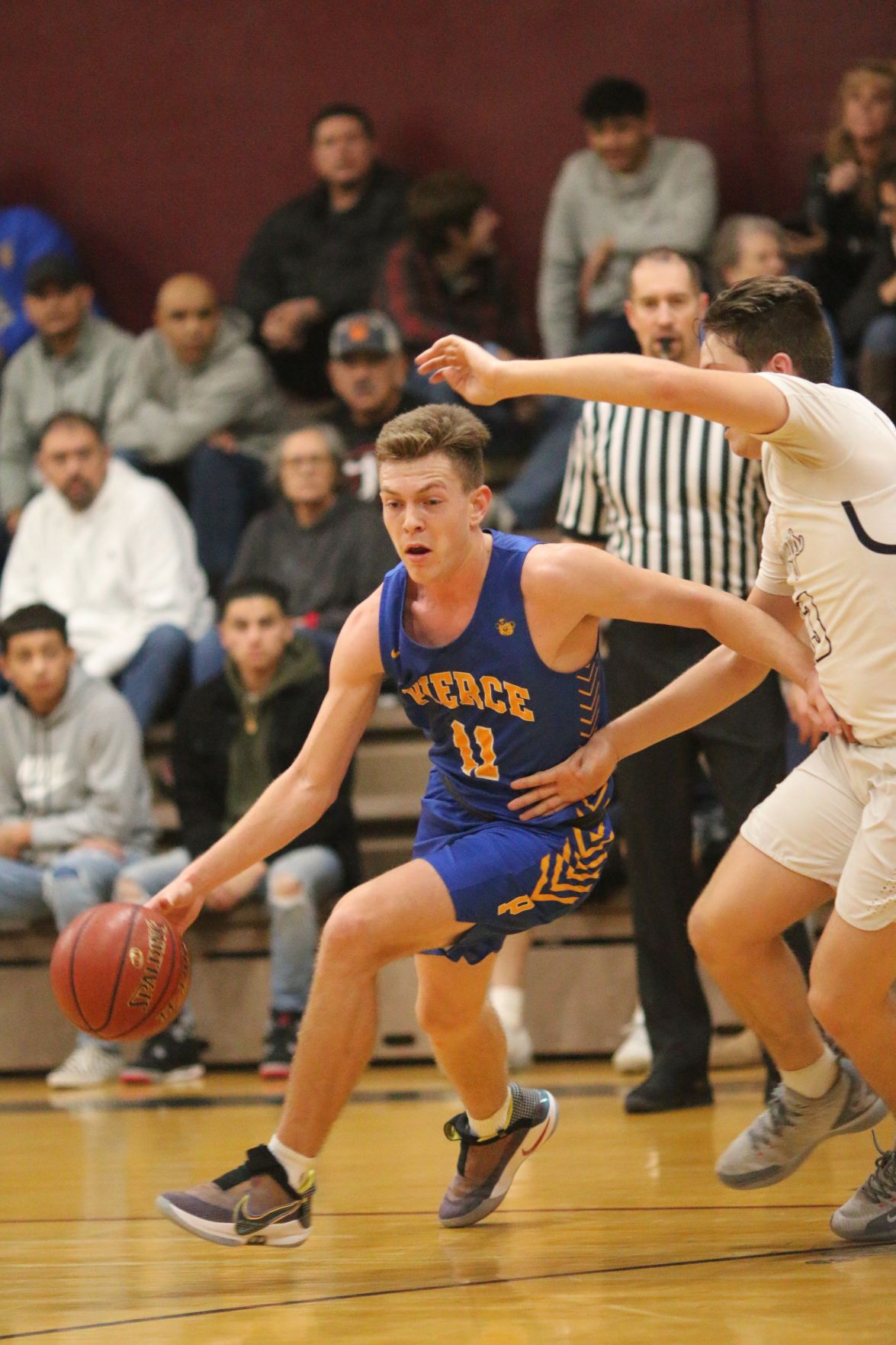 Colusa’s Mason Saso drives past Williams defender Harmon Kahlon in the RedHawks’ win over their county rival in the first round of Colusa’s Georgia Raczniak Tournament on Dec. 19.

Ultimately the Bears cruised to the championship and in the process served notice that they are the team to beat in the Mid-Valley, while the RedHawks and Yellowjackets, who finished fourth and sixth respectively, should be credited for their scrappy performances as they search for continuity and consistency ahead of league play.

In three games at the Raczniak Tournament, the Bears bested their opponents by an average of 19.6 points, exhibiting unmatched athleticism as they imposed their will at both ends of the court.

On Dec. 19, Pierce opened play with a win over Paradise, in a contest that featured a combined 18 shots made from beyond the three point arc, however it was the balance of the Bears that eventually overwhelmed the Bobcats.

Each of the Bears’ five starters finished in double figures led by an 18 point, seven rebound effort from Alex High and 15 points from Justin Mathews.

Against Gridley in the second round, it initially looked as though the Bulldogs might be an obstacle for the Bears after they hit two quick three’s to start the game, but Pierce found its rhythm in transition and began knocking down the outside shot.

While the Bulldogs attempted to make several runs to close the double digit gap, the Bears always had an answer leaving Gridley completely perplexed.

Luke Voorhees had a monster game for Pierce, pouring in 24 points and collecting seven rebounds while Mathews and Paiz each added 15 points.

In the finale, the Bears came out ice cold against Durham, but still were down just three points after the first quarter then turned up the defensive pressure in addition to heating up offensively to take a 13-point lead at the half and coast to the win.

High had another big game ending with 17 points and nine rebounds while Paiz and Medina each dropped in 13 points for the Bears who had a scary moment in the third quarter when Voorhees went down with what turned out to be a severely sprained ankle.

In the tournament’s aftermath, Coach Cody McCullough reflected on what his team can takeaway from the experience saying,

“I am excited with how well the team came together for each other during the tournament. It really showed in the first game where we had great ball sharing and then when Luke (Voorhees) went down and we were able to rally through it. Still I am constantly reminding them that we must maintain our intensity and focus and progress in each and every game.”

Two Bears received post tournament honors with Mathews being named the Most Valuable Player and Paiz earning a spot on the All-Tournament team.

After a short break for the Christmas holiday, Pierce (10-2) is back in action on Dec. 26 at the Dixon Ram Jam where they face Vacaville in the first round.

Mounting injuries created some difficulties for the RedHawks who following a thrilling win over their county rival Williams suffered two straight losses, although they fought to the end in both defeats.

Down five points to the Yellowjackets after three quarters, the RedHawks surged ahead in the fourth period with two big transition buckets then were able to hold on for the narrow victory.

All-Tournament selection Mason Saso had a team high 20 points while Ethan Lay and Drew Bradbury also made significant contributions down the stretch finishing with 11 and eight points respectively.

Colusa could not find a way to slow down a hot shooting Durham team the following evening despite a 21-point effort from Saso and 17 points from Cole Simmons.

Bradbury registered a double double with 11 points and 10 rebounds.

Against Gridley in the game for third place, the RedHawks gave it all they had, cutting the advantage to just five points with six minutes remaining, but it was as close as they would get as the Bulldogs were strong from the free throw line and put the game out of reach.

Seventeen points from Saso, 15 from Lay and 14 from Simmons made things exciting, but in the end it wasn’t enough.

Colusa (5-8) will next play at the Dennis Burnum Classic in Oroville, which runs from Jan. 2-4.

To open the tournament, the Yellowjackets turned in a stunning performance against the hometown RedHawks, but despite having two good looks in the final seconds which would given them the victory, they could not get the ball to fall.

Senior Mo Hernandez led all scorers with 23 points as part of an all-around impressive performance, freshman Leo Trujillo finished with 12 points while Emiliano Garcia and Harmon Kahlon chipped in with 10 points apiece.

Williams bounced back in the second round against Willows getting off to an 11-0 start and never looking back to claim the victory.

In the consolation game, again the ‘Jackets came close, but couldn’t hold the lead and came up short against Paradise.

Garcia had a noteworthy 24 point effort while Trujillo and Ruiz ended with 14 and 12 points respectively.

Williams (3-12) is off until January 6 when they travel to Biggs to take on the Wolverines.