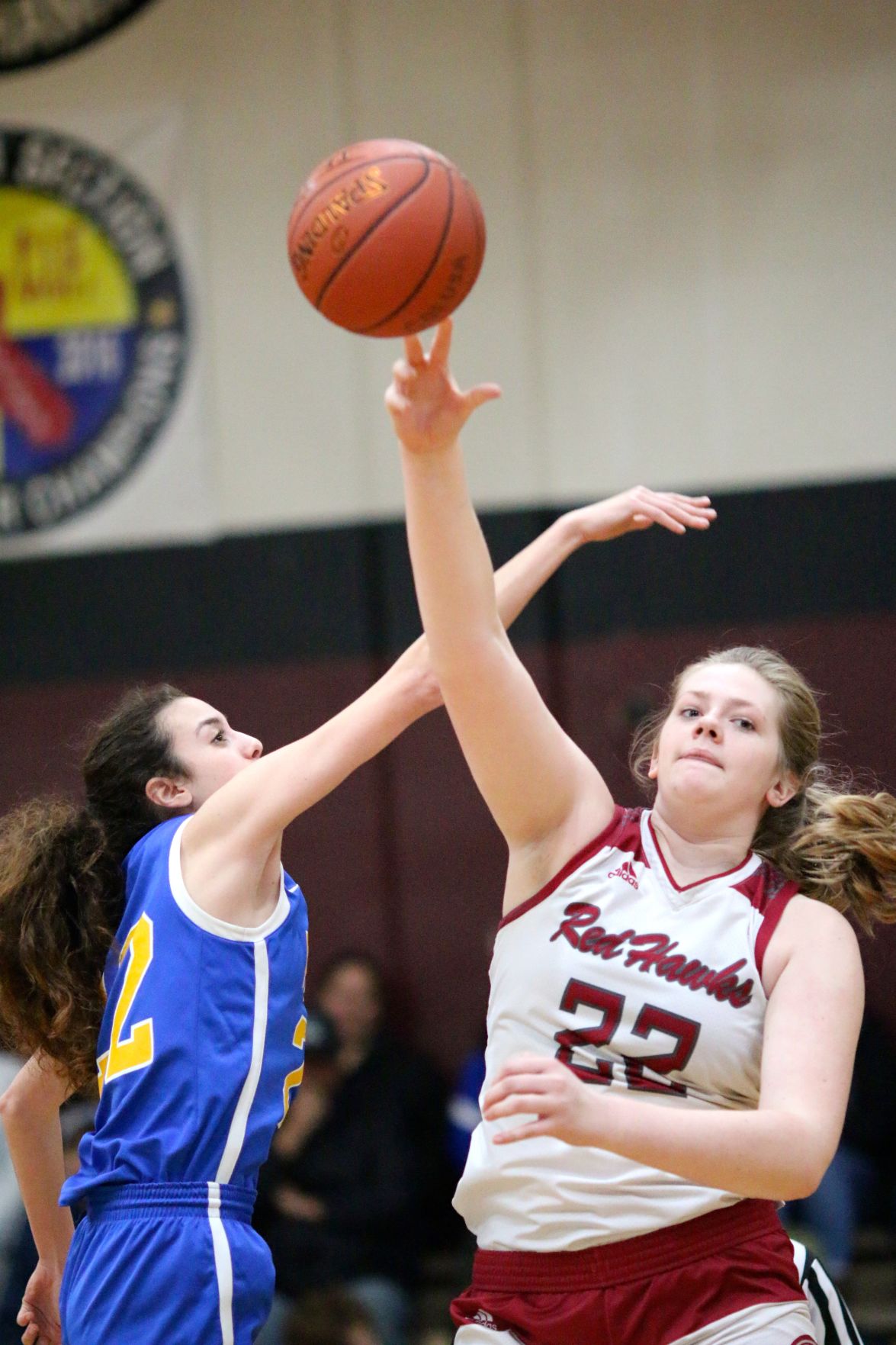 Colusa’s Carly Lay wins the opening tip in the RedHawks’ 56-29 victory at home over Pierce on Feb. 4.  Lay topped all scorers with 14 points. 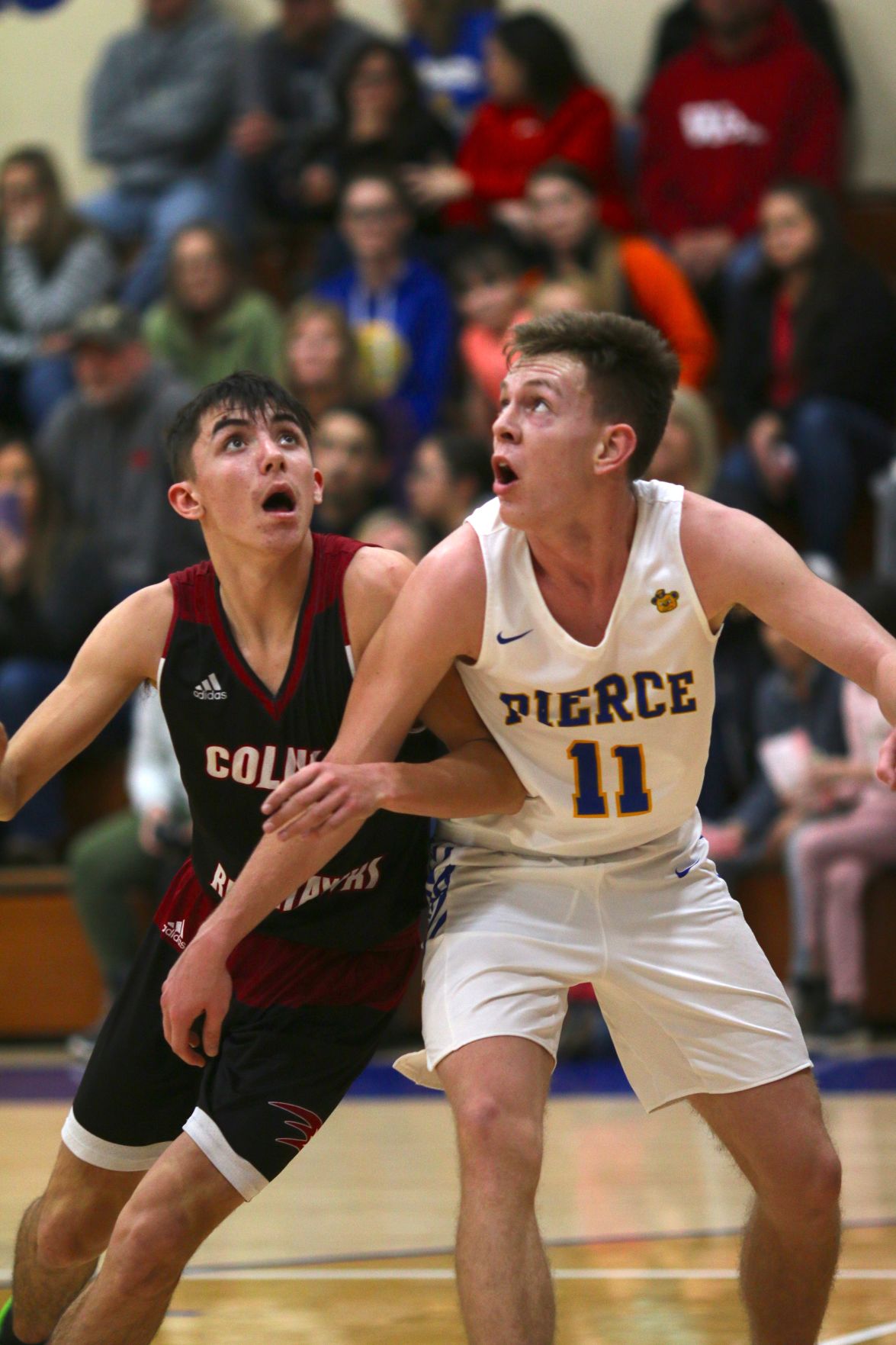 Colusa’s Mason Saso and Pierce’s Justin Mathews battle for rebounding position in the Bears’ 84-50 win over the RedHawks on Feb. 5.

Colusa’s Carly Lay wins the opening tip in the RedHawks’ 56-29 victory at home over Pierce on Feb. 4.  Lay topped all scorers with 14 points.

Colusa’s Mason Saso and Pierce’s Justin Mathews battle for rebounding position in the Bears’ 84-50 win over the RedHawks on Feb. 5.

Wins by the Pierce boys and Colusa girls highlighted a full slate of basketball games last week for county teams as the regular season draws near the end.

In sports, rivalries can be unpredictable as evidenced back on Jan. 17, when the RedHawks forced Pierce into overtime to earn a victory, but such was not the case last Wednesday night in Arbuckle as from the outset the Bears set the tone early and never took their foot off the throttle.

All five starters finished in double figures as the Bears proved too much for the RedHawks, easily handing Colusa’s zone trap, something that had been problematic in the first meeting between the two teams.

However this time around, Pierce coach Cody McCullough attributed an improved game plan, a change in attitude and the return of big man Luke Voorhees as contributing factors in the win.

“We know what we’re capable of and failed to play to those capabilities in the first match up so that fueled us for the second meeting, but more than anything, we created a turning point in our season the day before our game against Willows. Having Luke back has also had an enormously positive impact on the team’s effort, morale and overall play. There is no doubt that having him out there takes us to another level of basketball,” McCullough said.

Eduardo Paiz finished with a team high 18 points with Daniel Medina not far behind with 17 points in the blowout over their county and league foe.

In their second game last week, the Bears also took care of Live Oak to remain perfect in Sacramento Valley League play although no individual statistics were available.

Pierce (21-3, 7-0) concluded the regular season Tuesday night on the road in Winters and now awaits the NSCIF playoff seeding.

Although hoping for two wins last week the Yellowjackets only managed one when after losing at home to East Nicolaus they bounced back to defeat Hamilton City on the road.

A slow start against the Spartans last Tuesday doomed the ‘Jackets who rallied in the second half but ultimately fell short.

Hernandez had a big game last Thursday to propel Williams over the Braves with Trujillo adding 10 points in the win.

Coach Jeff Lemus credited a defensive adjustment with being key in the victory over the Braves, a team the ‘Jackets had lost to in the final seconds of a game less than a week ago.

Williams (10-12, 4-3) had a critical rematch with East Nicolaus on Tuesday night in Trowbridge where a win would see them hosting Durham on Friday with a chance for a share of the Mid Valley League title on the line.

Last week was one the RedHawks would like to forget after they suffered a lopsided loss to Pierce then were upset loss to Winters on Homecoming.

Mason Saso had the hot hand against the Bears tossing in 26 points but Colusa did not get quality looks at the basket then struggled to rebound as well.

Against the Warriors, the Hawks were outscored 31-9 in the fourth quarter by a red hot Winters squad though no individual statistics were reported.

Colusa (12-14, 4-3) hopes to right this ship this week, when it traveled to Biggs on Monday for a non- conference game ahead of entertaining Willows in the final regular season contest on Friday.

No statistics were provided by Maxwell (8-10, 2-5) who looks to snap its three game slide this week with games in Quincy on Monday, Esparto on Tuesday then at home against CORE Butte on Friday.

Last month when rivals Colusa and Pierce met in Arbuckle, the RedHawks suffered an embarrassing loss, however in the confines of Don Bransford Gymnasium, they exacted their revenge stifling the Bears with ferocious defense in what was the RedHawks best game of the season to this point.

While all five of Colusa’s seniors contributed in some way to the victory, Carly Lay dominated in the paint to finish with a game high 14 points, collecting rebounds and altering shots.

Also ending in double figures was Edith Quintana-Moreno and Jaycee Brackett with 13 and 12 points respectively.

After the game a very pleased Coach Darren Townzen summed up his team’s effort by saying, “Our shooting tonight was fantastic, but our defense was better.”

Colusa completed last week by cruising to a victory over Winters as 10 players broke into the scoring column led by Lay who finished with another 14 point performance.

On tap for the RedHawks (16-10, 4-3) this week was a non-conference game in Biggs on Monday and their regular season finale in Willows.

After a stunning loss to the RedHawks on February 4, the Bears came back with a vengeance against the Lions last Friday.

In Colusa Giselle Aceves led the way with 13 points, but the Bears were held well below their 52.8 point per game average by the aggressive RedHawk defense.

After her lowest output of the season against Colusa, Jocelyn Medina turned in a monster double-double against the Lions pouring in 36 points and collecting 19 rebounds to pace the Bears.

After a close contest against East Nicolaus, the Yellowjackets found themselves on the short end of the score against the Braves.

Jackie Rivera had a team-high seven points in the loss to the Spartans but statistics from the loss to Hamilton City were not provided.

Williams (3-12, 0-7) was in Trowbridge for a rematch with the Spartans tonight before finishing the season at home against Durham on Friday.

Laynee Haywood recorded a double-double with 12 points and 12 rebounds while Rosa Corona added 10 additional points in the loss to Quincy however no statistics from the game with Biggs were provided.

This week started for the Panthers (4-15, 1-6) on Monday in Quincy, continues in Esparto on Tuesday and wraps up at home on Friday when CORE Butte comes to town.