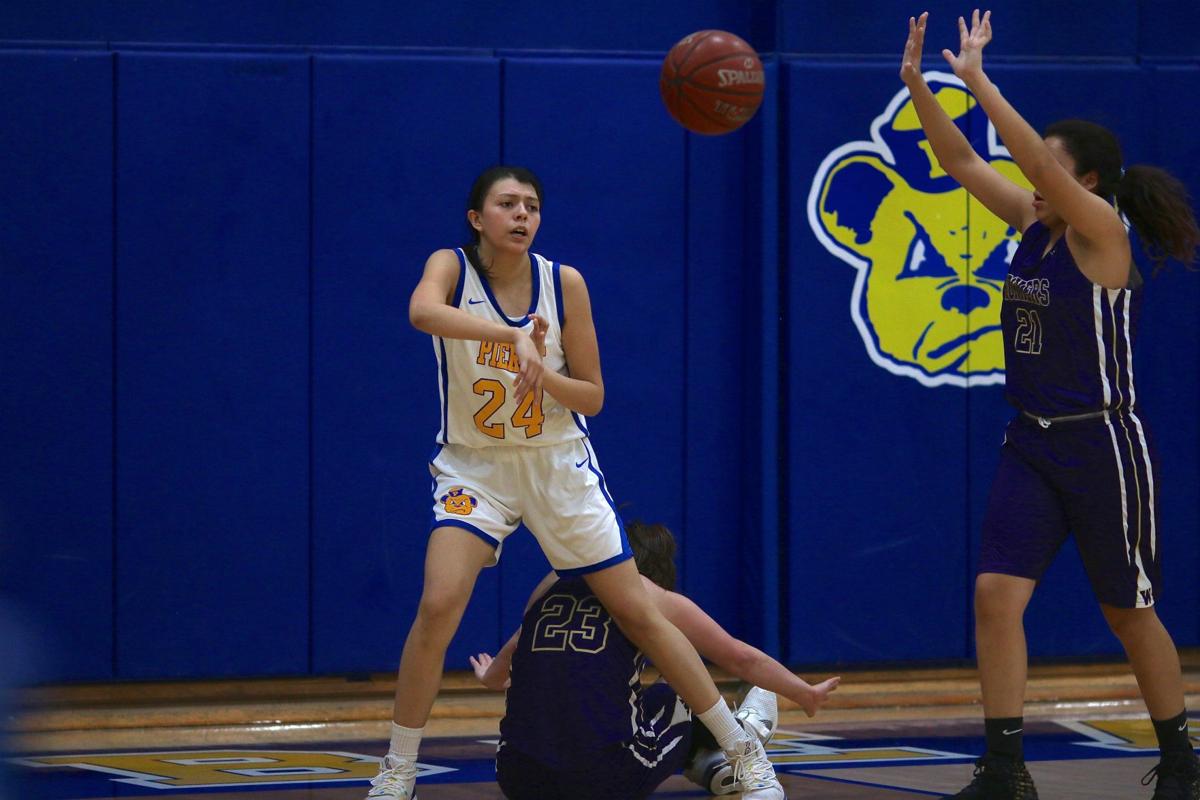 Pierce’s Mayra Sanchez makes an outlet pass in the Bears’ game against Willows on Jan. 30.  Sanchez pulled down nine rebounds in the 60-54 loss. 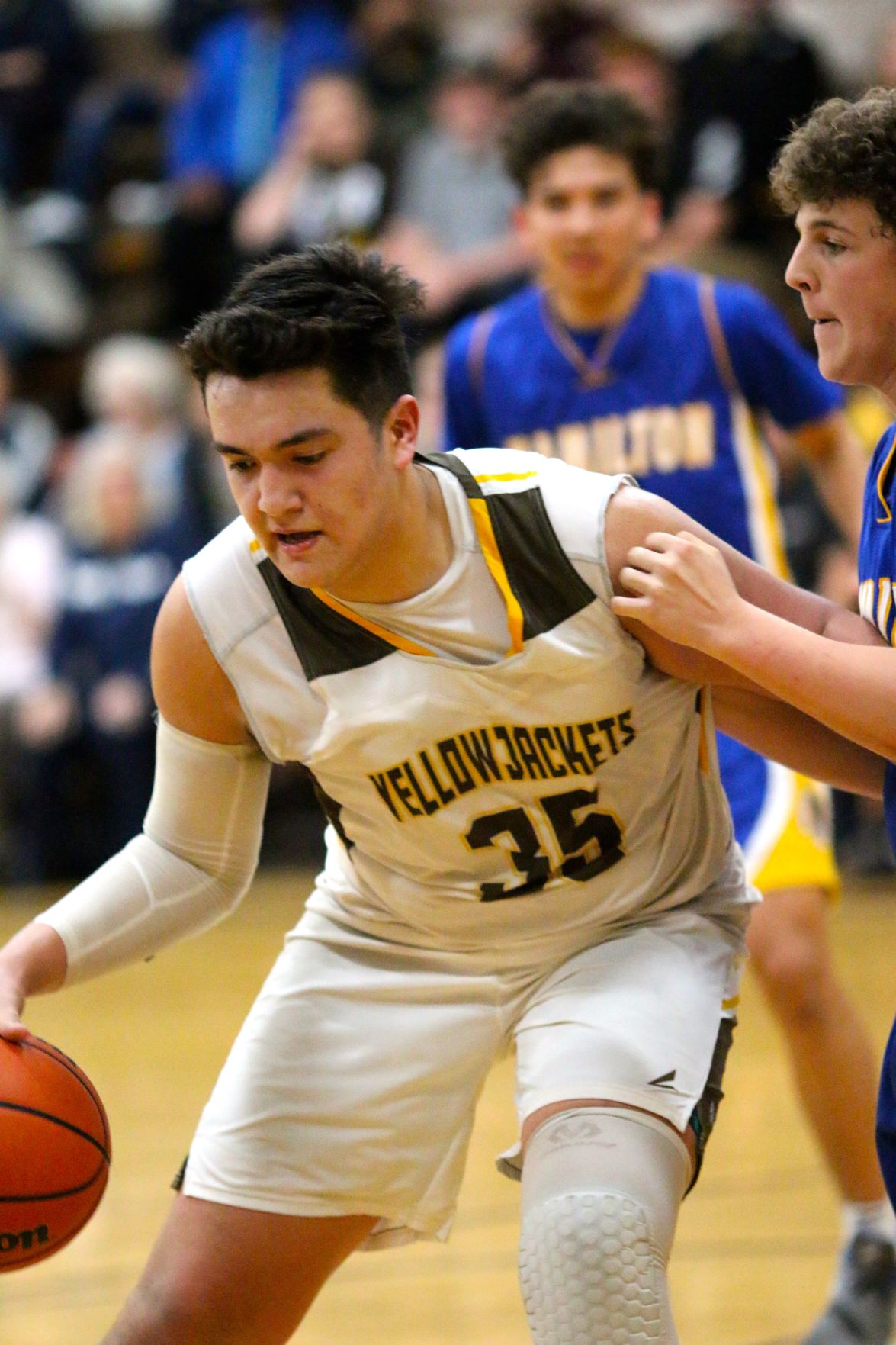 The Yellowjackets’ Emiliano Garcia makes a move in the post during Williams’ game with Hamilton City on Jan. 31.  Garcia had a team-high 17 points in the 58-55 loss to the Braves.

Pierce’s Mayra Sanchez makes an outlet pass in the Bears’ game against Willows on Jan. 30.  Sanchez pulled down nine rebounds in the 60-54 loss.

The Yellowjackets’ Emiliano Garcia makes a move in the post during Williams’ game with Hamilton City on Jan. 31.  Garcia had a team-high 17 points in the 58-55 loss to the Braves.

With just a handful of games remaining in the regular season, wins on the hard court are at a premium as the playoff picture emerges on the horizon.

Among the girls teams, Pierce and Colusa seem destined for post-season play, while all four local boys squads are in position to see their seasons continue.

After an easy win over Winters on the road, the Bears staged a spirited fourth quarter rally that came up just short against the Honkers to close out last week.

Facing the Warriors on Jan. 28, Jocelyn Medina recorded a double-double that included 25 points and 11 steals and Sierra Murphy dropped in 13 points, but the more impressive performance for the Bears came last Thursday when they hosted the Honkers, a team they had lost to by 21 points just nine days prior.

While nothing came easy in the match up with the Honkers, but Pierce put forth a valiant effort cutting a double digit advantage to just six with 19 seconds remaining in the game although ultimately could get no closer.

For coach Mary Reilly, the outcome came down to several key possessions where the Bears were just unable to execute.

“A few missed free throws, a few times we didn’t block out, that was the difference, but they gave everything they had and I’m very proud,“ said Reilly.

Medina paced the Bears with 22 points with 11 of them coming in final period while Murphy added a baker’s dozen and Lexi Dorantes chipped in with 10 points and eight rebounds.

Also putting forth a nice effort underneath the basket was sophomore Mayra Sanchez who pulled down nine rebounds.

This week saw Pierce (14-8, 3-2) in Colusa on Tuesday before a Friday night contest in Live Oak.

Last week was a difficult one for the RedHawks after they dropped two Sacramento Valley League contests.

On a tough night against the Honkers, who have just three losses on the season, Edith Quintana-Moreno led Colusa with 11 points and Jaycee Brackett pitched in with seven points, but the RedHawks could not overcome the effort by the Northern Section’s leading scorer Meghan Weinrich who dropped 30 points for Willows.

Colusa had hoped to bounce back against Live Oak last Friday, but things didn’t go as planned when they were outscored 27-17 in the second half and as a result fell at home to the Lions.

In her first game back from injury, Carly Lay had a team-high nine points with Quintana-Moreno tossing in seven.

Colusa (14-10, 2-2) which now finds itself in a tie for third place with Live Oak in the SVL behind Willows and Pierce hosted the rival Bears on Tuesday night ahead of its homecoming game against Winters on Friday.

Williams (3-9, 0-5) remained winless in the Mid-Valley League after falling to Durham and Hamilton City last week.

No statistics were provided by the ‘Jackets who had a home game against East Nicolaus on Feb. 5 before heading to Hamilton City on Feb. 7.

It’s been rough going for the Panthers in the Mountain Valley League as evidenced by the two lopsided losses they suffered last week.

No statistics from either game were available by the Sun Herald print deadline.

Now 4-13, 1-4 on the season, the Panthers, host Quincy tonight then are on the road in Biggs for their final game this week.

Colusa posted its second highest output of the season with a 30 point win over Willows last week before narrowly edging Live Oak for the second time in 10 days.

Five RedHawks finished in double figures and 10 broke into the scoring column in the offensive eruption against the Honkers led by Mason Saso with 22 points.

In a tightly contested affair in Live Oak last Friday, Colusa outlasted the Lions behind 23 points from Saso, an additional 13 points from Carlos Gonzalez and another 10 point effort by Luna.

Just a game behind in the Sacramento Valley League standings, Colusa (12-12, 4-1) battles Pierce on the road tonight with a share of the league title at stake, then closes out the week with a homecoming game against Winters on Friday.

Pierce remained perfect in Sacramento Valley League play downing Willows on the road in its only game last week although statistics were not available by the Sun Herald print deadline.

Tonight the Bears (20-3, 5-0) host the rival Colusa RedHawks, the only SVL team to challenge them thus far, then round out the week on Friday when they host Live Oak at Natalie Corona Gymnasium on Senior Night.

After switching up their defense in Durham last Wednesday, the Yellowjackets avenged an earlier blowout loss to the Trojans to come away with a Mid-Valley League win.

However employing the same 1-3-1 trapping defense against Hamilton City last Friday at home wasn’t as successful as Williams got caught out of position allowing the Braves to score easy transition baskets.

Foul trouble also proved to be an issue as starters Hernandez and Ozzy Ruiz had to be relegated to bench for extended lengths of time.

Still the ‘Jackets’ gave themselves a chance with a furious 24 point fourth quarter rally taking a lead with just 1:15 remaining in the game when Trujillo picked off a pass at mid-court and scored on a breakaway.

Yet while the Braves answered to take a three point lead, Williams had a chance to tie, however it was not to be as their last shot rolled of the rim at the buzzer.

Emiliano Garcia was strong in the paint finishing with a team-high 17 points while Ruiz finished with 14 points and Hernandez contributed 10 points to the total.

The Yellowjackets (9-11, 3-2) have a tough task again this week as they entertained East Nicolaus on Tuesday before heading to Hamilton City on Thursday for the rubber match with the Braves.

Results from Maxwell’s games last week were incomplete however the Panthers will welcome Quincy town tonight before heading to Biggs on Friday.