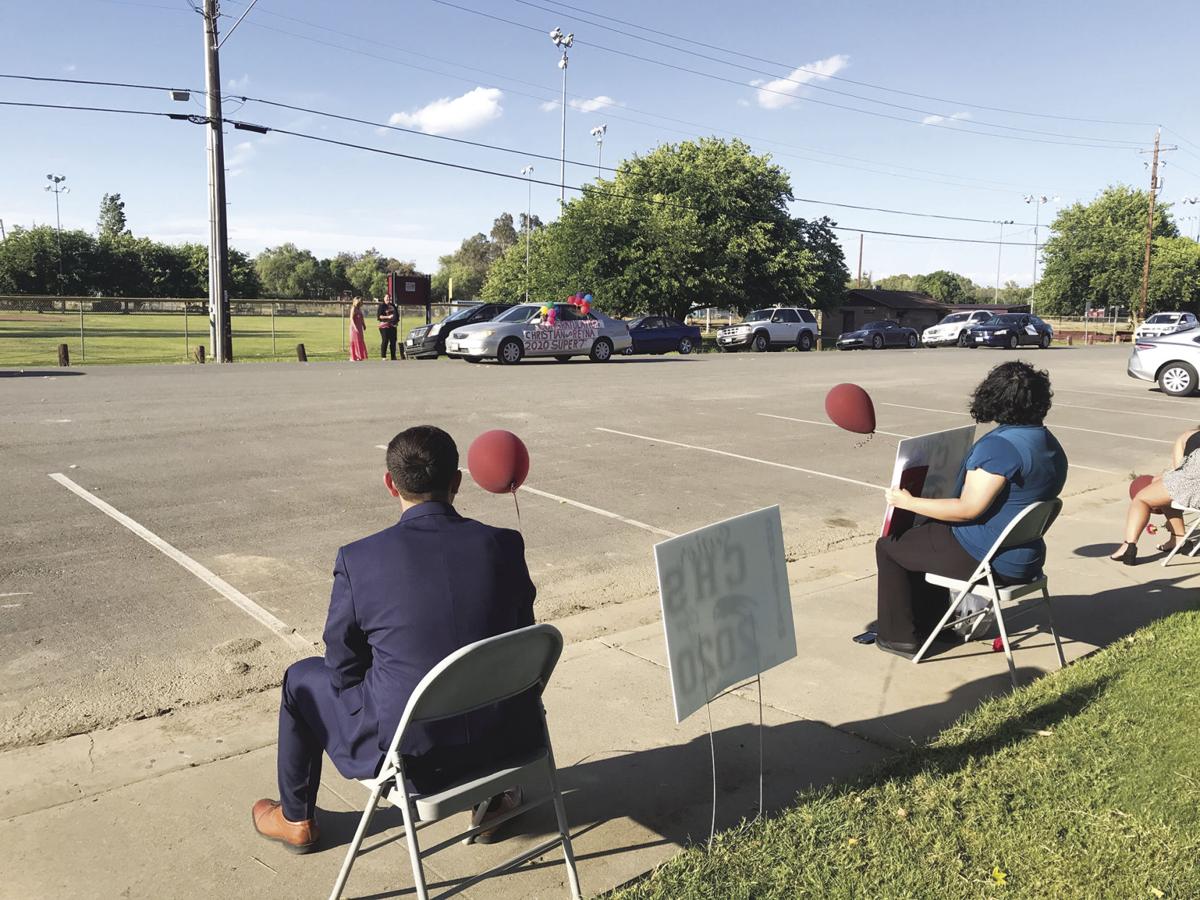 CHS seniors Christian Reyna, left, and Alejandra Melchor Barragan look on as a parade of cars cheer and honk to congratulate them on being among this year’s Super Seven award honorees. 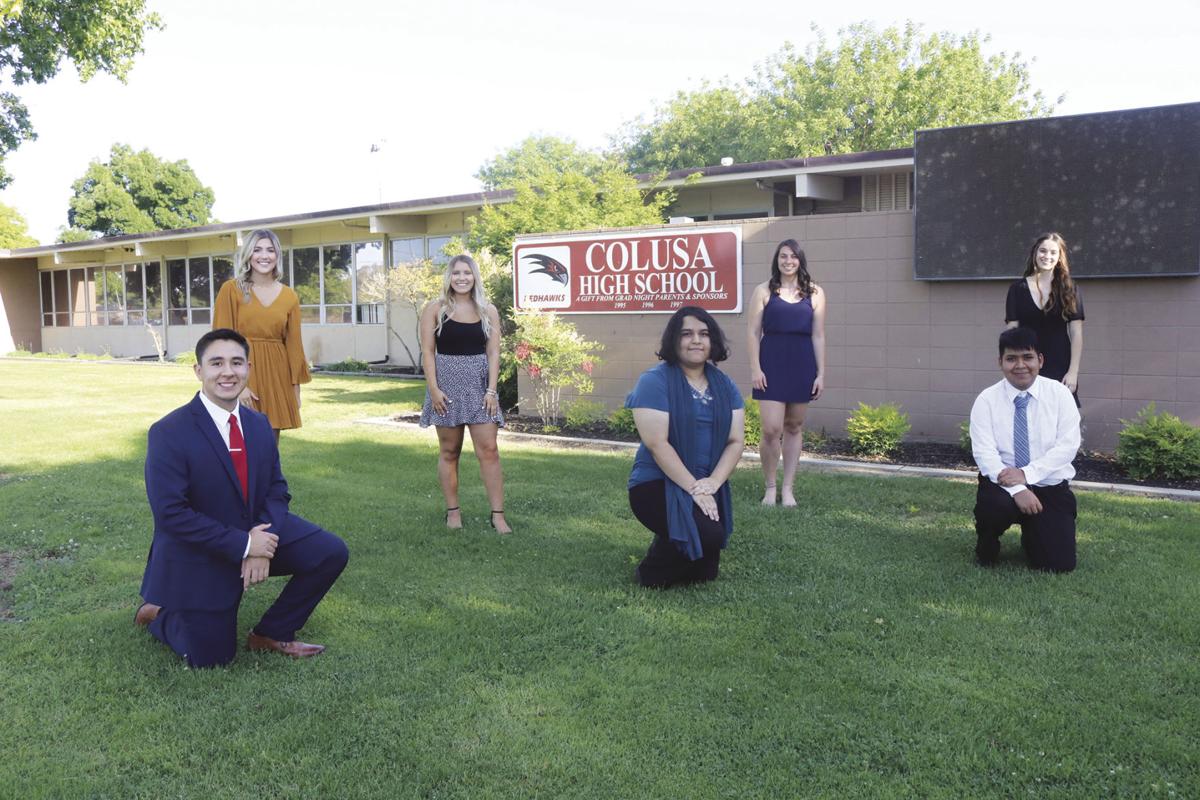 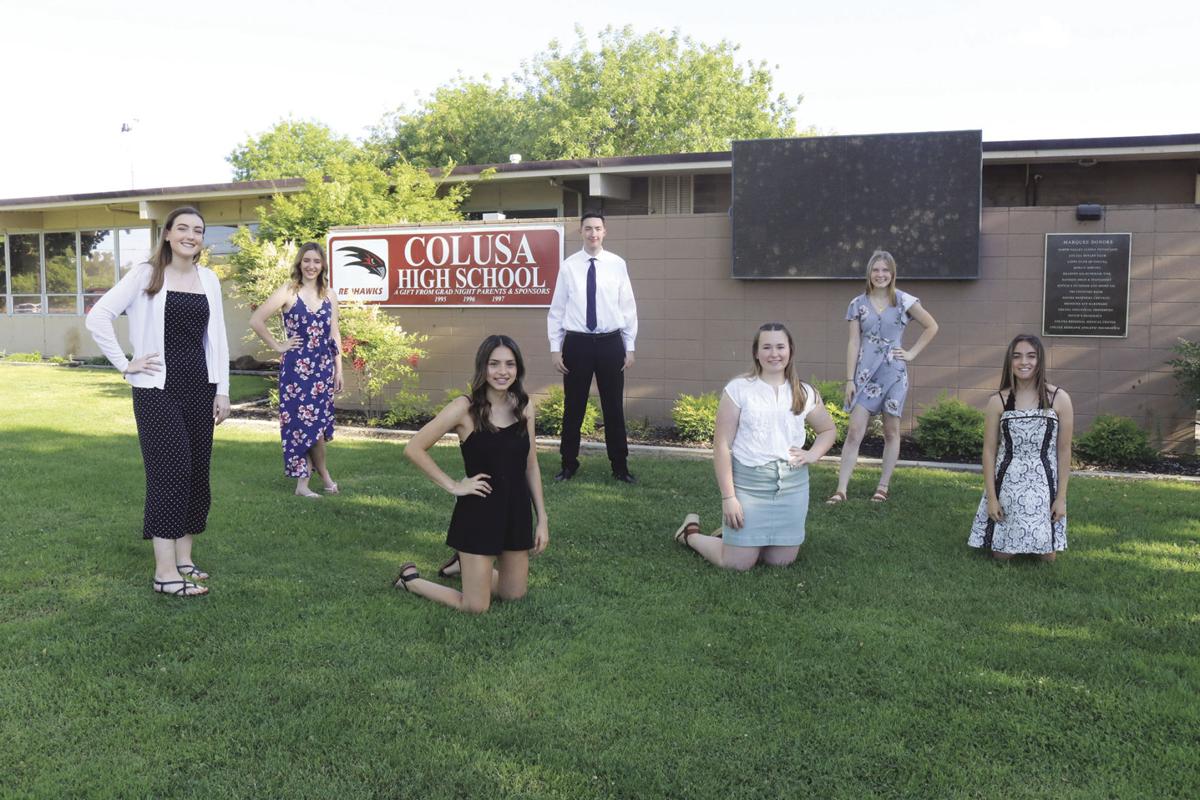 CHS seniors Christian Reyna, left, and Alejandra Melchor Barragan look on as a parade of cars cheer and honk to congratulate them on being among this year’s Super Seven award honorees.

For the last 46 years, the Super Seven Award Dinner has recognized the top seven scholars from the junior and senior classes at Colusa High School.

On Thursday, the 14 honorees and their parents gathered outside of the high school for a ceremony to recognize the students’ accomplishments, but this year’s celebration looked much different than the traditional dinner due to the current restrictions on social gatherings.

With signs and balloons in hand, a parade of cars cheered and honked as they made their way past the honorees lined up along the sidewalk.

Members of the Torchbearer Gamma Chapter of Beta Sigma Phi, who have organized the event for the last 22 years, decided to switch up the format of this year’s ceremony to ensure that the students received recognition for all of their hard work.

According to Sorority member Irmalee Schumacher, each honoree received a Certificate of Excellence and each senior also received $150 to help with college expenses.

After the parade, the senior honorees joined Colusa High School principal Josh Mason in the gym for a very condensed version of the traditional format.

“The juniors don’t even get to go in,” said Schumacher. “Hopefully things will be back to normal next year and they will be able to participate.”

The Colusa Women’s Club started the award dinner tradition in 1975 to encourage academic scholarship among the students in Colusa. Since taking over the tradition in 1998, Beta Sigma Phi teamed up with the Soroptimist International of Colusa County until 2015 to co-sponsor the event. For the last four years, the Sorority has co-sponsored the event with the Colusa Lions Club, who would traditionally prepare the dinner.

The 2020 Super Seven seniors honored for their academic excellence are:

Edgar Cruz Vasquez is the son of Timoteo Cruz and Florencia Vasquez. His main interests in school are math and art. Vasquez is a member of the Colusa Youth Advocates for Change and the Environmental Science Academy, Upward Bound, the Art Club, the Entertainment Club, the Independent Living Program and is president of the Spanish Club.

Vasquez plans to attend the University of California, Santa Cruz where he will major in Bimolecular Engineering and Bioinformatics. He hopes to graduate in four years and then join the STEM workforce.

Olivia Jarrett is the daughter of Deanna and David Jarrett. Jarrett’s main interest in school has been personal finance and she is looking forward to putting these skills to use after graduation.

Jerrett has been on the tennis team for all four years of high school and has been active in FFA, serving as both Chapter vice president and president. She has also been a member of CSF, ESA, and ASB.

After graduation, Jarrett will be attending Cal Poly San Luis Obispo to major in Agriculture Communications. She intends to pursue a career in Ag Finance or Sales.

Chaena Laux is the daughter of Jacob and Shannon Laux. Her main interests in school are sports, science and Environmental Science Academy.

Laux has been active in tennis and basketball, Art Club and tutoring while in high school.

She plans to attend Cabrillo Junior College in Santa Cruz and work toward a career within the Environmental Science field.

Annalise “Annie” Lay is the daughter of Jenny and Eric Lay. Her main interest in school is English.

Lay has been active in volleyball, basketball, and softball. She is a also a member of ASB, Vice

President of FBLA and Yearbook Editor.

Lay plans to attend Pasadena City College where she will play volleyball and study Business Administration. Eventually she will transfer to a four year university.

Bailey McCarty is the daughter of Dino and Kimberly McCarty. She has enjoyed bringing the student body together for school activities through leadership roles she has taken on throughout high school, including her participation in the Environmental Science Academy, Future Business Leaders of America and Associated Student Body.

She will be attending the University of Nevada, Reno in the fall where she will major in Pre-Nursing. She plans to graduate with a Bachelor of Science in Nursing. After becoming a Registered Nurse, McCarty plans to continue her education and become a Nurse Practitioner.

Alejandra Melchor Barragan is the daughter of Andres Melchor and Mirna Barragan.

Her main interests in school are math and Environmental Science Academy.

She is the publicist for the Spanish Club, a member of Colusa’s Youth Advocates for Change, the Art Club and a tutor.

Christian Reyna is the son of Jose and Savina Reyna.

His main interest in school is science, especially biology and chemistry.

Reyna has been a member of ASB for three years and served as vice president this year.

He has been active in FBLA all four years of high school, serving as various officers for three years including Chapter president this year. He has been in ESA for three years and he is a four year member of California Scholarship Federation in addition to playing several sports throughout high school including tennis, football and track and field.

In the fall, Reyna will be attending University of Nevada Reno as a Pre-Nursing major with the goal of obtaining a BSN degree. Later he plans to become a Nurse Practitioner.