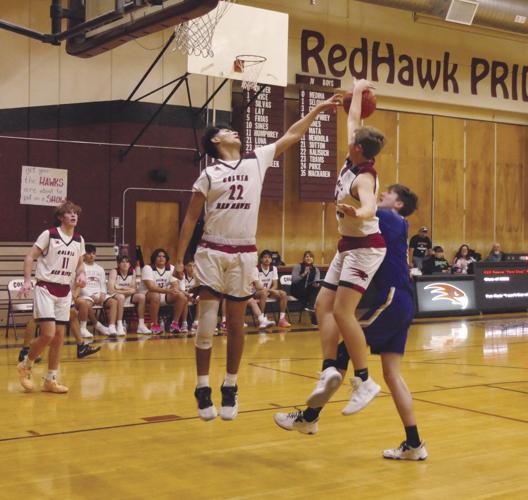 Colusa High sophomore Isaiah Travis (22) is helped with a block on a Sutter shot during the RedHawks’ 71-41 win at home over the Huskies Thursday night in Colusa. 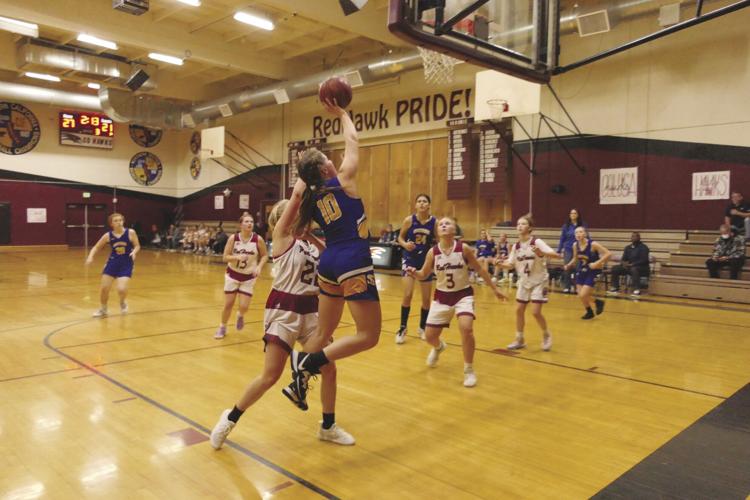 Colusa High sophomore Isaiah Travis (22) is helped with a block on a Sutter shot during the RedHawks’ 71-41 win at home over the Huskies Thursday night in Colusa.

Like several teams around the area, the Colusa High boys basketball team was struggling to fill out a lineup card due to a record number of absences for COVID-related issues.

So Colusa head coach Brian Davis dipped into the junior varsity pool and pulled out a trio of stars that have transitioned well to the varsity level.

Colusa sophomores Isaiah Travis, Payton Humphrey and Seth Kalisuch were on full display Thursday in a home doubleheader with the varsity girls. The boys followed up the girls win with a resounding 71-41 victory over Sutter to get to 10-7 on the year.

“I have been waiting for the sophomores to come up,” Davis said. “We were down to seven players at one point (so) we started plugging in players. (This) is a great win going into the second round of league.”

Colusa jumped all over Sutter in the opening quarter, leading 16-5 at one point.

Sutter, which was led by a trio of players with nine points apiece including top scorer Amrin Mann, immediately responded with a corner 3 from Garrett Fishell that started a quick 7-0 run to bring the first-quarter deficit back down to a manageable situation. The Huskies then played their border-town rival even in the second and trailed 31-24 at the break.

Colusa kept the pressure up in the third, extending the lead back to double-digits on one of the team’s eight 3s to push it to 40-29.

After a quick bucket from Sutter, Colusa answered with a couple more long-range 3s from Payton Humphrey and Kalisuch. Then showing his range as a player, Payton Humphrey found Hunter Sines on the baseline and the senior made it 53-38 to end the third.

Bhatti said while Colusa was deadly from the perimeter all night, the key was the RedHawks’ drive.

“They definitely made shots, but what I am more impressed by is their energy,” Bhatti said. “You are going to make shots, you’re going to miss shots, but your energy can’t drop … They play hard.”

Colusa extended its lead to 20 early in the fourth and 30 a short time later to wrap up its fourth straight win over Sutter.

Sophomore Naseem Bhatti and senior Trevor Eck tied Mann for the team-lead in scoring with nine.

The Huskies are scheduled to return to Butte View League play Tuesday for a 7:30 p.m. game at Wheatland.

Down 10-4 after one quarter, the Colusa varsity girls team rallied with a 15-point second period to get back into the game and eventually overtake Sutter at home, 49-42.

Freshman Danica Chavez poured in 20 points on a trio of 3s, while senior Reese Roper provided 14 and senior Abby Myers added 10 and a couple 3s for Colusa (11-6).

Sutter, which fell to 7-10 on the year, received a game-high 21 points from Kaylee Duncan.

Duncan provided most of the offense, including 10 in the fourth to keep the Huskies within reach of pulling off the road win.

But with Chavez converting at the free-throw line in the fourth and Roper adding eight points down the stretch, Colusa held off Duncan and Sutter for the victory.

Colusa is at Durham Monday for a 7 p.m. scheduled league contest. Sutter returns home to host Oroville in BVL play at 7:30 p.m. Monday.

Game schedules are subject to change.