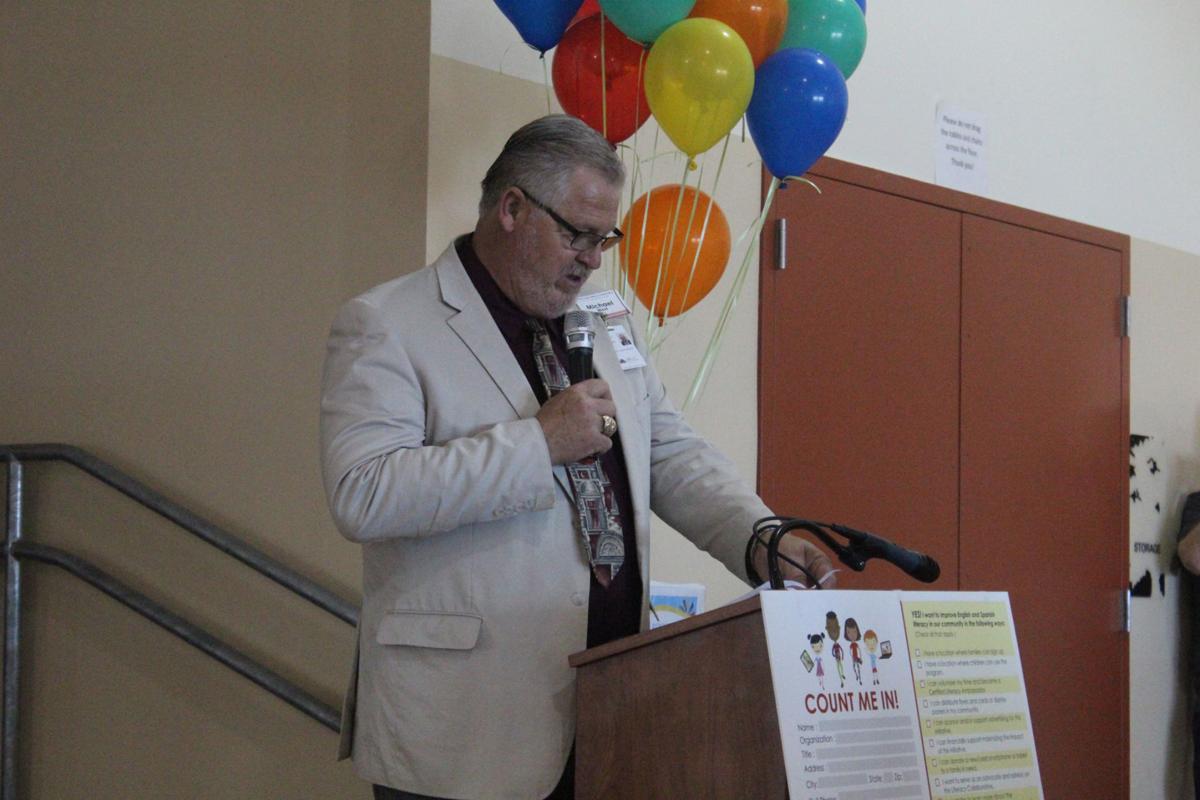 Colusa County Superintendent of Schools Mike West rolls out the Footsteps2Brilliance program for the general public at the Education Village in Williams last week. 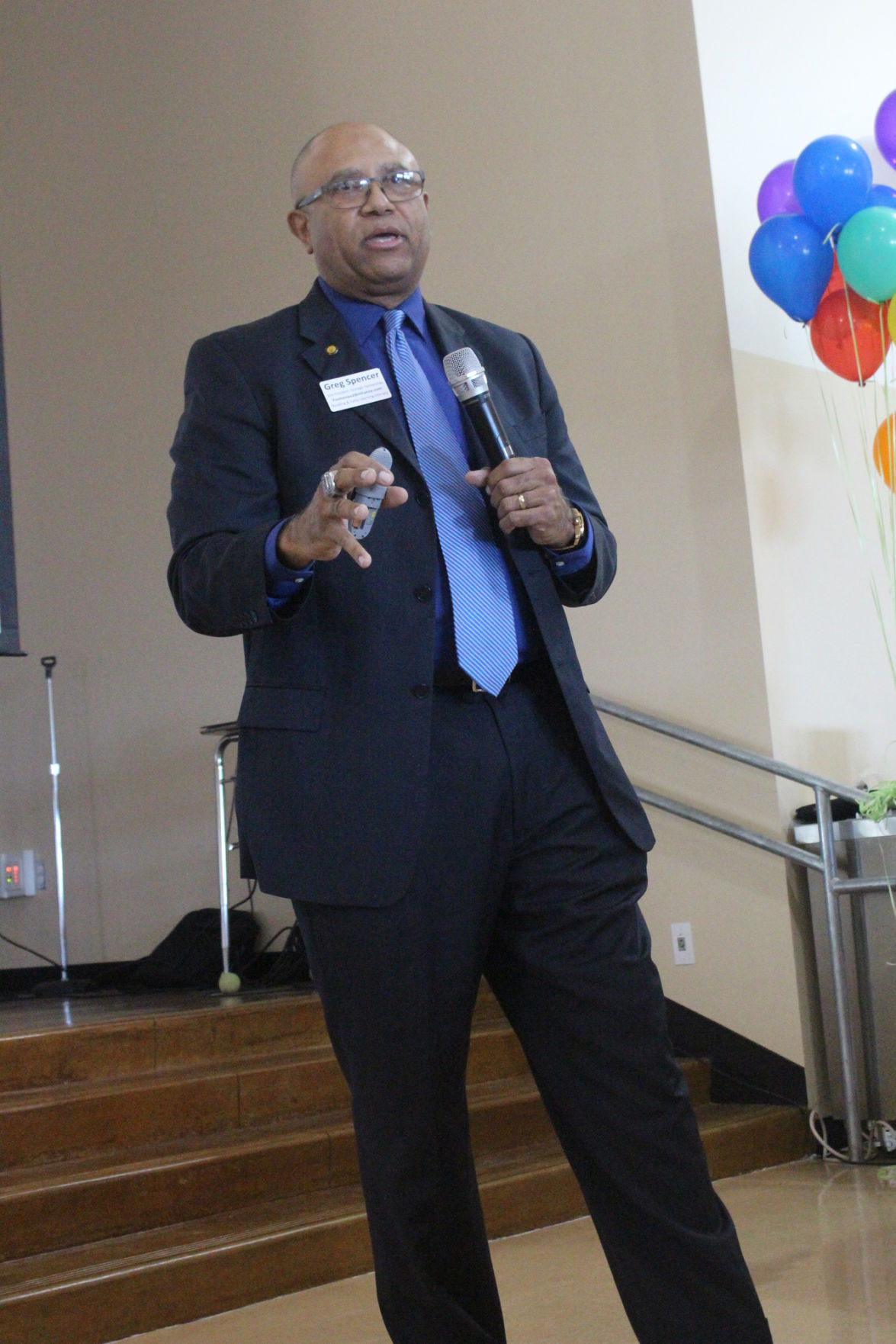 Greg Spencer, F2B Vice President of Strategic Partnerships, discusses the benefits of the F2B program during the community meeting in Williams last week.

Colusa County Superintendent of Schools Mike West rolls out the Footsteps2Brilliance program for the general public at the Education Village in Williams last week.

Greg Spencer, F2B Vice President of Strategic Partnerships, discusses the benefits of the F2B program during the community meeting in Williams last week.

Colusa County is the second-least literate county in California, as an estimated 34 percent of residents over the age of 16 lacked basic prose reading skills in 2003 — according to the most recent statistics available from the National Center for Education Statistics.

That's something that isn't lost on those in the county who are tasked with educating its residents — and a new program at the Colusa County Office of Education will look to tackle the issue through an early learning, bilingual solution known as Footsteps2Brilliance, which targets children from birth to 5 years old and from pre-kindergarten through third grade using a learning platform based in mobile technology.

"The biggest thing that we want to get out there is that this is an innovative, exciting and fun program to get parents and kids back involved in reading, and especially to get kids to be proficient in English and Spanish," Colusa County Superintendent of Schools Mike West said. "When you look at dual language and computer immersion, kids are like sponges; their ability and capacity to learn is astounding. That's why people are encouraged to learn a second language at an early age — they retain it."

The best part about the program? It's free for Colusa County residents.

The program is a national initiative and supported by the White House, and Colusa County was selected as a group of only 12 communities in the state — known as Legacy XII Innovators — to qualify for the Footsteps2Brilliance Early Learning Literacy Equity Access Grant, amounting to $5 million.

"This literacy grant allows us, with your help, to support all learners with a special emphasis on serving our Latino, African American and underserved children and families," Colusa County Superintendent of Schools Mike West said in a letter asking for the community's support.

The grant essentially gives every resident in Colusa County — no matter his or her age — access to the Footsteps2Brilliance app, which includes more than 1,000 English and Spanish books, songs and games.

The hope, West said, is that the initiative will help the county's children become proficient readers of English and Spanish by the second grade.

It's not only a powerful learning tool, it is also a powerful evaluative tool. Footsteps2Brilliance allows educators to track the progress of students as they complete activities ranging from reading stories, to nursery rhymes, to writing their own stories and more.

"The fact that you're able to pull up all of this information so quickly is a credit to the program and how powerful it is," West said. "Just the tool of being able to see how kids are doing — it's just amazing. And it just goes to show you, too, how much these kids love reading. If people take the time, especially when you mix in music and interactive elements — it just makes a huge difference."

Footsteps2Brilliance Vice President Greg Spencer gave a presentation to the community members gathered at the Education Village in Williams last Wednesday and spoke with the Sun-Herald prior to doing so.

"The communities we work in, it's very selective," Spencer said. "There are only 12 districts or counties in the state. We are excited to be here."

Spencer said Colusa County was selected for a number of reasons, including its demographics and the leadership in place at the County Office of Education.

"This was the type of community, with the rural migrant population, that the White House was looking for," Spencer said.

What makes such a program a good fit for Colusa County, especially with those population demographics and in mind?

According to Spencer, it is the fact that 80 percent of people own smartphones or other devices today — and people who are lower on the socioeconomic scale are actually more likely to own more technology.

"80 to 90 percent of the U.S. has smartphones. The other 10 percent, we're in the process of addressing that," Spencer said. "There are many ways we are mitigating that situation."

Those efforts include drives for old smart phone donations, which Colusa County is informally accepting now.

"We're also concerned about leadership. If you didn't have the leadership of Mike West and the others here, we wouldn't be talking. When I talked with Mike, it became clear that he was here to take no prisoners," Spencer said.

He added that Napa County Superintendent of Schools Barbara Nemko, who was an early user of Footsteps2Brilliance in the state, referred him to Colusa County.

Looking at the numbers

The results from Napa County have been astounding — so much so that West had a hard time believing some of them when he first heard about the program at a superintendents conference.

At just one month of using the program at 15 minutes per day, for example, there was an observed seven-month increase in reading comprehension improvement. Napa County also experience significant gains on the Peabody Picture Vocabulary Test.

While West initially was skeptical, he is now a believer and is optimistic that the program will bring similar results to Colusa County.

"It's kind of scary when you look at (the literacy rate). How can we be that low when we spend so much money on it?" West said. "We have to start them early. We all wish we had a crystal ball for this, but all I can do is point to the successes in other counties, such as Napa County."

West added that while it was a powerful program, the ultimate success is dependent upon the parents.

"This is going to give them an opportunity to have their kids establish a foundation for reading," West said. "Every parent wants their child to do better and have better things than they did. Our kids look at us as models. If a kid has parents that read, they're likely to read as well. Read with your children — parents have to be involved, be the lead, and be the model. The foundation starts with family and parents at home."

Colusa County has a five-year window to use the program to improve literacy among its youth, West said, and if successful, the CCOE hopes to continue the program after that.

"The data doesn't lie: we'll see what the statistics say. From the start, we've seen some pretty impressive statistics. That's a testament to the program."

Since rolling out the program in the Maxwell and Williams School Districts, kids have read nearly 425,000 words and 1,7000 books.

"We rolled this out Tuesday of last week in Maxwell. Just in the short timeframe, they have read 576 books and accumulated 173,000 words read… it's amazing," West said. "The least we can do is prepare our kids to do well, and especially read well. And it's fun to see too."