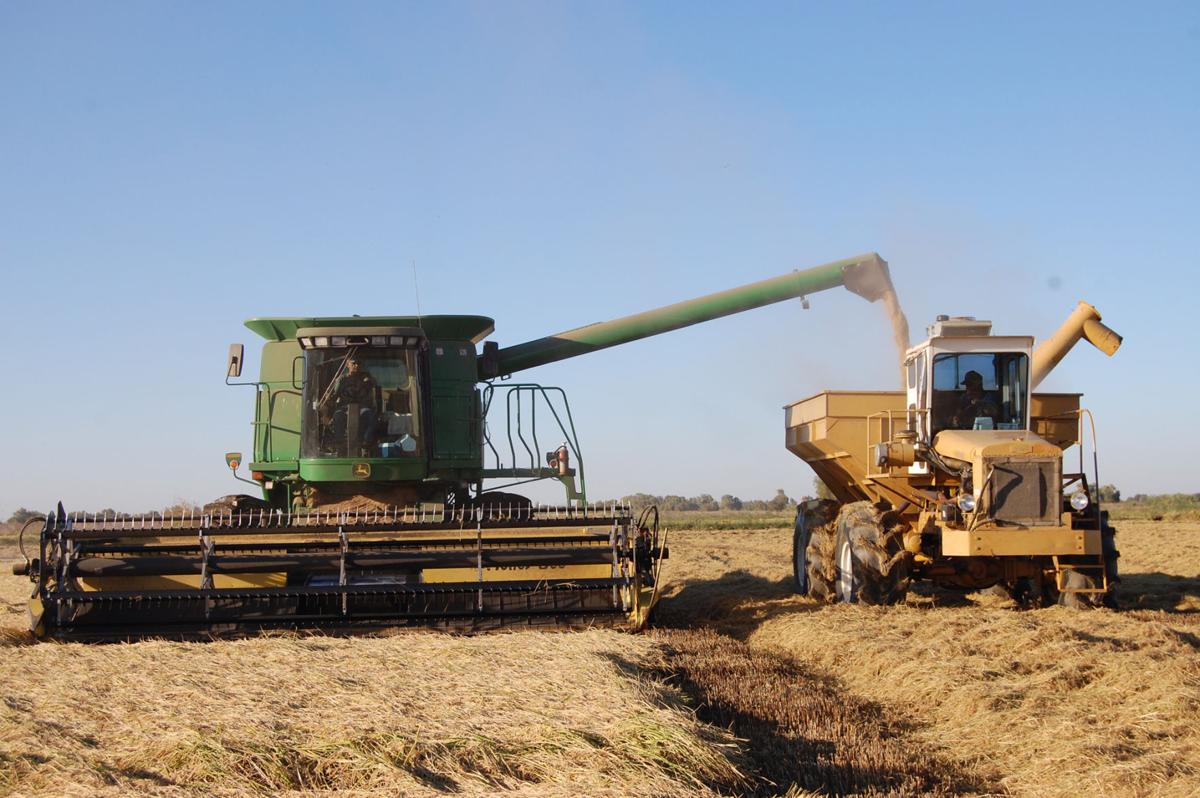 Jean Pierre Urruty, left, from Basque Country in France, reaps, threshes, and winnows rice in a single pass over flat fields of thick forage in Delevan on Saturday in a John Deere CTS combine, before depositing the grain into the hopper of a partnering bank-out wagon. 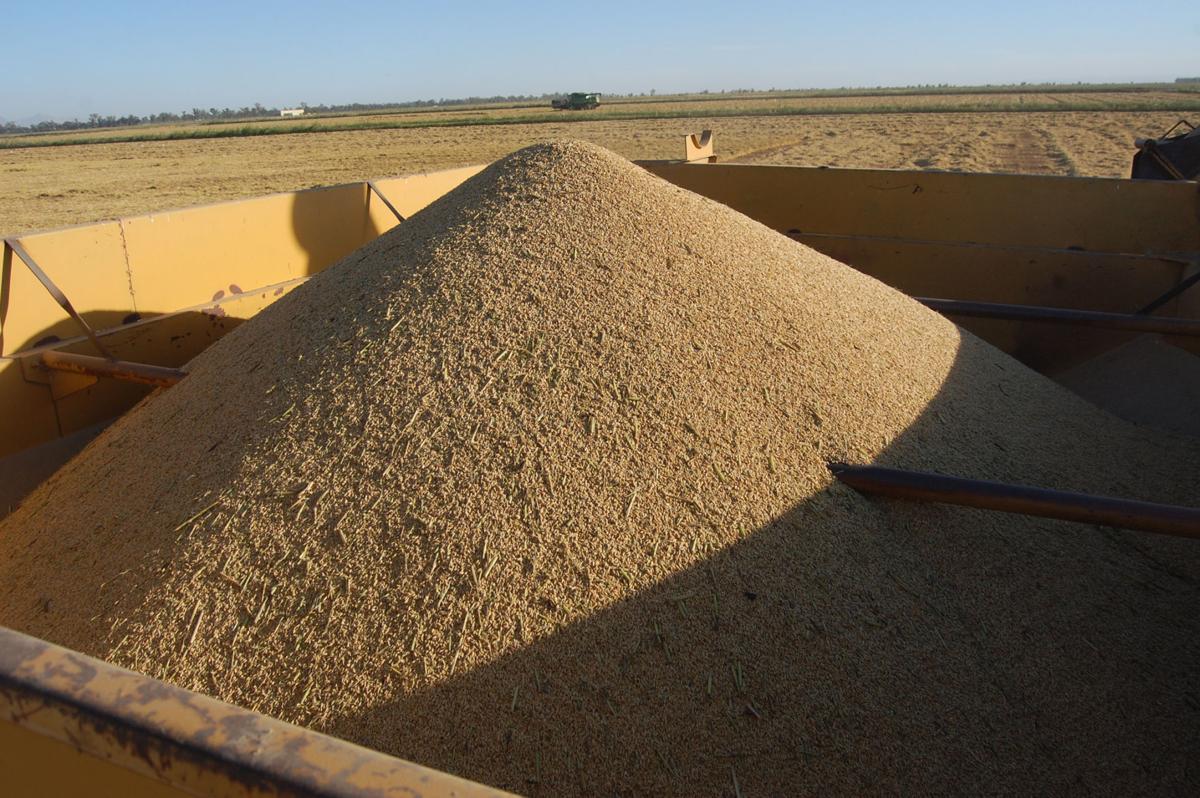 A hopper full of freshly harvested rice will makes it way to Ridgetop Warehouse for drying before milled, polished and sold as the No. 1 food staple in countries around the world.

Jean Pierre Urruty, left, from Basque Country in France, reaps, threshes, and winnows rice in a single pass over flat fields of thick forage in Delevan on Saturday in a John Deere CTS combine, before depositing the grain into the hopper of a partnering bank-out wagon.

A hopper full of freshly harvested rice will makes it way to Ridgetop Warehouse for drying before milled, polished and sold as the No. 1 food staple in countries around the world.

Jean Pierre Urruty is no stranger to hard work.

The 61-year old farmer is used to 14-hour days spent growing and harvesting corn for animal fodder and raising sheep and cattle on his 250-acre ranch in Barcus, a small village in the mountainous Pyrénées-Atlantiques region of southwestern France.

Traveling from Basque Country to Maxwell last week, Urruty had one purpose in mind — to sit at the controls of a John Deere CTS combine, reaping, threshing and winnowing rice with a force unmatched by any machine he has ever seen in the old country.

It was his first trip to the U.S. or just about anywhere outside his homeland, Urruty said through an interpreter, Pierre Etcharren, a Maxwell farmer originally from the Iparralde — the north side of Basque Country on the border with Spain.

"I am so happy to be here," Urruty said, after working in the fields from dawn to dusk on Saturday. "This is a once-in-a-lifetime opportunity."

Although a small amount of rice is grown in France for local consumption in the sparsely populated Camargue region near the Rhone River, the Basque people until recently had a misconceived image of rice cultivation in America — including California — where rice production is more advanced than anywhere else in the world.

To the Basque and, in fact, most Europeans, rice cultivation brought to mind the practices of the Montagnards — the highlanders of Vietnam — wearing broad-brimmed rattan hats to protect their faces from the tropical sun, and often seen bent at the waist in knee-deep wet fields, with baskets strapped to their waist, and sowing seeds by hand or weeding ripening rice while foraging for edible plants and fish.

"They thought we were out here poking the ground with sticks and throwing the seed in," said Etcharren, who invited Urruty to California for the harvest.

Of course, that mistaken image of rice cultivation by French and Basque people changed dramatically in July, after a French television documentary aired in Europe that followed Basque people who emigrated from the old country to forge new lives in America.

A portion of the documentary was filmed in Maxwell, and featured Etcharren, who came to California from Basque Country when he was 17.

The documentary was filmed in April when the skies over Etcharren's flooded rice fields were abuzz with canary-yellow airplanes, including Maxwell pilot Rick Richter's Schweizer Ag-Cat, as he zoomed through the air before swooping down to just a few feet above the ground to deposit rice seed into the water below.

"I was amazed watching the airplanes seed the rice," said Urruty, who contacted Etcharren via the Internet after watching the program. "It was fascinating."

Not only did the television program impart to the Basque and French people a very different view of the Central Valley's $5 billion rice industry, it inspired Urruty to make a pilgrimage he never imagined possible.

He left his daughter in charge of his farm — tending his cattle and sheep — so that he could fly half way around the world from Paris to San Francisco, just to spend a few weeks as a guest in Etcharren's home and harvest rice as part of his crew.

"This is a dream come true," Urruty said. "My family was happy to see me go, because I never go anywhere. The last time I was in an airplane was in 1969."

In the past week, Urruty said he has learned how quick and efficient just a few people working together can harvest an abundance of grain, as it moves from the combine to the bank-out wagon, and then to a nearby truck and trailer to be transported to Delevan's Ridgetop Warehouse, considered the most modern and efficient rice dryer in the state.

Before he returns home next week, Urruty plans to tour California Heritage Mills to see how the rice is processed and stored, and will take home with him an understanding of large-scale farming operations — so very different in comparison to the modern, but nevertheless small agricultural enterprises of the Basque County.

Looking over Etcharren's vast rice land, Urruty experiences great pride in the success the Basque people have found in this area.

Although not as many Basque families settled in Colusa or Glenn counties around the turn of the 20th century as the Portuguese, Maxwell's French Basque farmers like Larry Urrutia, Mike Polit and Allen Etchepare, their fathers and their grandfathers, along with Pierre Etcharren have contributed greatly to the area's agriculture economy.

For more than 30 years, Etcharren has farmed about 1,000 acres of rice in Delevan, the outpost community about 10 miles north of Maxwell.

Urrutia farms about 600 acres of rice.

In addition to rice, Mike Polit produces award-winning organic extra virgin olive oil made from Arbosana olives, and Allen Etchepare, of Emerald Farms' Seeds by Design, in Maxwell and Willows, produces diverse vegetable and herb seeds for the commercial and home garden trade.

Although Urruty said he hopes to someday see California (Calrose) rice in every grocery store in Basque Country, he knows his greatest memory of his visit will be bringing in the harvest.

"It is something I will probably never get to do