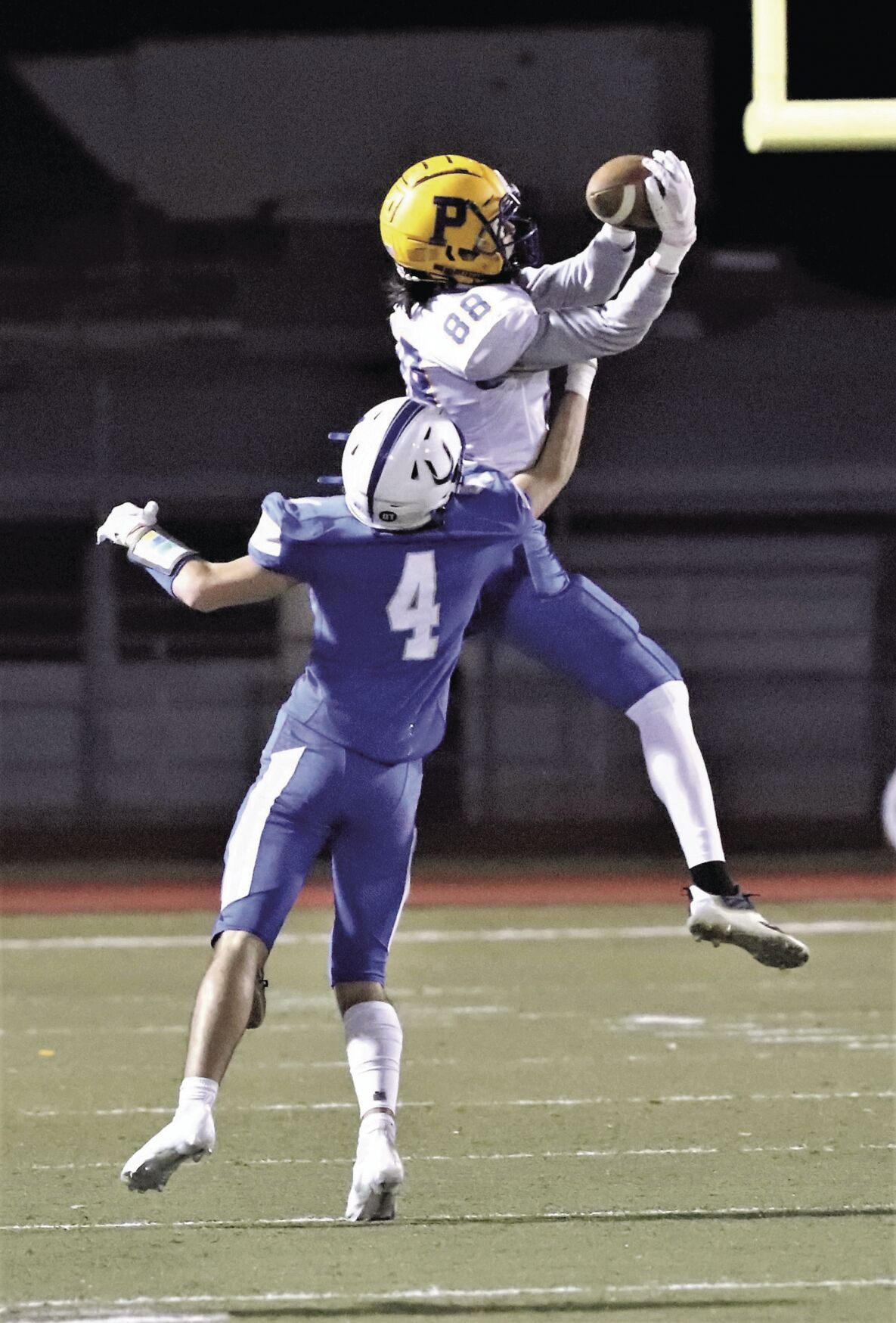 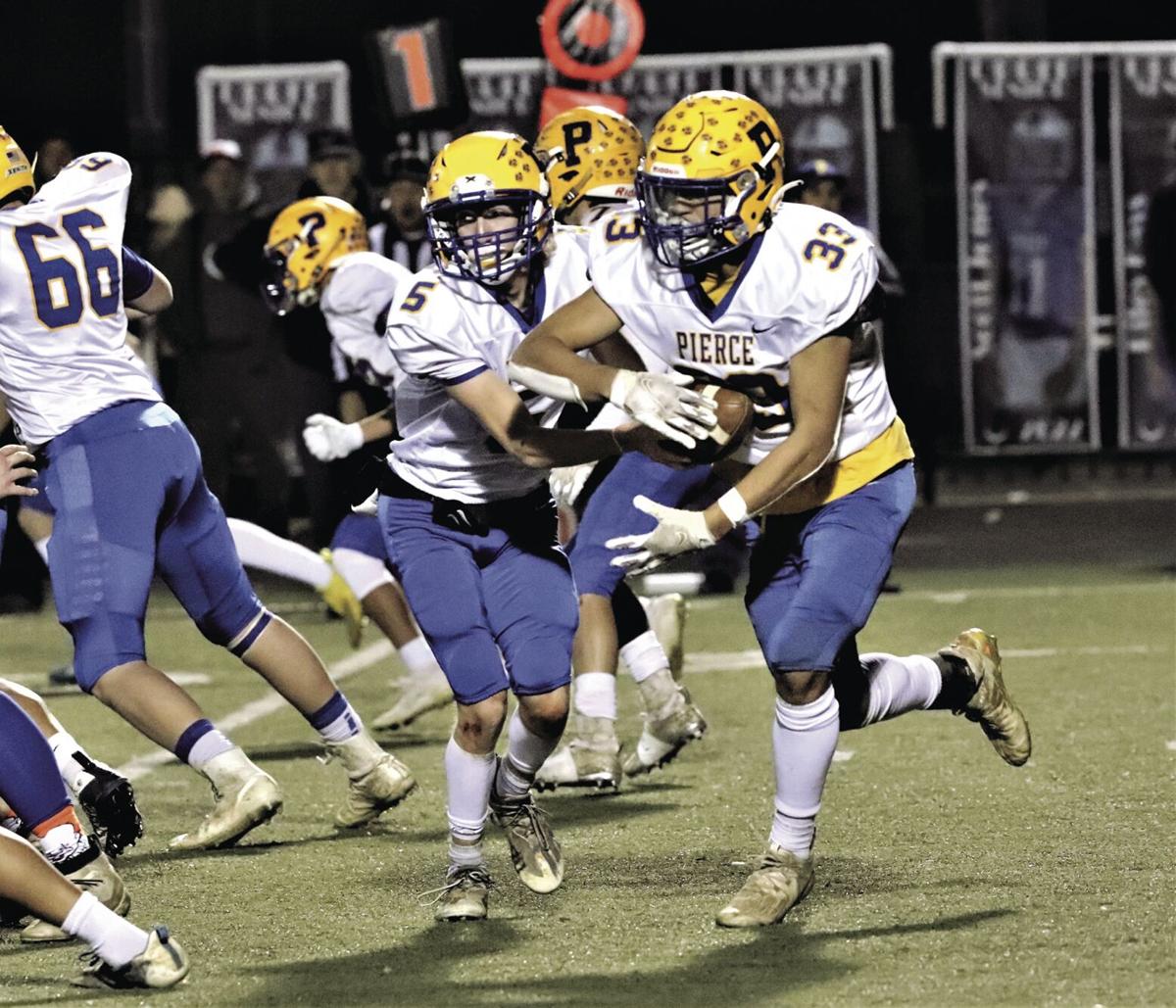 Manuel Lopez (33) runs the ball for the Bears Wednesday during the NorthernSection Division IV championship game at University Prep in Redding.

Manuel Lopez (33) runs the ball for the Bears Wednesday during the NorthernSection Division IV championship game at University Prep in Redding.

University Prep senior quarterback Payton Henderson looked up at the clock as the third quarter began with his team trailing against Pierce of Arbuckle in the CIF Northern Section Division IV title game at home on Wednesday night.

“We’re letting this one slip through our fingers,” Henderson was overheard saying on the sidelines.

Pierce turned the first half into a grimy battle for possession with its double-wing run offense. The Bears’ defense pressured U-Prep’s offense into committing turnovers and penalties that were uncharacteristic of the Panthers during their 12-game winning streak.

But Henderson smiled as he clicked on his helmet and needed just one throw to regain the swagger his team had shown on offense this whole season.

Henderson threw a 48-yard touchdown pass to the back shoulder of senior wide receiver Scotty Jones and U-Prep’s offense exploded for 21 points in the second half to beat Pierce 27-7 and capture its first CIF Northern Section Division IV title in football.

U-Prep will find out this Sunday which division it will play in for the CIF state playoffs.

“We’re definitely on the rise and we’re no longer that nerd prep school,” senior running back Carter Abel said. “People are starting to take notice and so is this town.”

U-Prep (13-0) accomplished its goal of winning a championship that was preceded by the arrival of former Enterprise coach and three-time CIF Northern Section champion Darren Trueblood in 2018.

Trueblood, the architect of the “We Not Me” tradition followed by schools in Redding, was due to coach this season before being suddenly diagnosed with cancer at the beginning of 2021. Trueblood passed away on Feb. 17.

Longtime assistant coach Dustin Fortenberry, a protege of Trueblood’s, was named head coach of U-Prep before the start of the 2021 spring season.

U-Prep under Fortenberry played a style of football that prided itself on execution, discipline and consistency. A recipe that has allowed U-Prep to win its past 16 games, since falling to West Valley on April 2.

“Dustin is a replica of Coach Trueblood,” senior wide receiver and linebacker Jones said. “He believes in the same principles and it all flows over.”

Henderson threw three touchdowns and ran to lead U-Prep’s offense after struggling in the first half against Pierce.

Pierce (9-4) utilized its run game and assertiveness at the defensive line to slow the tempo of the game in the first half.

Pierce junior Keith Grimmer scored the first touchdown of the night with 54.8 in the first quarter. U-Prep had two chances to score before halftime, but were turned away because of pressure from Pierce’s defensive line.

Senior defensive end Brandon Saavedra recovered a fumble with 2:43 in the second quarter and the Bears blocked a field goal attempt by U-Prep senior Wyatt Miles before halftime.

“I’m super proud of these guys and we had to wait a long time because of COVID-19 and we were ready,” Pierce coach Anthony Tapia said. “It’s tough to let these guys go because they’ve worked so hard to get here but credit to U-Prep. They were super fast, they played resilient and they never changed course.”