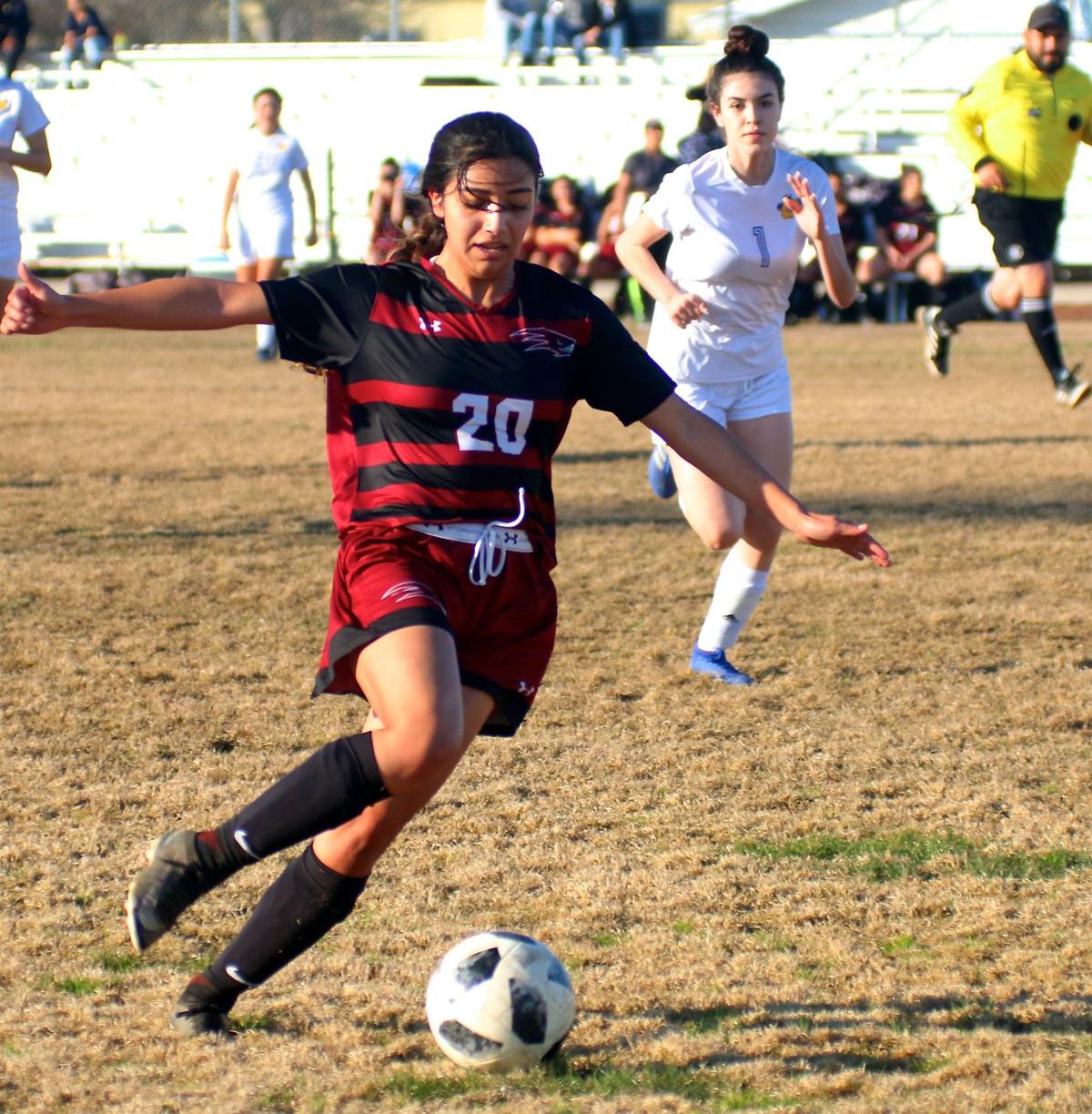 Colusa’s Destiny Ramirez centers a ball in the RedHawks’ match with Pierce on Jan. 31.  Ramirez recorded a hat trick in the 9-0 win. 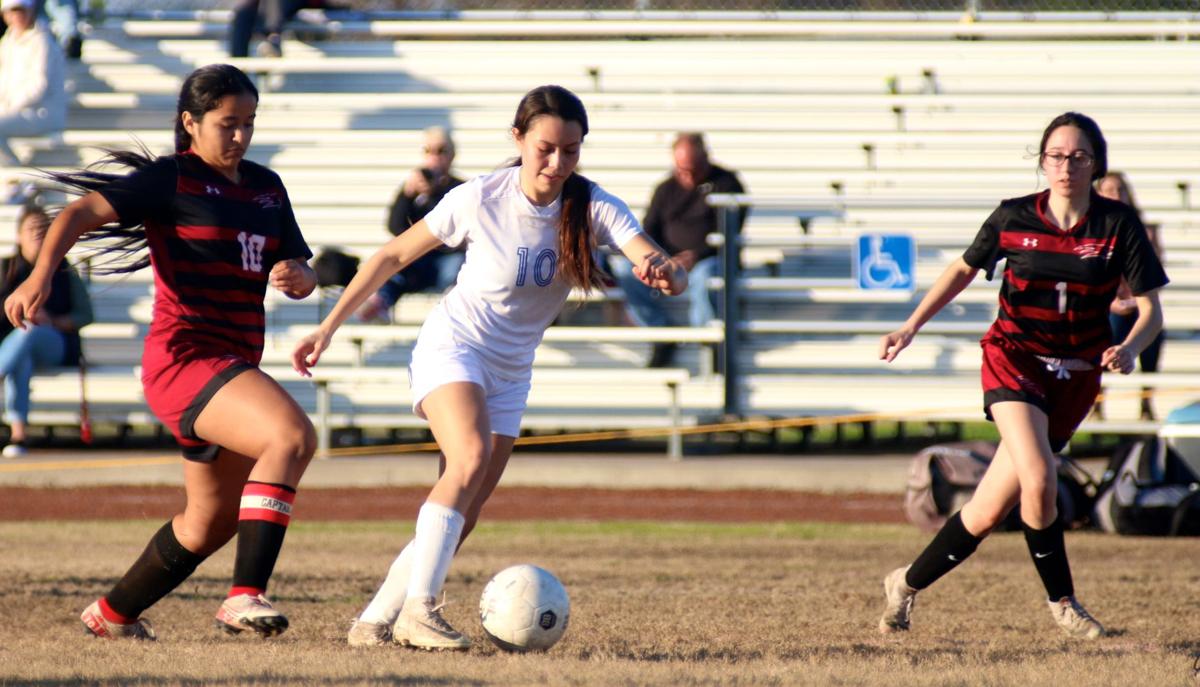 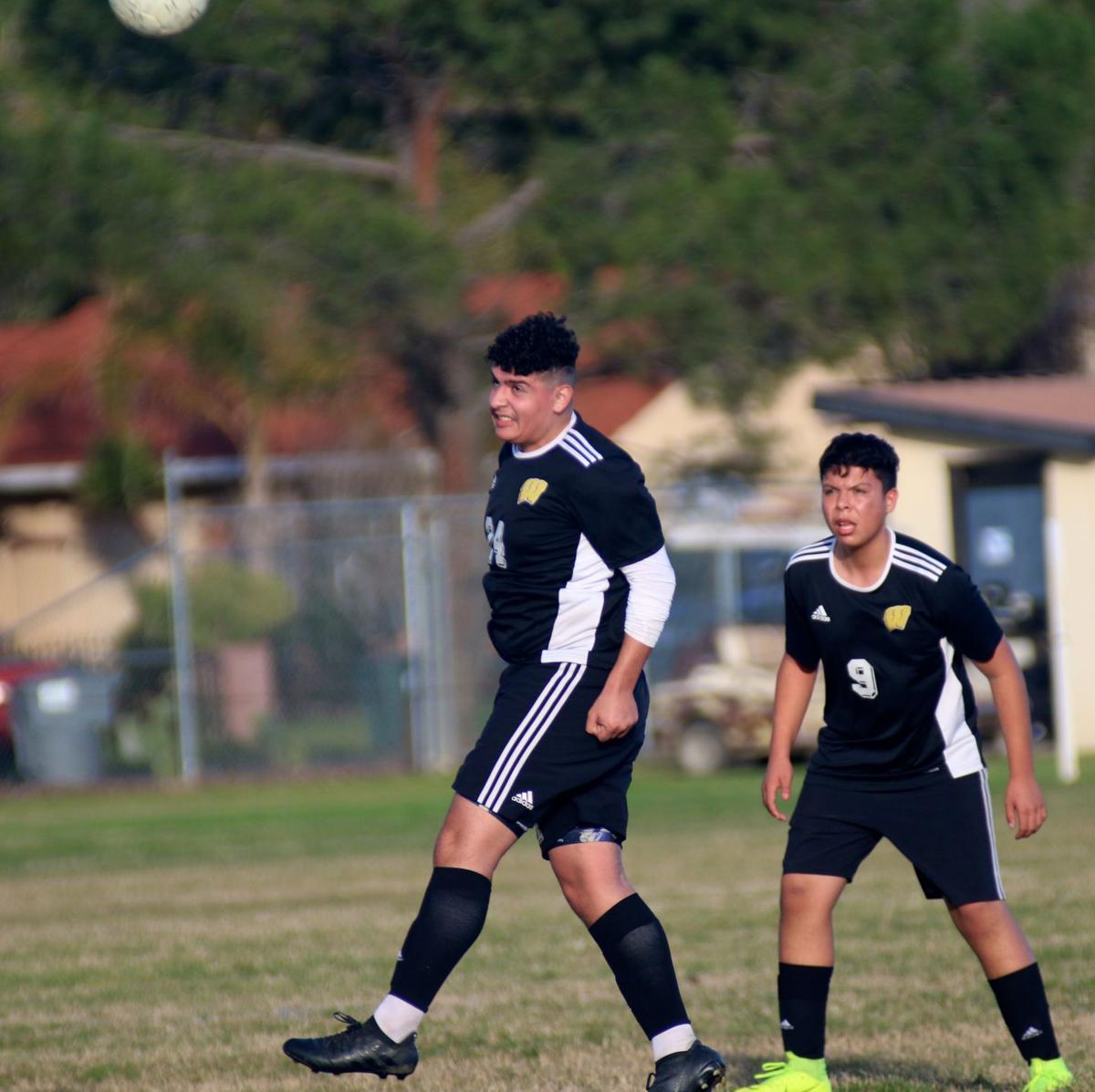 Williams High’s Emi Navarro heads a ball forward in the Yellowjackets’ match with Durham as Francisco Guzman looks on.  Navarro scored a goal in the ‘Jackets’ 4-0 win over Durham on Jan. 28.

Colusa’s Destiny Ramirez centers a ball in the RedHawks’ match with Pierce on Jan. 31.  Ramirez recorded a hat trick in the 9-0 win.

Williams High’s Emi Navarro heads a ball forward in the Yellowjackets’ match with Durham as Francisco Guzman looks on.  Navarro scored a goal in the ‘Jackets’ 4-0 win over Durham on Jan. 28.

On the pitch last week, the Colusa boy’s soccer team won the week with three triumphs while the Williams boys also had a strong showing earning two wins. However, the rest of the county teams finished with mixed results.

Three shutout victories last week kept the RedHawks atop the Sacramento Valley League standings and extended their win streak to five games as they continued to play the stingy defense, which has been their hallmark this season.

In their first game last week, while goalkeepers Diego Avila and Andres Lopez combined to shutout Willows, the offense came through as well where five first-half goals, four off the foot of Victor Hernandez, the Northern Section’s leading scorer, and one by Ulises Galvan propelled Colusa to win.

Things got a little more difficult on the road in Live Oak last Wednesday, but a goal in the 36 th minute by Alejandro Rico and another by Hernandez in the 76 th minute was more than enough to lift the RedHawks over the Lions.

Returning home to play the rival Bears in a night cap last Friday, Hernandez got the RedHawks started delivering a goal right before intermission off an assist from midfielder Rodrigo Rodriguez, then followed up with his second of the match in the final minutes converting a pass from Edgar Garcia.

On the season, midfielders Galvan, Garcia, Rodriguez and Dominic Garcia have each had a big hand in setting up the Colusa offense in addition to aiding fullbacks Jesus Hernandez, Andy Lopez, Darien Sarabia and Nico Lopez in keeping opponents from getting easy shots on goal.

Also having a good year has been Avila, the RedHawk starting keeper, who has recorded seven shutouts.

Colusa (15-1-2, 13-1-2) had a match with winless Redding Christian on Tuesday and is scheduled to play Los Molinos at home on Thursday.

Last week was a successful one for the ‘Jackets as they picked up two relatively easy Sacramento Valley League wins.

Despite numerous chances, Williams went scoreless in the first half against the visiting Trojans, but came back after intermission to put four in the back of the net.

Emiliano Navarro got the Yellowjackets on the board first then goals from Arturo Ornelas, Mauricio Morales and Francisco González followed as they cruised to a win.

In goal Heder Gentil kept a clean sheet to record the shutout.

Williams remained on a roll in Willows for their second game last week as Morales and Gerry Gomez both registered hat tricks while Axel Velazquez scored once.

Gentil turned away 13 shots in the win.

This week is a taxing one for the ‘Jackets (7-5-3, 7-5-2) as they had a match with Pierce in Arbuckle on Tuesday before returning home to square off against Winters on Thursday.

After a forfeit win over Durham, the Bears got four second half goals to down Redding Christian, but could not put a ball in the net against the RedHawks and suffered a defeat on the road.

No statistics were provided by Pierce (11-5, 10-5) who hosted Williams on Tuesday then travels to Hamilton City on Thursday.

Amber Morales and Rylee Reading provided the two RedHawk goals in the narrow victory over the visiting Honkers last Tuesday, but Colusa couldn’t do much on the road in Live Oak the following day as it fell to the fell to the first place Lions.

To conclude the week the RedHawks were ungracious hosts as they shutout Pierce in dominating fashion.

Leading the way for Colusa was junior Destiny Ramirez who recorded a hat trick, although there was plenty of offensive support as Morales and Reading tallied two goals while Wendy Navarro and Gisselle Espindola each added one.

Williams continued to play competitively last week finishing with two ties against teams to which they had previously lost.

Gaby Lopez and Jocelyn Paiz each found the back of the net against the Honkers on January 28 while Emily Cano accounted for the lone goal against Willows off an assist from Brisa Garcia.

The Bears (1-10-1, 1-9-1) were shutout in their only game last week but is back at it this week having hosted Williams on Tuesday before hitting the road on Thursday to take on Hamilton City.