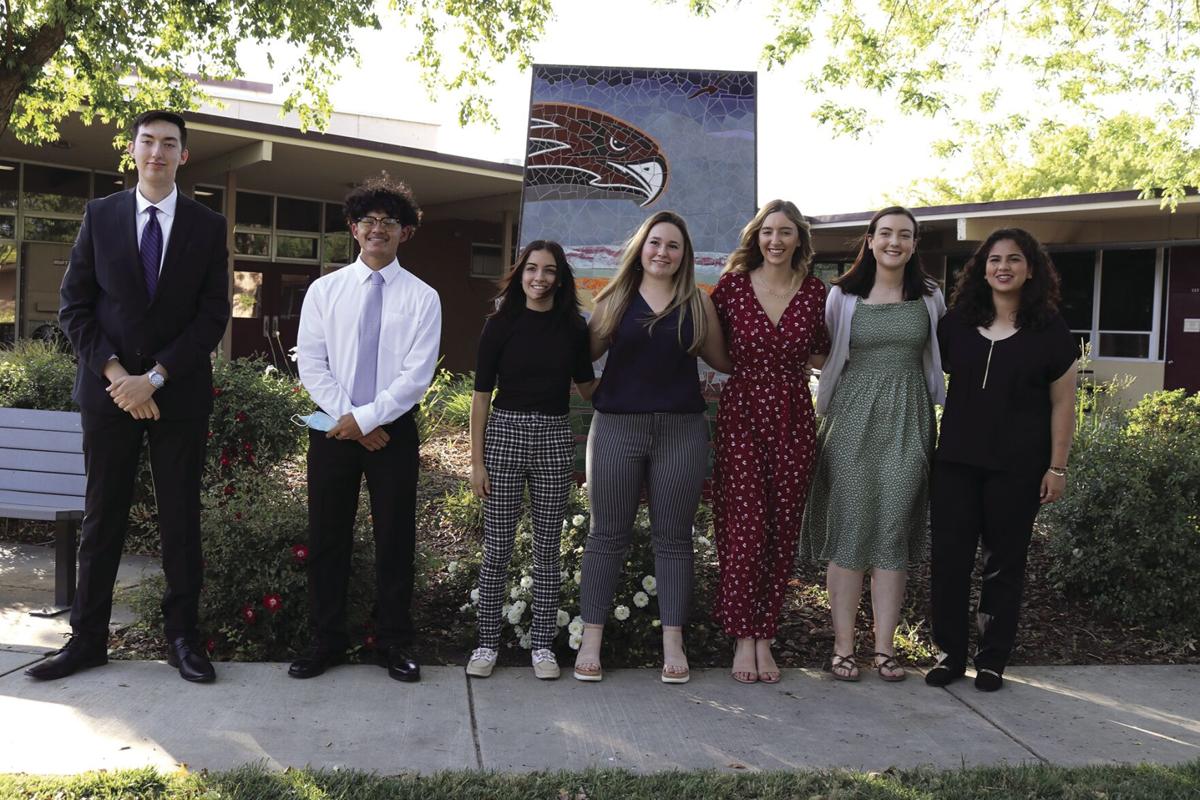 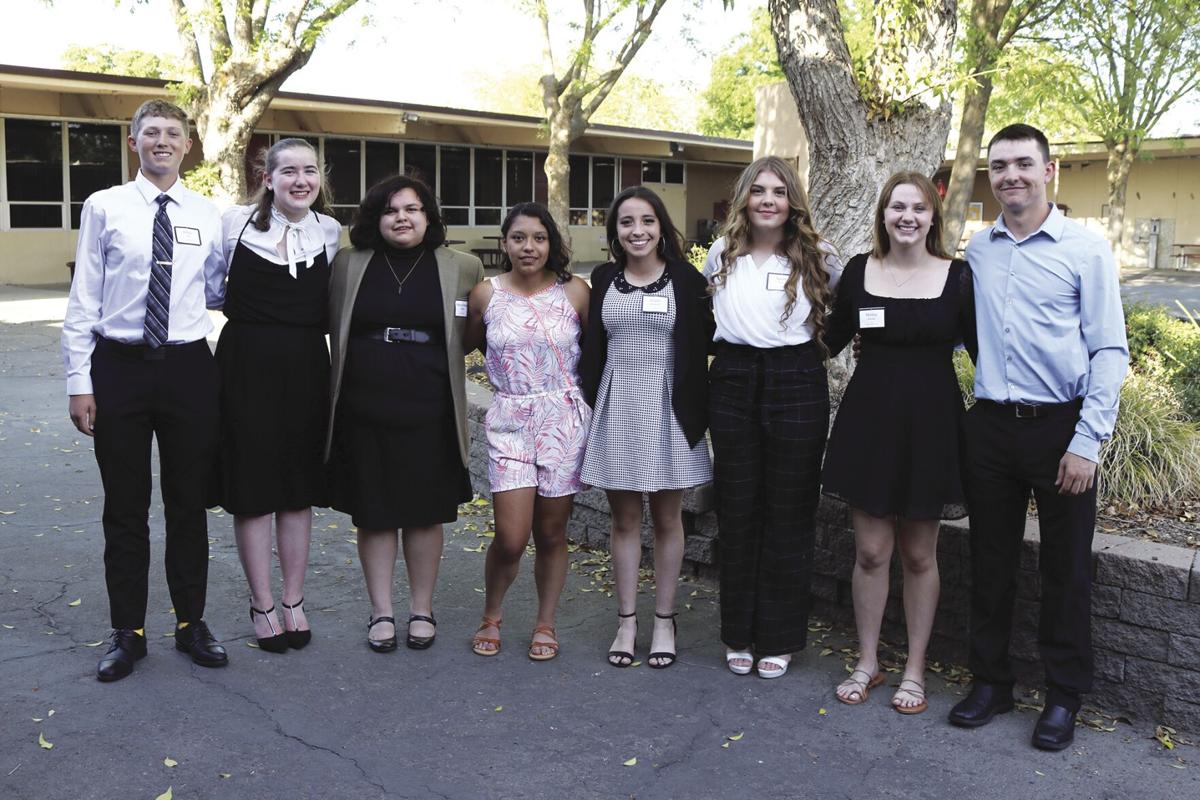 For the last 47 years, the Super Seven Award Dinner has recognized the top seven scholars from the junior and senior classes at Colusa High School.

On Monday the tradition continued, as 15 honorees and their parents were acknowledged for their efforts during a ceremony held in the Colusa High School gymnasium.

This year’s meeting was not exactly the event the Torchbearer Gamma Chapter of Beta Sigma Phi, who have organized the event for the last 23 years, usually host – since many COVID-19 guidelines including masks and social distancing were still in effect – but it was a welcome return to a somewhat traditional ceremony after the group facilitated a drive-by ceremony last year.

The meeting included a short program where Beta Sigma Phi president Sue Rasmussen and Rebecca Changus, interim principal of Colusa High School, recognized the achievements of these students during an especially challenging year.

Each student was present with a Certificates of Achievement during the ceremony and seniors also had the opportunity to speak at the ceremony to pay tribute to their most influential teacher.

According to Rasmussen, the Colusa Women’s Club started the award dinner tradition in 1975 to encourage academic scholarship among the students in Colusa and the sorority took over organizing the event in 1998.

The 2020 Super Seven seniors honored for their academic excellence are:

Emily Cerney is the daughter of Mike and Cindy Cerney. She has played tennis all four years of high school and is captain of the team this year, in addition to serving as president of the FBLA Chapter, a member of ASB, the dance committee, CSF and ESA.

Cerney pushes herself academically by taking difficult classes and likes to cook and bake during her free time.

In the fall, Cerney plans to attend Cal Poly, San Luis Obispo, where she will major in History.

She said she is grateful for her parents support and feels honored to be a Super Seven Scholar.

Cerney recognized her math teacher, Kim Olsen as her teacher of influence.

Edgar Garcia is the son of Luis and Martha Garcia. Garcia is a member of ASB, FBLA, ESA CSF, Spanish Club, band in addition to playing several school sports including football, soccer, baseball and cross country. He has received multiple All Conference Awards in sports.

While busy with school and extracurricular activities, Garcia also finds time to hold a job at Sav Mor Foods in Colusa.

He also plays several instruments, including guitar, saxophone and ukulele and named music teacher Michael Phenicie as his teacher of influence.

After graduation, Garcia plans to attend Cal Poly in San Luis Obispo, where he will major in Computer Engineering.

Samantha Gonzalez is the daughter of Rocio Gonzalez. Gonzalez is a member of the Art and Spanish clubs and plays several sports including soccer, tennis and golf.

She also enjoys music and writes lyrics as well as poetry,

Gonzalez plans to attend a four year University in the future to major in Visual Communications and pursue a career as a graphic designer.

Casey Medina is the daughter of Ruby and Manny Medina. She has found science classes to be most interesting during her high school years. Outside of the classroom, she is a member of FFA, Spanish Club, FBLA, ESA, CSF and also plays several sports including cross country, cheer, basketball, track and golf.

Medina recognized Gay Seaver as her teacher of influence.

Medina will be attending the University of California, Davis in the fall and plans to earn a Bachelor’s Degree in Biology before pursuing a career as a dentist.

James Murray is the son of Ira Murray. His main interests in school have been history and science, especially physics and biology.

Murray has been active in FBLA and CSF for the past four years as well as a member of the Spanish Club for the last two years.

Outside of school, he enjoys reading, playing basketball and watching art films.

His teacher of influence is English teacher Matt Giffin.

Murray plans to attend UC Davis to study Biological Sciences and hopes to continue on to medical school to become a pediatrician.

Abigail “Abbie” Smith is the daughter of Asa and Tisha Smith. Her main interests in school include science and extracurricular activities.

Throughout high school, Abbie has been a three sport athlete, participating in cross country, track and field, softball, tennis, cheerleading and basketball. She has also been a member of ESA, FBLA, ASB, CSF, Spanish Club and 4-H.

Smith plans to attend a four year college and earn a Bachelor’s of Science in Nursing before becoming certified as a travel nurse.

Kelsea Whiting is the daughter of Shawnte Bice and Emit Whiting. Her main interests in school include government and political science.

Whiting is the current California Future Business Leaders of America State president and has served as a state officer for two years and a section officer for three years.

Outside of school, Whiting has her own photography business and is also a direct sales representative for a company called Origami Owl.

Whiting said she strives to be a force for good and to make a difference in her community.

Next year, Whiting plans to attend an out of state four year university, where she will major in political science.