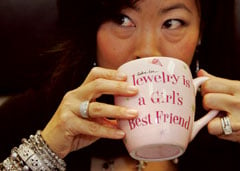 SHE’LL DRINK TO THAT: Cookie Lee’s mug, filled with green tea, says it all and is certainly true for her. 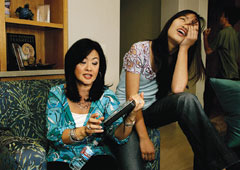 SHE’LL DRINK TO THAT: Cookie Lee’s mug, filled with green tea, says it all and is certainly true for her.

In a showroom, behind a plain door in a vanilla office park, the Cookie sisterhood is going gaga. The creator of the eponymous line of costume jewelry that is sold in a growing number of living rooms across the country is making a surprise appearance.

Cookie Lee – black and white and pink all over and shimmering with 12 bracelets on her right wrist alone – is greeted like a rock star as she walks into the showroom in Irvine, where sales consultants stock up on her latest creations.

Cookie hugs a consultant. She hugs another. She hugs everyone in the room.

A consultant asked Cookie what to buy for a home party/ bridal shower.

Cookie’s advice can be worth a lot.

Cookie (real name: Debra Lin) not only has enriched herself through her booming party-plan jewelry business, but also hundreds of independent sales consultants – some of whom regularly earn a monthly income near $30,000.

High-performing consultants – all but a handful are women – score free family cruises to places such as Alaska, Hawaii and Cancun. More than 60 have earned $45,000 Mercedes-Benz cars.

The consultant snatched up the earrings at 50 percent of retail.

Like all Cookie Lee consultants, she will earn 50 percent of every item she sells – at home parties, while conspicuously carrying her official Cookie Lee tote bag at the mall, while covering herself in jewelry for a trip to the grocery store.

Like the other 40,000-plus active Cookie Lee consultants nationwide, she does this in the hopes of hearing the magical words: “I just love your necklace. Where did you get it?”

Cookie (a childhood nickname) is chilling at her two-story, waterfront home in a gated community in Newport Beach with her husband and children, Steve, 16, and Katie, 14.

“I prefer to stay at home and relax,” Cookie said. “I’m always running around, like a chipmunk.”

The 50-year-old mother’s rapidly growing business allows her to be both a business mogul and a doting mom – which is the whole point.

Cookie loves to tell the story of how her parents, who immigrated to the United States from China in 1948, were too busy to spend much time with her and her brother, now an engineer.

“I walked to school alone with a house key dangling on a chain around my neck,” Cookie wrote in the company magazine, Cookie Connection, which is filled with photos of her and top-producing consultants and inspirational quotes such as, “If you don’t paddle your own canoe, you don’t move.”

Cookie respected the hard work of her parents but grew up a bit resentful. She became determined to be a more attentive mom.

It’s working – and so is her business.

The mass-marketed jewelry has struck a chord with busy moms who want to look fashionable but don’t want to drop big bucks on earrings, bracelets and necklaces.

“There are many pieces she sells that are appealing,” said Beth Harnick-Shapiro, 45, of Irvine. “That said, I’m not a big costume jewelry fan. I prefer custom-made jewelry that is genuine.”

More than a direct-sales jewelry business, Cookie Lee has morphed into a philosophy, a way of life. Successful members of the Cookie sisterhood attain the financial freedom to spend more time doing what they want.

“You can’t get time back,” Cookie said of her desire to leave a $150,000-a-year corporate job 15 years ago to launch her business because she was spending too much time at the office.

“What this company has given me,” Cookie said between sips of green tea, “I want to give to other women.”

Pattie Proehl is one of those women.

The 46-year-old mother of three and survivor of a brain tumor sits down for coffee around the corner from her home.

She speaks softly and appears to be anything but the pushy, ingratiating person many assume are typical of the direct-sales biz.

For businesses such as Cookie Lee and Mary Kay Cosmetics – a $2.3 billion makeup empire that operates in much the same way, selling goods directly to consumers – the name of the game is moving merchandise at “home shows.”

Consultants scramble to get relatives, friends and friends of friends to show up and drop cash for Cookie Lee items, almost all of which cost less than $40 apiece.

The key for consultants such as Proehl is not only to personally sell a lot of Cookie Lee jewelry, but also to recruit other salespeople to work under them. These recruits are key to a consultant making a lot of money, since she will earn 5 percent to 12 percent commission on the items sold by those who sign up to be a part of her team.

Martha Redfearn has referred 74 saleswomen to the company. Overall, she has in her stable more than 3,000 recruits – which explains her March commission check of $29,234.

“You need to devote some time to the business every day – even if it’s just a few hours,” Redfearn said.

Proehl likes to hold theme parties. She calls one “PMS,” for pizza, movies and social.

Proehl, like Redfearn, has achieved one of the highest titles of national director (the ultimate is executive national director). She has about 1,400 active consultants – many of whom she’s never met.

Proehl’s commission check in March, for working about three hours a day, was $23,955.

“The jewelry sells itself,” said Proehl, who met Cookie 10 years ago at a preschool gathering at a church.

Proehl was a teacher. She started selling the jewelry while spending time with Cookie at a church retreat in Denver.

Of course, not every consultant achieves the success enjoyed by Proehl, Redfearn and other superstar saleswomen.

“You have to have a goal and a system in place to achieve that goal,” said Proehl, who has staged impromptu jewelry shows on airplane flights.

Proehl is Cookie Lee consultant No. 1415 – indicating the order she signed up as a saleswoman. Consultants wear badges with their name and number and sometimes refer to themselves by number.

Some women sell the jewelry as a hobby to make a couple hundred extra bucks every month.

Some sell the accessories part time, meaning they organize about two home shows every week. Others are full-time consultants, hosting three or more shows a week.

All it takes to become a Cookie Lee consultant is an initial investment of about $325. A saleswoman can quit anytime with no penalty.

Angela Jones, 43, of Carson is in a side room at the Irvine showroom, signing up to be a consultant.

The room erupts in smiles, claps, hugs and laughter.

Cookie, who has a vivacious presence and a throaty voice, and who possesses the skill of making anyone she talks to feel like they’re the only person in the room, honed her business smarts in college.

After finishing high school in 1974, she went to the University of California, Berkeley.

She transferred to UC Davis and received a bachelor’s degree in business management and design in 1978. She later got an MBA in marketing and finance from Northwestern University.

She took a beading class for fun and got raves when she wore her creations to work. She started selling items to coworkers after hours.

Convinced she was onto something, she invested $300 in materials and sold more than $8,000 worth of jewelry on the side in 1985. Five years later, she left her corporate job for good.

As her business took off, Cookie realized she needed to teach other women how to book home shows and sell jewelry if she ever were to realize her goal of being able to work and take care of her children.

To this day, she said, she’s never missed a special event or school function for her kids.

Consultants say Cookie’s warm, vivacious personality and accessibility to her sales force are big reasons for her company’s success.

They also say that as chief jewelry designer, her flair for latching onto the latest fashion trends is key.

Wherever she is, Cookie looks for inspiration for new designs. Recently, a dessert at a New York eatery inspired a design for a circular pendant.

The self-described “trendoid” jots down ideas and drawings in a small notebook she carries around, hoping to appeal to everyone from rocker chicks to SUV moms.

“We don’t guess right all the time,” Cookie said, “but we’re pretty good at it.”

The queen of home jewelry sales said her goal is to have Cookie Lee on par with Mary Kay Cosmetics.

She hopes her children eventually take over her business. Steve and Katie already have helped raise money for charitable causes through their mother’s company, including relief for tsunami victims in 2004.

For now, it’s the Cookie Lee show – and she’s all smiles.