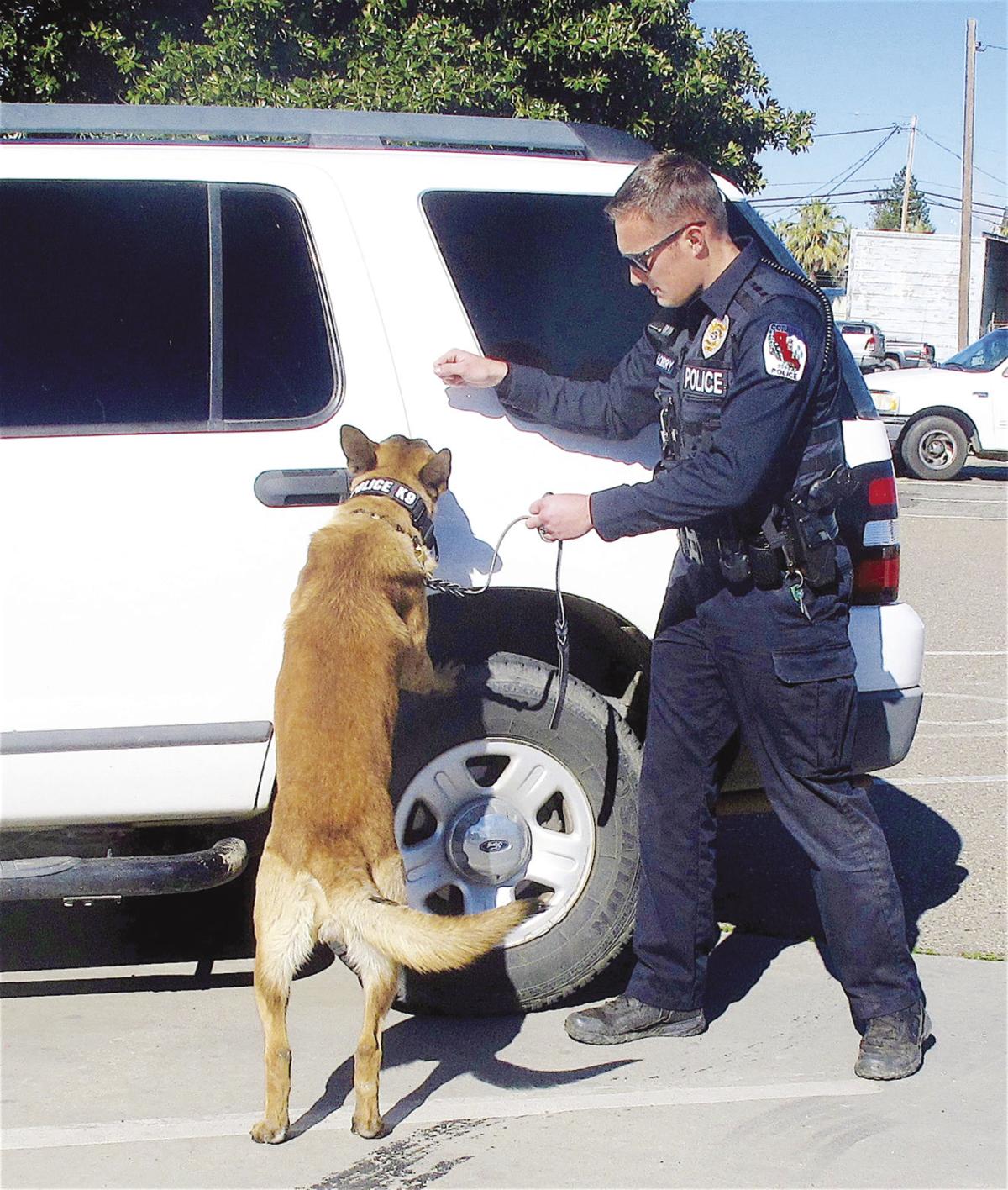 Corning Police Officer Chase Corry and his canine partner, Blaze, conduct a search on a vehicle in Corning. 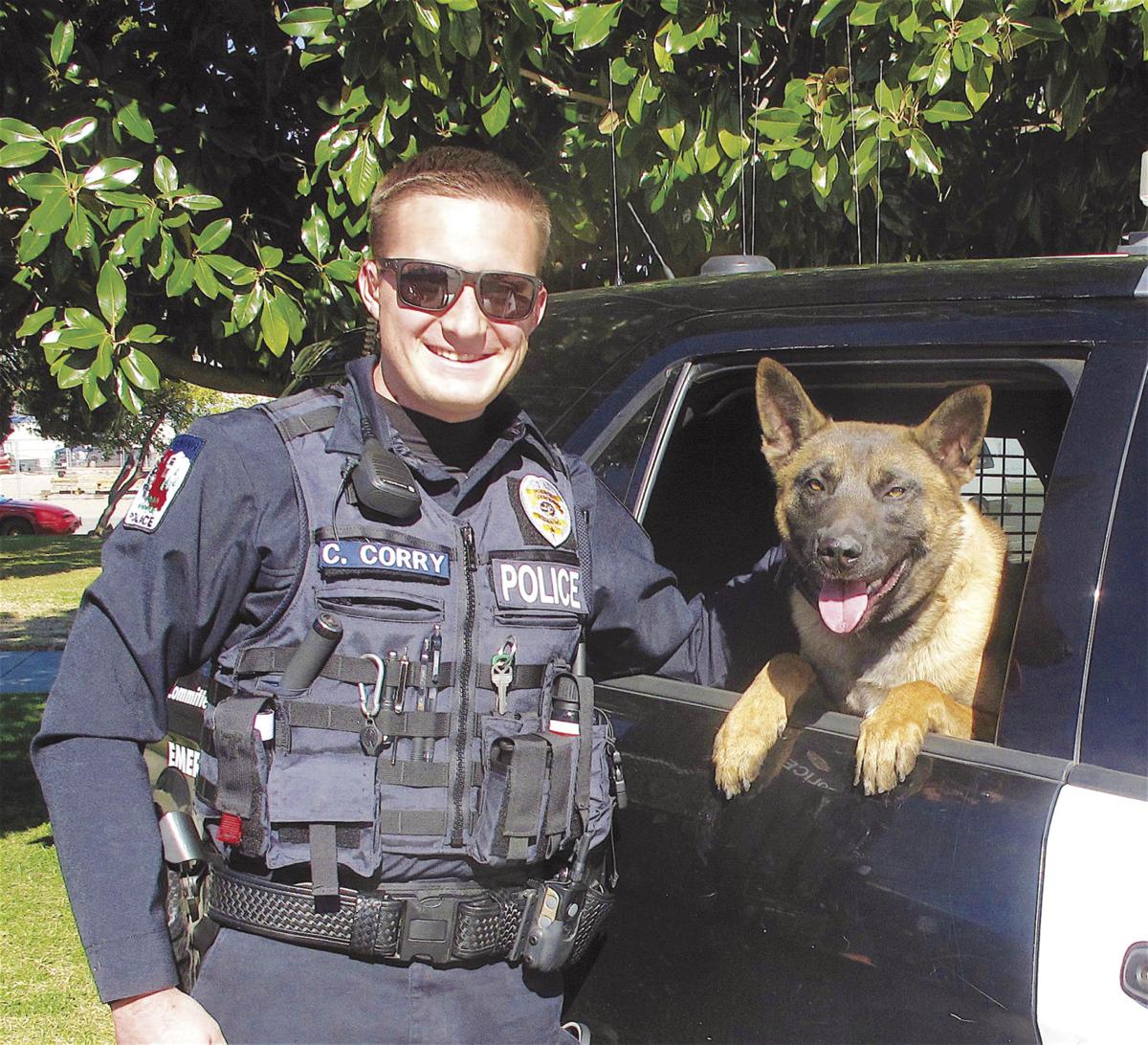 Blaze, the newest officer of the Corning Police Department, pictured with his partner, Officer Chase Corry, has already assisted in making several significant drug busts since hitting the streets a month ago. 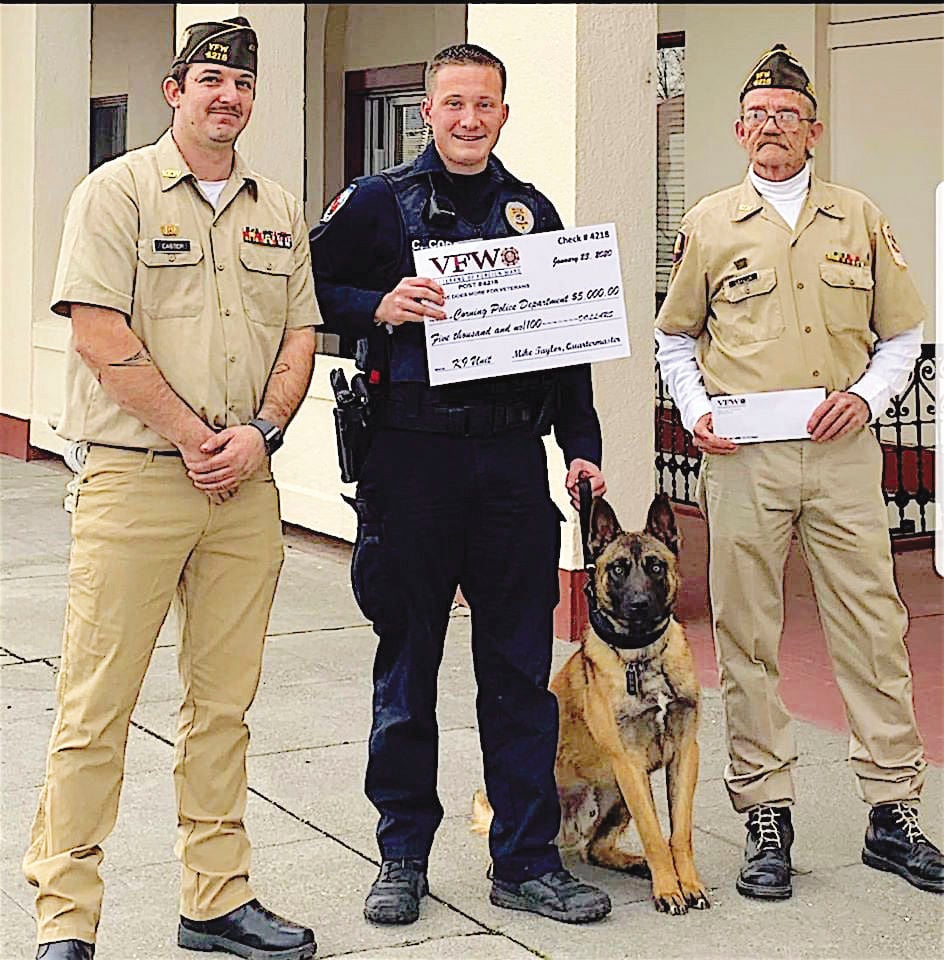 Corning Police Officer Chase Corry and his canine partner, Blaze, conduct a search on a vehicle in Corning.

Blaze, the newest officer of the Corning Police Department, pictured with his partner, Officer Chase Corry, has already assisted in making several significant drug busts since hitting the streets a month ago.

In no time at all, the newest member of the Corning Police Department was making significant drug busts as he hit the streets running – on four legs.

Blaze, an 18-month-old Belgian Malinois, joined the department as the partner of Officer Chase Corry, and after months of training the duo began patrolling the streets of town a month ago.

“Right from the start, Blaze has shown his worth,” Corry said. “During the first week on the job he alerted on a vehicle during a traffic stop.”

The incident occurred when the department received a report of mail theft in the area of Capay and Kirkwood on Jan. 25.

“I made the traffic stop on a vehicle and things just didn’t feel right,” Corry said. “Blaze alerted on the vehicle. That was probable cause to make a search inside the vehicle where I discovered methamphetamine and several pieces of stolen mail.”

The suspects were arrested and booked into the Tehama County Jail.

That same day, as Corry was traveling north on Highway 99W he made another traffic stop, this one on Gallagher Avenue at Houghton Avenue.

“I contacted the driver who turned out to be on parole and was a registered sex offender,” Corry said. “A asked him to get out of the vehicle and Blaze started searching the car.”

Right away, Blaze alerted on the vehicle, on the outside and inside.

Corry started his own search and located a shipping tube in the backseat that contained heroin and methamphetamine.

The driver, Juan Ramon Perez, 48, of Red Bluff was arrested and booked into the Tehama County Jail on a parole hold and four felony drug charges.

Since then Blaze and Corry have made several other illegal narcotic busts and “surrenders.”

“There have already been instances where a suspect chooses to surrender instead of having Blaze come after him,” Corry said. “One suspect wanted on felony warrants was about to run, then he saw Blaze and changed his mind.”

In another circumstance, a man under the influence of a controlled substance attempted to break into the home of a family member. Later that same day he was located on Mooney Court, behaving aggressively and still under the influence.

“He was resisting officers until Blaze arrived and his presence led the man to surrender,” Corry added.

When at home with the Corry family, Blaze just likes to play.

He adds that Blaze has already proven himself to be a real asset to the department.

“Having him as a partner allows me to do my job even better,” Corry said.

Blaze came to the department from the Netherlands at a cost of $12,000. Blaze and Corry attended rigorous and challenging police canine training in Sacrament for several month at a cost of $6,000. That training will continue on a regular basis throughout the life of the partnership.

Blaze is a multi-purpose canine trained in protection, apprehension, patrol, and narcotics detection.

“He is trained to detect methamphetamine, heroin and cocaine,” Corry said.

Corning Police Chief Jeremiah Fears said the City and Police Department are very grateful for the financial generosity of several local businesses and organizations that helped make the acquisition of Blaze.

“There help makes it possible to pay for the training and purchase of equipment,” he added. “We are especially grateful to the Corning Patriots, which back in 2018 raised and donated $20,000 to secure a police canine for the department. Funds donated for the police canine will also be used for regular veterinary care and other costs.”

In addition, Richfield Feed is supplying dog food for Blaze and local VFW Post # 4218 provided the department with a check in the amount of $5,000 to purchase safety gear for K-9 Blaze.

The VFW donation will fund a heat alarm for the police canine patrol car.

“Blaze’s safety is of upmost importance and in the heat of the summer the alarm will ensure the patrol car remains at a safe temperature. We again are taken aback at the overwhelming support and generosity we have received from local organizations and businesses,” Fears said.

Fears, who was partner to the department’s last canine, Oso, said Blaze will have “big paws to fill.”

Oso retired four years ago after serving the department for nine years.

Corry joined the department in 2017. He grew up in Tehama County and graduated from Red Bluff High School.

His first experience in law enforcement was a four-year stint as a Tehama County Sheriff’s Explorer. He joined the U.S. Air Force following high school graduation and served as a military police officer for four years.

Corry was named the Corning Police Department’s Officer of the Year in 2019.