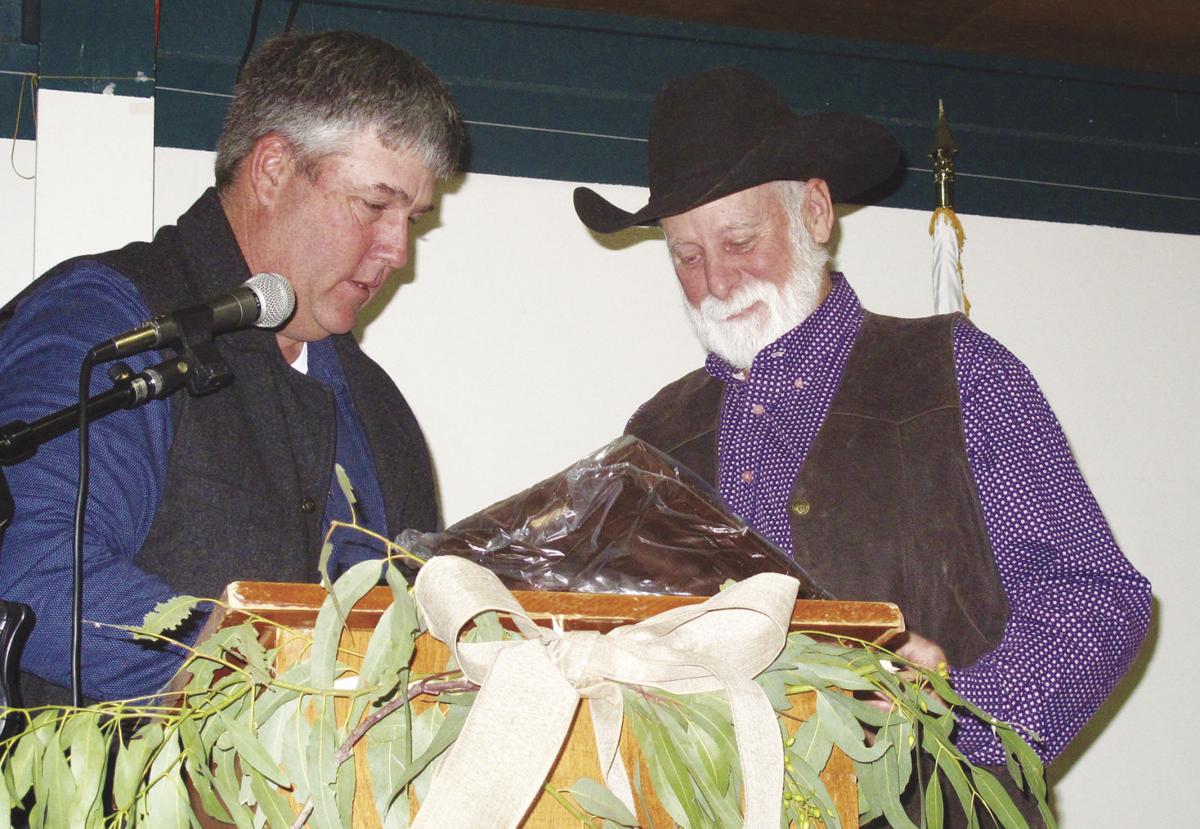 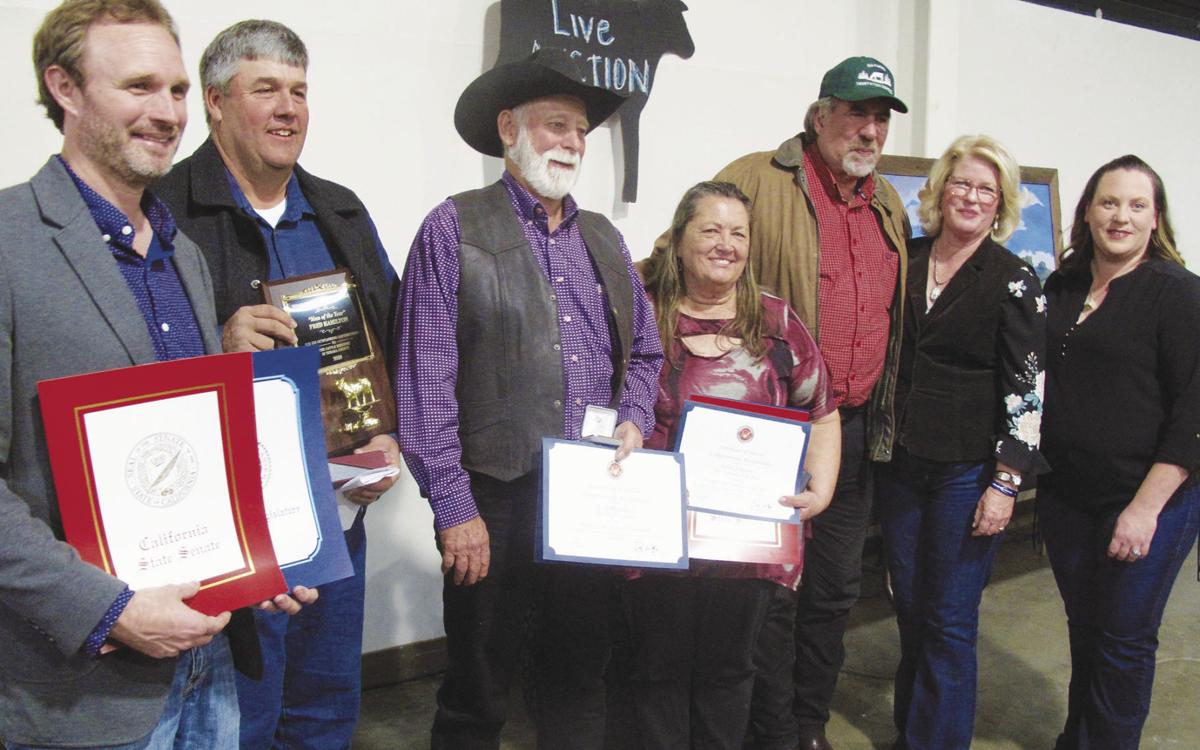 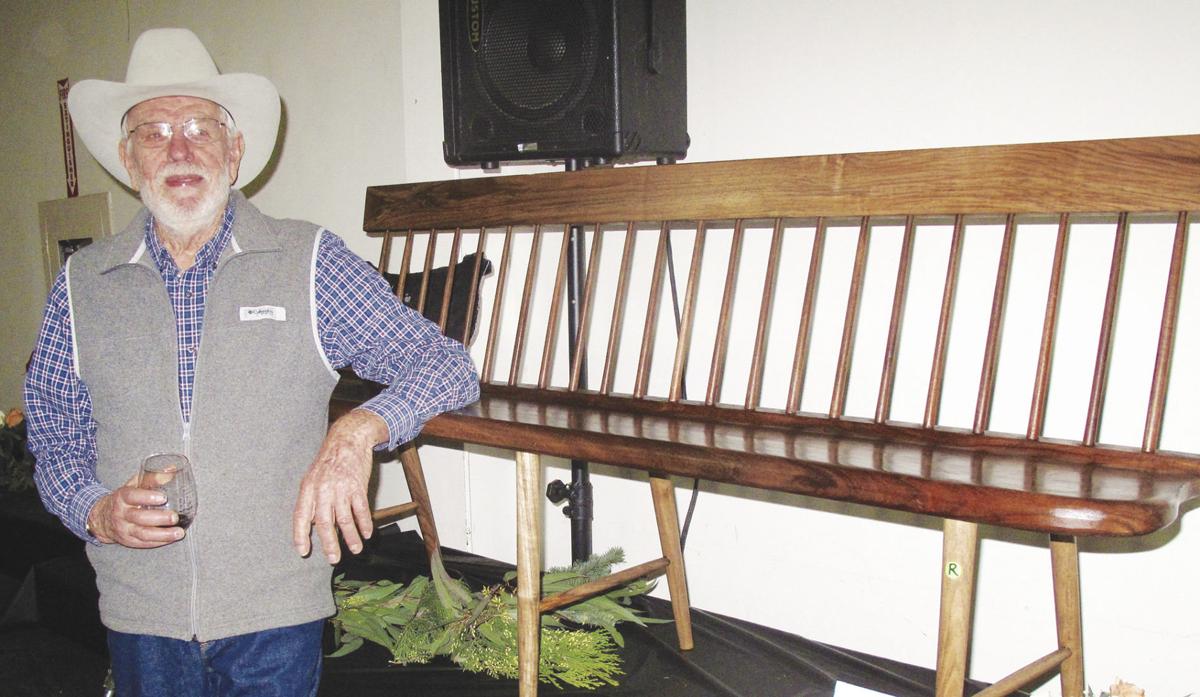 An English/black walnut settee handmade by Bill Borror, pictured, of Tehama Angus Ranch was auctioned off for $775 during the scholarship fundraiser at the Winter Dinner on Jan. 4.

An English/black walnut settee handmade by Bill Borror, pictured, of Tehama Angus Ranch was auctioned off for $775 during the scholarship fundraiser at the Winter Dinner on Jan. 4.

More than 400 people attended the 68th annual Winter Dinner and 17th annual Tehama County Cattlemen and Cattlewomen’s Agricultural Scholarship Fundraiser at the Tehama District Fairgrounds on Saturday where more than $25,000 was raised during the silent and live auctions and everyone enjoyed a delicious Vic Woolery prepared prime-rib dinner.

Additional highlights of the evening was Paskenta rancher and Cattlemen’s Association director Tony Turri announcing Fred Hamilton as the association’s Man of the Year and Kari Dodd recognizing Linda Johnson of Corning as the Tehama County CattleWomen’s Association Cowbelle of the Year.

Turri said of Hamilton that he was born in 1951 and lived with his family in Denny in the Trinity Mountains while his father was a packer for the U.S. Forest Service, and in 1956 moved to Vina where his father then worked as ranch foreman for Roy Carmichael.

“Along with his older sister and younger brother (Hamilton) grew up helping his father on the ranch, including yearly cattle drives by horseback from Vina to Portola in the spring and the return trip from Portola to Vina in the fall,” Turri added.

A 1968 graduate of Los Molinos High School, Hamilton attended Shasta College before fight fires for CalFire and working for P.G.and E. in the 70s. Hamilton retired in 2012 after working for more than 30 years for Tehama County Public Works.

“He (Hamilton) enjoys living on the ranch, hunting and fishing. He has been a member of Tehama County Cattlemen’s for many years where he has overseen and volunteered for different fundraisers, events, as president twice,” Turri said.

Hamilton served as president of the Deer Creek Watershed Conservancy, is a member of the Red Bluff Elks and a longtime supporter of the Tehama District Fair Junior Livestock Auction.

Upon receiving the recognition, Hamilton said, “I don’t know if I deserve this award. Thank you and I hope I can live up to this.”

He then encouraged the crowd to enthusiastically bid on the auction items in support of those who receive the scholarships.

“The auction if for the kids and they are our future,” he added. “Thank God for them.”

Johnson was first recognized as Cowbelle of the Year in November by the Tehama County CattleWomen’s Association by Kari Dodd. Johnson is married to Robert Johnson and the two run their cattle ranch in Corning. She is an active volunteer for the association, especially in the promotion of the beef industry.

Hamilton and Johnson were presented certificates of recognition from Assemblyman James Gallagher and U.S. Rep. Doug LaMalfa, and both were presented gifts from the cattlemen’s and cattlewomen’s associations.

Welcoming the crowd was outgoing Cattlemen’s Association President Ron Humphrey who then turned to reins over to incoming President Mike McCluskey, who said he is looking forward to a great year in 2020. A silver belt buckle was presented to Humphrey for his two years of serving as association president.

Cattlewomen’s Association President Anne Owens said the evening went on without a hitch and was very successful like a “well oiled machine.” Owens and McCluskey co-chaired the event along with countless hours from the event’s committee.

“We are always so excited to see the outcome of the live and silent auctions as this group year after year supports the youths of this county,” Owens said. And support they did as the fundraiser brought in more than $25,000.

New to this year’s fundraiser was the auctioning off of five Rodeo Dreams in a Bottle by auctioneer Cole Anderson of Shasta Livestock Auction. The bottles sold from $750 to $1,150, qualifying the winners to a Rodeo Dream raffle package of tickets to the 2020 National Finals Rodeo, Pendleton Rodeo, Happy Canyon Show, Hall of Fame in Pendleton, Redding Rodeo Extreme Bull Riding, and Reno Rodeo, along with hotel stays for each event.

Entertainment prior to dinner was provided by Allie Humphreys on the fiddle followed by the O’Sullivan Sisters who sang the national anthem.