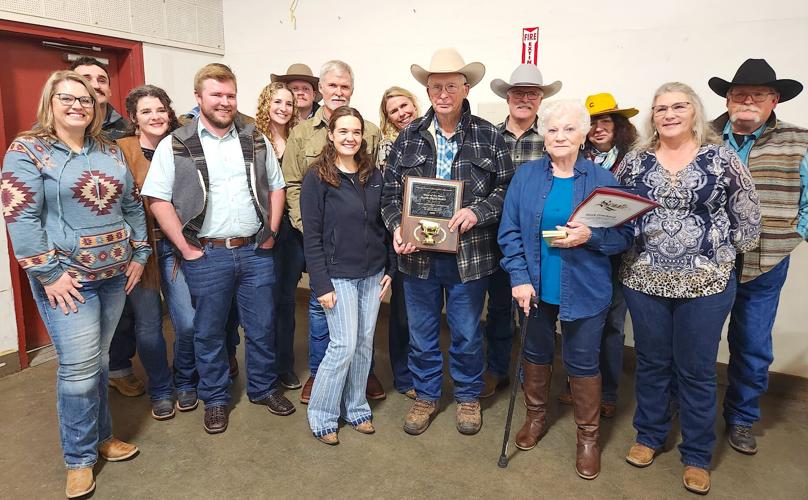 Honored as Tehama County Cattlemen’s Association’s ‘Man of the Year,’ Hank Pritchard, 80, of Manton, center, stands with his family during the association’s 70th annual Winter Dinner on Jan. 14 at the Tehama District Fairgrounds. He was presented the award by his sons, Matt, Mark and Craig Pritchard, all members of the association. 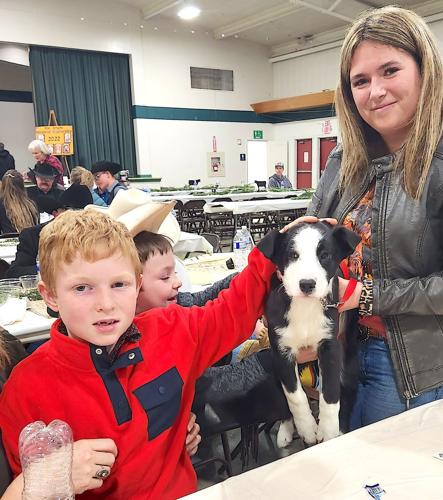 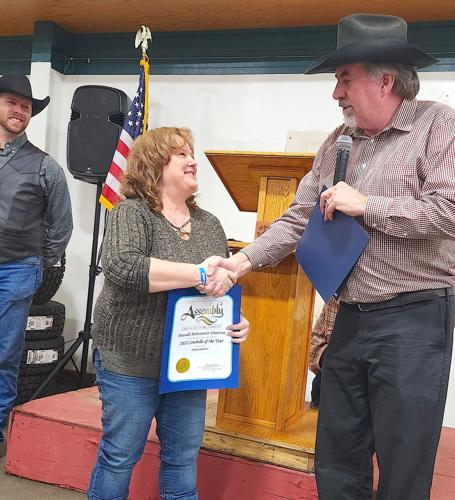 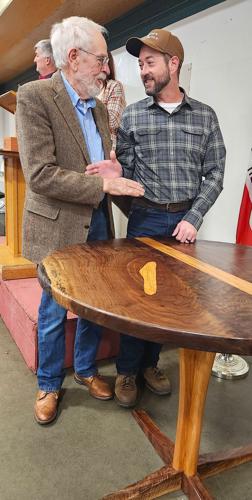 Honored as Tehama County Cattlemen’s Association’s ‘Man of the Year,’ Hank Pritchard, 80, of Manton, center, stands with his family during the association’s 70th annual Winter Dinner on Jan. 14 at the Tehama District Fairgrounds. He was presented the award by his sons, Matt, Mark and Craig Pritchard, all members of the association.

Tehama County Cattlemen’s Association’s 2023 “Man of the Year” is a cowboy who has been working and moving cattle in and out of the hills and mountains of Tehama County for most of his life. On Jan. 14 that work and dedication to the industry was recognized when 80-year-old Hank Pritchard of Manton was presented with the Man of the Year honor by his three sons, Matt, Mark and Craig Pritchard during the association’s 70th annual Winter Dinner at the Tehama District Fairgrounds.

It was a crowd of more than 300 who faired the cold and rainy evening to witness the event, enjoy some camaraderie and a delicious prime-rib dinner prepared by Mike Collins’ crew.

While introducing his father, Matt Pritchard said, “During the late 80s he (Hank Pritchard) spent time between Mill Creek and Deer Creek, with his trusty companions (his livestock dogs), he gathered nearly a 100 head of wild cows, hauled them to the sale yard and split the money with the permit holder at the time.”

Pritchard was born and raised in Manton on a ranch that was homesteaded by his great-grandfather starting in 1873. The family still lives and operates a commercial cattle operation there today.

Pritchard is a livestock dog trainer who has won grand champion or reserve grand champion titles several times at the Red Bluff Bull and Gelding Sale. He has served as president of the Tehama County Cattlemen’s Association.

“I just can’t hardly believe it,” said Pritchard of his award. “This is one of the highlights of my life.”

First District Congressman Doug LaMalfa was on hand to present Pritchard and Owens with congressional certificates recognizing the honors, as did a representative of Assemblyman James Gallagher.

The Winter Dinner was also home to the 19th annual Agricultural Scholarship Fundraiser.

“That is $4,935 more than last year’s total thanks to the generous community,” said Jean Barton, a member of the Tehama County CattleWomen’s Association.

A few of the highlights of the live auction were Daren Wooters of Wooters Honeybees buying Bill Borrors’ handmade pecan/walnut game table for $2,500, and braided rawhide reins made by Bob DeBraga bought by Kevin Borror for $2,400. A Border Collie puppy donated by Jared and Ann Kerr sold for $800, and by-phone from his hospital bed Mike Collins bought a dozen ½ pint jars of homemade gooseberry jam for $1,000. Collins also bought Cathy Tobin’s homemade “Patty Kelly Peanut Brittle” for a hefty sum.

“Hundreds of items were auctioned off during the event thanks to donations made by individuals and businesses,” Barton said.

The Los Molinos FFA helped in serving the dinner and Michele Hickok was the evening’s mistress of ceremonies.