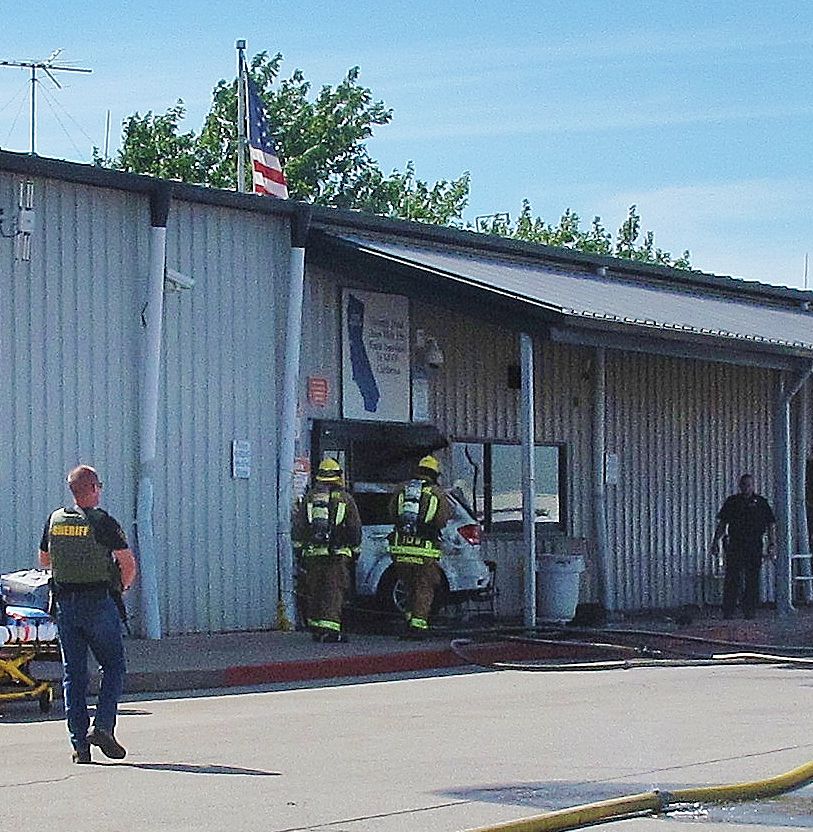 Suspected active shooter, Louis Lane, drives his SUV into the front lobby of the Wal-Mart Distribution Center in Tehama County before opening fire with a semi-automatic firearm on Saturday, June 27. 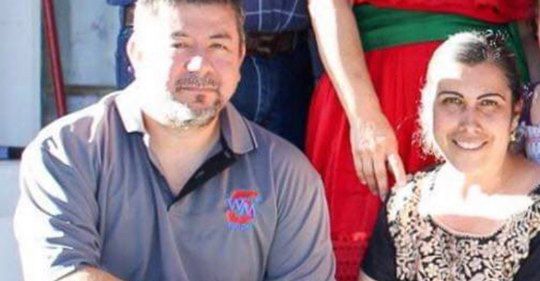 Martin Haro-Lozano, left, was reportedly shot and killed by Louis Lane during an active shooter incident at the Wal-Mart Distribution Center on Saturday. 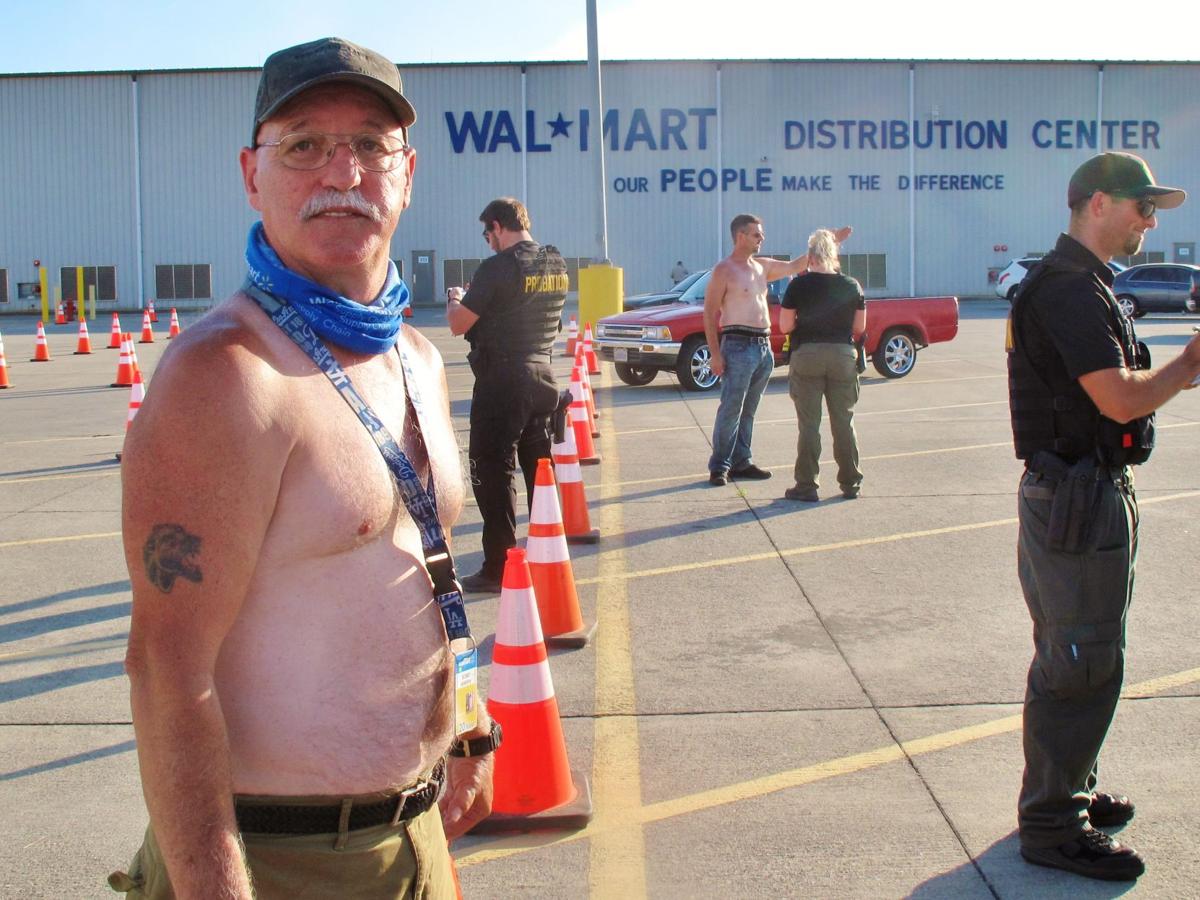 Bobby McFarlin, left, a 21-year veteran at the Wal-Mart Distribution Center was one of two men who rushed to give aid to Martin Haro-Lozano, moments after he had reportedly been shot by Louis Lane, an alleged active shooter who was armed and just feet away at the Center in Tehama County. McFarlin had taken his shirt off to try an stop the bleeding from the bullet wound in Haro-Lozano's torso.

Suspected active shooter, Louis Lane, drives his SUV into the front lobby of the Wal-Mart Distribution Center in Tehama County before opening fire with a semi-automatic firearm on Saturday, June 27.

Martin Haro-Lozano, left, was reportedly shot and killed by Louis Lane during an active shooter incident at the Wal-Mart Distribution Center on Saturday.

Bobby McFarlin, left, a 21-year veteran at the Wal-Mart Distribution Center was one of two men who rushed to give aid to Martin Haro-Lozano, moments after he had reportedly been shot by Louis Lane, an alleged active shooter who was armed and just feet away at the Center in Tehama County. McFarlin had taken his shirt off to try an stop the bleeding from the bullet wound in Haro-Lozano's torso.

The active shooter allegedly responsible for killing one man and injuring at least two other at the Wal-Mart Distribution Center south of Red Bluff on Highway 99W, Saturday, June 27, has been identified as Louis Lane, 31, of Redding, said Tehama County Asst. Sheriff Phil Johnston.

In a shootout with Red Bluff police officers, Lane was shot and later pronounced dead at a local hospital.

Johnston said Lane was employed at the Center in February 2019.

“He worked for two weeks and then failed to show for a shift and was released from employment,” he added. “That is the only connection we have between the Distribution Center and the suspect at this time.”

Wal-Mart employees who witnessed Lane at the shooting, described him as upwards of 300 lbs., around 5’11”, with a “man bun”, long beard, white, wearing dark shorts and a dark shirt, but none of them recognized him as a former employee of the Center.

It appears Lane came to the Center in a white SUV around 3:30 p.m., circled the parking lot at the main entrance four times and then rammed the vehicle into the front lobby. The vehicle caught fire, but it is unknown if the fire was caused by the collision or if it was caused by Lane.

“He (Louis Lane) hit a pedestrian with his vehicle as he was driving around the parking lot,” Johnston said. “That person was transported to the hospital.”

After ramming the vehicle into the Center’s main lobby, Lane reportedly exited the vehicle with a semi-auto rifle. A witness at the scene, Bobby McFarlin, a Wal-Mart employee of 20 years, who saw Lane with the firearm just feet away from him, said he believed the gun to be “something like an AR-15.”

Johnston said the gun was a semi-auto firearm with the capability to shoot more than the legal amount of rounds.

“It was definitely an illegal firearm,” he added.

At some point Lane entered the building with the firearm and started shooting at random.

“I saw glass shattering and at first I thought it was a bomb,” said employee Edna Araceli Arces, 37, of Corning, who has been working at the Center since 2018. “Then I heard gunshots and ran into the kitchen. I realized that was a dead-end and so I ran with some other employees out an exit door.”

Rich Blair, 47, of Redding, a 21-year employee of the Center, said on any given day shift there are approximately 150-200 employees working in the Center’s warehouse.

“I had been in the front office just seconds before he (Lane) rammed it with his car,” he added. “I had just gone into the warehouse when we heard gunshots and realized it was an active shooter. He (Lane) tried to get into the warehouse but couldn’t.”

It appears Lane went back out the opening created by his SUV and out into the parking lot where he was met by Haro-Lozano.

Lane allegedly shot Haro-Lozano, who went down in front of the office.

Employee, Dulce Perez, 29, of Orland, said she had just clocked out and was walking towards the front door when she saw fellow employees running the other way.

McFarlin, who had escaped out a side door of the Center, said he heard the shots outside and ran towards the noise.

“I peeked around the corner and saw the man who had been shot down on the ground. The shooter (Lane) was walking away into the parking lot, either his gun jammed or he was reloading it, and this gave me time to run to the injured man and try to help him. He was shot in the side going into his chest I believe,” he added.

Another man, Joe, joined McFarlin in trying to help Haro-Lozano.

“Just then the shooter (Lane) turns and starts shooting randomly. The guy helping me was struck by a bullet along the side of his head and I think in the arm,” he said.

At 3:35 p.m., the first of two Red Bluff police officers arrived and exchanged gunfire with Lane. The second officer arrived within a minute and joined in the shootout in the parking lot, Johnston said.

“During the exchange of gunfire with the officers, Lane went down,” he added. “He as transported to a local hospital for surgery. We received notice that he died at the hospital.”

McFarlin said, as this was taking place a Tehama County sheriff’s deputy pulled up to where Haro-Lozano lay.

“I used my shirt to try and stop the bleeding. We placed him into the patrol vehicle and the deputy transported the man to the hospital,” he added.

Quickly the employees still inside the Center where evacuated as law enforcement conducted a preliminary sweep of the structure and surrounding buildings, to locate victims and uncertain if there was a second shooter on scene.

The first search finished and no other threats located, a second, extremely thorough search was conducted, taking more than an hour to conclude, again with no additional threats located.

Wal-Mart officials from Arkansas arrived later in the day, expressing their support of law enforcement efforts, and the safety and care of their employees.

Many of the employees who made it out of the building safely, albeit traumatized, were asked to give statements and then allowed to leave the property

Blair, a veteran Wal-Mart employee, said he would be returning to work when the Distribution Center reopened, but “definitely I will be anxious, and I don’t know if things will ever be normal again.”

Johnston said, to his understanding, the fatalities included Lane and Haro-Lozano. Injured by bullets was Donaldson, who was treated and released from the hospital. There were other victims treated, some for emotional trauma, and the person struck by Lane’s vehicle in the parking lot.

Johnston said the sheriff’s department is still trying to determine a motivation behind Lane’s deadly actions.

Johnston said the California Department of Justice Bureau of Forensics Lab Team processed the scene in its entirety.

He emphasized the incident was not, in any way, related to a shooting incident that occurred earlier in the day Saturday, in Shingletown as had been portrayed by certain media outlets.