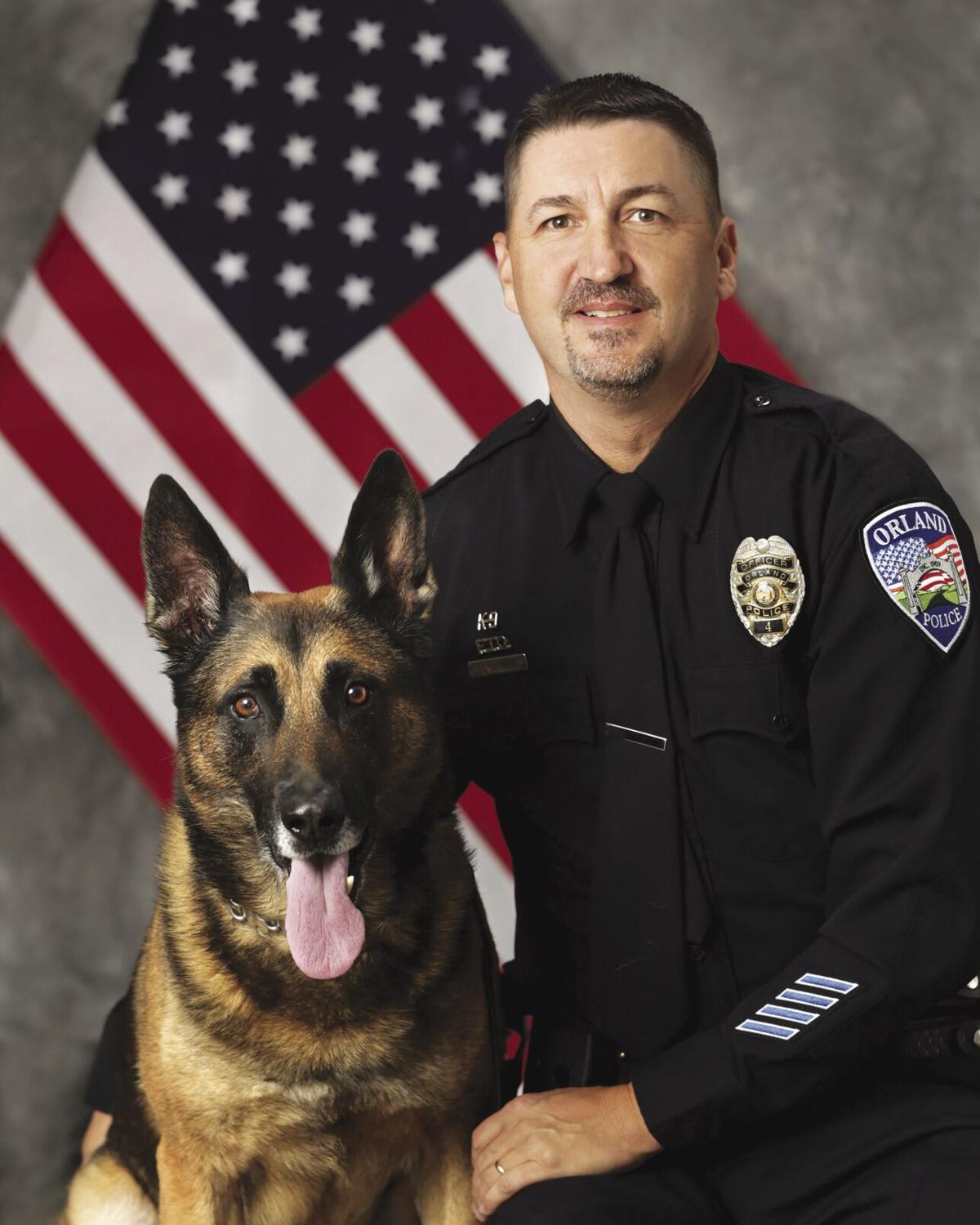 Orland Police Officer Grant Carmon holds an item he had Ruger search for during a training exercise in 2019. Carmon said he had Ruger conduct an article search – where Ruger will sniff out an item by the presence of human scent.

Orland Police Officer Grant Carmon holds an item he had Ruger search for during a training exercise in 2019. Carmon said he had Ruger conduct an article search – where Ruger will sniff out an item by the presence of human scent.

K-9 Ruger has served the Orland Police Department for more than seven years.

He has helped apprehend suspects, sniffed out drugs, visited schools and been an ambassador for the department’s K-9 Unit.

“He came from Slovakia, he has his own passport and everything,” said Officer Grant Carmon, Ruger’s partner. “... I think the best part about Ruger is his temperament, I can take him to the schools … He’s been a great ambassador for our program and people have been supportive and donating to us.”

Carmon said Ruger has only had two physical apprehensions – where he bit a suspect.

“Most of the time, the people surrender which is what we hope for,” he said.

One of their memorable cases, Carmon said, took place when Carmon and Ruger were working a graveyard shift and conducted a traffic stop.

The driver was acting nervous and Carmon had Ruger sniff around the vehicle, who then alerted.

Carmon said they discovered more than $70,000 in cash and a loaded firearm – they suspected the driver had come from Florida and was going to purchase drugs and take them back to Florida.

Ruger’s last day on patrol with Carmon was on Monday.

Carmon said the next step is to go before the city council and, hopefully, they will let Carmon keep Ruger to be a house dog.

“I’ve always wanted to bring Ruger (camping) but due to liability, he had to stay home,” Carmon said. “Now that he won’t be an official police dog, we’ll be able to take him to do different things.”

A challenge for the unit, Carmon said, will be raising enough money to get another dog for the department – he said it can cost close to $25,000 to outfit a new K-9 officer, including purchasing the dog, training and equipment.

Carmon said the department also requires officers to have three years’ experience before becoming a K-9 handler and there are a couple of officers interested but they don’t have the years yet.

Carmon retires at the end of next year, so he won’t be getting another K-9.

“It’s bittersweet and I really enjoy it,” Carmon said. “It’ll be sad not to have that but luckily, Dutch has the same temperament (as Ruger).”

People can donate to the Orland Police Department K-9 Unit through the North Valley Community Foundation by visiting www.nvcf.org/funds/orland-police-department---k-9-unit.

The unit also has a number of items – T-shirts, sweatshirts, hats, stuffed dogs, challenge coins, etc. – that can be purchased at the department and funds go to support the unit.