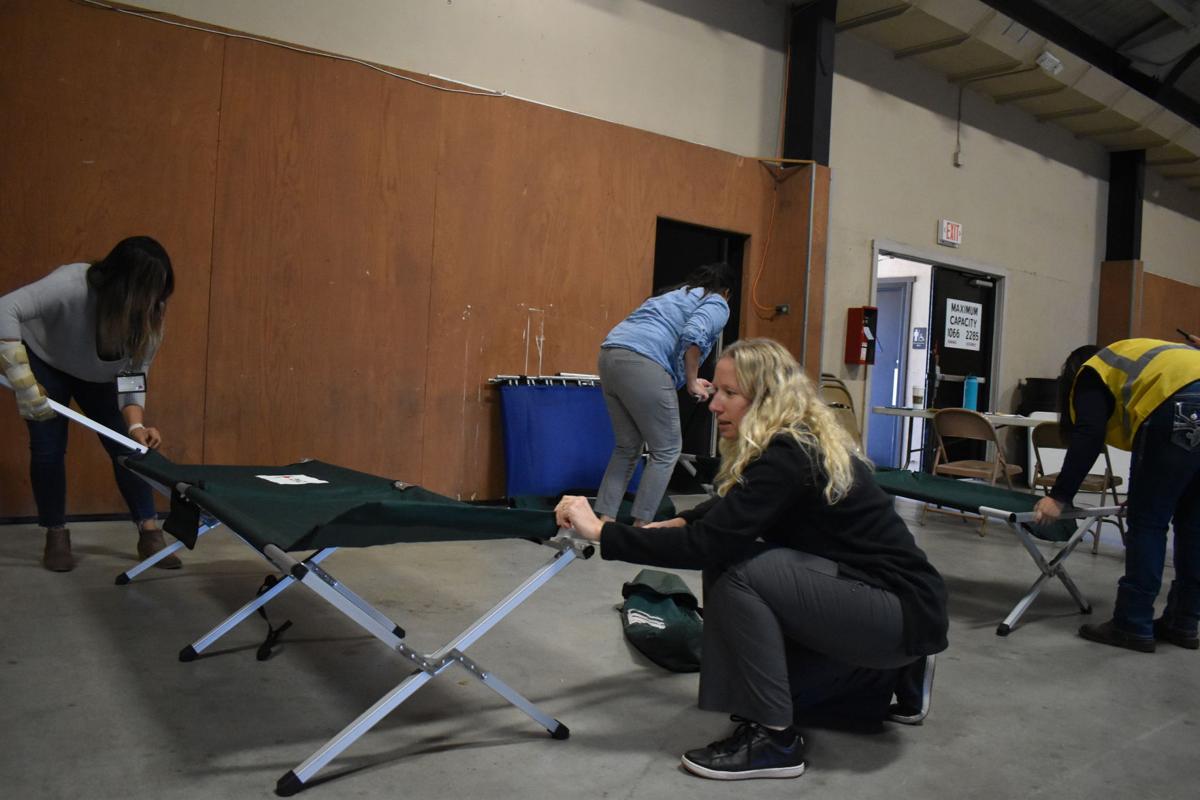 Participants in a shelter management exercise at the Glenn County Fairgrounds put together cots on Nov. 6. 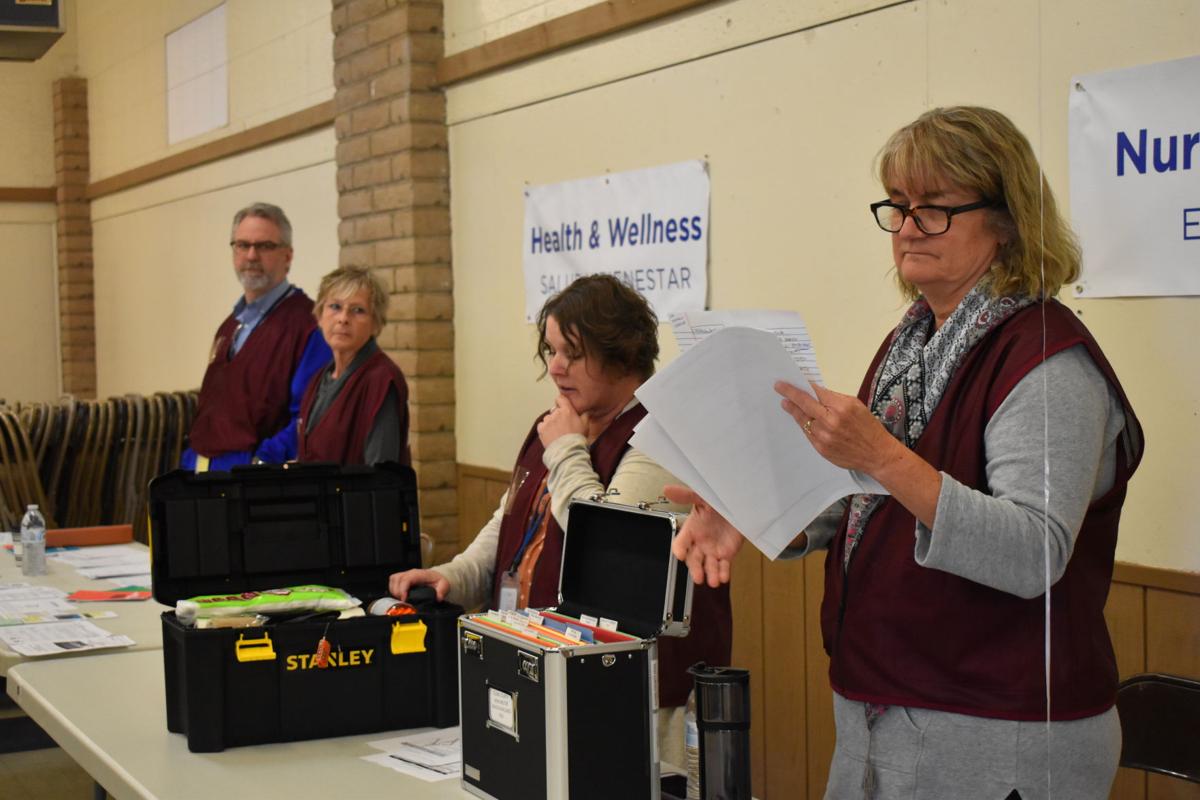 A presentation is given at the Nursing Station during the shelter management exercise at the Glenn County Fairgrounds on Nov. 6.

Participants in a shelter management exercise at the Glenn County Fairgrounds put together cots on Nov. 6.

A presentation is given at the Nursing Station during the shelter management exercise at the Glenn County Fairgrounds on Nov. 6.

Some Glenn County agencies came together at the Glenn County Fairgrounds to participate in a shelter management training exercise last week.

Amy Travis, deputy director of the Glenn County Office of Emergency Service, said the Health and Human Service Agency has a shelter management team who took people through each stations on the different aspects of a shelter – such as registration, feeding, health and wellness, dormitory and more.

Travis said the American Red Cross isn’t always available in the first 72 hours to assist during an incident.

During incidents like the Oroville Dam and Camp Fire, the county began working to provide their own shelter services.

“The county is realizing that is a function we can provide,” Travis said. “Social services, which is under Health and Human Services, is also charged with that responsibility during an emergency at the state level and so at the county level. We’re embracing that responsibility and ensuring that we’re trained and we have the resources we need so we can provide that to our residents.”

Recently, the Office of Emergency Services released the revised emergency operations plan. Travis said the new list of policies for county shelters is also included in the plan – such as how to deal with a registered sex offender, with camping on site, how to deal with animals, etc.

During the training, participants were given packets including checklists of what people would be responsible for when a shelter would open.

“We don’t do sheltering on a day-to-day basis, maybe we do it once a year, so it’s really good to have a job aid that says ‘hey, when you’re working, here’s the first few things you need to do when you open a shelter and here’s what you need to do everyday during your shift,’” Travis said.

She said the polices and procedures were developed based on experiences during the Oroville Dam and Camp Fire incidents.

“We learned a lot of lessons from those two incidents,” Travis said. “... During the Oroville Dam was the first time we ever ran a county-run shelter and it was a very large shelter for us and we had to kind of learn on the fly and that’s not you want to do in an emergency. We want to make certain we have people that are trained.”

She said they did better during the Camp Fire, but were still dependent on Red Cross and realized they weren’t coming.

“Because they weren’t coming when we needed them, we realized we need to have these procedures and have our own people trained on them,” Travis said. “So, incredibly, in one year, we have really accomplished a lot of those things in our after action report. We have really accomplished purchasing the equipment that we need to support a shelter and setting the policies and procedures in place.”

Laura Medina, of the Health and Human Services Agency, said they learned a lot of lessons and determined things that could be improved from their last shelter activation – such as having more signage for those using the shelter and developing more policies and procedures.

– At the Nursing Station, instructors talked about how their main responsibility is to “maintain individual health.”

The instructor said it was important to be on the look out for people who could be ill and isolating someone with an illness as a “shelter is a perfect opportunity for disease transmission.”

They advised that they should spend some time talking to people and asking how they’re feeling health wise.

They also emphasized the importance of hand washing, having hand sanitizer stations and wiping down services.

– At the Health and Wellness Station, the main focus was on mental health. It was advised that people also spend time talking with people and seeing if they’re having a difficult time.

It was said that shelter staff and provide support, assessment and de-escalation, however, if someone needs ongoing therapy, they would also refer people to where they can get help.

– The Feeding Station instructor talked about when to provide meals and having snacks available.

The instructor also said having coffee ready for people at the shelter is important as “during a stressful situation, having a cup of coffee can be helpful.”

They also talked about hand washing and cleanliness and tracking how many meals are going through.

– At the Dormitory Station, the instructor talked a about the shelter checklist and things to consider, such as families, and things to look out for, like noise being at a controlled level, cleanliness, keeping everyone’s stuff within their space, etc. The participants also set up cots – with the added excitement of racing to see who could build one faster.

– The North Valley Animal Disaster Group was also in attendance to train the sheriff’s office animal control staff and other volunteers on how to set up an animal shelter. The instructors talked about things like intake, creating forms, policies and procedures, housing livestock, cats and dogs, and more.

During a recent Glenn County Board of Supervisors meeting, a new Operational Area Emergency Operations Plan was adopted.

Amy Travis, deputy director of the Glenn County Office of Emergency Services, the document is a plan for how local agencies would work together in response to an emergency or disaster.

“We’re unique because we’re small,” Travis said. “Orland and Willows are incorporated into this county plan – a lot of cities have their own but we decided that we do a lot better (working together).”

The plan is now more inclusive of the cities, she said.

Both the Orland and Willows city councils adopted the plan during meetings.

Travis said another big change was broadening the process and procedures for how agencies will communicate with the public – such as using emergency notifications like using Nixle and CodeRED as well as media and social media.

She said a plan was also added about a specific evacuation plan for in case Black Butte Dam were to fail – she said they learned lessons from the Oroville Dam incident a couple of years ago.

She said the plan includes where they would have people in specific sections of the county go in the event of an incident.

“Hopefully we’ll never have to use that,” Travis said.

Travis said the last revision of Glenn County’s Emergency Operations Plan was in 2015 and they began revisiting in 2018.

“I decided to do a full revision because of all the things we’ve learned,” Travis said. “We’ve had a lot of emergencies so we learned a lot in our existing document and where we had gaps.”

She said they tested it a lot – she said they had a base revision during the Camp Fire, but realized they had more things to work on following that.

“It’s definitely critical we want to make sure we remain compliant with state and national standards,” Travis said. “We learn from our responses and use what we learned so we don’t repeat mistakes and fill those gaps.”

Travis said, just like the county and cities, residents should have a plan for what they would do in the event of an emergency.

“Everybody should have a plant,” she said. “What hazards are there? How will you evacuate? Where?”

Travis said people can visit the www.countyofglenn.net website under the Office of Emergency Services page for tips on how to be prepared at home along with other resources.