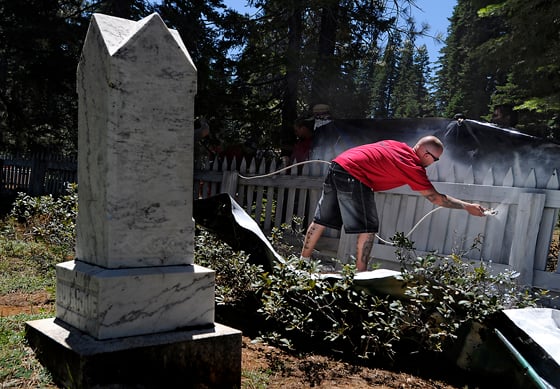 Joe Powell, with the Frank C. Reilly Chapter of E Clampus Vitus, sprays paint on the fence surrounding the La Porte Cemetery on Saturday. The 3-acre cemetery has quite a history underneath the ornate marble headstones and graves marked only with river rocks hauled from gold mines. 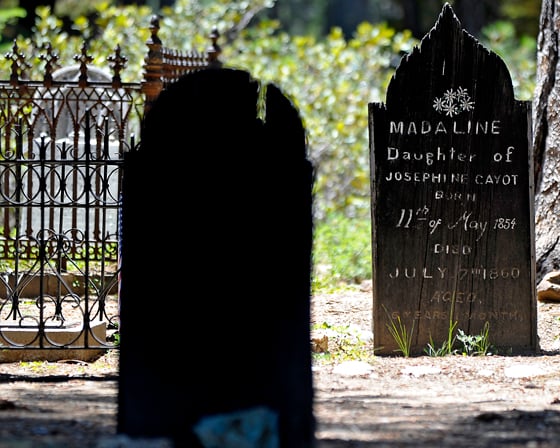 A wooden marker for a young child who died in 1860 sits among other markers dating from 150 years ago to today at the cemetery.

Joe Powell, with the Frank C. Reilly Chapter of E Clampus Vitus, sprays paint on the fence surrounding the La Porte Cemetery on Saturday. The 3-acre cemetery has quite a history underneath the ornate marble headstones and graves marked only with river rocks hauled from gold mines.

A wooden marker for a young child who died in 1860 sits among other markers dating from 150 years ago to today at the cemetery.

With a carpet of pine needles, purple lupine and Indian paintbrush, the La Porte Cemetery has become the final resting place for so many miners, town founders, mountain residents and seasonal vacationers.

The 3-acre cemetery has quite a history underneath the ornate marble headstones and graves marked only with river rocks hauled from gold mines, said Carla Gray, chair of the La Porte-Quincy Cemetery District and 30-year resident of La Porte.

"It's very colorful and something we like to take care of," she said. "It's a real beautiful little cemetery."

But like many small, rural cemeteries, it struggles with limited finances and has come to depend on volunteers for much of its oversight and maintenance.

Even that has become a challenge because "most of the people who used to help are in the cemetery now," Gray said.

On Saturday, she gushed with thanks to about 60 members of the Frank C. Reilly Chapter of E. Clampus Vitus as they hammered new fences and painted a fresh white coat along the cemetery's border. Buried under a heavy blanket of snow each year, the fence often needs repairs, but the volunteers hope their extensive reconstruction efforts will last for years.

The Clampers were happy to lend a hand, said chapter president Eddie Vazquez, noting the organization's commitment to historic preservation and community aid. The La Porte Cemetery is also where their founder is buried.

"It's a historical landmark," he said.

There could be no more fitting resting place for Frank C. Reilly, the miner son of a pioneer family who also served as mayor, bartender and barber of La Porte for decades, said his son, Marysville resident Pat Reilly.

An estimated 200 people are interred within the cemetery's borders, including Francois and Josephine Cayot, who built the original Cayot Hotel — now the restored Union Hotel. And so is the town's last justice of the peace, Cleveland O'Rourke, who selected a plot in the spot he sat in third grade, when a schoolhouse once stood on that site.

"It's a history book of La Porte," Pat Reilly said. "You could probably write an encyclopedia of history books if you go through and talk to each one of these old-timers in here."

One favorite tale is that of the brothers Alfred and William Primeau. After a dispute over a pig, the men went 30 years without speaking to one another until Alfred Primeau fell ill and was taken to the hospital in Quincy.

A short time later, William Primeau became sick and was taken there as well. Nurses noticed the men had the same name and roomed them together, lighting the spark that rekindled their relationship.

Today, the two men are buried in adjacent plots.

"It was like long-lost brothers," said Gray's husband, Jon Gray.

People continue to request burial in the cemetery today. On Saturday, a cluster of dried red roses lay at the base of one recently laid headstone, and newly placed silk flowers and small American flags fluttered in the breeze.

Conditions for burials are the same as they were 150 years ago.

"When somebody passes away in the wintertime, you either have to freeze them; or cremation is better, and you can bury the ashes in the summer," Carla Gray said. "Years ago, they would bury people under the floorboards of their house and in spring they would remove and bury them."

Eliza Bullard, coordinator of the Plumas County GenWeb Project, surveyed the La Porte Cemetery in 2004 and compiled a database of those buried there. She said the cemetery is typical of historic gold-mining cemeteries, with many broken and illegible headstones and some graves missing markers altogether.

"They virtually melt away over time," she said. "The writing goes first and then the stone itself starts disintegrating."

A stroll through the La Porte Cemetery reveals deaths of young children, women who died in childbirth and many young miners who came without families. They may have died in a tunnel collapse, perished from exposure or were murdered in a claim dispute, Bullard said.

"The ones that particularly interest me are the 23-year-olds that died and there is no other family in that cemetery, no one else with that name," she said. "You think, why did he die and where was his family and did his family ever know what became of him?"

In a way, cemeteries made mining camps a community, Jon Gray said.

"Otherwise you are just a bunch of vagabonds out in the creek fending for yourself," he said.

Not too many years ago, an old, penniless miner died in La Porte. Neighbors took up a collection, bought a plot and had him buried, with the headstone reading both his given name, Robert Lee Gilbert, and his more well-known moniker — Flat Nose Bob.

For many longtime residents and seasonal cabingoers, the storied cemetery is the only place they can imagine being laid to rest.

Marysville resident Marvin Bredemann has many friends buried within the now-white picket fence, including his wife, Donna May. The couple first came to Loma Rica in 1974, built themselves a cabin and were smitten with their mountainous getaway.

"She loved it up here," he said. "That was one of her requests — to be buried under the pine trees."