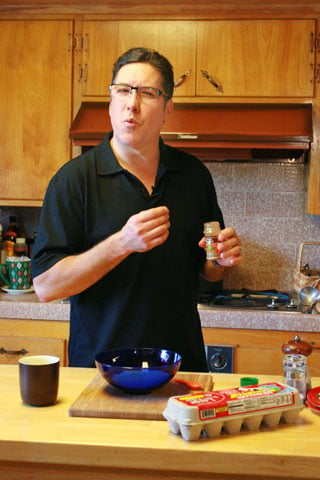 The secret ingredient for Grandma Anna’s German Butterball Soup is allspice, Troy says. He said it’s OK to add a little more or less of the spice, to suit your taste, after you’ve made the recipe once. 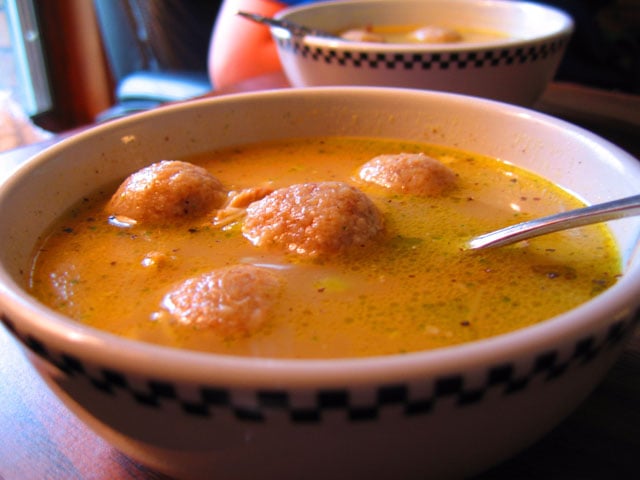 A serving containing four or five butterballs is more than enough to fill up most anyone, Troy says.

The secret ingredient for Grandma Anna’s German Butterball Soup is allspice, Troy says. He said it’s OK to add a little more or less of the spice, to suit your taste, after you’ve made the recipe once.

A serving containing four or five butterballs is more than enough to fill up most anyone, Troy says.

"Grandma Anna took great pride in being a homemaker, back in a time when that was something to be very proud of. She did all of the stuff we think of when we think of grandmothers. She did fried chicken and the baking. Her butterball soup one of the recipes she would do at holidays."

Talking about his youth, Troy said, "We'd always meet at Grandma's house for the holidays, because they really centered around her being there, her cooking and everyone trying to help.

"I got together with my cousins not very long ago, and we were talking about Grandma and the things we remember about her — her cooking was always that main thing. She took great pride in her cooking and the cleanliness of her house and her kitchen. Her house was spotless," he said. "We reminisced how much we missed spending time on the farm."

He said those memories on his grandparents' Colorado farm was what prompted him to share his grandmother's recipe.

"It's a pretty simple recipe," Troy explained, but he had one caveat: "We put these butterballs into chicken soup; unfortunately, Grandma never taught me how to make the soup. But this recipe is all about the butterballs and not the soup.

"This recipe almost seems too simple for how good it turns out. What I do is mix all the dry ingredients first, including allspice, because if there is a secret ingredient in the recipe, it's the allspice. It really sets off the flavor."

Troy said, as an aside, that after you've made the recipe the first time with the suggested 1 teaspoon of allspice, you can adjust the amount by putting in a little more or a little less to suit your taste the next time you make it.

Once all the ingredients are in the bowl and mixed to the texture of cookie dough, it's time to get the family involved in rolling the butterballs, Troy said. "Kids will love this, and get the people who don't like to get their hands dirty to help you — it's a lot of fun."

Size is important when making the butterballs, he said. "It's not a matzo ball; it's not a softball. You just want make a nice little ball, about the size of a walnut, that's as round as you can make them. If you want them a little bigger, you can go up to maybe golf-ball size, but not any bigger. I've experimented with bigger ones and smaller ones, and I've found that the smaller ones just work better."

There are two really important steps in this recipe, and the first takes patience, Troy explained. "You have to refrigerate the balls for at least four hours, but overnight is best. That way, you give all the ingredients a chance to pull together, and you come up with these little nuggets of goodness."

To make the soup the next day, "You can use any chicken soup you want, even instant — sorry, Grandma," Troy quipped. "You can even make your own. I use prepared chicken soup and doctor it up. A little bit of green onion is nice.

"Once you've got the soup ready and it's simmering on the stove, drop in the butterballs one at time. Do it really easily; don't splash any (hot soup) on yourself." The second important step comes when you're cooking the tasty morsels.

"Remember, have the soup at a simmer," Troy cautioned. "You don't want to boil the butterballs, because they'll fall apart. If the balls don't stay together when you cook them, you end up with a wonderful bowl of mush.

Troy said there's no need to rush to ladle out the butterballs, because "The longer they sit in the broth and soak the flavors up, the nicer they get."

But don't overeat, Troy warned, "Because if you eat six or eight of these things, you'd better go lie down."

1/2 cup half and half or heavy whipping cream

Heat soup until simmering, add 12 to 14 butterballs and simmer five to seven minutes. Balls will initially sink, but will float when done. Important: Do not boil; balls will fall apart if you do.

Serve soup with two to three butterballs in each bowl.

As he was monitoring the cooking process, Troy reminisced about his childhood and his visits to he grandparents' farm.

"When the cousins and I would eat these at Grandma's house, when we were kids, we would eat some of the balls, and then go running around, and then come back and there'd still be a pot full of soup and butterballs. It seemed like it was endless."

Once the delicious butterballs and soup were served and devoured, Troy said there was one thing he wanted people to remember: "This is my Grandma Anna's recipe, and I know all of you are going to love it."

Troy has lived in District 10 for about 18 years with his wife, Heidi. "I met her in Woodland, and I followed her up here when she went to college."

Troy said he was born in the Bay Area, but his family moved to Esparto when he was a youngster. He later graduated from Esparto High School.

What natural beauty do you appreciate the most in the region?