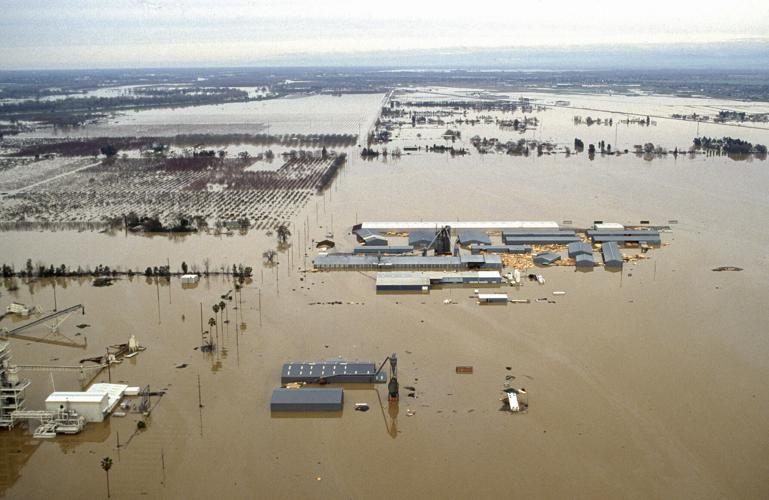 An aerial photo taken on Jan. 4, 1997, looks north over floodwaters on Feather River Boulevard and the Yuba River Moulding & Millwork, plus agricultural lands within Reclamation District No. 784 in Yuba County. A breach on the east levee of the Feather River near Country Club Road caused flooding in this region after a massive rain event hit Northern California. The storm dumped record rainfall (up to 30 inches) in the Sierra Nevada mountain range and caused rapid runoff and widespread flooding. 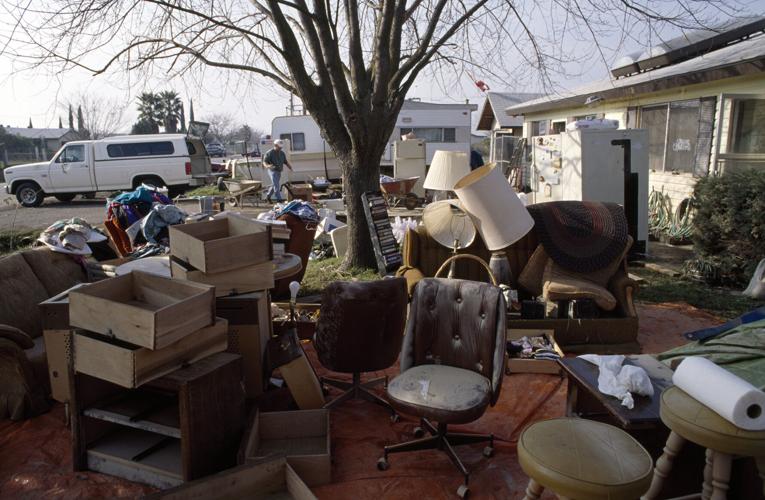 A family on Butterfly Lane in Yuba County placed furniture and household items outside of their house on Jan. 9, 1997, to start the drying out process after the area was inundated with floodwaters.

An aerial photo taken on Jan. 4, 1997, looks north over floodwaters on Feather River Boulevard and the Yuba River Moulding & Millwork, plus agricultural lands within Reclamation District No. 784 in Yuba County. A breach on the east levee of the Feather River near Country Club Road caused flooding in this region after a massive rain event hit Northern California. The storm dumped record rainfall (up to 30 inches) in the Sierra Nevada mountain range and caused rapid runoff and widespread flooding.

A family on Butterfly Lane in Yuba County placed furniture and household items outside of their house on Jan. 9, 1997, to start the drying out process after the area was inundated with floodwaters.

Twenty-five years ago in Northern California, the New Year’s flood of 1997 was a catastrophic event in which hundreds of residents were displaced from their homes in Yuba City, Marysville and surrounding areas that left many neighborhoods underwater.

Damages of the flood were estimated at $1.8 billion and eight casualties resulted in the disaster, according to reports from KCRA-3. These floods were caused by a winter storm’s intensity, water runoffs, large outflows from reservoirs and levee breaks. However, today the region is more prepared if such a storm were to occur again.

Evacuations in Yuba and Sutter counties, at that time, were the single largest evacuations in the country for anything other than a hurricane, according to Chuck Smith, public information officer for Sutter County. On Jan. 4, 1997, local efforts were aided by California Conservation Corps members who helped place sandbags to save the community of Meridian from flooding but several homes and farms in the Meridian basin flooded.

Along the west bank of the Feather River, on the Sutter County side directly across the river from where it broke in Yuba County, Levee District One placed 233,000 sandbags to save the levee from failing, said Smith.

According to Smith, since the 1997 flood, the counties of Sutter and Butte, along with the cities of Biggs, Gridley, Live Oak, and Yuba City, formed a joint powers agency called the Sutter Butte Flood Control Agency to rehabilitate 44 miles of the Feather River levee, substantially reducing the flood risk to Sutter County.

Brent Hastey, director of Yuba Water Agency, remembers living through the 1997 flood. Hastey, who was on the Yuba County Board of Supervisors and a father of four at the time, remembers vividly how his family walked through the county supervisors’ chambers on the third floor of the Yuba County courthouse in their pajamas and how they slept in the closed session meeting room through the disaster.

“I think we all got stronger because of the flood,” said Hastey. “After seeing my house was flooded, I got a call from my mom, who lived over on Featherwood Boulevard, and her house was in far worse damage than ours. In fact, we flew over it and couldn’t even see the roof. It was that far underwater. And she called me and said she was taking her motorhome over Camp Far West and everything was good. I told her, ‘Well, I’m flooded too mom. Our house is in the water.’ She said, ‘Well, how are the kids doing?’ They’re fine. ‘How is Alison?’ Fine. She said, ‘OK, well, it sounds like everything you need is there so we can always rebuild it.’ As someone coming back from their house, in a canoe, those were truly the best words my mom could have said, we really went to work on becoming stronger and rebuilding what we lost.”

Hastey said he gives Yuba County the credit of working so hard on rebuilding the levees and working diligently to protect people against the risk of another major flood event. Hastey said he is proud to have seen Yuba County put financial backing behind the process of building levees and improving work on flood control.

“I think it’s important to reflect on the flood of 1997 because it impacted so many people in Yuba County, and it’s indicative of the threats we face from both of our rivers, the Yuba River and the Feather River,” said Ryan McNally, director of water resources and flood risk reduction at Yuba Water Agency. “Looking back, this is something that can happen at any time.”

Through the Yuba River Basin Project, a federal project designed to reduce flood risk throughout Yuba County, the Yuba Water Agency and its partners were able to fund the construction and improvements to more than 30 miles of levees along the Yuba, Feather and Bear rivers.

Yuba Water Agency in partnership with reclamation districts throughout Yuba County, the city of Marysville, the U.S. Army Corps of Engineers, the California Department of Water Resources, the Three Rivers Levee Improvement Authority and others were able to enhance the Bear and Feather River setback levees, the Marysville Ring Levee and the Goldfield Levee, located further east out near Beale Air Force Base.

“I think the biggest completed projects are the Feather River and the Bear River setback levees near Plumas Lake and Arboga,” said McNally. “They are multi-benefit projects that brought a 200-year level of flood protection to South Yuba County, which means that there’s a one in a 200 or half a percent chance that the storm will come along larger than the system is designed to handle and just for context, the 1997 flood was considered a 100-year event.”

According to McNally, studies conducted by the Yuba Water Agency have shown the need for setback levees and forecast informed reservoir operations (FIRO). These forecasted informed reservoir operations allow agencies to better predict weather conditions and patterns to have forecasted coordinated operations. These coordinated reservoir operations at Lake Oroville and New Bullards Bar help Yuba Water Agency, in partnership with the California Department of Water Resources, coordinate releases from the reservoirs to better protect people within the county. A second spillway at New Bullards Bar is currently in the planning and design phase. The purpose of the design is to make more room in the reservoir in anticipation of storms.

Working closely with the U.S. Army Corps of Engineers, current projects Yuba Water Agency is working on are continued levee improvements including the Marysville Ring Levee, the refining of reservoir operations and the enhancing of their program called Forecast-Coordinated Operations to further expand the coordination and data sharing among flood management agencies.

Hastey said that even though Yuba County has built some of the best levees in the state, floods can occur, so it’s always better to be prepared for natural disasters.

“Since you don’t know when something like this can occur, having flood insurance, being prepared, having a go bag, listening to the weather forecast and the things that are happening around you, being aware, is important,” said Hastey. “I think it’s hard to imagine what it looks like with that much water until you’ve seen it, but you really need to think when you’re driving across the E Street Bridge or the 10th street, there are times when there is literally water from levee to levee and you need to be prepared for that and prepared to move.”