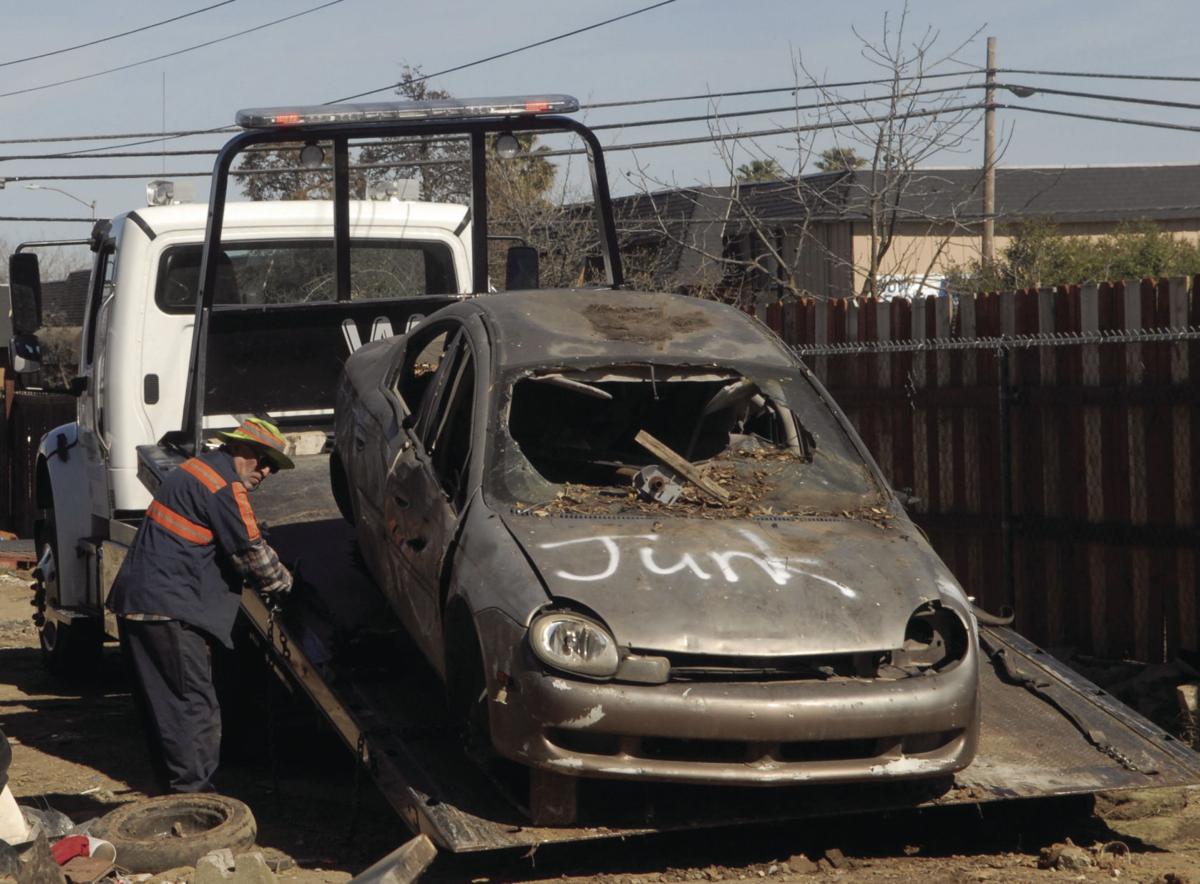 Yuba County code enforcement began an abatement procedure on Tuesday including hauling 35 junk cars off a property in the 2000 block of McGowan Parkway in Olivehurst. 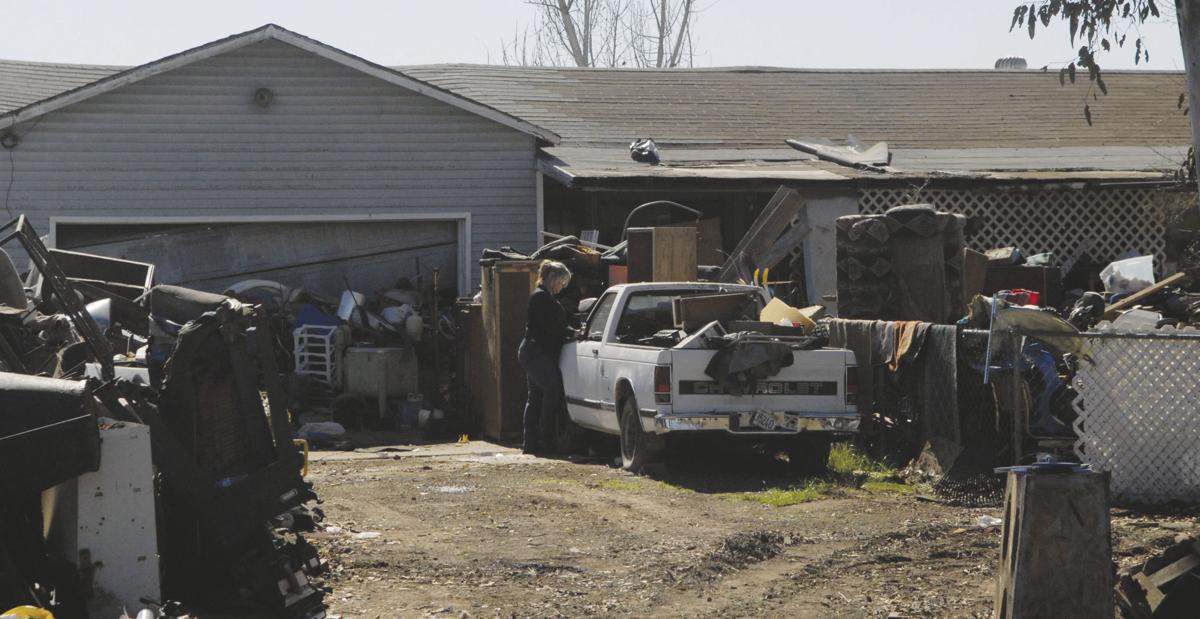 Tracie Clark of code enforcement, surveys the property at the 2000 block of McGowan Park during an abatement procedure on Tuesday. 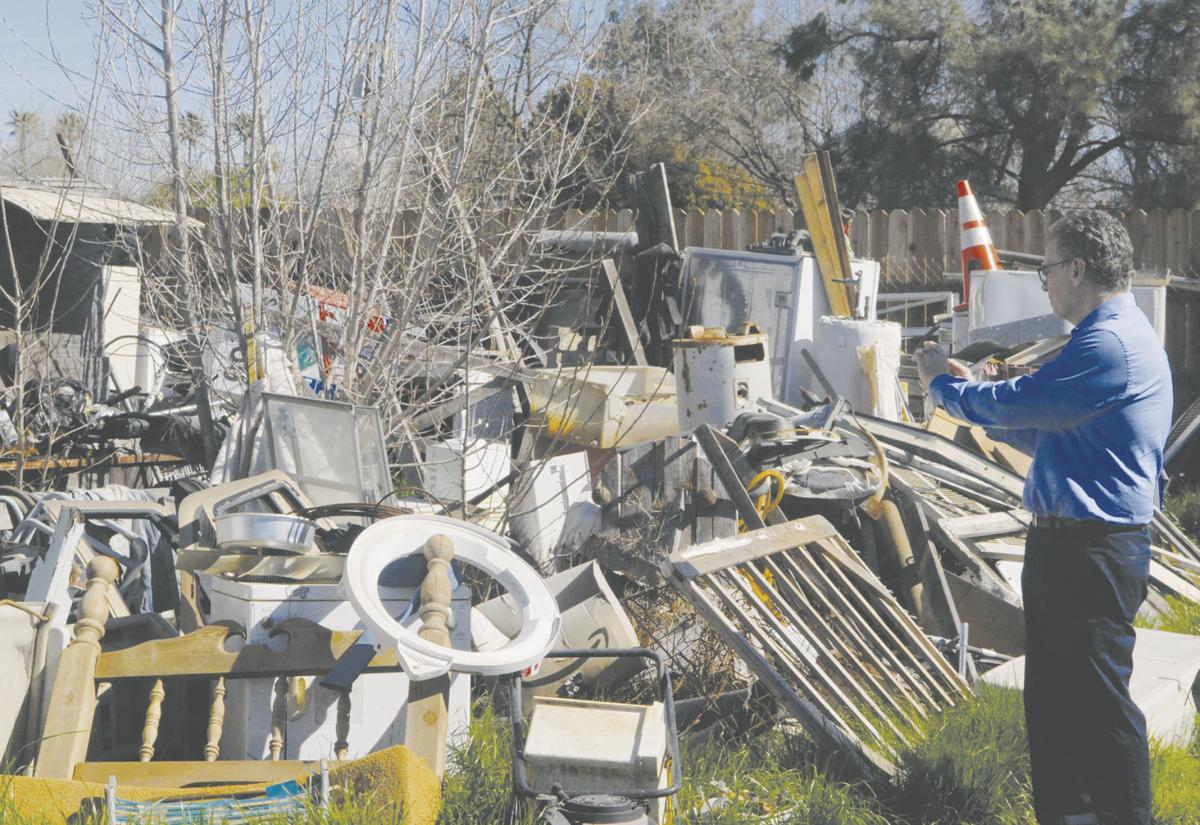 Items stacked up outside the property off the 2000 block of McGowan Parkway in Olivehurst.

Yuba County code enforcement began an abatement procedure on Tuesday including hauling 35 junk cars off a property in the 2000 block of McGowan Parkway in Olivehurst.

Tracie Clark of code enforcement, surveys the property at the 2000 block of McGowan Park during an abatement procedure on Tuesday.

Items stacked up outside the property off the 2000 block of McGowan Parkway in Olivehurst.

Following years of negotiations with the owner, an abatement procedure was started on Tuesday involving a multi-room home nestled behind another house at the 2000 block of McGowan Parkway in Olivehurst.

Clark said that code enforcement has worked with property owner Arthur Vickers during the whole process and he was cooperative during the multiple inspection phases. Ultimately, Clark said he hadn’t made the progress necessary to ward off the abatement process.

Clark said the procedure began in 2017 with the necessary paperwork and Vickers did not initially respond.

Members of Vickers’ family, who live in Nevada, got involved to help clean up the property for a short time. But Vickers ended up throwing them off the property, which effectively ended the family’s involvement, Clark said.

The warrant to abate the property, listed at 2208 McGowan Parkway Apt. B, is for five days, and started with removing all 35 unregistered, inoperable cars off the property, Clark said.

On Wednesday, Clark said an abatement officer will start removing all the property littered about outside the front, back and side of the house.

Clark said there was no running water, electricity and the well was not in use. In addition, there were multiple health and safety violations, including a rat infestation, and multiple fire hazards.

The house was tagged “unsafe to occupy,” Clark said.

After the cleaning out phase is complete, code enforcement will decide whether to board up the house or demolish it, Clark said.

Vickers will still be able to retrieve his property inside his house and is one of the few who can still enter the facility during the abatement.

Vickers, 65, who disputes the abatement and the means by which it was executed, said he is essentially a victim of the many people – some of whom are homeless – that he let stay at his property the last five years.

“I met a couple homeless (individuals); it was cold, rainy (so) I let them stay (here),” Vickers said. “They started to terrorize the place and steal from me.”

Lori Benningfield, 37, said Vickers is a victim of elder abuse.

Benningfield said Vickers will stay with her in a house that Vickers also owns, to help him get back on his feet.

“All the homeless he helped contributed to this,” said Benningfield, who has rented from Vickers for the last five years. “He paid them to help clean (the property) and they took his money and never cleaned it.”

Benningfield feels that Vickers was taken advantage of by both his former houseguests and county and law enforcement officials.

“They (code enforcement) weren’t supposed to touch the house or his personal property,” Benningfield said. “Now he has to be out and has till tonight to retrieve (everything).”

Clark disputes the claim that there is a deadline on Vickers’ personal items.

He is allowed to come back to retrieve his belongings, Clark said.

Alfred Gardner, who has lived on the other side of the fence of the abated property since 1978, said he has made several public safety complaints regarding his neighbors.

“My main concern was safety and home value … The property value on my house just plummeted,” Gardner said. “They had a lot of drug addicts going in and out, the police were called over at least two or three times a week, you could near gunfire over there.”

For a short time, Gardner assumed legal guardianship of his step granddaughter, who at the time was 8-10-years-old.

He said all the problems “continuously had been getting worse,” which had him concerned for his family as well.

Gardner said the abatement will give the whole neighborhood a different outlook.

“I just hope it stays that way,” he said.