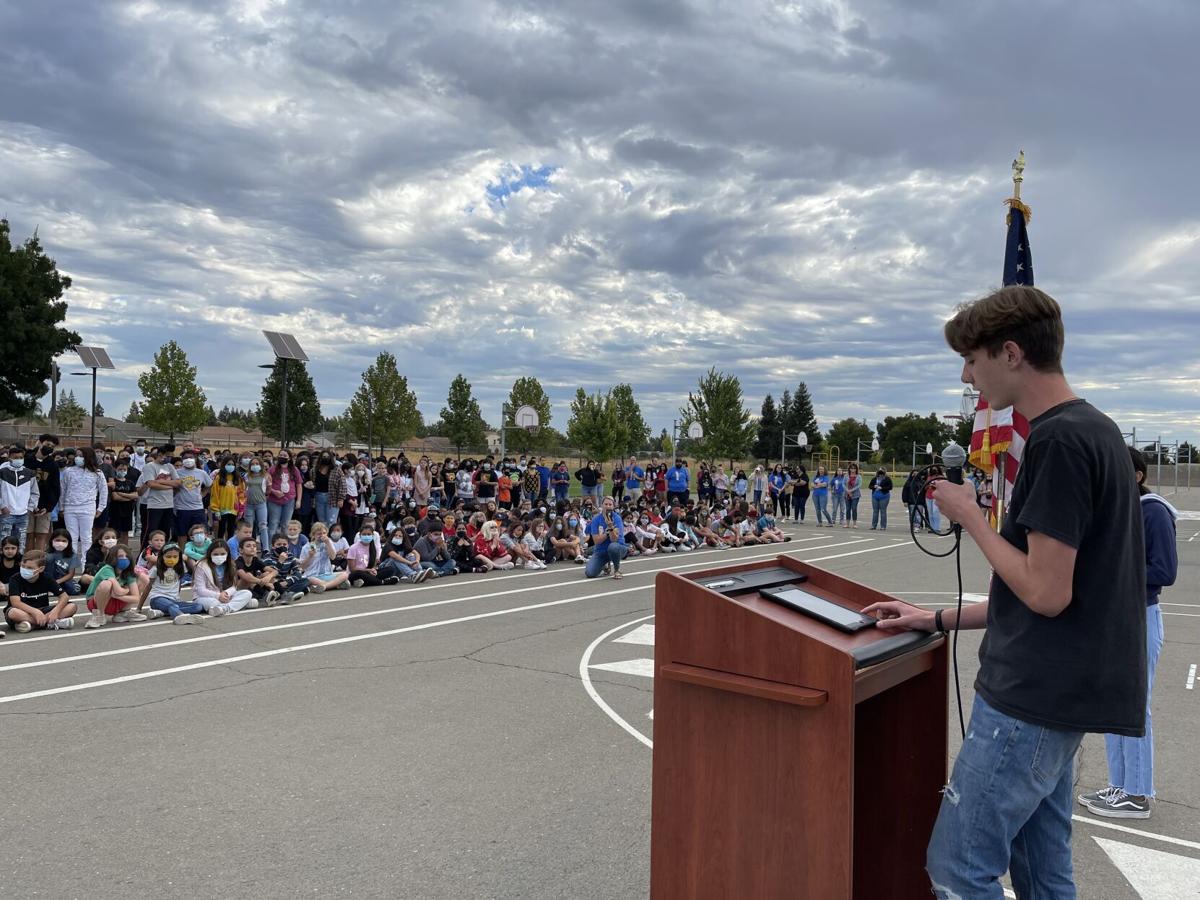 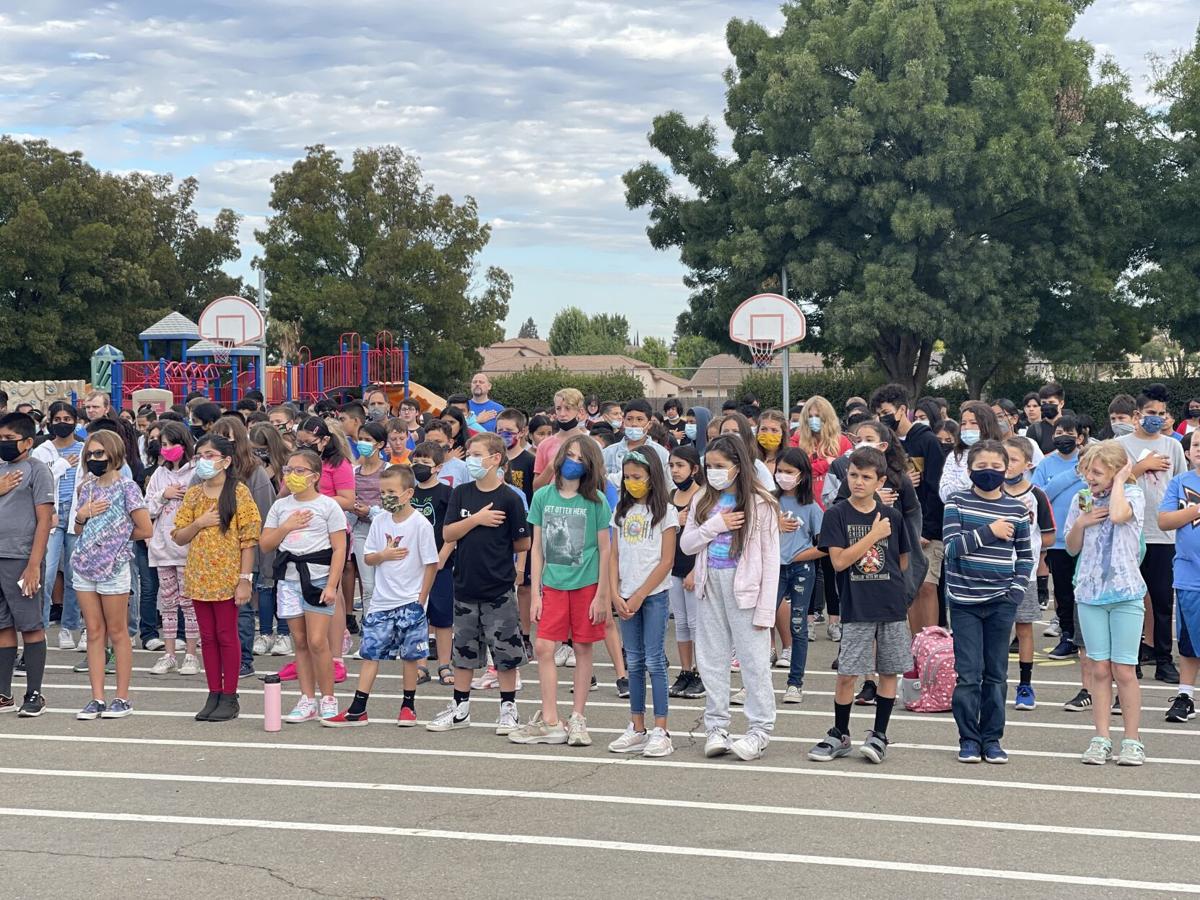 Students raise their right hand to their heart Friday as the national anthem is sung at Riverbend Elementary School in Yuba City.

Students raise their right hand to their heart Friday as the national anthem is sung at Riverbend Elementary School in Yuba City.

As the national anthem was sung, Riverbend Elementary School students proudly raised their right hand to their heart during an honorary event hosted on Friday to commemorate the 20th anniversary of Sept. 11, 2001.

A tradition held at the elementary school every year since 2008, more than 100 students and 150 staff members were in attendance. Among the crowd, there were also members of the city council, the Sutter County sheriff, the fire department, school board members and other local dignitaries that participated in the ceremony.

“It’s very important to keep the memory of the fallen in our hearts and minds and to educate the kids on this tragic event that happened back on September 11,” said Jevan Bains, principal of Riverbend Elementary School. “If we don’t bring awareness, if we don’t talk about it and come together as Americans, this next generation will not know about it.”

During the 9/11 remembrance ceremony the student body president of Riverbend Elementary School, Luke Michaelis, delivered a speech asking for a moment of silence at the end. His speech was followed by the singing of “The Star-Spangled Banner” by parent Joyce Cambell. The Pledge of Allegiance was then led by vice president of the student body and eighth-grader Nolan Carney. All students proudly clapped, raised their hands to their hearts and were joyous to see the community’s first responders there.

“We’re here today to help support the leadership program,” said Sutter County Sheriff Brandon Barnes. “Principal Bains made us aware of the event today where they gave some speeches in regards to 9/11 and public service and we wanted to come out and really show our support to the kids because the leadership program in and of itself is developing the future leaders in our own community. And so we’re very happy to see that the schools invest in the kids but we also want to invest in the kids as well.”

The leadership program at Riverbend Elementary School is an elective course for students who get elected to lead as school officers, said Bains. The yearlong class focuses on positive leadership values like self control, safety, respect and responsibility. Students in the leadership program help coordinate student-wide events and participate in activities around the campus. The leadership team also helped run the commemorative ceremony for 9/11.

Other important local dignitaries like the president of the Sikh Temple were there to show their support and represent the Sikhs and Punjabi community, some that were victims of hate crimes after the 9/11 attacks. Approximately 15,000-18,000 Punjabi Americans reside in the greater Yuba City area, according to the Pioneer Punjabis Digital Archive of UC Davis.

“When Sihks were targeted, it was these kinds of events that made awareness to let people understand who we really are and so I am happy to be here representing our Sihk community,” said Sarb Thiara, president of the Sikh Temple Tierra Buena. “We’re always out helping anyway we can for the next generation of the kids so they can understand that we’re all Americans here and we need to go forward.”

Lonetta Riley, Yuba City Unified School District board president, was also among the crowd of participants in support of the ceremony hosted by principal Bains and the students of Riverbend Elementary School. Riley expressed her gratitude toward the principal for hosting a ceremony that honors the memory of the lives lost on 9/11.

“It’s important that we continue to remember because if we don’t, history has a way of repeating itself when we don’t remember tragedies like that,” said Riley. “I think the fact that Mr. Bains is having a ceremony at an elementary middle school is a good thing, because these children don’t know anything about that. And it’s a part of history. It’s a part of who America is and how resilient we were to come back from something as tragic as 9/11.”