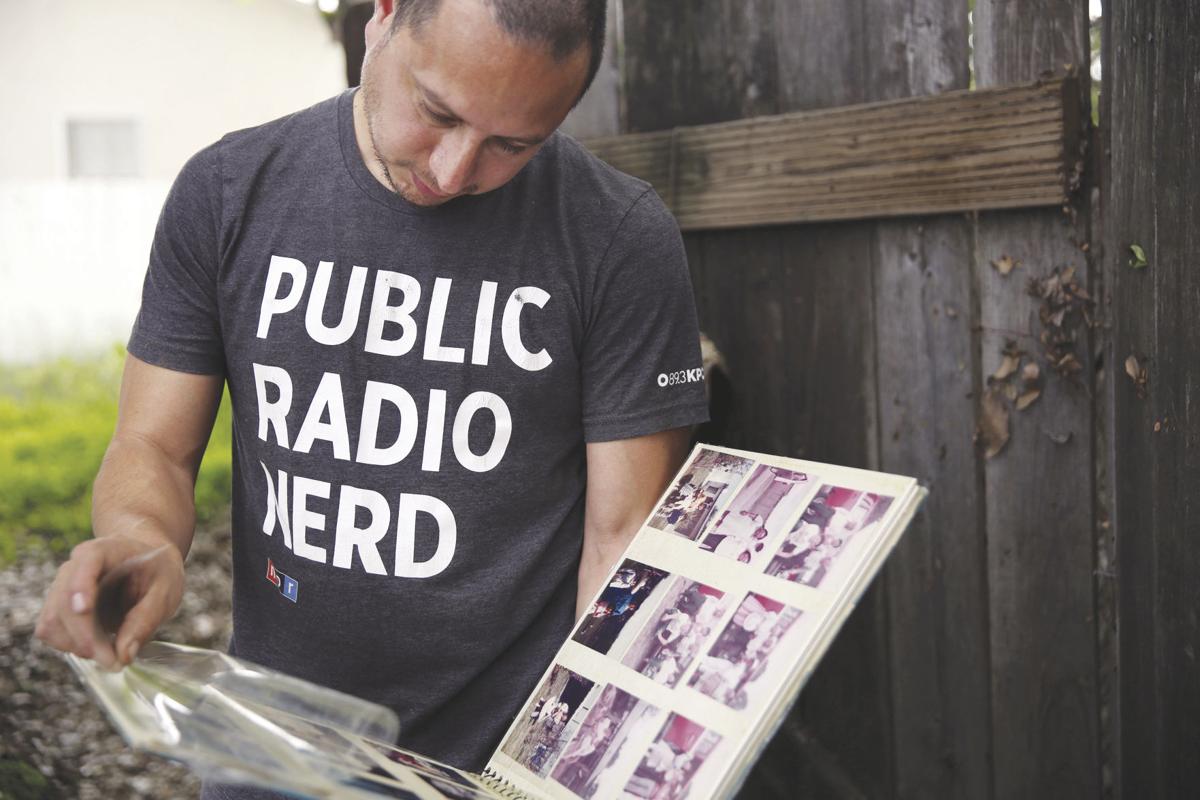 Hugo Torres looks through a family album on March 31, 2020 in Monrovia, Calif. Torres was 9 when his family went through the Mexico City earthquake of 1985. It was a tough time and he is using the lessons he learned from his mother back then during the coronavirus pandemic. (Dania Maxwell/Los Angeles Times/TNS) 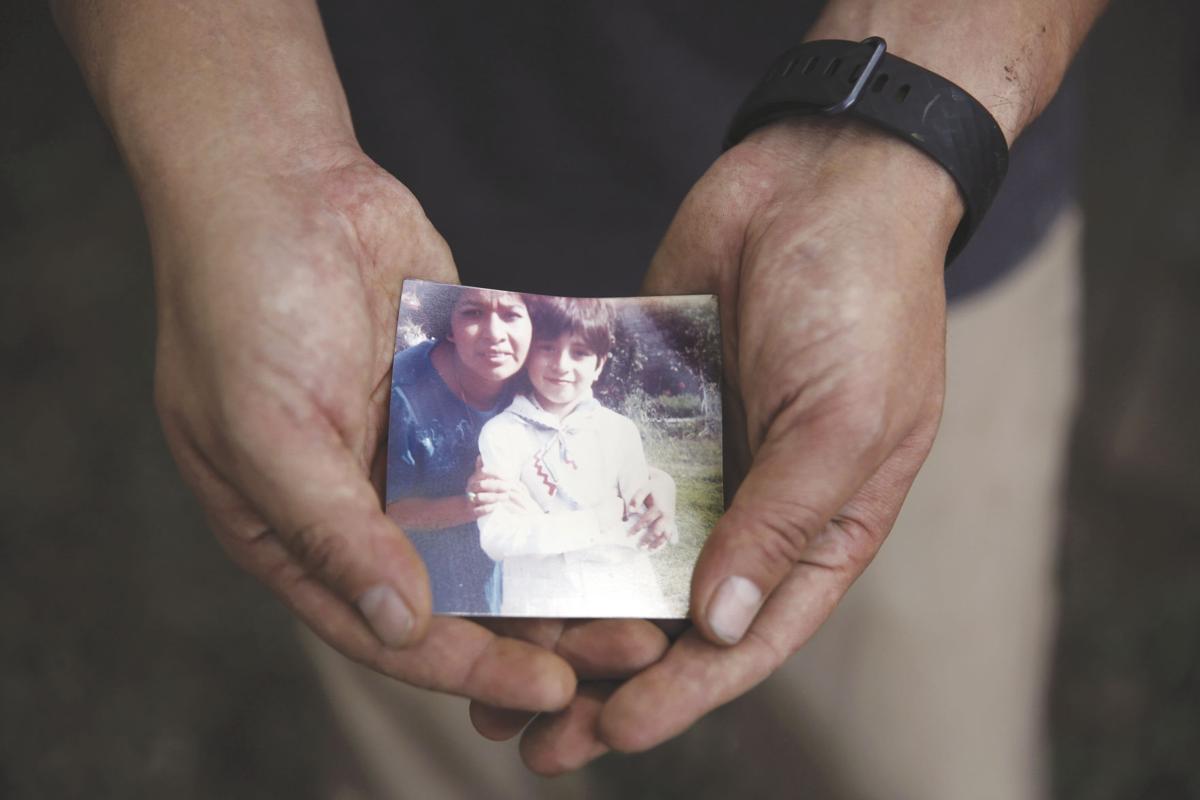 Hugo Torres holds a picture of himself as a 7-year-old with his mother Maria Luisa Castillo while at home on March 31, 2020 in Monrovia, Calif. Torres was 9 when his family went through the Mexico City earthquake of 1985. It was a tough time and he is using the lessons he learned from his mother back then during the coronavirus pandemic. (Dania Maxwell/Los Angeles Times/TNS)

Hugo Torres looks through a family album on March 31, 2020 in Monrovia, Calif. Torres was 9 when his family went through the Mexico City earthquake of 1985. It was a tough time and he is using the lessons he learned from his mother back then during the coronavirus pandemic. (Dania Maxwell/Los Angeles Times/TNS)

Hugo Torres holds a picture of himself as a 7-year-old with his mother Maria Luisa Castillo while at home on March 31, 2020 in Monrovia, Calif. Torres was 9 when his family went through the Mexico City earthquake of 1985. It was a tough time and he is using the lessons he learned from his mother back then during the coronavirus pandemic. (Dania Maxwell/Los Angeles Times/TNS)

The phone rings every few hours.

From his home in Washington, D.C., Haris Tarin, 41, does his best to answer his mother’s calls. These days, he knows how much it calms her to hear the voices of her children, spread across three states.

“She’s been through so much, she’s constantly afraid of the worst happening, of losing everything,” Tarin said. “I understand her. I’ve inherited the same anxiety.”

For families who have survived untold hardship – war, persecution, natural disasters – the coronavirus pandemic has provoked a mix of emotions and coping methods. There’s a lingering trauma, an instinct to protect your own, to focus on life’s most urgent needs. In some cases, the elders who lived through the worst of times, many of them immigrants, have become the greatest source of strength.

Tarin’s mother, Latifa Tarin, doesn’t linger on lectures or advice. When she calls from Phoenix, she wants to know if her son, a senior policy adviser for the federal government, has enough money in his bank account. “I’m going to send you something,” she says.

Back in Afghanistan, when life was good, the mother of six used to manage every detail of her home while her diplomat husband traveled.

After the Russians invaded in 1979, the Tarins, like millions of families, lost everything. Latifa forged ahead alone, smuggling three of her kids into Pakistan to reunite with her husband. For three weeks, the family rode at night on camel and donkey over rugged mountains as helicopters rumbled in the sky, threatening to bomb them.

Tarin was 6 years old. He was so terrified, he’d sometimes vomit from the nerves. He’d watch in awe as his mother, barely 5 feet tall, would scold the gun-toting smugglers if they tried to cheat them out of food – all paid for in advance by Latifa.

“If she needed to scream, she would scream at them,” he said. “She did everything to keep us safe.”

Today, as the COVID-19 death toll swells by the day, it is Tarin and his siblings who do everything to protect Latifa. She lives in an apartment attached to her second eldest son’s home. She used to see several of her children and grandchildren daily. Now, she sees their faces only in photographs that decorate her walls.

“Are things getting any better out there?” she often asks by phone.

“No,” Tarin tells her. “People are still dying.”

Recently, Latifa lost a family friend to the virus. She knows about 10 others who also got sick. Not long ago, she revealed to Tarin that his great-grandfather and great-uncle died in the 1918 Spanish Flu pandemic.

“I could tell that in her mind she was still trying to piece it all together,” Tarin said.

Many Afghans like to call themselves resilient, he said. They’re expected to be tough, to move forward.

“But there’s trauma and pain that comes from going through so much.”

Hugo Torres has learned by now that life can change in just an instant.

He was a boy, just 7, when Mexico City’s 1985 earthquake struck, killing an estimated 10,000 people and leaving tens of thousands injured or homeless.

The morning of the magnitude-8 quake, Torres’ mother, Maria Luisa, was rushing to get the kids out the door for school. When the ground began to jolt, his mom and youngest sister were flung across the floor. “We were so shook up, terrified,” Torres said.

Moments later, they learned they’d been fortunate. The city was devastated. Their little, brick house was nearly intact. But for the next five months, the family would go without electricity or running water. They struggled to find the most basic necessities.

Maria Luisa had to stand in food lines for hours. She left her son in charge of his sisters, 5 and 3 years old.

“Every time she left, it was turmoil for me,” said Torres, now 42 and living in Monrovia. “I thought the earth would fall apart and swallow her up.”

Over time, the responsibility Maria Luisa placed on his her son’s shoulders influenced him in countless ways. It prepared him for the uncertainty of this pandemic.

“This is the biggest thing we’ve faced since then,” said Torres, a Realtor. “But I know how to buckle down, how to tighten our belts and not add to the paranoia that’s out there.”

His mother, now 63, still lives in that humble brick house in Mexico City. She moved back a few years ago to care for her own mother. She’s stocked her shelves with plenty of food to weather the outbreak.

“She’s mighty and quite resourceful,” Torres said. “I know she’s going to be all right.”

Yoshio Nakamura was in 11th grade when his family received notice that they had two weeks to abandon everything they knew.

It was 1942, Pearl Harbor had just been attacked, and about 120,000 people of Japanese decent were stripped of their lands and incarcerated in desolate camps.

“It was demoralizing,” Nakamura, 94, said. “To be blamed for something you didn’t do, just because of how you look.”

The retired college administrator has found himself reflecting a lot lately on everything his family endured as he hears news of Asians nationwide being harassed or shunned due to the virus pandemic. It’s hurtful to hear that Asians, yet again, are suffering consequences they do not deserve.

Sheltered at home in Whittier, he sometimes feels as powerless today as he did the day the government forced his Japanese immigrant father to surrender his small El Monte farm and board a train with his children to a incarceration center up north. Armed soldiers and century towers surrounded the premises. So did barbed wire.

Ultimately, the family would spend several years in captivity. They were later relocated to a more deserted camp in Arizona.

Looking to prove his allegiance to the U.S., Nakamura eventually volunteered to fight in World War II. He joined the 442nd Infantry Regiment, a unit composed almost entirely of second-generation American soldiers of Japanese ancestry.

Many days were filled with dread, but Nakamura said he’s grateful for his experiences. Along the way, he said there were teachers, fellow soldiers and mentors who looked after him and inspired him.

“You learn to have a little more compassion for others,” he said. “To appreciate all the things people are willing to do help you.”

Today, when he feels overwhelmed by the death toll, the scarcity of hospital supplies and misinformation, he thinks of all the health workers risking their lives.

He hopes that years from now, the world will remember them as heroes.