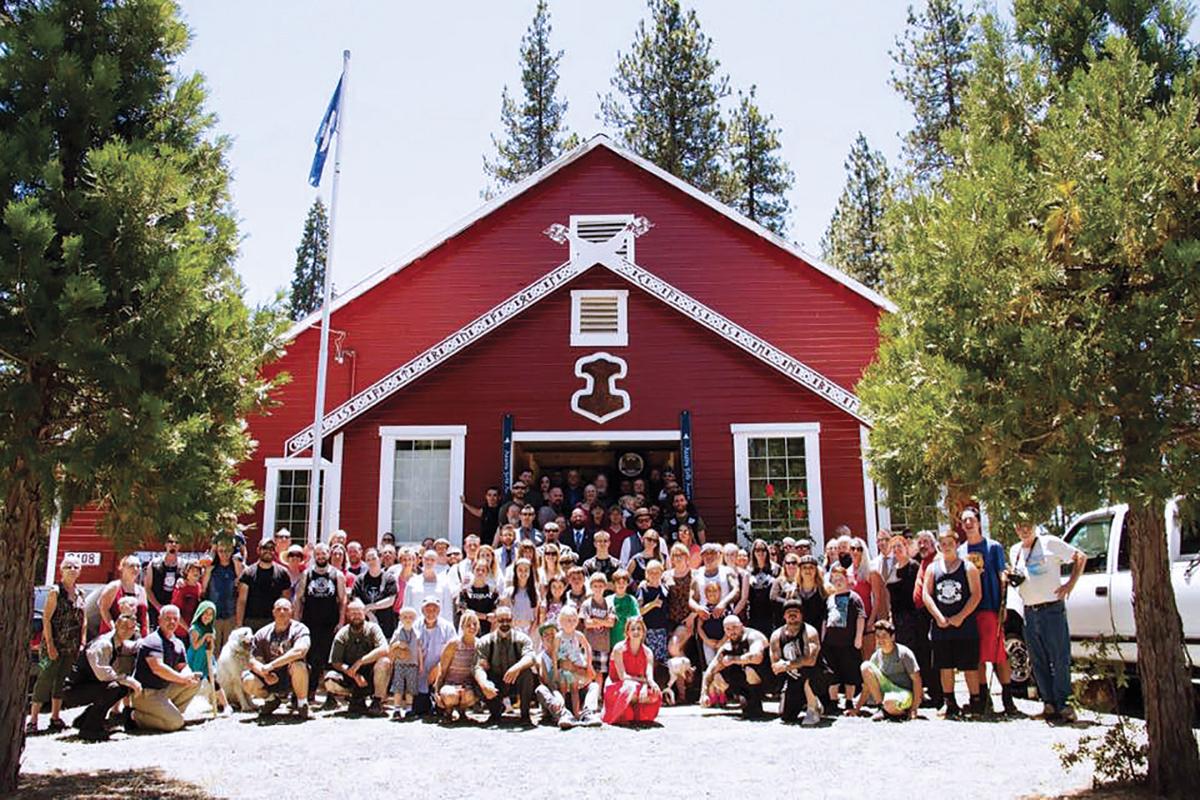 Members of the Asatru Folk Assembly stand in front of the organization’s main hall “Odinshof,” formerly the Grange Hall, in Brownsville in 2017. 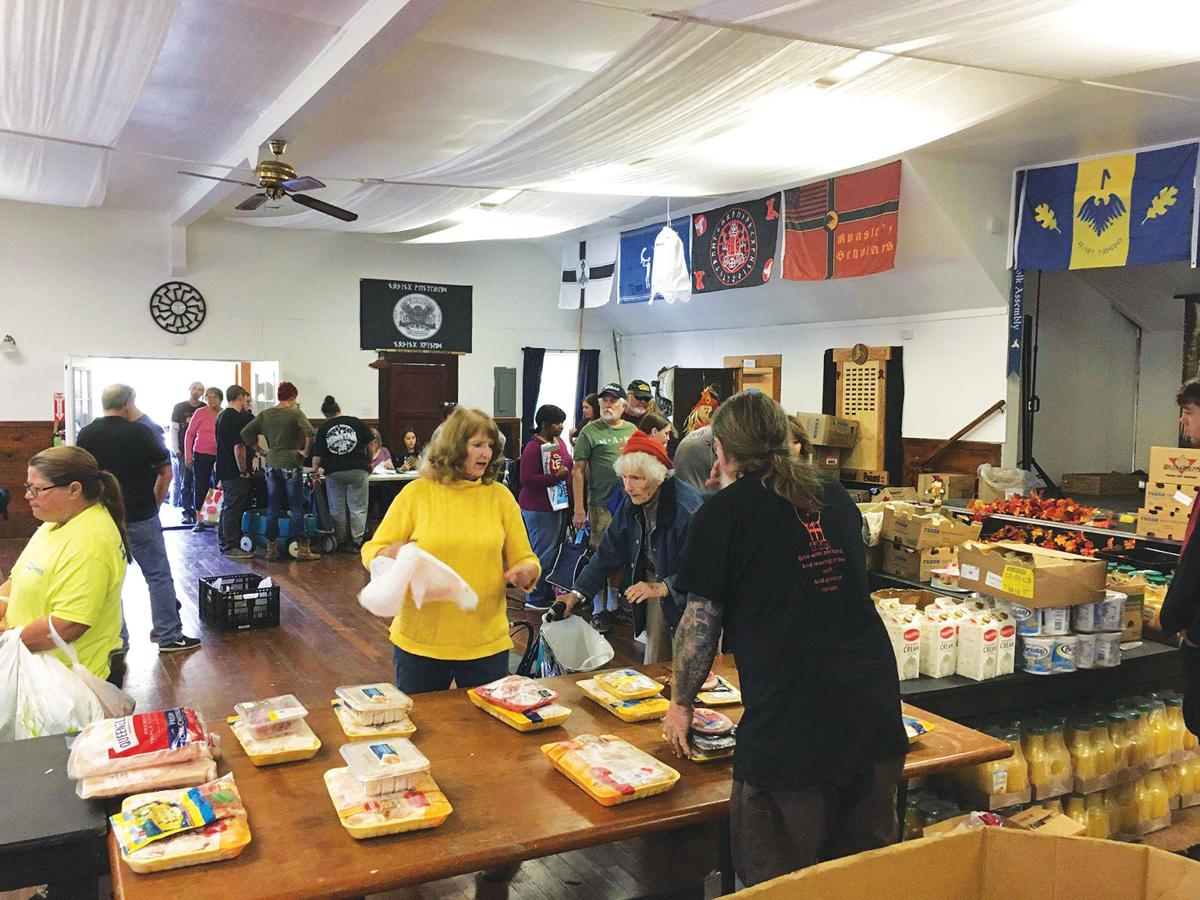 Volunteers from the Asatru Folk Assembly hand out supplies to Brownsville residents during a food bank inside the group’s main hall in November 2018.

Members of the Asatru Folk Assembly stand in front of the organization’s main hall “Odinshof,” formerly the Grange Hall, in Brownsville in 2017.

Volunteers from the Asatru Folk Assembly hand out supplies to Brownsville residents during a food bank inside the group’s main hall in November 2018.

The Southern Poverty Law Center has classified a Brownsville organization as a hate group. The Asatru Folk Assembly refutes that claim.

The SPLC, a national nonprofit legal advocacy organization, recently released its annual census of hate groups in the U.S. and classified the Assembly, headquartered in the old Grange Hall in the Yuba County foothills, as a “general hate group.” That’s defined as a group espousing “a variety of rather unique hateful doctrines and beliefs that are not easily categorized. Many of the groups are vendors that sell a miscellany of hate materials from several different sectors of the white supremacist movement.”

Matthew Flavel, the leader of the Asatru Folk Assembly, unequivocally denies the characterization. He said the church is devoted to pre-Christian gods of Europe.

“First and foremost, the Asatru Folk Assembly is not, has never been and will never be a hate group. We don’t do anything hateful; we don’t say anything hateful; we don’t waste our time and energy on that,” Flavel said. “...I think they are grossly mistaken in categorizing us as a hate group. I think they have extended that definition to include something that no longer has to do with hate.”

Flavel said Asatru is an Icelandic word meaning “true to the gods.”

The group’s Facebook page is filled with posts about preparing their land for the coming seasons, celebrating their Norse gods, and even helping their community by hosting a food bank.

Content on the group’s official website shows they’re called to preserve white heritage: “We want our children to grow up to be mothers and fathers to white children of their own. We believe that those activities and behaviors supportive of the white family should be encouraged while those activities and behaviors destructive of the white family are to be discouraged.”

In a 2016 Facebook post, the group posted about its belief in two genders and its idea of a traditional family unit: “The AFA would like to make clear that we believe gender is not a social construct, it is a beautiful gift from the holy powers and from our ancestors. The AFA celebrates our feminine ladies, our masculine gentlemen, and, above all, our beautiful white children.”

The organization is rooted in heathenism (a contemporary branch of paganism), which worships Norse gods and practices Icelandic, Germanic and Scandinavian spirituality, according to various online descriptions. The Asatru organization was founded in Grass Valley in the 1970s by Stephen McNallen who stepped down in 2016.

In 2017, following the AFA’s Facebook post about gender, McNallen took to YouTube to claim allegiance to the white race and white nationalism politics, invoking the “14 words,” a prominent neo-Nazi slogan. While saying he is not anti-non-white races, McNallen said he believes that interracial marriage will lead to the extinction of the white race in the U.S.

The principle of ethnic preservation is used in granting membership to the local church.

“When someone applies, we take a look at who they are, where they are from and how they represent themselves. Then, typically, a folk builder will evaluate them on if they meet our criteria or not,” Flavel said.

A folk builder is a regional representative whose job is to grow membership and help connect local membership to the greater body.

In an emailed statement last week, SPLC senior research analyst Keegan Hankes said AFA is designated as a hate group because of its “indulgence of myths of genetic purity, that race has a founding in biology; and because of its connections to the so-called alt-right and racist skinhead movements.”

Flavel said race does have a place in the church’s beliefs. He said there is a biological component to race, “a truth since the dawn of time,” and today’s political opinions don’t alter that.

“We are a folkish religion, as opposed to a universal religion. So, we believe each ethnic group has a right to their belief and to the divine, just like Native American faiths, African faiths and most indigenous faiths that are not part of the Abrahamic trilogy of religions,” Flavel said.

In Brownsville, the church has been volunteering to distribute food provided by the Yuba-Sutter Food Bank out of its main building, the former Grange Hall.

The AFA, which is also a nonprofit organization, has been distributing food once per month since July 2018. Hamilton said there haven’t been any reported issues or complaints regarding the food pantry.

“The Yuba-Sutter Food Bank conducts unannounced on-site monitoring of all agencies associated with the food bank. Any agency or charitable organization that violates federal, state and local laws, or the contractual/ethics requirements of food bank membership are suspended pending investigation,” Hamilton said. “If the facts demonstrate a violation, the association with an organization is terminated.”

Flavel said the food bank work is typical of the church group; not hate and violence.

“We don’t turn anyone away,” he said.

Flavel said the church is focused and devoted to the gods and the betterment of the group and does it without being hateful or negative.

“The group has never been involved in violent activity, we’ve never promoted it. If a violent activity came to our knowledge, we’d deal with it immediately. Nothing we say or do is to promote violence or lawlessness,” Flavel said.

While Flavel, McNallen and other heathens deny being anti-non-white, their views romanticize a more palatable form of racism under the guise of ethnic preservation, experts and other practitioners say.

According to a Jan. 22 article in Iceland Magazine:

“Many neo-pagan groups in Europe and the U.S. who consider themselves observers of the religion of the Vikings, practice a religion which glorifies battles, militarism, masculine heroism and in some cases chauvinism, violence, intolerance and racism. Some white-power groups and members of Aryan Nation gangs practice these forms of paganism. Ásatrúarfélagi rejects this as a misreading of Ásatrú… Ásatrúarfélagi has cut all ties with foreign associations of pagans after receiving harassment and hate mail from people who are angry with emphasis the association has placed upon equality and respect for human rights, especially LGBTQ rights.”

Sophia Fate-Changer, who goes by her heathen name, is part of Heathens United Against Racism, an international group that challenges what they call the bigotry practiced by neo-Volkisch groups like AFA. She grew up in Chico and when researching her beliefs as a young teen, stumbled upon heathenism. She joined the AFA briefly (after a lengthy process) when she turned 18 because she badly wanted a community to practice with. But as a person of mixed race, she said she was told she could be a target of abuse in their forums.

“That’s when the lights turned on,” Fate-Changer said in a phone interview Wednesday. “They were actually trying to deter me from their group for awhile… I never went to any meeting or posted in the forum after that warning.”

She said it’s important to speak out against these types of groups who look to recruit young and vulnerable people, and that challenging those ideals has brought her and other group members plenty of hate mail.

“It’s absolutely important, especially in places that are rural and so close to headquarters, because these people are actively recruiting moderates and conservatives and pushing them toward the alt-right,” she said. “If they see a power vacuum they go for it, and with such a political divide, this is a ripe time to get their numbers up.”

Flavel disagreed, saying the church doesn’t prescribe to any one political affiliation.

“That’s not at all what we are doing,” he said. “We aren’t actively recruiting any political segment nor pushing them toward a political ideology. We are just trying to bring our folk home. We focus on spiritual development.”

Seth Chagi, president of The Asatru Community Inc. of Thousand Oaks, has similar goals to Fate-changer – eradicating racism within heathenry groups and speaking out about the perversion of traditional symbols like Thor’s Hammer and runes.

“They don’t appear racist on the top, but some of their language is very disturbing,” Chagi said in a phone interview Wednesday. “It gives us a bad name… just because they’re quiet now doesn’t mean they always will be.”

Fate-Changer and Chagi said they don’t want others to be deterred from the path of heathenry, and challenge the idea that lineage dictates whether or not one is worthy of the practice.

“We believe that anyone can practice Asatru,” Chagi said. “If they feel the calling of the gods, they should be allowed to follow that calling and see where it goes.”

Flavel said the AFA disagrees with Chagi’s take on lineage.

“That’s why we are two separate organizations,” he said.