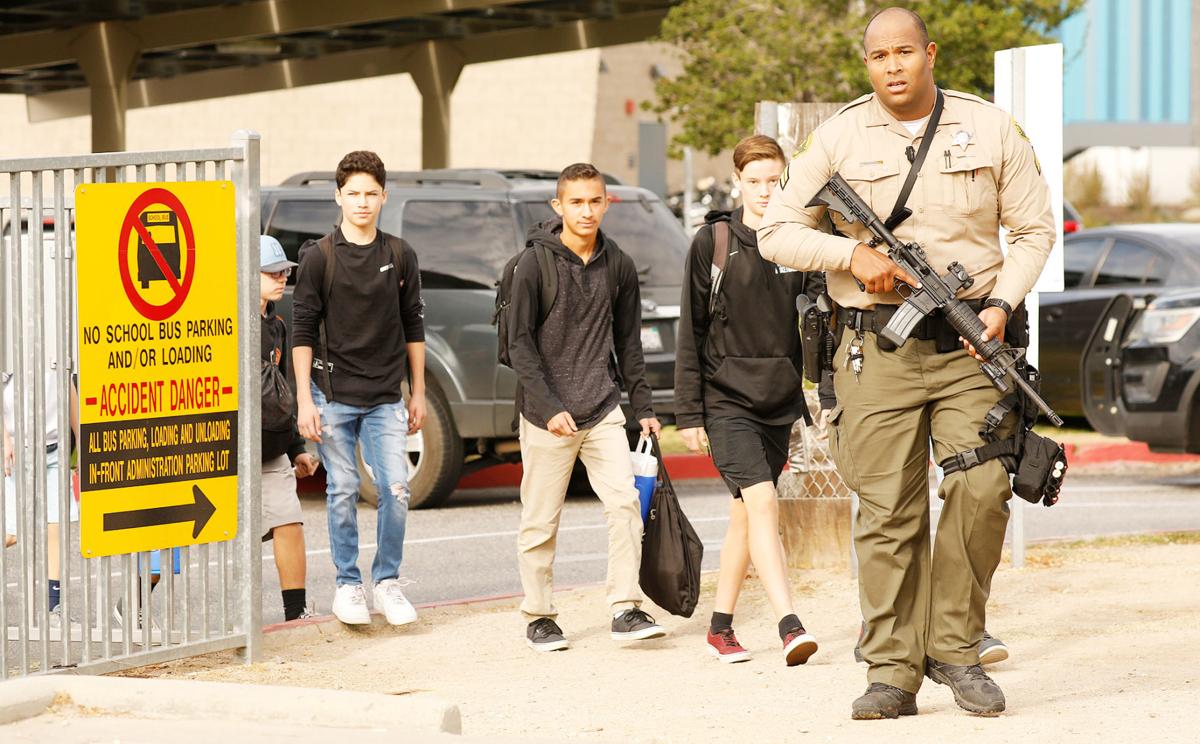 Students were escorted by police from Saugus High School on Nov. 14, 2019 after at least three people were wounded and two killed in a shooting when a gunman opened fire on the Santa Clarita, Calif., campus early Thursday. 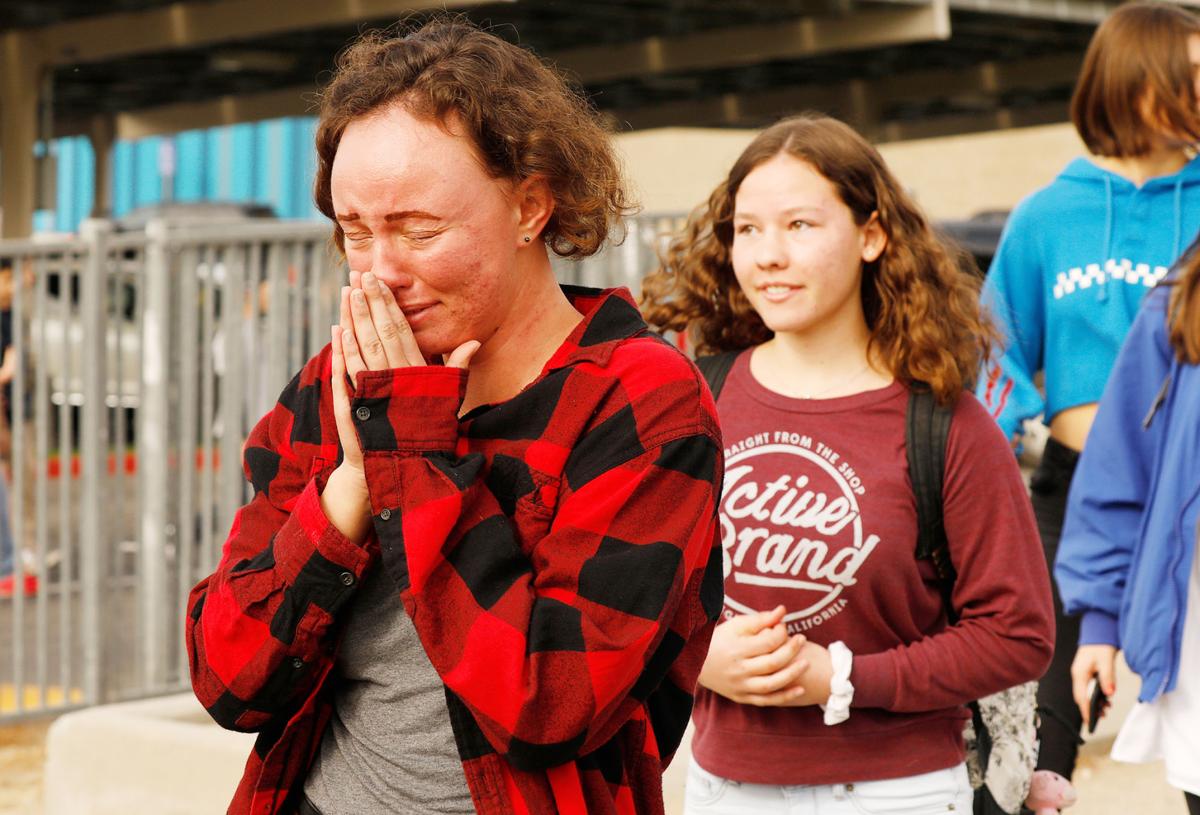 Some students were in tears as they were escorted by police from Saugus High School on Nov. 14, 2019, after at least three people were wounded and two killed in a shooting on the Santa Clarita, Calif., campus early Thursday.

Students were escorted by police from Saugus High School on Nov. 14, 2019 after at least three people were wounded and two killed in a shooting when a gunman opened fire on the Santa Clarita, Calif., campus early Thursday.

Some students were in tears as they were escorted by police from Saugus High School on Nov. 14, 2019, after at least three people were wounded and two killed in a shooting on the Santa Clarita, Calif., campus early Thursday.

SANTA CLARITA – Authorities said the shooting at Saugus High School that left two students dead and three wounded Thursday occurred over a 16-second period in which a classmate pulled out a gun in the quad area and opened fire.

The gunfire broke out at 7:30 a.m., when students at the school were scheduled to be in their first-period classes, said Los Angeles County Sheriff Alex Villanueva.

Paramedics swarmed the campus, treating the wounded, while deputies, a SWAT team and federal officials searched nearby neighborhoods for a 16-year-old boy they thought had fled after the shooting. Authorities later said the suspect, identified by neighbors and sheriff’s officials as Nathaniel Berhow, was found on campus with a self-inflicted gunshot wound to the head.

Officials said he was taken to a hospital and is in grave condition. Before he opened fire, a message appeared on an Instagram account believed to be linked to him that said, “saugus have fun at school tomorrow.”

Sheriff’s Capt. Kent Wegener said the teen was standing in the quad when he pulled a .45-caliber handgun from his backpack and opened fire on other students before turning the gun on himself. It was the suspect’s 16th birthday, authorities said.

The scene at the school on Centurion Way was chaotic, with teenagers walking in a line behind armed law enforcement officers with their arms raised in the air. Many of the injured were treated in a grassy area on campus before being placed on gurneys and taken to ambulances in the school’s parking lot.

Some students remained locked in classrooms for more than an hour amid the massive police presence. Eventually, they were led off the school grounds by deputies. Some were in tears. As they walked, one student asked aloud a question on the minds of many others: “What kind of a world is this?”

Andrei Mojica, 17, was in his AP government class going over a worksheet when his teacher went outside and saw people running. Nobody in class panicked; then somebody opened the door and said there was a shooter on campus. His heart sank.

In an instant, about 30 students in the class were up and barricading the doors with desks and tables. They’d practiced this before, but “there was just something different about it from a simple drill to real life,” Mojica said.

The students sat in silence and had a fire extinguisher they were prepared to use as a weapon if anyone came into the classroom. They didn’t hear any gunshots.

“We had no clue whether the shooter was on the opposite side of campus or right outside our door,” Mojica said. “That fear made it feel like we were waiting in silence forever.”

The schools were briefly locked down as authorities searched for the shooter. Deputies had been centering much of their focus on the brushy area behind the high school adjacent to a creek. Law enforcement officials also searched the backyards of homes along Sycamore Creek Drive. After about an hour, authorities determined the suspect hadn’t left campus.

At Central Park, just down the street from the school, a stream of parents – some sobbing, others glued to their phones – gathered in a circle. They had been directed there by law enforcement to be reunited with their children.

A helicopter thumping overhead drowned out their crying, and sirens wailed. It was, by now, a familiar scene: Three weeks ago, officials and frantic Santa Clarita residents had gathered in this same park for a news conference during the Tick fire.

Nearby, a sheriff’s deputy gripping a large rifle asked a frantic woman whether she was a parent.

“Yes!” she said, sobbing. He pointed toward a group of parents and teens, standing in a clump.

One of the parents wrapped his arm over the shoulder of a teenage boy in a gray Saugus sweatshirt. The boy was hyperventilating and counting his breaths aloud.

Michael Harrison, 26, said he first became aware of the shooting when his younger sister, a 17-year-old senior, texted him, “there is a shooter, call 911.”

“I can’t even describe it, man,” Harrison said with a panicked laugh. “Imagine getting that text.”

Kimberly Simpson, 30, stood across the street from Saugus High’s main entrance, where dozens of emergency vehicles and sheriff’s deputies in tactical gear had flooded the street, some parking in private driveways. One deputy could be heard telling a parent that law enforcement was conducting a “systematic search” to clear all the classrooms.

Simpson’s 15-year-old daughter, a junior, was in class Thursday morning when a teacher ordered students to do what they had drilled for, referring to lockdown procedures.

“She’s freaked out. She’s scared,” Simpson said. “I don’t know if she’s going to want to go back.”

Anthony Breznican, 43, had just dropped off his daughter and son at elementary school when his wife alerted him to news of a shooter at nearby Saugus High. Breznican sprinted back to North Park Elementary, where parents began piling into the lobby as details emerged.

“You’ve got kids in little Pilgrim outfits planning to do their Thanksgiving pageant today walking out in tears,” Breznican said.

His 10-year-old daughter burst into tears as she told him that a kid had hurt people at Saugus High School. Although residents say Santa Clarita is an idyllic place, Breznican said it hasn’t been untouched by violence. Some members of the community were killed in the 2017 Las Vegas massacre. Others had friends affected by last year’s Thousand Oaks shooting.

Thursday’s shooting came two months after six students at the high school were detained on felony charges after authorities were alerted to threats the teenagers had made online. A Hart Union staff member discovered the social media posts “regarding committing acts of school violence” and alerted authorities, according to the Sheriff’s Department.

Detectives quickly determined who had made the posts, according to the agency. Villanueva said the threats were not connected to Thursday’s shooting.

Villanueva said his deputies have children who go to the school. One staffer had dropped off a family member at the school and was driving away when he saw children running from the school, and he was one of the first on the scene.

Officials said a search warrant was served at what they believe is the suspect’s home.

Brooke Hougo, 18, was getting ready to leave for school, which is two streets from her home, when she heard a boy pounding on her door.

“There’s a shooter, can you please let me in,” he screamed. “I need shelter.”

Soon, word began to spread about the suspect, and Hougo learned it was a boy she runs cross-country with. The two have talked before but never discussed anything in depth about their lives, she said. That day, they would have had second period together: AP psychology.

“I would have never expected anything like this,” she said. “He was just a quiet kid.”