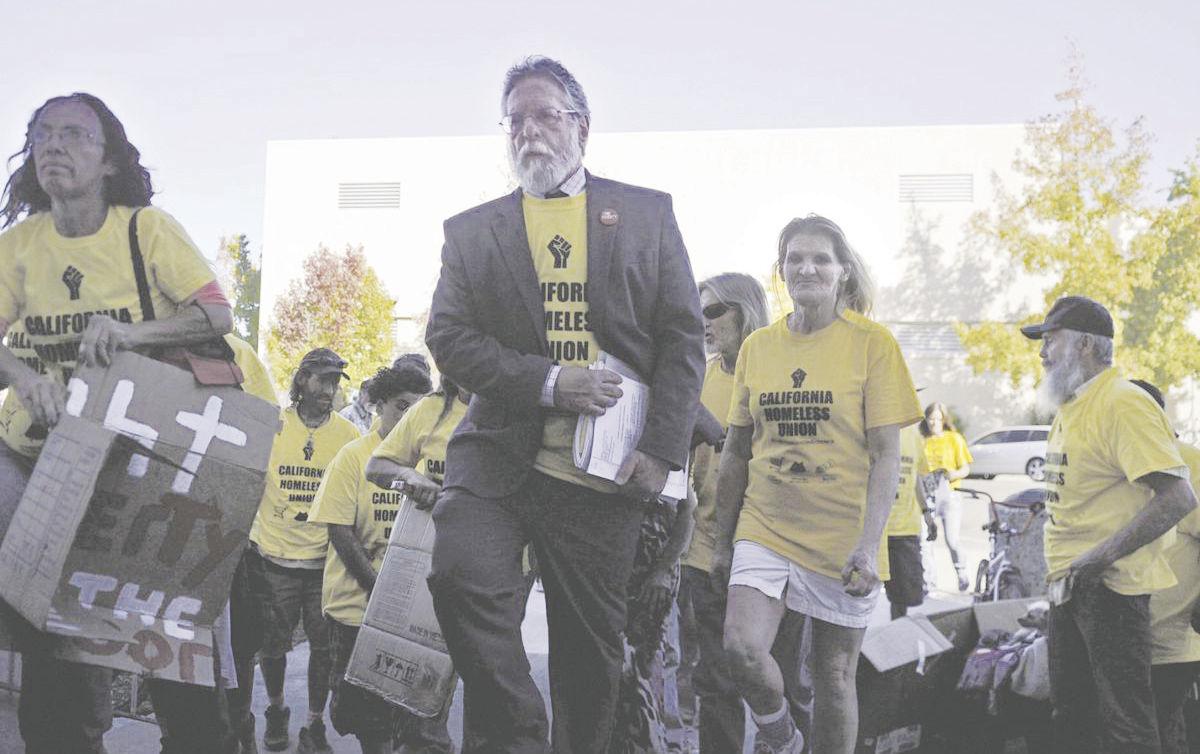 Attorney Anthony Prince walks up the steps of Marysville City Hall in October 2018 to file a copy of a federal class-action lawsuit on behalf of homeless people whose property was destroyed when encampments were cleared out in 2016. 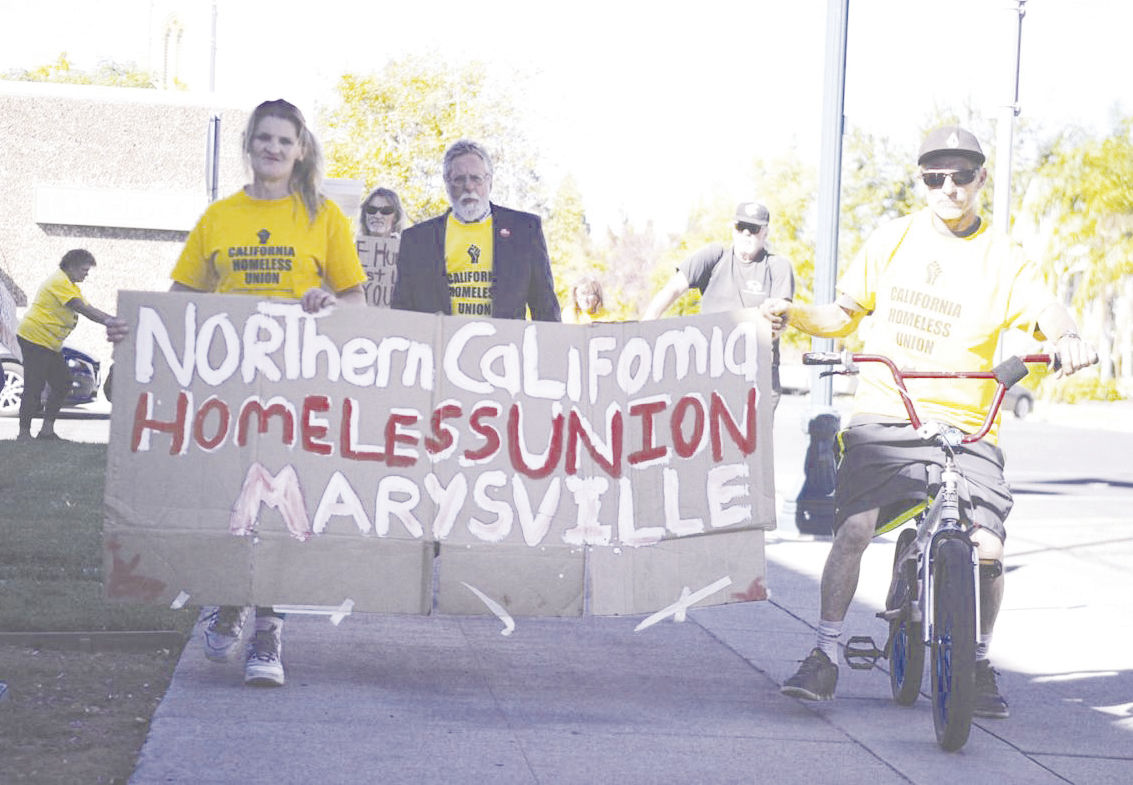 Raelynn Butcher, left, leads attorney Anthony Prince, and a 30-plus-member group of homeless individuals to the Marysville City Hall in October 2018, where they filed a copy of a class-action lawsuit against officials who carried out the clearing of homeless encampments in 2016.

Attorney Anthony Prince walks up the steps of Marysville City Hall in October 2018 to file a copy of a federal class-action lawsuit on behalf of homeless people whose property was destroyed when encampments were cleared out in 2016.

Raelynn Butcher, left, leads attorney Anthony Prince, and a 30-plus-member group of homeless individuals to the Marysville City Hall in October 2018, where they filed a copy of a class-action lawsuit against officials who carried out the clearing of homeless encampments in 2016.

A federal class-action lawsuit filed by a local homeless union in 2018 against the city of Marysville, Yuba County and others that were involved in clearing out homeless encampments and disposing of personal belongings between 2016 and 2017 reached a tentative settlement on Monday.

As part of the settlement, the city and county tentatively agreed to pay a total of $330,000 in compensation for those impacted by the clearing of homeless encampments.

Anthony Prince, one of the attorneys representing the Marysville Homeless Union in the case, said the tentative agreement must first be approved by the respective agencies and decision-making bodies in Yuba County and Marysville, as well as some of the plaintiffs in the case that weren’t present in court before it becomes official.

“When that happens, assuming all the parties sign off, we will have a settlement that calls for substantial financial compensation to those who had property taken from them and destroyed during that, roughly, one-year period,” Prince said. “…We feel this is a very important development and that Yuba County and Marysville needed to be held accountable for when they go into these encampments, break them up and take personal belongings. Going forward, the homeless union will continue to fight for the homeless and for accountability.”

The complaint filed by the plaintiffs alleged that their civil rights were violated in 2016 when hundreds of homeless people were removed from a number of encampments located throughout the city and county and their property was seized or destroyed with little or no effective notice.

Some of the biggest homeless encampments that were cleared out in the operation included Hollywood Trailer Park, the Horseshoe area and the Thorntree encampment. Officials at the time said the cleanups stemmed from health, safety and environmental concerns.

Thirteen plaintiffs were named in the lawsuit, though the class action covered many other homeless individuals that were impacted by the clearing out of the encampments. Defendants named in the case included the city, county, elected officials and staff members at that time, as well as several other organizations or businesses that were reportedly involved.

Marysville Police Chief Christian Sachs, who was also named in the case as a defendant and was acting as city manager this week, said he was not aware of the terms of the settlement and therefore couldn’t comment.

Yuba County Counsel Michael Ciccozzi said there has yet to be a final settlement on the matter.

“There have been discussions regarding the potential terms of a settlement that would resolve the litigation,” Ciccozzi said. “Until such time as the federal court approves any settlement, which could take several months, nothing is final.”

Prince, who also serves as general counsel for the California Homeless Union, said the tentative settlement only resolved the compensatory aspect of the case and didn’t address the injunctive relief requests regarding camping ordinances. He said the agreement doesn’t tie their hands to pursue injunctive relief moving forward.

Ciccozzi said that neither the subject litigation nor any discussion of the terms of a potential settlement in any way affects the county’s recently enacted Camping and Storage of Personal Property Ordinance.

“When and if a final settlement is reached, we will comment further on that settlement,” he said.

Raelynn Butcher, one of the plaintiffs in the case and member of the Marysville Homeless Union, said the group is happy with the tentative settlement. She said the money will have a significant impact on a large group of homeless individuals that are expected to be compensated for their loss of belongings.

Bryan Brown, another plaintiff in the case and member of the union, said no matter how the compensation is divvied up among the hundreds of homeless individuals that will likely file claims for the funds, it’s going to have a positive effect in that community.

“This sets a precedent that they cannot violate the law without consequences,” Brown said. “So, we view it as an injunctive order in itself. This will help keep them honest.”

If the settlement is approved how it is currently structured, members of the homeless population that had ties to the encampments during that yearlong period would have an opportunity to file a claim seeking compensation.

“There were a few people that are on the claim that don’t even want anything, they just want them to stop doing what they are doing and to talk with us and not without us,” Butcher said. “Maybe if they involved us in the discussions, they’d get a better understanding of what’s going on and that we aren’t looking for handouts, we want real help. Most people just want to go home, so I’m hoping this little bit of money will help get them home.”