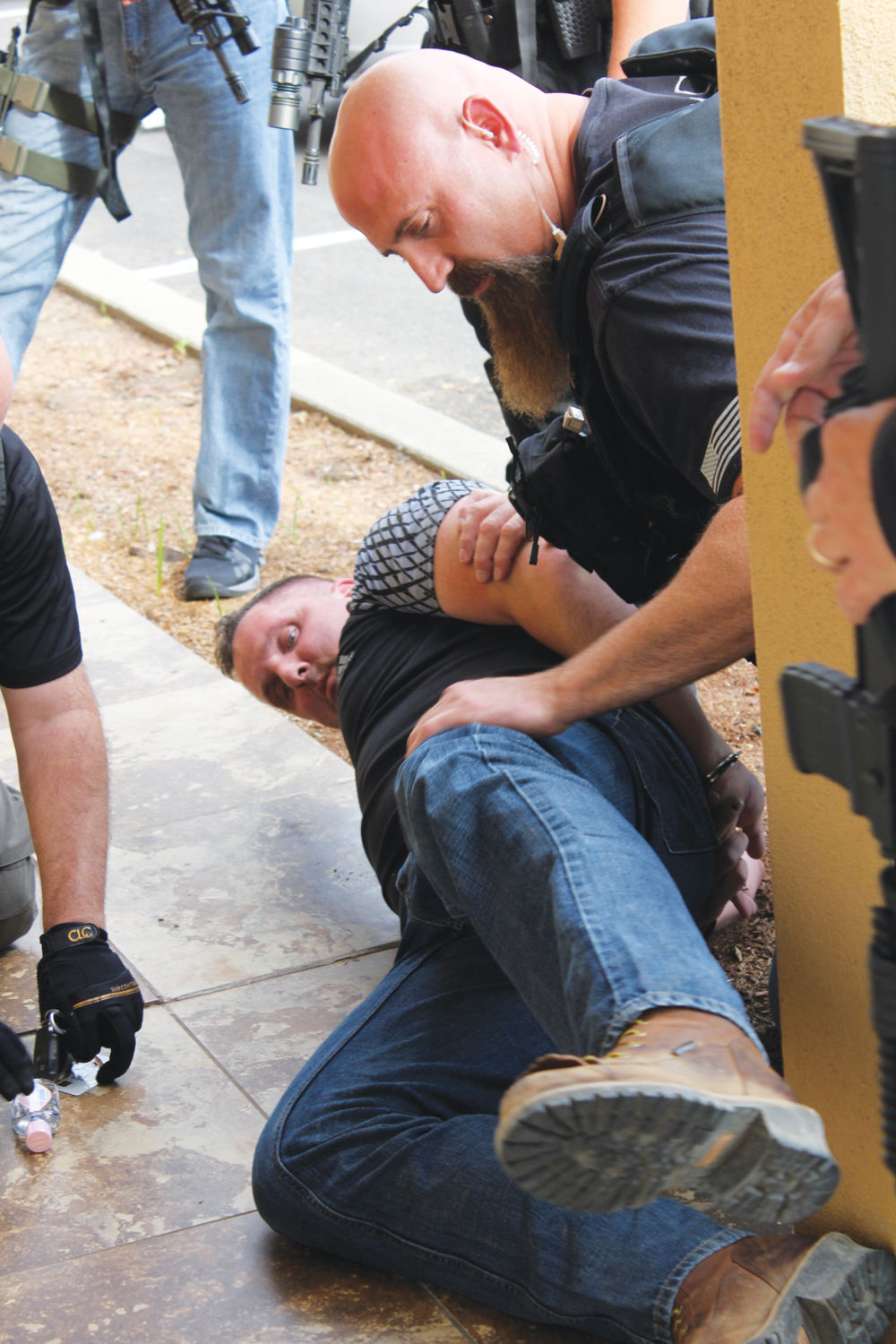 Jason Parker, chief investigator with the Sutter County District Attorney’s Office, searches Jeffery M. Albo in a child sex sting Tuesday afternoon in Yuba City. Albo was arrested after he showed up at a prearranged location allegedly to perform sex acts with a 9-year-old girl. He was allegedly found with condoms and a bottle of lubricant, which can be seen in the bottom left corner. 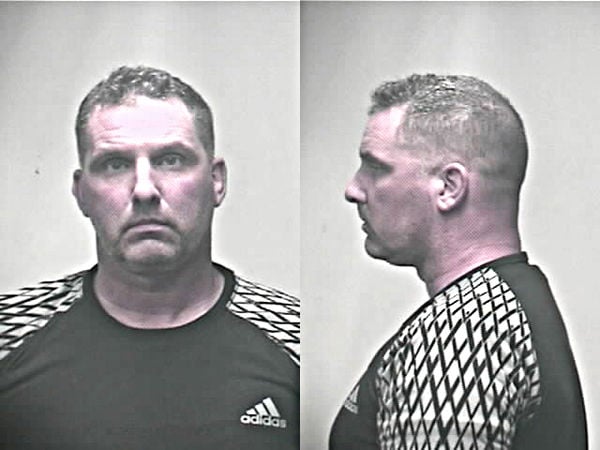 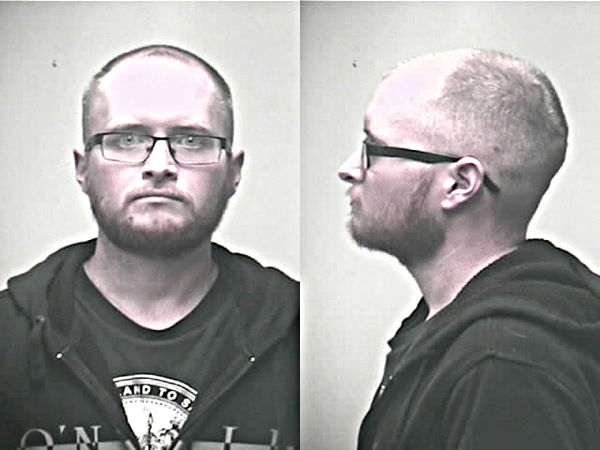 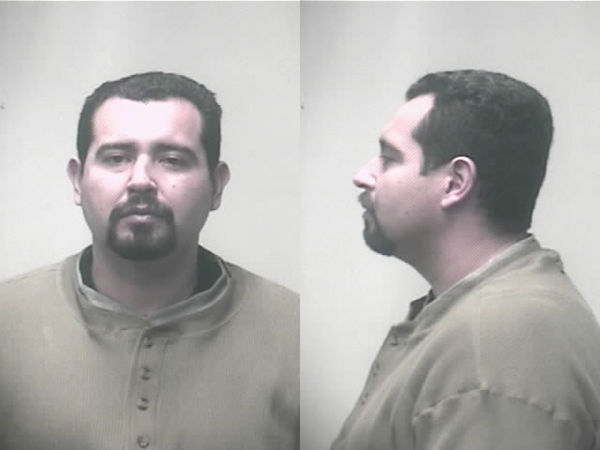 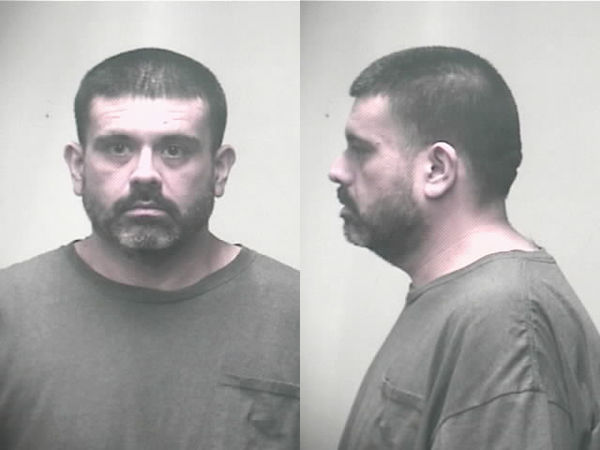 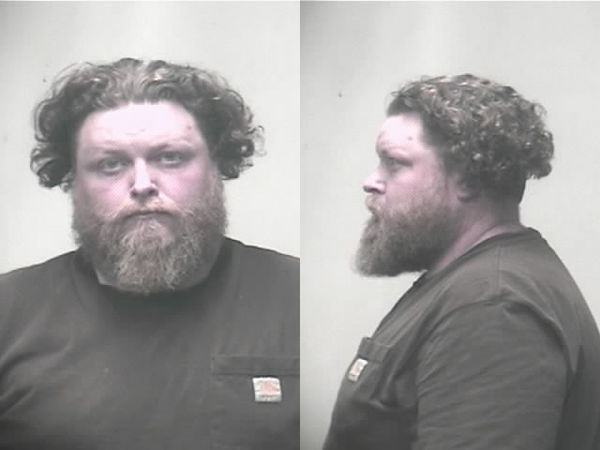 Jason Parker, chief investigator with the Sutter County District Attorney’s Office, searches Jeffery M. Albo in a child sex sting Tuesday afternoon in Yuba City. Albo was arrested after he showed up at a prearranged location allegedly to perform sex acts with a 9-year-old girl. He was allegedly found with condoms and a bottle of lubricant, which can be seen in the bottom left corner.

The child sex sting that led to a Yuba City planning commissioner's arrest and subsequent resignation was part of a months-long, resource-intensive operation that resulted in criminal charges filed against five other men.

The most recent arrests were Tuesday night, when two men were handcuffed and questioned after they separately showed up at a meeting location where they presumably planned to have sex with 9- and 14-year-old girls.

"When we set operations up, we know these guys are out there. Our goal is to go after them."

While similar stings have been conducted across the country for years, this is the first sting in Yuba-Sutter to focus on child sex crimes. It was created and led by District Attorney Amanda Hopper, with support from the Sutter County Sheriff's Office, the Yuba City Police Department and an outside organization, Operation Underground Railroad.

"Much of public safety is reacting to crime after it occurs. This operation was proactive," Hopper told the Appeal-Democrat in her first public statements about the operation.

Men who were arrested in the Sutter County stings are accused of reaching out to what they believe to be people offering children for sex. They allegedly clearly communicated what they would do with the minors, and showed up at a pre-arranged meeting, presumably with the intent to rape or molest children.

Defense attorneys representing men arrested in the stings, who were contacted by the Appeal-Democrat, said they were not yet familiar enough with the operation to provide a statement.

"A person is entrapped if a law enforcement officer engages in conduct that would cause a normally law-abiding person to commit that crime," Curry said. "It's an objective test. It doesn't matter subjectively what's in that suspect's mind. It looks at behavior of the government agent."

In this operation, detectives don't offer people any motivation or reason to come to the meeting, he said. For example, he said, they don't say "if you have sex with this child, she will be freed from slavery."

Staff from Operation Underground Railroad assisted the agencies in implementing the plan.

"We're a small rural community with limited resources," Hopper said. "Operation Underground Railroad provided the support, experience and education and resources that we would not otherwise have."

"One of the things the District Attorney's Office agrees with Operation Underground Railroad in, is the need to educate people about how real child sexual exploitation is, and that it's here and it's everywhere."

Details were not immediately available about how much staff time the operation cost.

"Every person there (Tuesday) had already worked full days and nights, and then more days. They put in the hours because they wanted to, because they had the opportunity to do good for Sutter County and to protect its children," Hopper said.

Sheriff J. Paul Parker said it's "absolutely" worth it for four or five of his deputies to work flex time or overtime to participate.

While most arrests of suspected sexual predators are made after a victim comes forward, the crimes the men caught in this sting operation allegedly committed have no real victims.

"It's cheaper to intercept (these crimes) before they occur than after they occur," he said.

After a sex crime has been committed against a child, "you have a victim, someone who has been traumatized for the rest of their life. How do you put a monetary value on that? You can't. This (operation) is a fiscally conservative approach," Parker said. "I think it's been very successful."

The seven arrested men don't seem to share any traits aside from their gender.

Aside from Ivin Rhyne Jr., a former Yuba City planning commissioner who works with the California Energy Commission, most of the men caught in the sting live in the Sacramento Valley, but outside of Yuba-Sutter.

Jeffery M. Albo, 50, from Washington state, told investigators he was in the area as a contractor for three weeks at Beale Air Force Base.

Albo and Timothy L. Neher, 40, were arrested Tuesday evening, after they separately showed up at different times at the meeting location. Both are married with children, according to court documents.

Law enforcement officials involved in the operation say the men are predators, and the operation allows those men to be weeded out. The point was argued Thursday during Albo's arraignment in front of Judge Christopher Chandler.

Although Albo has no criminal history, "This is the kind of crime that happens in secret," Curry said. "It takes a lot of resources for law enforcement to ferret out."

Albo's attorney, Chris Carlos, argued Albo has never been arrested, and it's "not appropriate to say he might have something out there. (He has) no criminal history."

Assuming Albo did what officers say he did, "he made a mistake," Carlos told the judge.

Each sting operation requires weeks of preparation. From start to finish, some 20 officers are involved.

"Every cop who works these goes, 'This is what law enforcement is about. This is what I always wanted to do'," Parker said.

On Tuesday evening, more than a dozen detectives gathered at a remote location to await the arrival of a suspect. Undercover officers posed to meet the suspect, as clearly armed officers on arrest teams waited nearby, prepared to cuff the suspect after a signal was communicated.

The suspect said he would meet at the spot when he left work.

In the days leading to the meeting, he and a few other men communicated with an undercover detective who claimed to have access to children available for sexual acts. There was no discussion of an exchange of money, only an interest in sex with children.

Audio and video surveillance was wired in the meeting location, which officers observed in a nearby room.

"Our hopes would be that we set up an operation and have no one respond," Parker said.

That hasn't been the case. At least one arrest has been made each of the five times detectives set up a location. On several occasions, men have expressed interest and arranged a meeting but never showed up.

"That's not a bad thing," Hopper said. "If they are legitimately hesitant about raping children, I want them to back out."

The first target suspect on Tuesday did not back out. As soon as he arrived, he was arrested. During a search, officers found in his possession condoms and a bottle of lubricant, Parker said.

Officers read him his Miranda rights and led him into the equipped room, where they asked him about the conversation they'd had leading up to the meeting.

Detectives off-site listened to the interview through a baby monitor.

After he was driven away to be booked into Sutter County Jail, detectives stayed on site and prepared for the next suspect's arrival.

"After my experience overseas, I went on a quest to find out more about trafficking. That's when I came in contact with Operation Underground Railroad and was invited to Sutter County," LaRoche said in statement provided to the Appeal-Democrat.

"Everyone who was present in Tuesday's operation has an interest in protecting children," said Sutter County District Attorney Amanda Hopper, whose office coordinated the sting.

(Editor's Note: Look for additional reporting on this topic in coming days, including more details of the sting operation, why those involved …