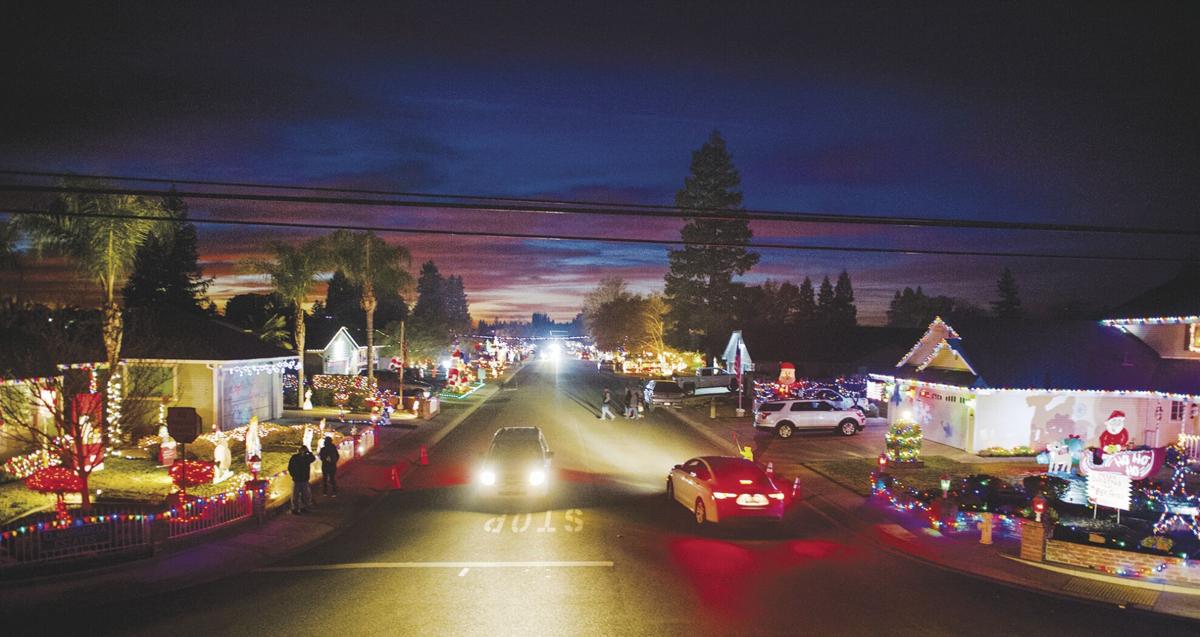 Christmas lights and decorations are seen on homes along Toyon Way in Yuba City on Sunday. 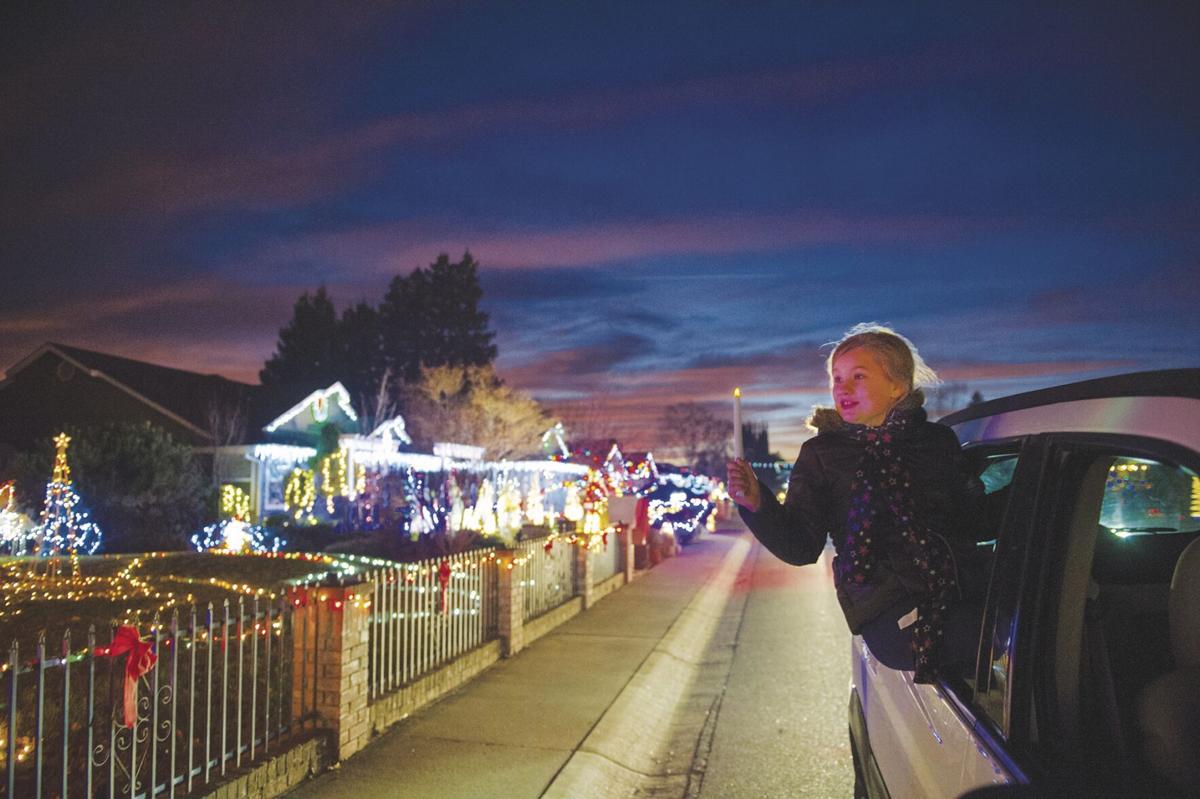 Zoey George, 10, of Yuba City, checks out the Christmas lights and decorations on homes along Toyon Way in Yuba City on Sunday. 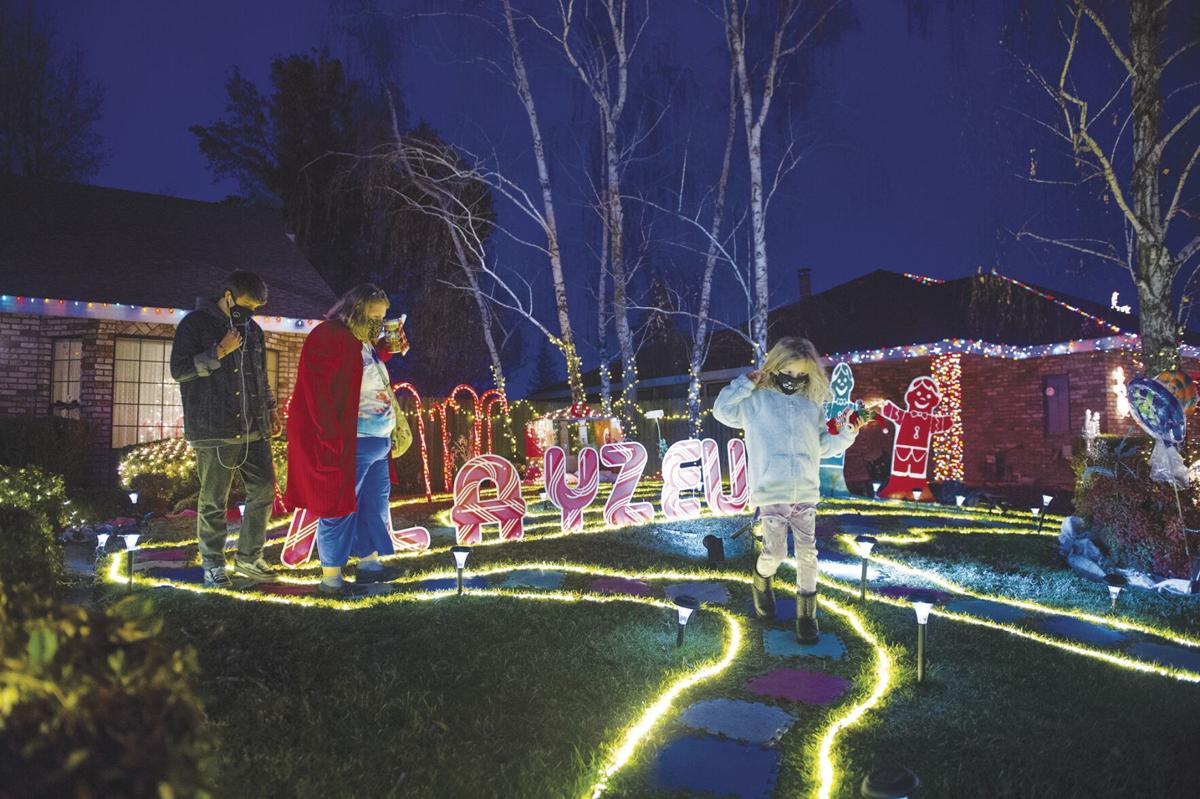 Mandy Gray, of Yuba City, with her children, Braden, 17, and Oriana, 7, walk along a pathway while checking out the Christmas lights and decorations on homes along Toyon Way in Yuba City on Sunday.

Christmas lights and decorations are seen on homes along Toyon Way in Yuba City on Sunday.

Zoey George, 10, of Yuba City, checks out the Christmas lights and decorations on homes along Toyon Way in Yuba City on Sunday.

Mandy Gray, of Yuba City, with her children, Braden, 17, and Oriana, 7, walk along a pathway while checking out the Christmas lights and decorations on homes along Toyon Way in Yuba City on Sunday.

“It’s like a parade but backwards, where all the houses are the floats and the people drive by and walk by,” said David Ryan, a resident of Toyon Way in Yuba City.

The neighborhood, located off El Margarita Road in northwest Yuba City, has been a popular, local holiday destination for many years where the majority of the residents go all out with Christmas lights and decorations.

“It’s a great tradition,” said Yuba City resident Mandy Gray. “We come every year and I remember coming as a child.”

Gray was checking out the lights with her children, Braden, 17, and Oriana, 7, all who walked through a Yuba-Sutter Playzeum-themed yard, decorated on Ryan’s yard.

“I really like to come and see all the decorations every year,” said Braden Gray. “People do some pretty cool things and it changes every year.”

Ryan, who moved away from the Bay Area and rented the house earlier this year with his wife, Patty, said they wanted to use their yard as a fundraiser for the Playzeum.

“The decorations were all done by the Playzeum and they did a great job,” Ryan said. “We’ve got hot cocoa and other goodies and are asking for donations to help the museum since they’ve been closed.”

Ryan was wearing a mask and rubber gloves, along with some other helpers, and said it was a challenge to safely serve people but it was worth the extra effort.

Having moved to the neighborhood in 2001, Jason and Lori Meinking are veterans of the Christmas light extravaganza in the neighborhood that includes El Margarita Road, Toyon Way, Red Bud Lane, Azalea Way, Imperial Way, Camellia Lane and Rose Lane.

“It’s great to put the lights up as a family after Thanksgiving and see all the neighbors doing it too,” Jason Meinking said. “My two daughters would hand out hot cocoa, candy canes and mistletoe every year but we’re not doing that this year because of the coronavirus.”

He said some good-spirited neighborhood razzing has taken place in previous years for those who don’t put up festive, holiday lights and decorations.

“Some neighbors would Grinch your house if you didn’t put up some lights or decorations,” he said. “There would be a little Grinch on your mailbox and it was all done in fun.”

The Meinking’s have solar power now but Jason said he’s seen an energy bill as high as  $1,500 in some years.

“In previous years, myself or a friend would dress up as Santa Claus but we’re not doing that this year,” he said. “Now, some people have set up fire pits on their driveways and that’s been working out good so people can visit from a distance and stay warm.”

This is Jaime and Quinn Miller’s third year living in the Christmas wonderland neighborhood and, despite the challenges associated with the coronavirus, she said the spirit of neighbors and passersby has never been better.

“Everyone seems to be out with a good vibe and I imagine people really want to get in the Christmas spirit,” Jaime Miller said. “When people drive by, we’re yelling Merry Christmas back and forth to each other to stay safe.”

She said her husband has a good system of getting the decorations out and set up after Thanksgiving, which is when most of the neighborhood comes to life with the Christmas spirit.

“As soon as Thanksgiving is over, you’re in decoration mode and the whole neighborhood is trying to have everything up by Dec. 1,” she said.

Miller said they’ve got lights on the house and a few inflatable decorations in the yard but the wooden Santa’s workshop cutout gets much of the attention since many passersby stop for a photo on that large, lawn ornament.

“I remember coming to the neighborhood as a kid and everyone having lit up Christmas trees in their yards and some people would leave out baskets of candy canes many people would hand out hot cocoa,” she said.