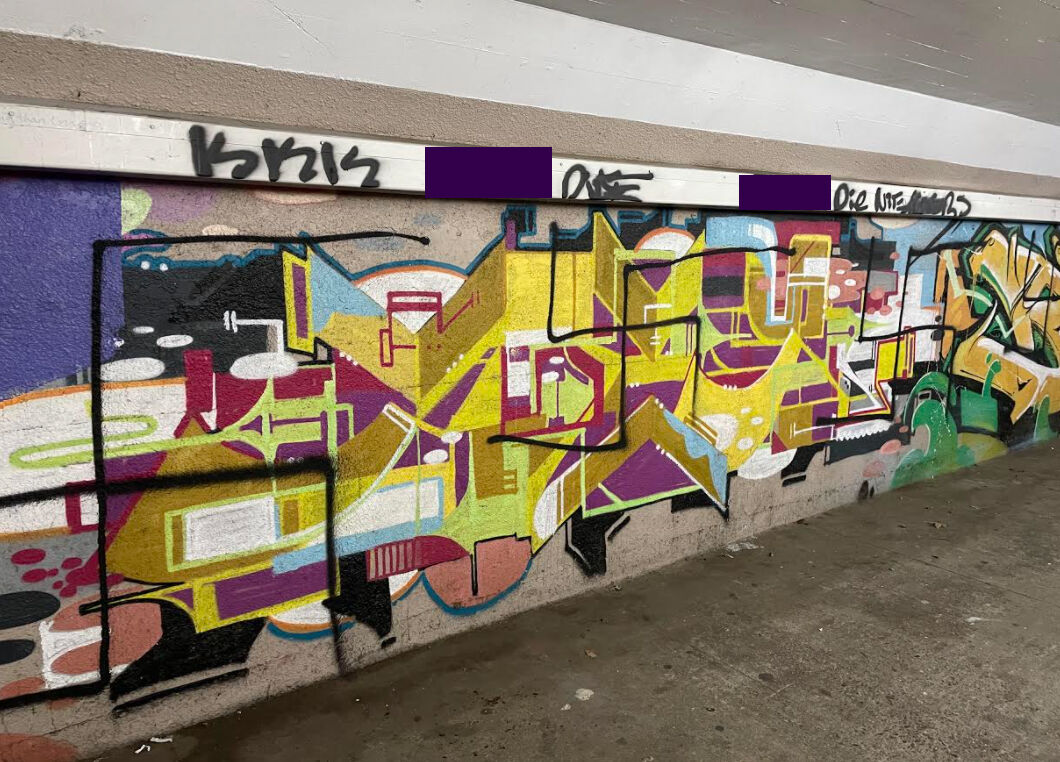 Hate symbols, such as swastikas, are seen covering a large portion of a mural inside a pedestrian tunnel near Marysville High School. 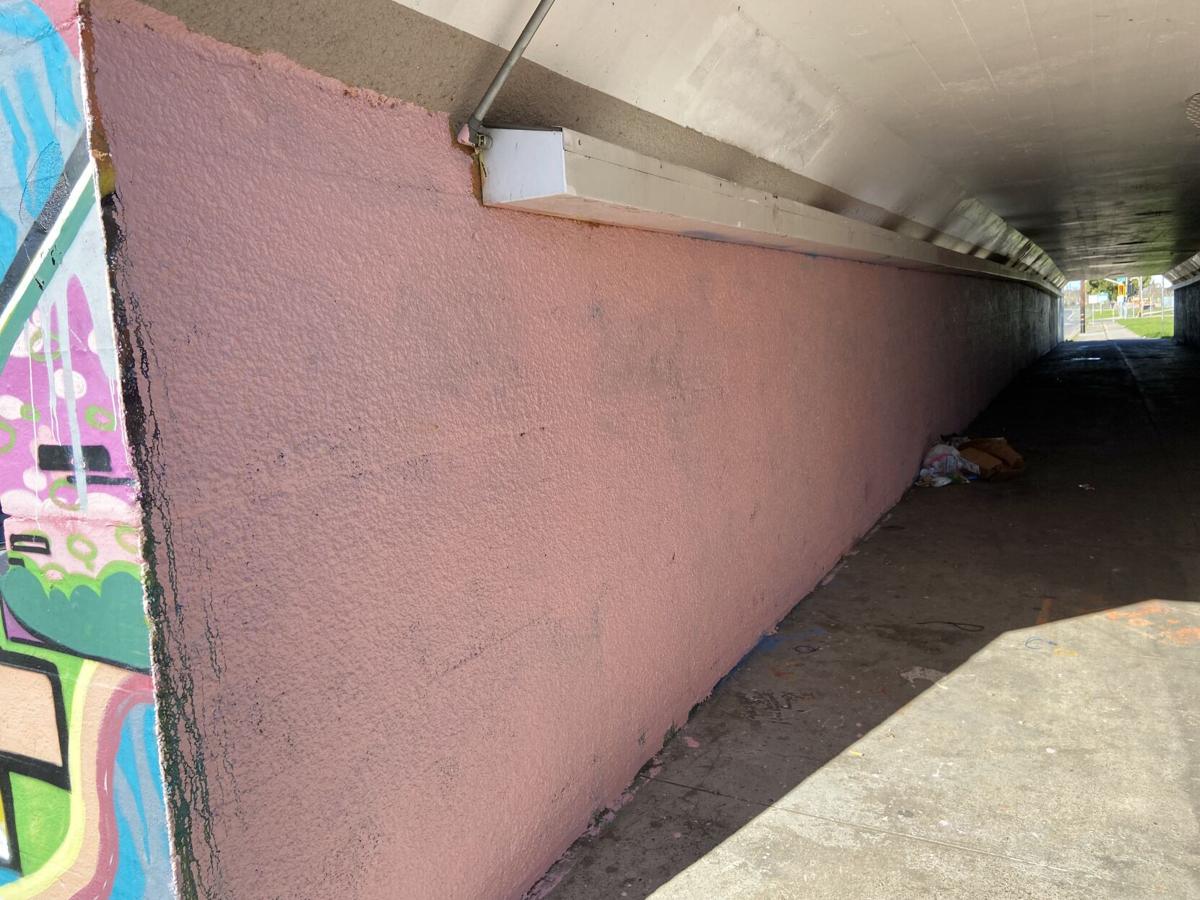 A large portion of the mural that once decorated the entirety of a pedestrian tunnel near Marysville High School was painted over in pink last week after hate symbols and speech were found scribbled over artwork within the tunnel.

Hate symbols, such as swastikas, are seen covering a large portion of a mural inside a pedestrian tunnel near Marysville High School.

A large portion of the mural that once decorated the entirety of a pedestrian tunnel near Marysville High School was painted over in pink last week after hate symbols and speech were found scribbled over artwork within the tunnel.

Last week, video footage posted on Facebook showed white supremacist hate symbols and words strewn across the walls of a mural inside a pedestrian tunnel near Marysville High School.

The symbols and hate speech found in the tunnel, located parallel to B Street near 17th Street, included the display of swastikas, the letters KKK (Ku Klux Klan) and derogatory terms against Black people.

As a result of the hateful text and images, a significant portion of the mural was painted over in pink, forever covering the hard work put in by artists from the community who sought to bring color and life to this long-maligned tunnel in Marysville.

In October 2018, Yuba Sutter Arts & Culture (YSAC) partnered with Marysville Joint Unified School District (MJUSD), Rodney Herrera of Elegant Arts Studio, and some of Herrera’s colleagues from Reno, Nev., to spray paint a mural inside the tunnel and refurbish an area that previously had been an eyesore for the community.

“They had a series of issues in the tunnel and wanted to do something about it,” said David Read, executive director of YSAC. “They thought, ‘Maybe if we put in a nice mural and put in nice music, it will deter issues.’”

Read said MJUSD had initially spent about $2,500 to get the mural completed. He said the mural was a passion project for Herrera and a way for Herrera to give back to the community. While Herrera was the main artist in charge of the mural, Marysville High School art students also helped spruce up the look of the tunnel, Read said.

“We’re incorporating peach trees, images of trains and train tracks, references to gold mining and other aspects of local history, and some reference to the high school and their mascot,” said Herrera in a 2018 Appeal story about the mural.

Jolie Critchfield, director of Student Supports & Innovations at Marysville Joint Unified School District, said on Monday that the initial work on renovating the tunnel began in late 2016 when lighting was put in for the safety of those who used the tunnel, including students at Marysville High School.

She said the improvements made over time were done as a community outreach project to help clean up the tunnel.

“We felt it wasn’t a safe place for our kids to travel through,” said Critchfield.

As time went on, other projects were done to make the tunnel more desirable for foot traffic.  Part of that effort was the funding of the mural and music that still can be heard today inside the tunnel.

Since the completion of the mural, students at MHS, including the high school’s Key Club, have helped keep the area clean. Critchfield said the district’s maintenance department also has aided in efforts to keep the tunnel visually appealing.

The Marysville Police Department was contacted and has been involved with the recent incident within the tunnel, said Read. He said cameras at the tunnel may have captured those who sought to deface the artwork.

“The Marysville Police Department is currently investigating this matter,” said MPD Chief Chris Sachs in an email on Monday. “We have assigned our school resource officer with this investigation along with our detectives. These officers are currently conducting follow-up and reviewing video footage. This investigation is active and on-going at this time.”

While police continue to investigate the matter, Critchfield said she was hopeful the community might come together to remedy the loss of so many hours that went into not only creating the mural, but getting the project itself started and maintaining it over time.

“It’s just so costly. We put so much into it prior to that,” said Critchfield.

Read said the mural previously had been the target of unwanted graffiti, but not something such as what was seen last week.

“In the past we’ve had fairly minor stuff, but this was the first time I’ve seen hate stuff,” said Read. “Of all the murals we’ve done, it’s the only one that’s been repeatedly attacked. The difference here is the hateful nature of the stuff.”

Although these kinds of public murals are often the targets of other graffiti, Read stressed how this latest example was concerning.

“Public art, it’s part of the deal unfortunately, but we’ve been very fortunate at YSAC to be exempt from this behavior,” said Read. “I’m very concerned about this latest round of graffiti. … especially with what happened with Wheatland Union High School.”

The hate speech displayed on the Marysville mural continues a recent disturbing trend in Yuba County regarding white supremacy.

In response, Wheatland Union High School District Superintendent Nicole Newman said the students photographed displaying hate symbols were disciplined and that she and district staff had received death threats as a result of the pictures circulating.

In the image that was widely viewed, nearly all of the Wheatland Union High School students in the photo could be seen with SS bolts or swastikas displayed on their skin. One student also could be seen displaying an “OK” symbol – a hand gesture that has recently been associated with white supremacist hate groups.

“We have been rocked to the core due to the disturbing images posted on social media by students who reside in our community,” Newman said in a video posted on Dec. 30 regarding the images. “These acts do not in any way reflect the values of our community or that of our school district. Although I’m legally precluded from sharing details regarding their disciplinary action, I can share with you that we took immediate action and will continue to do so in accordance with the facts and the legal parameters established by law.”

At the time, Newman said the district was going to work with stakeholders in the community to educate area youth about “diversity and inclusion and embracing different points of view.”

She also said dealing with the response to the hateful image and others that were circulated had “been one of the most traumatizing experiences in my life.” Newman said her family and her colleagues’ families had been subjected to death threats on a daily basis as a result.

Government’s role in our lives has …