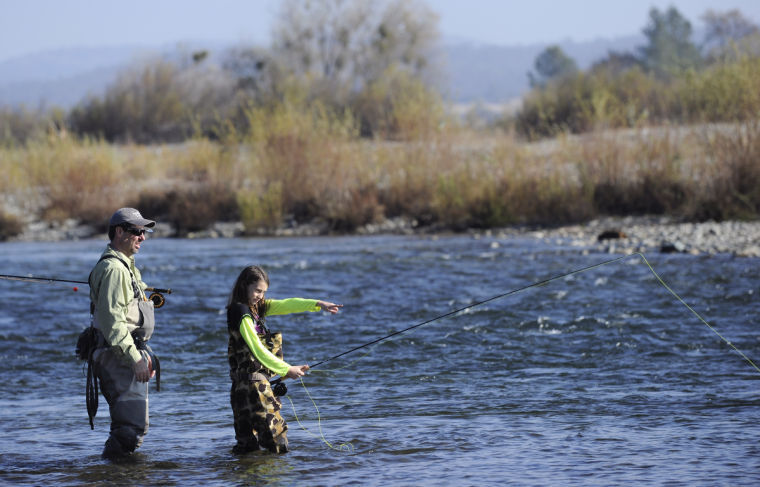 Barry Pearson, 47, and daughter Kendra Pearson, 10, of Auburn, fish for steelhead in the Yuba River near Hammon Grove Park east of Marysville on Sunday, Nov. 24, 2013. 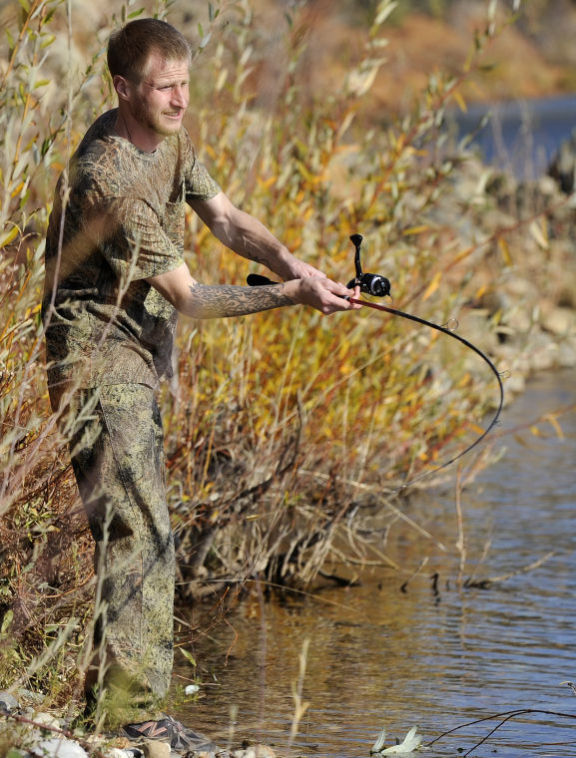 Rick Kamholz, 26, of Elk Grove, fishes along the bank of the Yuba River near Hammon Grove Park east of Marysville on Sunday, Nov. 24, 2013.

Barry Pearson, 47, and daughter Kendra Pearson, 10, of Auburn, fish for steelhead in the Yuba River near Hammon Grove Park east of Marysville on Sunday, Nov. 24, 2013.

Rick Kamholz, 26, of Elk Grove, fishes along the bank of the Yuba River near Hammon Grove Park east of Marysville on Sunday, Nov. 24, 2013.

When water is involved, there’s almost always a battle between competing interests.

That was the case along the Yuba River until 18 different parties reached an agreement a decade ago, which delineated what water benefits each would realize.

This past year was the 10th anniversary of the game-changing Yuba River Accord. After decades of court battles over how the different parties thought the river water should be used, the Accord – finalized on May 20, 2008 – brought parties to the table to find a meaningful and long-term solution.

The Accord has been hailed as a landmark achievement by many in the water world because it establishes improved conditions for fish like salmon and steelhead, reduces flood risk, protects water rights for farmers and ranchers, and provides a reliable water supply for cities and farms throughout the state. It’s about as comprehensive as a water agreement can get.

The agreement has received awards, such as the Governor’s Environmental and Economic Leadership Award in 2009, the Association of California Water Agencies’ 2008 Theodore Roosevelt Environmental Award, and the National Hydro Association’s 2009 Outstanding Stewards of America’s Waters Award. In a report about lessons learned from the recent drought, the Public Policy Institute of California highlighted the Accord as a success and a model for other freshwater ecosystems.

The following comments and information were provided by a few of the stakeholders involved in the Accord about its significance and a few of its most beneficial components.

Aikens said the Accord was a true game changer for the agency. By agreeing to provide increased flow requirements that improved habitat conditions for fish in the river, the agency received water reliability for its member units, continued water transfer revenue for flood protection and water supply missions, financial resources for relicensing through the Federal Energy Regulatory Commission, and enough to invest in new facilities and people to help take over power sales from PG&E in 2016.

“Without the Accord settlement, our focus would have been on defending our interests in court. While there is no way to know what that outcome of the legal challenge would have been, my experience says it would not be as good as the Accord,” Aikens said. “This is because a settlement can include agreements to address interests outside what can be achieved in the regulatory process. My 20 years of experience as general manager leads me to conclude that without the Accord, more time, money and our strategic focus would have been spent defending our interests in court, and the result would be less favorable than the Accord. The likely result would likely have been more deficiencies in water deliveries and less surface water transfer revenues with the potential for none at all.”

The agreement didn’t just benefit the agency, though. Aikens said it helped with a number of significant improvements made for the people of Yuba County.

It helped with more than $450 million in levee and flood protection improvements that are helping the urbanized areas in the south county and Marysville on their path to achieve 100-year FEMA levee certification and 200-year state required certification. The certifications end up saving homeowners and business owners money annually in lower flood insurance premiums.

Also, water reliability to its eight member units results in sustainable groundwater aquifers, which are the source of water for 80 percent of the county’s residents.

“Without the Yuba Accord I don’t believe that Yuba Water Agency would have made the above game-changing accomplishments and have such a bright future for a vibrant Yuba County,” he said.

On the environmental side of things, Booth said, the Accord was an unprecedented opportunity to improve conditions for fish in the lower Yuba River, where 150 years of mining and dam building decimated fish populations. It was a compromise, she said, founded on the idea that collaborative management of a river was possible.

“The Yuba River Accord created the opportunity to adaptively manage the river based on newly acquired information. Unfortunately, in the 10 years since the Accord, no modification to river flows occurred based on new information,” Booth said. “Fish populations in the lower Yuba River have continued to decline, exacerbated by drought conditions that will become more common due to climate change. This makes active and adaptive management of flows more important than ever before.”

Booth said SYRCL is committed to improving habitat conditions in the lower Yuba River and has successfully worked with landowners, agencies, nonprofits and consulting firms on restoration projects. The organization – with 35 years of experience in the watershed and 3,500 members and volunteers – has plans to restore 250 acres of riparian habitat on the river over the next five years.

“SYRCL’s bigger vision is to focus on creating a large-scale restoration and land conservation program in the lower Yuba River that will serve as an educational and recreational resource to the people who live in the Yuba River watershed,” she said. “We look forward to continuing to work collaboratively and will continue to stress the importance of using the data that is being collected to adaptively manage the river and make the lower Yuba a healthy ecosystem.”

Filice said the Accord is important because it provides a reliable water supply for both fish and farmers and in known quantities. He said it demonstrates how farms and fish are compatible, if given the chance to succeed.

“The Accord allowed farms to continue to thrive and show that farmers are not opposed to fishery improvements, as long as the science supports the decision,” he said. “The Accord quantifies the amount of water available for the upcoming irrigation season and sets a target storage level for the end of the irrigation season. Water certainty is essential for agricultural planning and crop production.”

Some of the participating agencies of the Accord possess water rights to the surface water and groundwater. The Accord, Filice said, allowed those water right holders to maximize their supplies, while also benefiting fish.

“It also allowed surface water right holders to show full use of their water rights to preserve those rights in the future,” he said.

In terms of groundwater substitution transfers, the Accord gives the agency and its member units the ability to participate because it is based on continual preservation of the groundwater resource, he said.

“Each district developed its own surface water diversion facilities and infrastructure, which contributed to curtailing pumping of large amounts of groundwater in each district. These actions eliminated groundwater overdraft conditions that were occurring in Yuba County,” he said.

The agreement is also uniquely set up to help when the Sustainable Groundwater Management Act goes into effect. Filice said Yuba County has one of the best-managed groundwater basins in the state.

“Yuba is currently in the process of developing a Groundwater Model for both the north and south sub-basins. When complete, Yuba will be able to use historical data and current data to develop and run different scenarios that will predetermine effects on groundwater,” Filice said.

Hastey said the Accord is a model for integrated water management in California, with state and federal agencies, conservation groups and water managers all interested in learning how it could be applied to other watersheds.

“The award-winning Yuba Accord is a unique agreement that allows Yuba Water Agency to sustainably manage water, in this world of weather extremes, in a way beneficial to the environment, the agricultural community, water users and the people of Yuba County,” he said. “It started a new era of collaborative, science-based water management and settled disputes originating in the late 1980s over how much water should be provided for the Yuba’s fisheries.”

The Accord improves fisheries, he said, because it established guidelines for the agency to release more water at the right times of the year for fish, providing colder temperatures that are optimal for fish at all stages of their life cycles. The flows range upward to more than 170,000 acre-feet of water in a wet year.

“Additionally, Yuba Water releases supplies beneficial for other areas, including the Bay-Delta, through the California Department of Water Resources,” he said. “Finally, Yuba Water committed to a $6 million fisheries monitoring, studies and enhancement program and continues to invest $550,000 per year into the ongoing science program.”

Another key aspect of the Accord is its Water Purchase Agreement with California’s Department of Water Resources. Some of the flows released for fish are then available to be sold to farms, ranches and communities beyond the Delta, he said. The transfers have provided the agency a stable revenue source to invest in the community – like the local cost-share of the nearly 6-mile-long Feather River Setback Levee; repaying the bond funds; and providing grants and lines of credit for other local projects that align with the agency’s objectives.

Overall, he said, the Accord helped establish relationships that will prove to be important moving forward as the groups work together to solve the state’s water challenges.

“Right now, the State Water Resources Control Board is considering controversial changes to water rights in an effort to improve the environment in the Bay-Delta,” Hastey said. “The Accord is being used as a model, highlighting a different way we can try to work through the issues, putting science before emotions, and collaborating to find that sweet spot where everyone wins.”