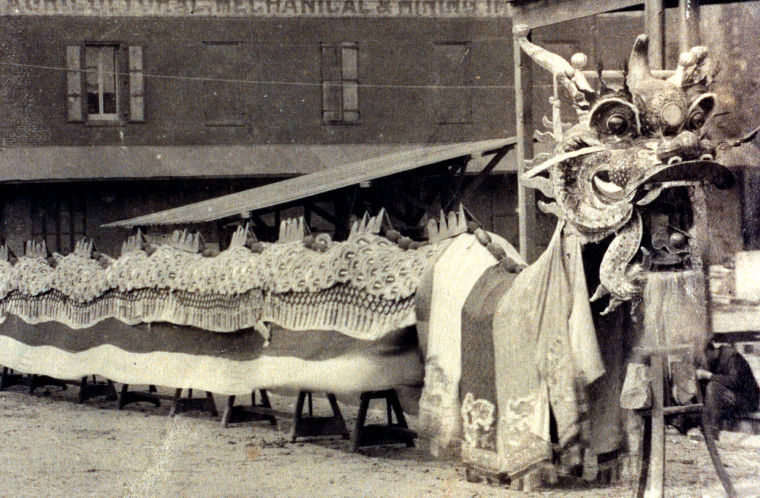 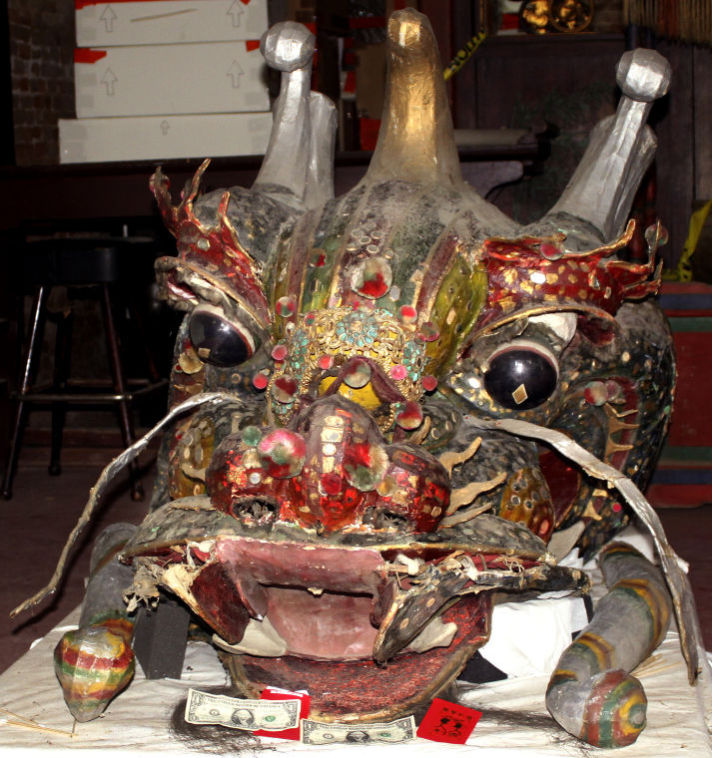 Moo Lung, a dragon that first came to Marysville in the 1880s, could soon be on its way to an exhibition at the New-York Historical Society in New York City after first having some restoration work done.

Moo Lung, a dragon that first came to Marysville in the 1880s, could soon be on its way to an exhibition at the New-York Historical Society in New York City after first having some restoration work done.

Moo Lung is showing its age.

The nearly 130-year-old dragon, which has been in storage at the Bok Kai Temple since the 1930s, is receiving a rebirth of sorts and might soon be restored.

It's said it took a 100-person team to operate the dragon and all of its other parts.

Moo Lung, also knows as Gum Lung and Lung Huang, is believed to be the first Chinese ceremonial dragon to come to the United States.

The intricate, detailed dragonhead is made up of paper mache, silk, hand blown glass and kingfisher feathers.

The dragon, which was used at Bok Kai festivals until 1916, made one final Marysville appearance in 1930.

Moo Lung was included in a San Francisco parade in 1937, but at only 100 feet in length due to tearing and old age.

Moo Lung made many appearances in parades and celebrations in places including Los Angeles, San Francisco and Seattle.

Moo Lung traveled to the 1893 Chicago World's Fair and a Fourth of July parade in New York City in 1911.

It was that appearance in New York that caught the interest of Marci Reaven, vice president for history exhibitions at the New-York Historical Society.

She has been told of the dragon by David Lei, a cultural adviser for the Chinese New Year Parade in San Francisco who was familiar with Moo Lung.

Reaven is in the process of collecting Chinese-American objects for an upcoming exhibition titled "Chinese American: Exclusion/Inclusion," set to open in September in New York City.

"It is a majestic object," Reaven said of the dragonhead, which she hopes to include in the exhibition.

The Marysville Chinese Community, which owns the dragon, is set to vote in the coming days to see if the dragonhead should be restored and loaned to the New-York Historical Society.

A simple majority is all that is needed.

Reaven said that the historical society would be facilitating the restoration.

The dragon is expected to be moved to the San Francisco area in the coming weeks for the potential work.

"The work will be mostly cleaning and repairing the structure," Reaven said.

Lei agreed and said the jaw and tongue also need to be redone.

More than a dozen bells are tied under Moo Lung's head, which would make noise as the dragon was maneuvered down the street.

"I think those bells inside are neat," said Ric Lim, president of the Marysville Chinese Community, before packaging up the dragonhead for the anticipated transport.

If a final contract is signed, Moo Lung would be on display at the New-York Historical Society through the end of May 2015.

Lim said he would love to be able to display Moo Lung locally following the exhibition, but said that topic still needs to be discussed.

Lei is impressed that the Marysville Chinese community from the 1880s was committed enough to import a dragon.

"You can't wake up one day and do this yourself," Lei said. "It takes organization, and Marysville had it."