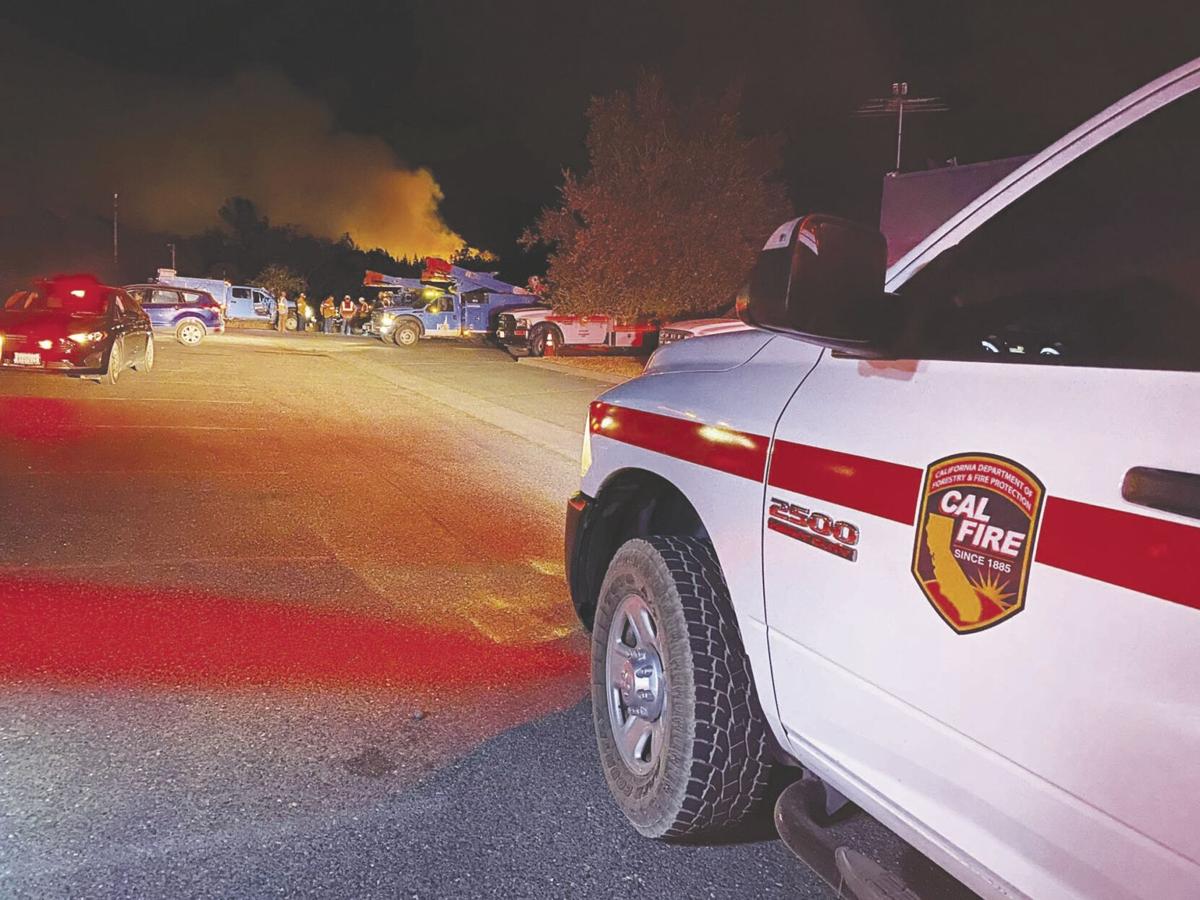 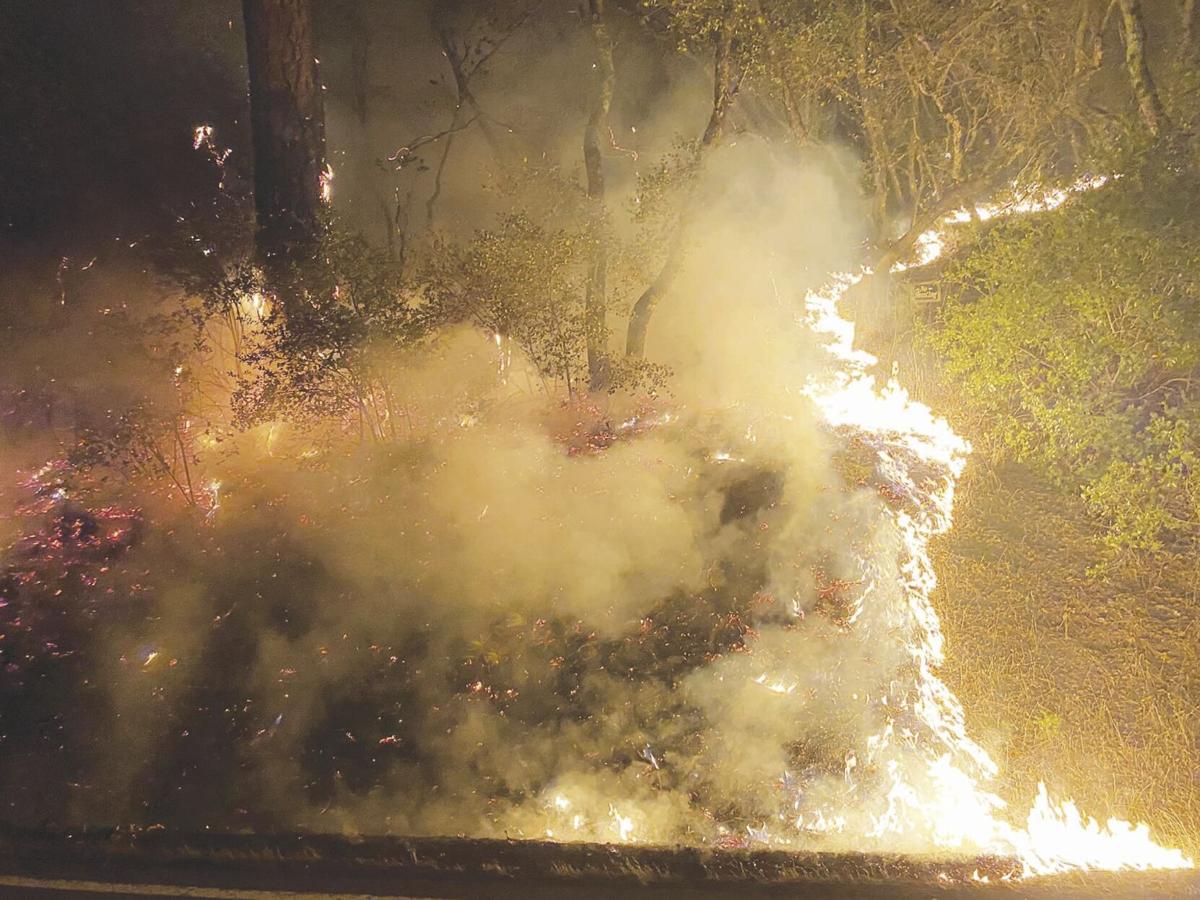 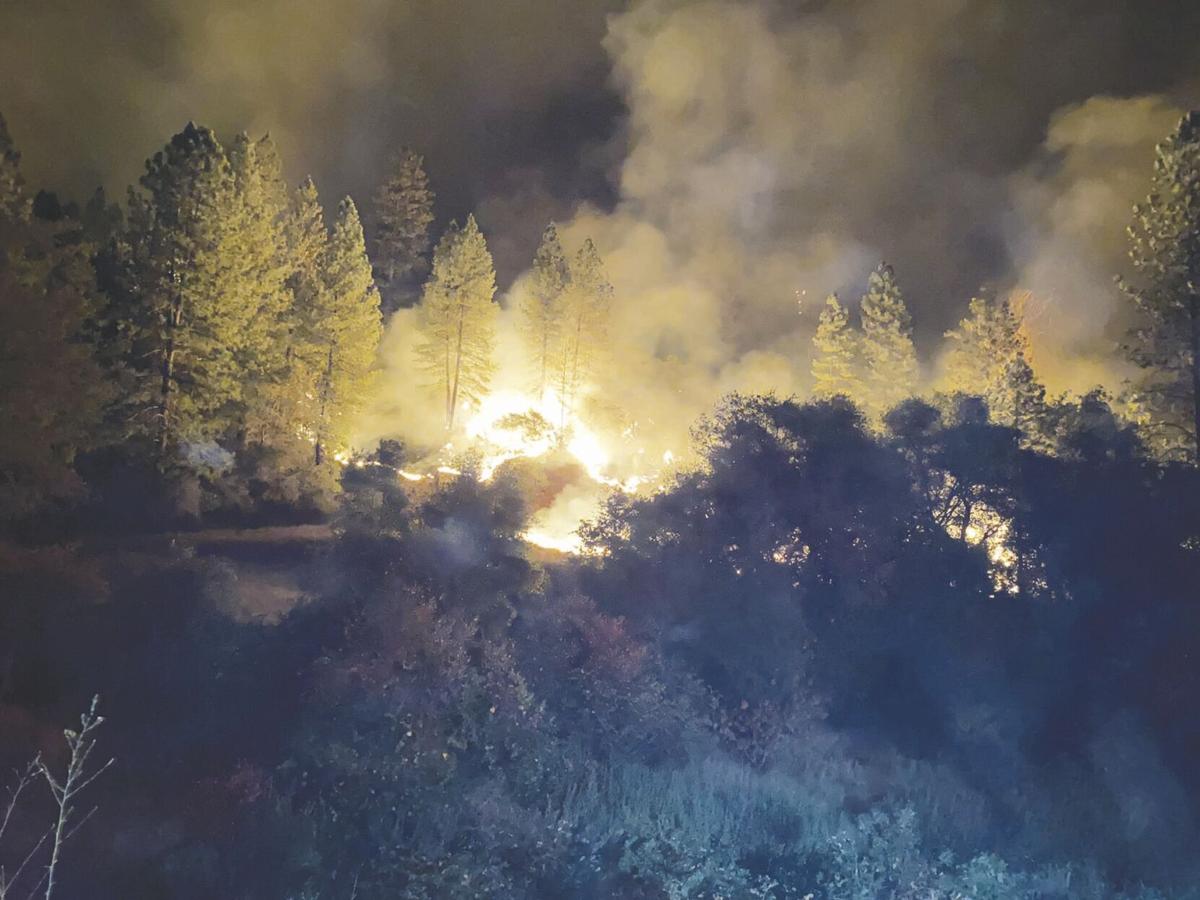 When Cal Fire crews first responded to the wildfire, which broke out around 4 a.m. Wednesday, it  was at about 300 acres. By 9 a.m., the fire had grown to 1,000 acres, though air resources had begun attacking it. As of late Wednesday afternoon, the fire was mapped at 1,311 acres with zero containment, with 700 homes threatened and 14 residences and 16 outbuildings destroyed, according to Mary Eldridge, public information officer for the Cal Fire Nevada-Yuba-Placer Unit.

But an early evening update was issued by the Yuba County Sheriff’s Office and CalFire, lifting mandatory evacuations for Loma Rica. According to the news release from Yuba County, officials felt confident in containment of the fire as of late afternoon.

They emphasized that all other evacuation orders remained in effect.

Fire activity, it was reported, mostly occurred on the northern edge of Loma Rica. Yuba County staff will be in the area today (Thursday) assessing impacts from the fire and to help homeowners.

“The BearFire/NorthComplex is still a very active fire, and evacuations and road closures along Yuba County’s northern border with Butte and Plumas counties (including Forbestown, Strawberry Valley, Clipper Mills, Brownsville-Challenge, Rackerby, Woodleaf), remain in effect, according to the news release.

Thousands of Loma Rica residents were evacuated early Wednesday morning due to the Willow Fire, which started around Marysville Road and Willow Glen Road in Dobbins.

The areas hit hardest by the fire, as of 3 p.m. on Wednesday, were around Begonia Way at Willow Glen Road, as well as both sides of Willow Glen Road – which is just north of Collins Lake.

The location where the fire started is in the same area where the Cascade Fire in 2017 began, which resulted in the death of four residents, burned a total of nearly 10,000 acres and destroyed 264 structures. That fire, which started on Oct. 8, 2017, and took four months to get fully contained, was started by sagging power lines coming into contact during heavy winds.

Locations evacuated for the Willow Fire included the area where Marysville Road becomes Willow Glen Road, and all areas south from Collins Lake to the Yuba County border to the West, with Fruitland Road representing the lower line of the evacuation. Voluntary evacuations were also called for the Oregon House/Dobbins region north of Marysville Road between Frenchtown Road to the West, Indiana Ranch Road to the East, and Forsythe Road to the North.

Additionally, a fire burning further north – part of the North Complex Fires – prompted the evacuation of several Yuba County towns on Tuesday afternoon. Communities impacted included Forbestown, Woodleaf, Clipper Mills, Strawberry Valley, Rackerby, and Brownsville-Challenge. The U.S. Forest Service had estimated that 254,000 acres had burned in the North Complex Fires (38 percent contained) as of Wednesday afternoon – an increase of more than 200,000 acres from the day before.

“At this time, we are advising anyone on the outskirts of these areas to continually monitor the situation and stay plugged in for updates and be prepared to evacuate should it come to that,” said Yuba County Sheriff’s spokesperson Leslie Carbah.

County officials estimated that around 2,000 residents in Loma Rica had been evacuated, while another approximately 3,000 Yuba County residents were evacuated due to the North Complex Fires. Carbah said her department was not aware of any reported injuries due to the fires in the county.

The Yuba-Sutter Fairgrounds in Yuba City is taking in evacuees from the fire and providing a place to park and rest in three different areas around the grounds – a lot at Franklin Avenue and Wilber Avenue; at the C Street lot; and along Garden Highway across from the fairgrounds. It has security, restrooms and a service to care for evacuees’ pets and quarters for livestock.

Fairgrounds CEO Dave Dillabo said the facility will also be serving as a Cal Fire base camp temporarily while crews are in the region fighting fires. He started working to get the fairgrounds ready for evacuees around 1:30 a.m. and worked throughout the day. He credited the various community members, volunteers and board staff members who stepped up to help with logistics and operations.

“The fairgrounds are here to serve the community in a variety of ways, so that’s what we are trying to do,” Dillabo said.

As of Wednesday afternoon, Dillabo estimated that a couple hundred people had come to the fairgrounds for aid or a place to park.

The American Red Cross established a post at the fairgrounds to assist evacuees. Both Yuba and Sutter counties were helping manage the evacuation center. Yuba-Sutter Domestic Animal Disaster Assistance opened a shelter for dogs at the fairgrounds inside the Expo Hall – those interested in volunteering should contact 674-5754.

In addition to the Yuba-Sutter Fairgrounds accepting livestock, the Yuba County Mounted Sheriff’s Posse arena in Browns Valley – located on Marysville Road about a quarter mile north of Highway 20 – began sheltering evacuated large animals on Tuesday. The arena will be staffed by posse members every day from 8 a.m. to 6 p.m. for drop off or pick up, according to the group’s Facebook page. The Sutter County Sheriff’s Posse was also accepting evacuated animals.

“We understand there is a great desire to donate to evacuees,” she said. “We appreciate the kind hearts of our community but with COVID-19 still a real threat, we cannot accept donations at this moment other than pet needs (like leashes, litter, pet food, etc.). Those can be dropped off at Habitat for Humanity (202 D Street, Marysville). Go to the south end of the building where the blue fence is and there are bins for dog supplies and cat supplies on pallets ready to go.”

Fiscal donations like gift cards are also being accepted.

“Please heed evacuation orders and amidst fire season, all residents should have a go-bag packed just in case,” Rosenbaum said. “You can find information on what to include in a go-bag also at BePreparedYuba.org.”

Shasta Alexander and her family didn’t mess around when it came time to evacuate.

“We got out the day before they started evacuating (Brownsville),” Alexander said.

“My mom, she was born and raised up there, she knows that when they say ‘fire’ you have to be ready; so when they started evacuating Strawberry Valley and La Porte, my mom looked at all of us and was like ‘guys, go get your stuff together, we’re going now.’”

Many evacuees made it to the Yuba-Sutter Fairgrounds on Wednesday following evacuations in the Yuba County foothills.

Alexander, 30, along with her mother, father, brother, sister-in-law, nephew, cousin and niece left Brownsville due to the fires.

She said soon after they left, they heard that Brownsville was being evacuated.

The family is staying in a hotel but was at the evacuation center at the Yuba-Sutter Fairgrounds because that’s where the Red Cross was helping evacuees.

“It’s just scary, I’ve never been through this,” Alexander said. “We moved to Illinois and I dealt with flooding all my life, I didn’t deal with fires … I just hope everybody gets out OK.”

The local University of California Cooperative Extension has resources available to help Yuba-Sutter residents prepare for and recover from fire (http://cesutter.ucanr.edu/LivingWithFire/). For those with livestock, the Natural Resources Advisor, Dan Macon, has specific resources for ranchers: https://ucanr.edu/sites/Livestock/Wildfire/.