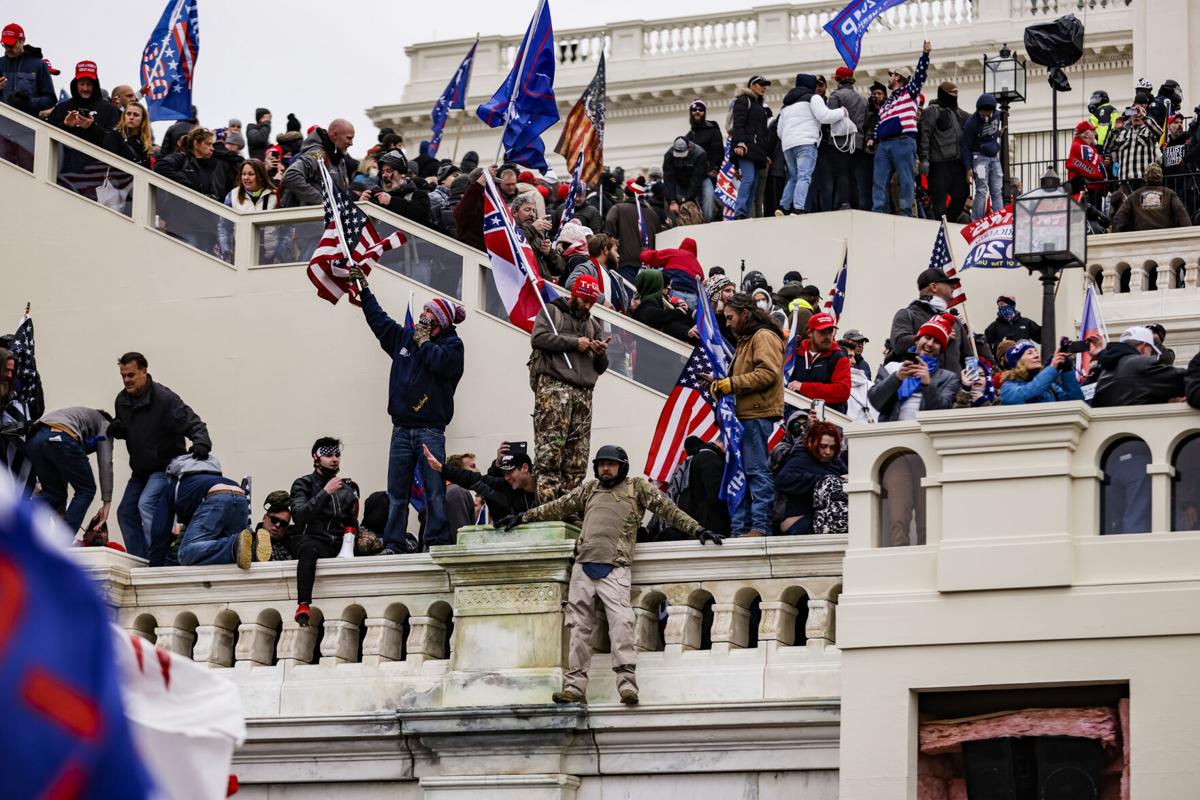 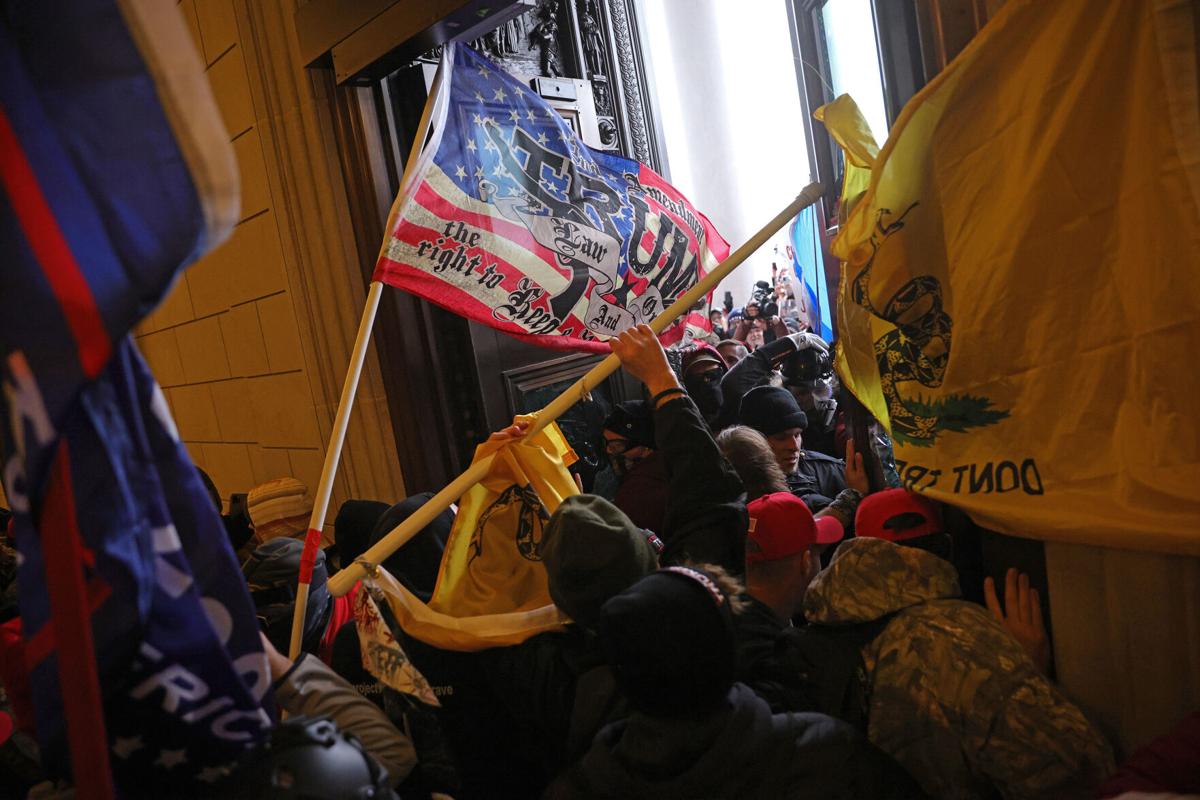 Supporters of U.S. President Donald Trump break into the U.S. Capitol on Wednesday in Washington, D.C.

Supporters of U.S. President Donald Trump break into the U.S. Capitol on Wednesday in Washington, D.C.

WASHINGTON – Supporters of President Trump stormed the U.S. Capitol Wednesday, pounding on the door of the House chamber as lawmakers huddled inside and strolling across the Senate floor carrying signs to object to the election of Joe Biden, an extraordinary security breach spurred by President Donald Trump’s encouragement and claims of polling fraud.

The invasion forced the House and Senate to abruptly stop their debate over the formal counting and announcement of electoral votes for Biden, a constitutionally mandated process.

In the Senate, the body’s president pro-tempore, Republican Sen. Charles Grassley of Iowa, interrupted a senator midsentence to declare the chamber in recess as Capitol Police ordered a lockdown of the building.

The breach came after thousands of extremists broke through security barricades, overwhelming a seemingly unprepared Capitol police force, unleashing scenes of violence inside a pillar of America’s democratic system and interrupting the usually peaceful transition of power.

At about 2 p.m. Eastern time, the mob broke the glass door of the chamber of the House floor, prompting Capitol police officers inside to draw their guns. Members of Congress and Capitol Police barricaded the door with a large bookcase.

Reporters present heard at least a single gunshot. Some House members, who had been trying to debate the Electoral College votes inside, were evacuated before the mob breached the building. But at least two dozen members were left inside a gallery, given gas masks and advised to remain low to the floor.

Police deployed tear gas in the Capitol against a backdrop of statues honoring the country’s founders. Television pictures showed a woman being taken from the scene on a stretcher, covered with blood.

“It was a pretty terrifying experience,” said Rep. Jimmy Gomez, D-Calif., who was in the chamber. “This shouldn’t happen in the United States, where people think a democracy is being stolen from them and being antagonized by the president of the United States. It creates a dangerous situation where people are running for their safety.”

Trump released a video to his supporters, saying, “We love you, you’re very special.” He repeated his claim the election was “stolen” and told the rioters “you have to go home now, we have to have peace.” He was encouraged by fellow Republicans to get the rioters out of the Capitol.

About two hours after the incident started, as police began regaining control of some parts of the Capitol complex, Vice President Mike Pence issued a statement calling on the people to disperse.

“The violence and destruction taking place at the US Capitol Must Stop and it Must Stop Now. Anyone involved must respect Law Enforcement officers and immediately leave the building,” he said.

The Virginia and Maryland National Guard were called to the Capitol to help restore order. Although protests are somewhat common, they typically take place well outside the Capitol building. The breach was unprecedented in recent history.

“We’ve all seen the videos of banana republics all over the world, where the legislators fight, and they can’t keep security. And now the entire world is watching us,” said Rep. Jaime Herrera Beutler, R-Wash. “I am heartbroken for my country.”

The protests and violence occurred as a minority of Republicans objected to Congress’ counting of the Electoral College votes, a formality required by the Constitution. It is typically a perfunctory process.

Republicans in both the House and Senate planned to object to the certified electoral vote tallies in at least three states, using the process to express their loyalty to Trump, who urged them to support his claims of voter fraud in the 2020 election.

Before the protests, Wednesday’s Electoral College challenge laid bare the internal divisions within the GOP. Though some high-profile conservatives lined up to support Trump, others in the GOP were opposed to the last-ditch effort.

Although seen as one of Trump’s most loyal allies, the vice president is responsible for overseeing the process on Capitol Hill as president of the Senate. Trump falsely said Tuesday that Pence could singlehandedly “reject” the victory, but Pence and others have noted he has no power to change the outcome.

On Twitter, Trump called his followers to come to Washington for the proceedings. Many of them did, filling a plaza near the White House on Tuesday evening.

As the Trump supporters gathered, the congressional process of considering the Electoral College returns began at 1 p.m. Eastern with a joint session of Congress to go through each state in alphabetical order. Republicans planned to object to the results in at least three states: Arizona, Georgia and Pennsylvania. The first expected objection, Arizona, came within minutes of the start of vote counting.

The House and Senate separated into their respective chambers for up to two hours of debate on the Arizona objection. A vote on whether to uphold it – which was expected to fail – hadn’t yet taken place when the proceedings were halted. The process was expected to last well into Wednesday evening, if not Thursday morning, particularly if Republicans objected to more than the three states.

Democrats universally reject the GOP claims and have expressed concern that the objections will have long-term consequences.

“These actions have eroded the American people’s faith in the integrity of our elections and the institutions that stand at the core of our democracy,” said Sen. Chris Coons, D-Del.

Republicans who object to the vote say they’re following through on the objections and concerns of their constituents. Rep. Doug LaMalfa, R-Calif., said he would have preferred courts to review claims of fraud.

“Because the courts at all levels have sidestepped their duty to the republic, there is no other alternative than to use the power of Congress to investigate and hopefully get to the truth,” LaMalfa said.