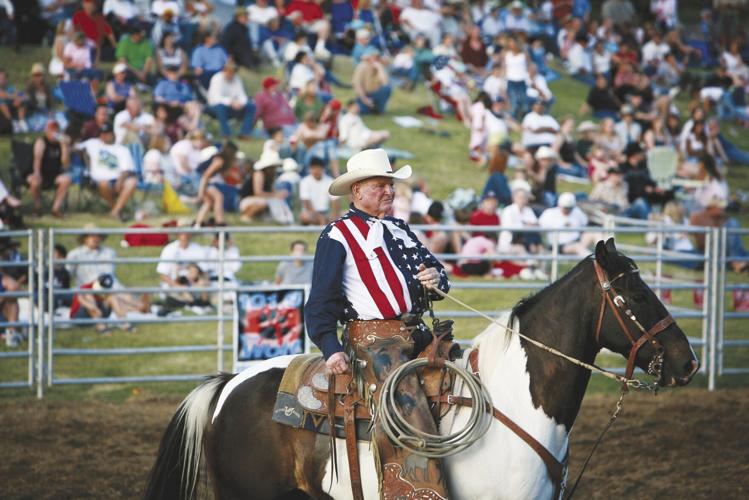 In 2021, the city of Marysville proclaimed Aug. 5 as Cotton Rosser Day. 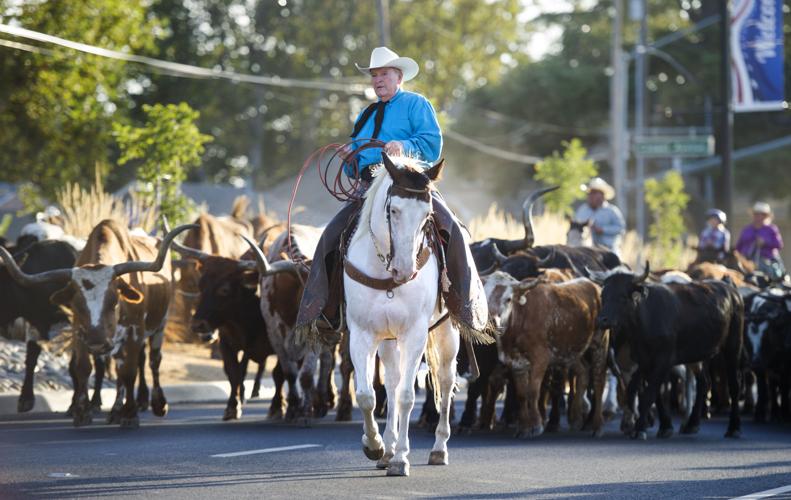 Cotton Rosser leads the Twin Cities Cattle Drive as part of the Marysville Stampede on Sept. 14, 2017, in Yuba City. 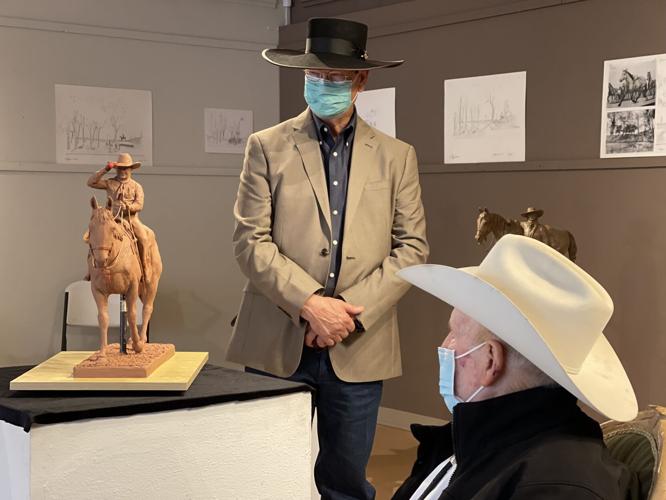 Artist Jeff Wolf, left, stands next to the model of the planned bronze statue of Cotton Rosser, who looks on, during an event on Oct. 23, 2021, at the Gallery at Yuba Sutter Arts & Culture in Marysville. 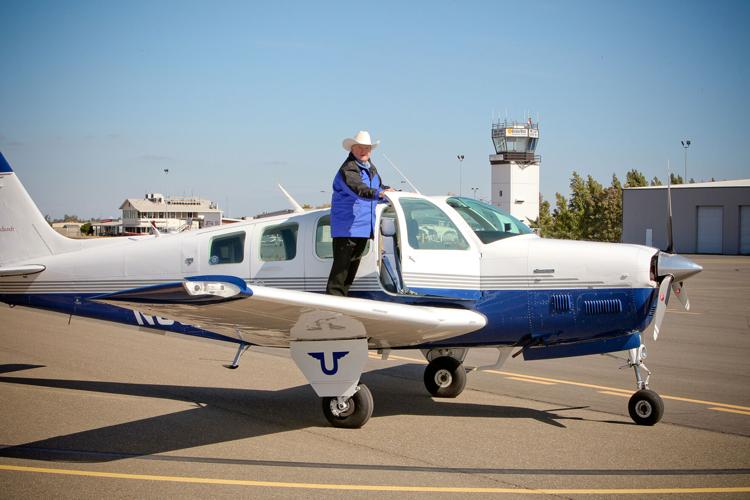 According to Vanessa Helder, rodeo legend Cotton Rosser started flying planes when he was on the rodeo team at Cal Poly University-San Luis Obispo. 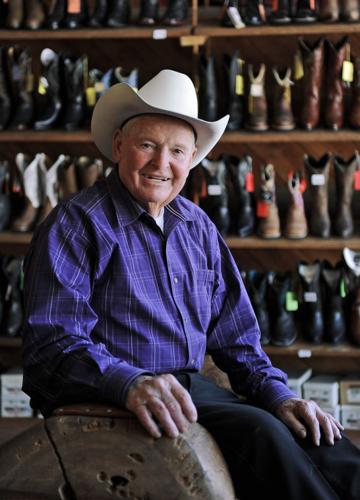 Cotton Rosser is photographed at Cotton's Cowboy Corral on April 28, 2014, in Marysville.

In 2021, the city of Marysville proclaimed Aug. 5 as Cotton Rosser Day.

Cotton Rosser leads the Twin Cities Cattle Drive as part of the Marysville Stampede on Sept. 14, 2017, in Yuba City.

Artist Jeff Wolf, left, stands next to the model of the planned bronze statue of Cotton Rosser, who looks on, during an event on Oct. 23, 2021, at the Gallery at Yuba Sutter Arts & Culture in Marysville.

According to Vanessa Helder, rodeo legend Cotton Rosser started flying planes when he was on the rodeo team at Cal Poly University-San Luis Obispo.

Cotton Rosser is photographed at Cotton's Cowboy Corral on April 28, 2014, in Marysville.

Cotton Rosser, considered a legendary hometown hero for Marysville and the Yuba-Sutter area, died Wednesday at the age of 93 at The Fountains nursing facility in Yuba City, his family confirmed with the Appeal.

Rosser, who was inducted into the ProRodeo Hall of Fame in 1995, is well known in the rodeo world due to his impact on the sport.

“For decades Cotton Rosser has been a legend in the sport of rodeo,” the post said. “His name is synonymous with the great family entertainment of the Flying U, but beyond the well known exterior was a man that loved his animals, his family and entertaining generations of families and creating memories that will last them a lifetime. Cotton peacefully tipped his hat for the last time this morning, June 22, 2022. His legacy will live on through his wife Karin, children, grandchildren, and great grandchildren. Long live the King of the Cowboys, Cotton Rosser.”

Rosser has been connected with rodeos for much of his life.

After riding donkeys during his childhood, Rosser previously said he began riding bulls at age 13 and advanced to saddle broncs at age 16. After competing in rodeo events as a teenager, he went on to become a member of his college rodeo team at Cal Poly University-San Luis Obispo, the Appeal previously reported.

“Rodeo is the only thing I know,” Rosser said in an interview with the Appeal in 2019.

As a professional, Rosser won multiple buckles, saddles and trophies throughout his career. Along with his induction into the ProRodeo Hall of Fame in 1995, Rosser was named PRCA Stock Contractor of the Year in 1985, according to the Professional Rodeo Cowboys Association.

In 1955, Rosser bought Flying U Rodeo. Prior to his death, he ran the operation with his son, Reno, producing about 50 rodeos a year. He also was the owner of Cotton’s Cowboy Corral, a western store in Marysville.

Rosser previously said he spent his entire life engaged in rodeo and met his wife Karin at the Ogden Pioneer Days in Utah more than 40 years ago.

“All five of his children are also involved in rodeo,” Karin Rosser previously said. “They all help out to put on the rodeo year after year.”

Even into his 90s, Cotton Rosser was still on the saddle.

“It’s the love of the sport that keeps him going,” Karin Rosser previously said. “And he has always been interested in educating people about the Western way of life.”

On Wednesday, many of those who knew Cotton Rosser expressed their appreciation for the work he did and the life he led.

“Cotton Rosser arrived in town during our modernist period,” Marysville City Councilman Stuart Gilchrist said. “His contribution continued even after the others had come and gone. His legacy will live on in several mediums including a bronze sculpture adjacent to his favorite Silver Dollar Saloon, a strong family unit of which I had the absolute pleasure of working with decades ago, which will continue his legacy as an entertainment force unparalleled in any other region.”

Gilchrist created several renderings of a statue of Rosser that is expected to be placed in Plaza Park on First Street in Marysville.

“Cotton arrived into town using the old D Street Bridge. He may leave using the E. Either way his bronze sculpture will be placed in between both at our Plaza Park, where he can watch over his beloved ‘stampede’ as it heads down D to First to the Cotton Rosser Arena,” Gilchrist said. “During the stampede his daughter-in-law Nicole Delerio Rosser’s Sodbusters, a major fundraiser for Flying U Rodeo, the entity Cotton created, continues to be the event of the season. His retail division is one of the last of its kind. He was short in stature, broken into tiny, well-healed pieces but was larger than life in his quest to bring a smile to your face. He will be missed deeply and my condolences go out to his entire family.”

David Read, executive director of Yuba Sutter Arts & Culture, said the nonprofit has been involved with the Rosser bronze statue project for the past year and has acted as fiscal sponsor.

“To date, the committee has raised nearly $100,000 of the project’s $250,000 budget. We are anxiously awaiting word from Kubota Corporation about our $100,000 grant application under their Hometown Proud program for parks improvement,” Read said. “A subcategory of the grant is celebrating rodeo culture. Noted western sculptor and former professional bull rider Jeff Wolf was chosen for the project. A bronze model of the statue is on display at Cotton’s Cowboy Corral western wear store in Marysville. The project designer is Stuart Gilchrist. Donations for the project can be made to Rosser Project - Yuba Sutter Arts & Culture.”

Read said Wednesday he was thankful to have met Rosser before he passed.

“I had the great pleasure of meeting with Mr. Rosser on several occasions this past year to discuss the project,” Read said. “The artist Jeff Wolf and I spent an afternoon at the Flying U Ranch going over details of the sculpture. Jeff and Cotton connected on many levels as Jeff’s first and last professional bull rides were on Cotton’s livestock. Jeff really wanted to capture in bronze every detail of Cotton’s tack and apparel. The Yuba Sutter Arts & Culture staff and Board of Directors send their condolences to the Rosser family.”

Wolf spoke about Rosser during a Meet the Artist event put on by Yuba Sutter Arts & Culture in October that featured the unveiling of the planned bronze statue.

“Cotton is an icon,” Wolf said at the time. “There isn’t anybody in the rodeo industry or any other western sport that doesn’t know the name of Cotton Rosser. So in that respect, it’s a tremendous honor to do something like this and as a young kid, I’d live 16 miles north on a ranch from Nephi, Utah. Cotton’s been putting that rodeo on for probably 60 years, and as a kid I would go watch the stampede every year. I didn’t know Cotton Rosser, but I knew the Flying U. So when I was little, I’d draw all these pictures of bucking horses and cowboys, and they all had the Flying U brand on them.”

Vanessa Helder, with The Helders Photography in Marysville, said she has worked with Rosser and the family for about 30 years.

“I’ve had the honor of photographing Cotton being inducted into the ProRodeo Hall of Fame in Colorado, Livestock Man of the Year, the National Rodeo Hall of Fame in Oklahoma, and when he was honored as the Legend of ProRodeo in Las Vegas, along with many more,” Helder said on Wednesday. “I’ve always known Cotton was an incredible man, knowing him all these years, but as I travel with him, and meet those around him, I realize the magnitude of him and his influence in the world of rodeo. He’s been an amazing man to capture his accomplishments, a true friend, and he’ll be truly missed. He leaves a legacy that the world will never forget.”

“Today, Yuba County lost a local hero and rodeo lost a legend,” Bradford said. “My thoughts and prayers go out to Cotton’s family and friends.”

Yuba County District 2 Supervisor Don Blaser, whose district includes Marysville, had fond memories of the times he spent around Rosser.

“He was such an icon in the community and a community leader,” Blaser said. “He did a lot for the community and was universally loved. I would see him in The Brick every once in a while and he was quite a character. He had a lot of confidence in himself, but had a soft side too. He was a pleasure.”

“Cotton Rosser was living proof that you can get there from here. He grew up in Long Beach but found a home here after purchasing Flying U Rodeo,” Smith said. “For more than half a century he has provided outstanding service to rodeo fans in arenas around the United States. He really was a great man with a great passion for cowboying who made a name for himself and for Marysville providing quintessential American entertainment. Even if rodeo is not your thing, you have to appreciate his achievements.”

“Cotton was a rodeo icon nationwide and is in the ProRodeo Hall of Fame in multiple categories,” Harlan said. “But locally, he was a warm and caring man who knew no strangers. His spirit will live on in the hearts of thousands of residents.”

“The sport of rodeo lost a legend today with the passing of Cotton Rosser,” the National Finals Rodeo said. “He was once a great rodeo competitor and then turned his attention to producing stock under the banner of the Flying U Rodeo Ranch. He went on to produce more than 50 rodeos a year and many of his stock could be found in Las Vegas for the Wrangler NFR each year. He was inducted into the ProRodeo Hall of Fame in 1995. Our thoughts and prayers are with the Rosser family at this time.”

School would be better if?