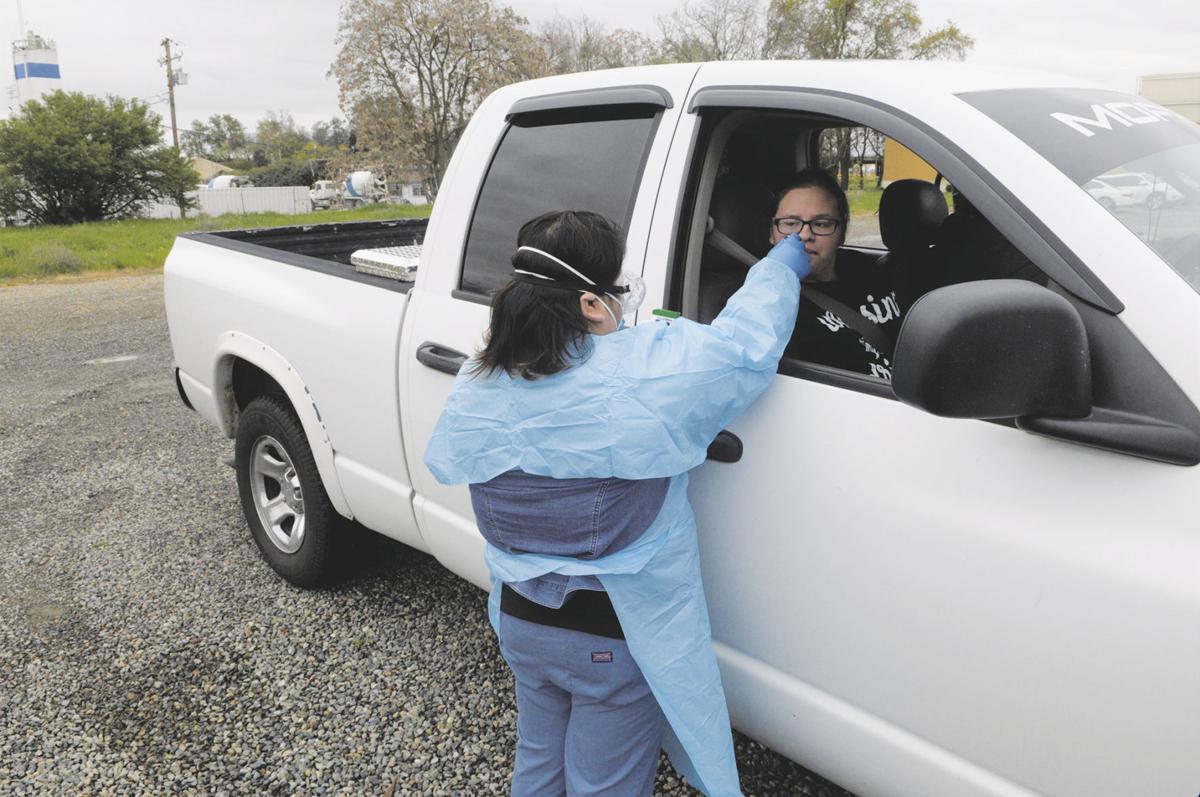 An Ampla Health employee takes the temperature of a Yuba-Sutter resident as part of the coronavirus screening process. It’s one of three screening and testing locations throughout the Yuba-Sutter area. 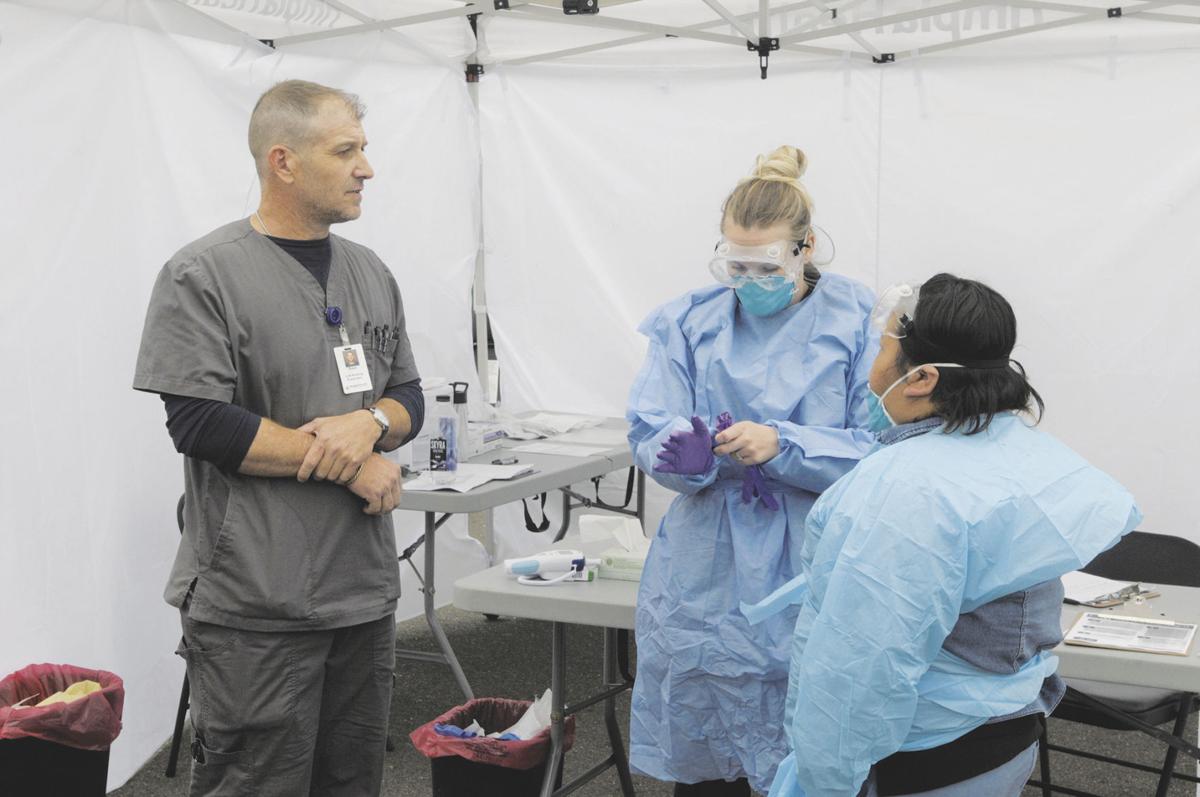 Ampla Health employees prepare to administer a screening at the organization’s site behind the health offices along Sutter Street in Yuba City on Wednesday. 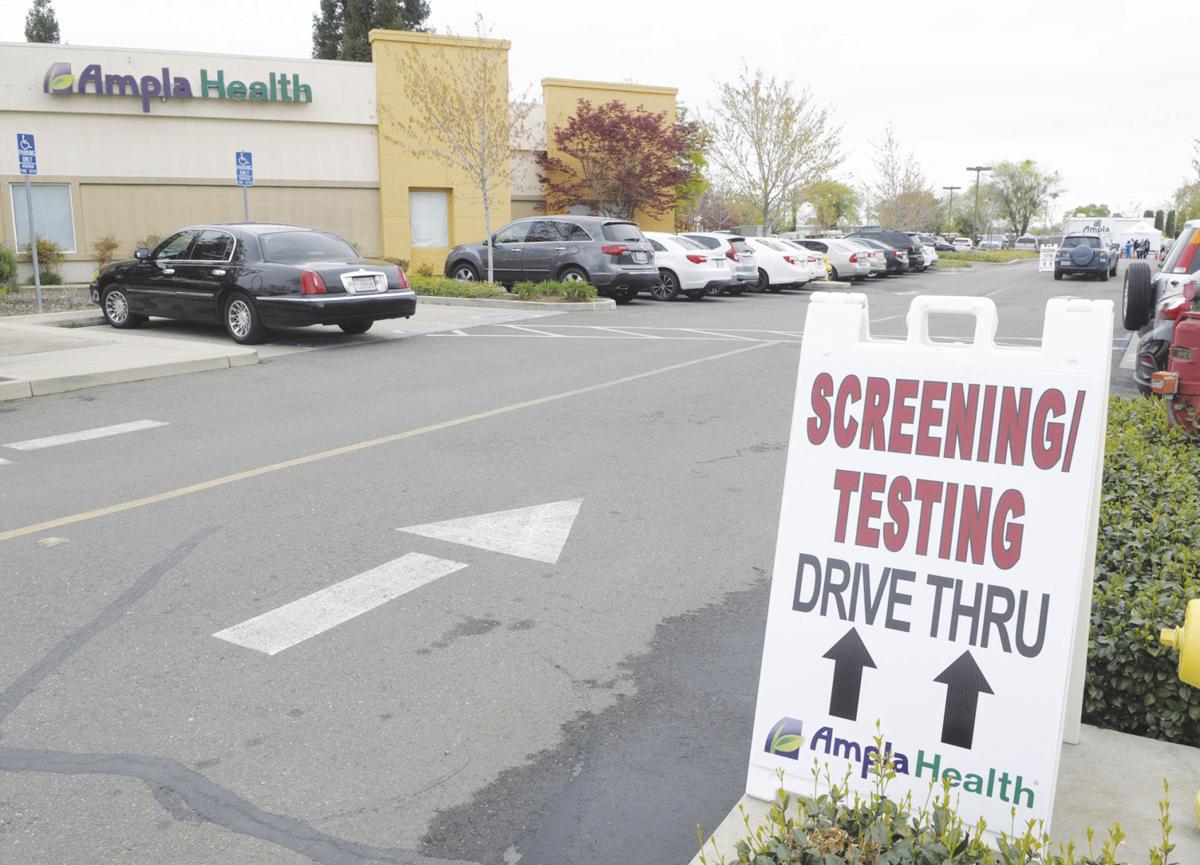 Ampla Health opened a screening and testing drive-thru location earlier this week behind the organization’s health offices located along Sutter Street in Yuba City. Other organizations that have opened similar sites include Adventist Health/Rideout and Peach Tree Health.

An Ampla Health employee takes the temperature of a Yuba-Sutter resident as part of the coronavirus screening process. It’s one of three screening and testing locations throughout the Yuba-Sutter area.

Ampla Health employees prepare to administer a screening at the organization’s site behind the health offices along Sutter Street in Yuba City on Wednesday.

Ampla Health opened a screening and testing drive-thru location earlier this week behind the organization’s health offices located along Sutter Street in Yuba City. Other organizations that have opened similar sites include Adventist Health/Rideout and Peach Tree Health.

The public health situation continues to change by the day, presenting a moving target for health care professionals working to address the issue and prevent further spread of the coronavirus, or COVID-19.

One of the main problems many have faced is that there aren’t enough testing kits to go around, so rural counties like the Yuba-Sutter area that haven’t had any confirmed cases have turned to other methods to meet the demand.

One way health professionals have been dealing with the lack of testing kits is by relying more on screening of patients before making a decision to test. Earlier this week, health care providers in the area opened up three locations where residents can get screened and, if found to meet certain criteria, tested for the virus.

“We were hopeful that when community testing sites became available one week ago that testing of COVID-19 would be more widespread. This has, unfortunately, not been the case,” said Bi-County Public Health Officer Dr. Phuong Luu. “Testing kits is now an issue of demand of limited supply. Screening for testing has been vital since day one, as we want to preserve our healthcare system for the most vulnerable and high-risk patients.”

Monica Arrowsmith, public information officer for Adventist Health/Rideout, said the testing sites are in daily communication with Luu. She said those wanting to be tested at the hospital’s satellite location in Yuba City must first speak with their primary physician for a screening.

Screening basically requires patients to answer a series of questions posed by a health care professional. Some of the questions they are asked include whether or not they have been experiencing any symptoms related to the coronavirus – coughing, shortness of breath, fever – as well as if they’ve travelled anywhere out of the country recently. If the patient meets certain criteria, the doctor sends over an order to the testing site to make an appointment for testing.

“When they arrive, they are asked to remain in the car. When they get here, we ask them to call and say they are in the parking lot, where staff will then go to them and take a swab,” Arrowsmith said.

Swabs are taken of both the nasal passage and in the back of the mouth. More and more testing sites are turning to swabs since there is a lack of available testing kits, Arrowsmith said. The swabs collected are then delivered to a lab where they can be processed.

For more information about the hospital’s testing site, call 671-2020.

Rocio Valdez, communications director for Ampla Health, said the team stationed at the Ampla offices along Sutter Street are expecting the number of people coming to the site for screening and testing to increase significantly in the days ahead.

“We are open to the public. Anyone can show up and get screened in our drive-thru. It’s important to mention, though, that not everyone will be receiving testing, because they have to meet certain CDC criteria or guidelines in order for us to administer the test,” Valdez said.

She said it was important for Ampla Health to open up the process to anyone that wants it free of cost to provide them with peace of mind during this difficult time. The majority of those that had shown up to the site as of Wednesday didn’t meet the criteria of being tested.

Valdez said Ampla Health and its centers are dedicated to remaining open throughout the current public health situation.

“On behalf of Ampla, we are advising and emphasizing the importance of people staying home at this time and not coming in unless their particular situation requires medical attention,” she said. “Many of the things people think they need to come in for, like medication refills, can be done over the phone -- just call us first.”

The screening and testing site at Ampla Health will be operating over the weekend, though hours vary. For more information, call 812-2031.

Greg Stone, CEO of Peach Tree Health, said his team has seen the number of people coming to the site increase by the day. He expects that to increase even more moving forward.

“We are telling everyone to call first before showing up,” Stone said. “We are still under strict guidance to triage patients that feel they may need to be tested, particularly because there aren’t enough test kits for everyone and not everyone is going to have this virus.”

Stone said he estimates about 4-6 tests have been administered a day at the site this week. He said the clinic’s phones have been ringing off the hook all week as well.

“Every day we are seeing more people qualify for testing. We are just now starting to get some results back,” he said. “Right now, it’s taking about a week to get those back, and that might take even longer once more tests are administered. It’s been a frustrating time for many patients having to wait for their results, and I completely understand.”

Peach Tree Health plans to run the screening and testing site seven days a week at the corner of Fifth and H streets – the organization’s Marysville Immediate Care Clinic. Those interested in being screened or tested are encouraged to call 749-3242 (ext. 1408/1608) before showing up to the site.