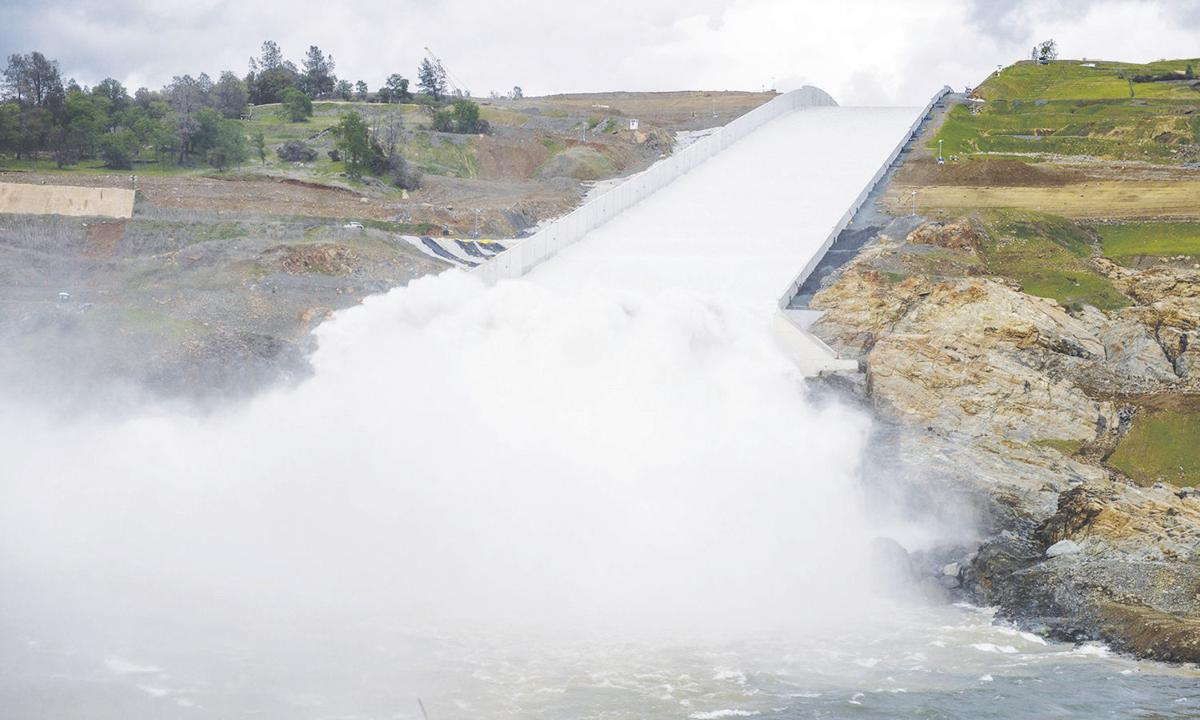 The California Department of Water Resources releases water from the Lake Oroville flood control back in April down the newly-constructed main spillway. 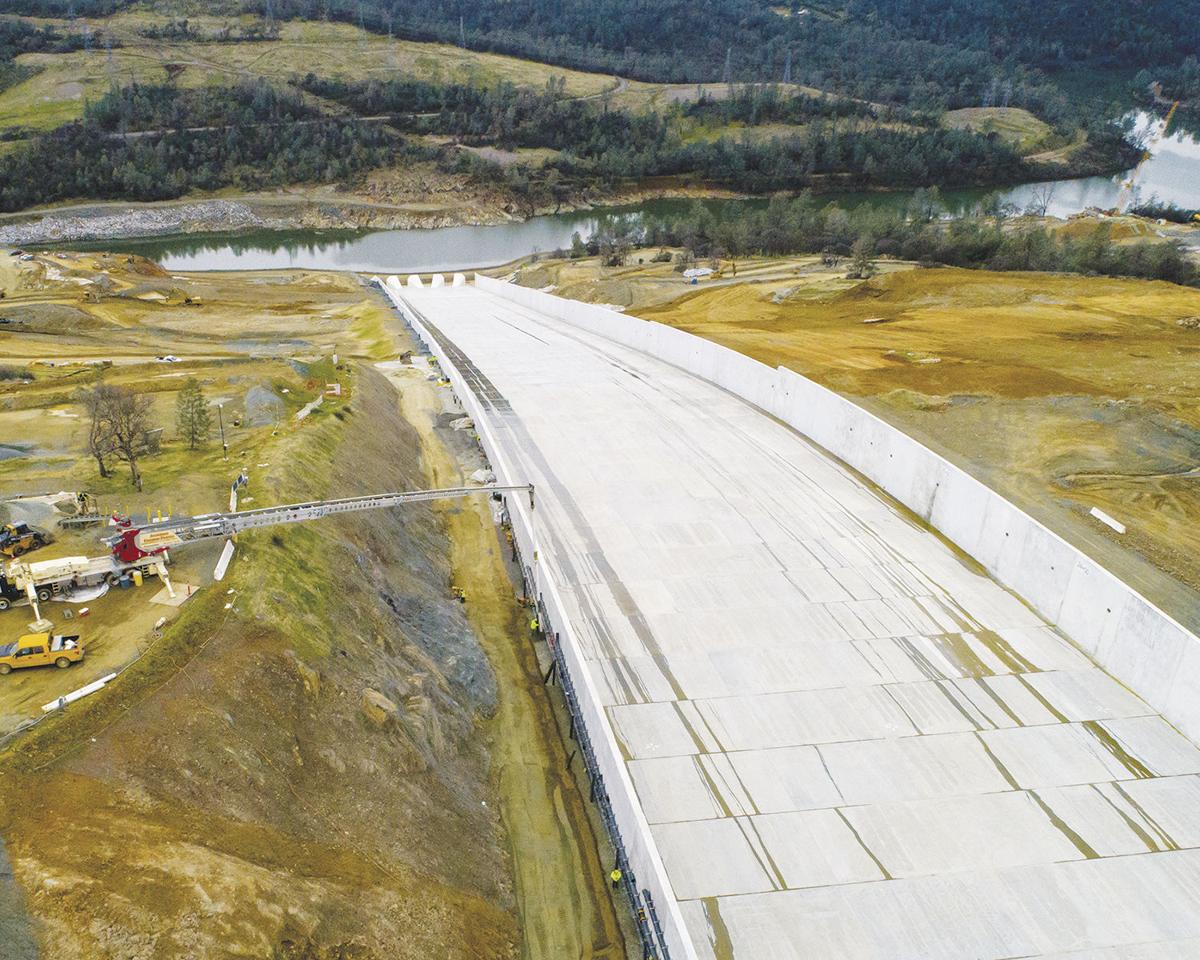 A drone provides a view of the recently completed Lake Oroville main spillway while backfill operations continue to raise the area around the underdrain piping system outside the sidewalls of the spillway in Butte County, California. Photo taken February 12, 2019. Kelly M. Grow / California Department of Water Resources.

The California Department of Water Resources releases water from the Lake Oroville flood control back in April down the newly-constructed main spillway.

A drone provides a view of the recently completed Lake Oroville main spillway while backfill operations continue to raise the area around the underdrain piping system outside the sidewalls of the spillway in Butte County, California. Photo taken February 12, 2019. Kelly M. Grow / California Department of Water Resources.

The California Department of Water Resources still has unfinished business at Lake Oroville, despite completion of major construction on the spillways earlier this year following the 2017 events that triggered more than 180,000 people living downstream to evacuate.

Major construction on the main spillway that was heavily damaged in 2017 was completed this spring by Kiewit Infrastructure West Co., along with the emergency spillway next to it. The company’s contract work is expected to be substantially complete this December with the contractor fully offsite by next spring.

“The next significant phase of work is the rehabilitation of the areas impacted by construction,” said Elizabeth Whitmore, a public information officer for DWR’s Oroville Field Division. “This work will be at a much smaller scale than the spillways reconstruction. DWR is also constructing a number of security enhancements across all dam facilities, and routinely performs regular maintenance work to ensure the safe and effective operation of the entire Oroville Dam facility.”

The most recent estimates show the work has cost $1.1 billion since it began in 2017.

Whitmore said the main spillway and emergency spillway were reconstructed using the best engineering practices available and with oversight by state and federal regulators to ensure DWR’s ability to manage reservoir levels and provide flood protection for the surrounding communities.

The main spillway was damaged in early 2017 after DWR made significant releases from the structure as the lake was filling up during a major storm. Officials shut off the main spillway to prevent further damage, and the adjacent emergency spillway was used, but the water started eating away at the hillside, which caused the subsequent evacuation of several downstream communities for fear of flooding.

Earlier this year, the state department partnered with the Yuba Water Agency, the U.S. Army Corps of Engineers and the University of California San Diego’s Scripps Institution of Oceanography to implement “forecast-informed reservoir operations,” or FIRO, to help reduce flood risk and improve public safety by using weather forecasts to determine the optimal releases from the dam ahead of threatening storms.

DWR is also working with the Federal Energy Regulatory Commission to have its license to operate the reservoir extended. Whitmore said the department has submitted all of the required documents and permit approvals and awaits FERC’s decision.

“The new license will allow DWR to initiate new projects that will benefit environmental, recreational, cultural, land use, and engineer and operations resources,” she said. “It will also allow for substantial investment in the Supplemental Benefits Fund providing economic resources to be used toward projects selected by local participants.”

Emergency operations managers in the Yuba-Sutter area say they feel confident in the work DWR has done since the spillways experienced damage.

“They have made substantial infrastructure investment in the dam operations to ensure safety,” said Zachary Hamill, emergency operations manager for Sutter County. “However, we must always be mindful of the potential for runoff from the Sierra Nevada necessitating high flows out of the Oroville and other surrounding dams during the winter, and be prepared for possible flooding.”

One of the issues many local officials raised in the days that followed the mass evacuation was the lack of communication between themselves and DWR. Yuba County OES manager Scott Bryan said those lines of communication have since been opened and his office is frequently provided information by DWR. Local agencies also coordinate with DWR on the dam’s Emergency Action Plan, which is updated annually.

Hamill said the area is more prepared now for a potential flooding event than it was back in 2017. Some of the reasons include after action reports counties have adopted that have helped officials learn from the experience and make improvements; there is now a single emergency notification and alert system that improved communication; and local jurisdictions are working together on joint emergency management training and exercises. Hamill said Sutter County is also using a grant it received to conduct a basin wide emergency response plan.

“I feel that the county as a whole worked together well during the incident. I know there was a lot of frustration and concerns voiced by the citizens. If we can take two things away from the incident, I would hope that the citizenry is ready to evacuate at a moment’s notice and they are signed up for emergency alerts through CodeRED at www.bepreparedyuba.org,” Bryan said.

Sutter County residents can sign up for mobile alerts at www.bepreparedsutter.org.

Assemblyman James Gallagher said he too was confident in the work done by DWR on the spillways. Still, he has some unanswered questions he’d like the state to address, like what further improvements can be made at the site to improve overall safety, if a second spillway or low-level outlet is needed, and if DWR should hold less water in the reservoir in winter months when the state has a significant snowpack.

Whitmore said DWR is currently conducting a Comprehensive Needs Assessment to consider future improvements to the Oroville Dam safety. Gallagher said that process has provided a seat at the table for members of the public as the improvements are being considered. He also credited Senator Jim Nielsen for writing a piece of legislation that helped establish an Oroville Dam Citizens Advisory Commission to help improve the lines of communication between DWR and the public.

Gallagher said he’d like to see DWR settle the legitimate claims made from the 2017 incident from those that were impacted by the spillway failure.

“DWR should also get serious about cleaning up the Feather River and the massive sediment buildups,” he said. “I’d also like to see the findings of the Independent Forensic Team addressed.”