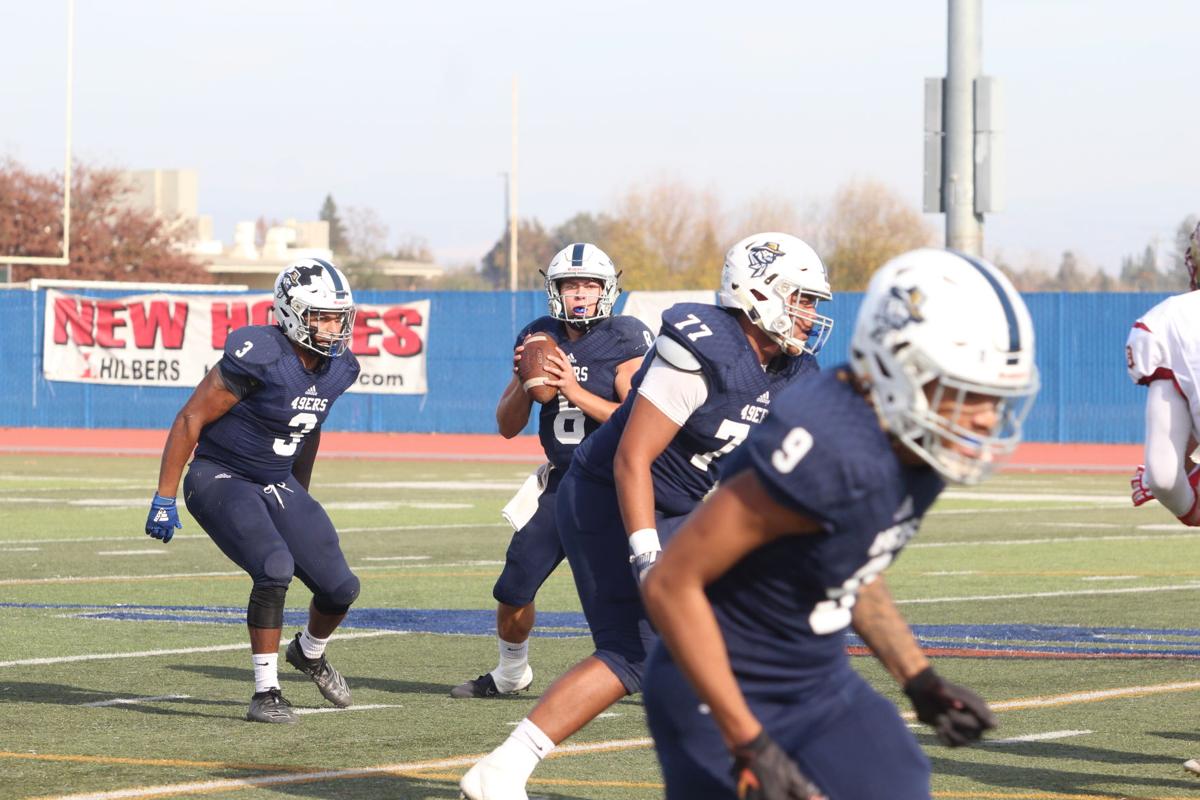 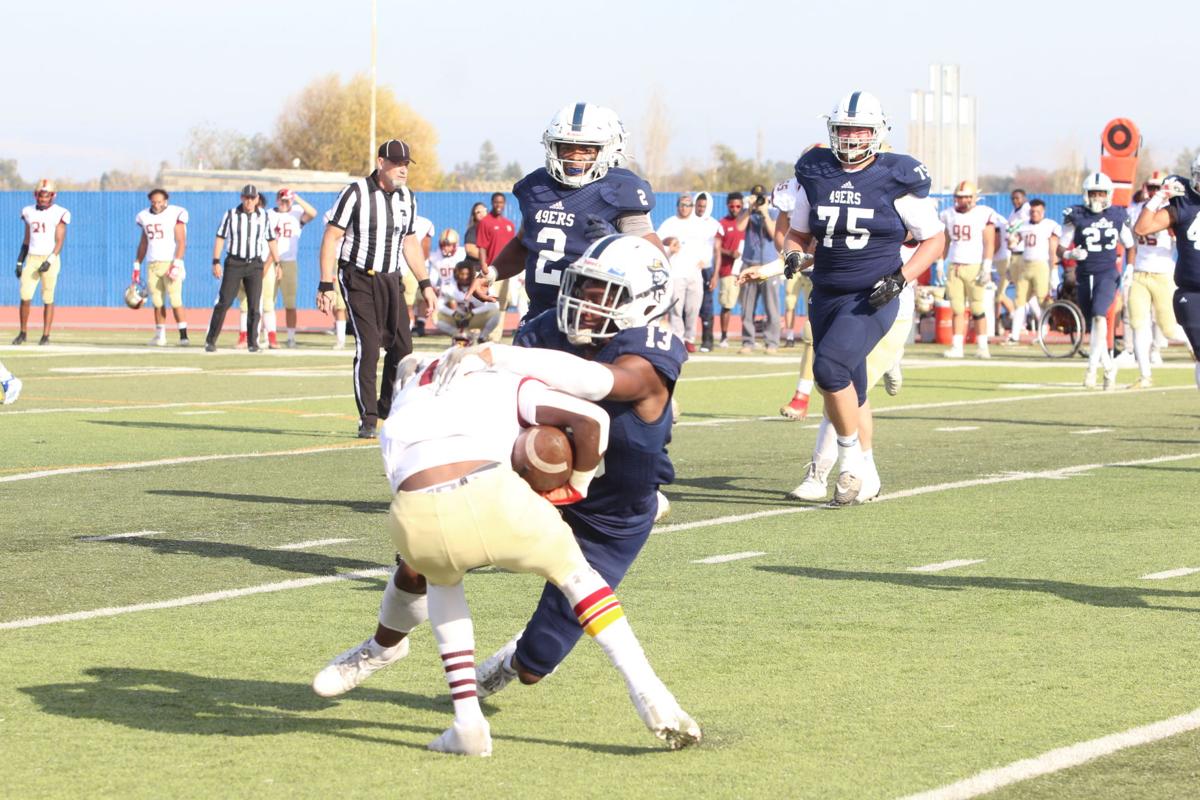 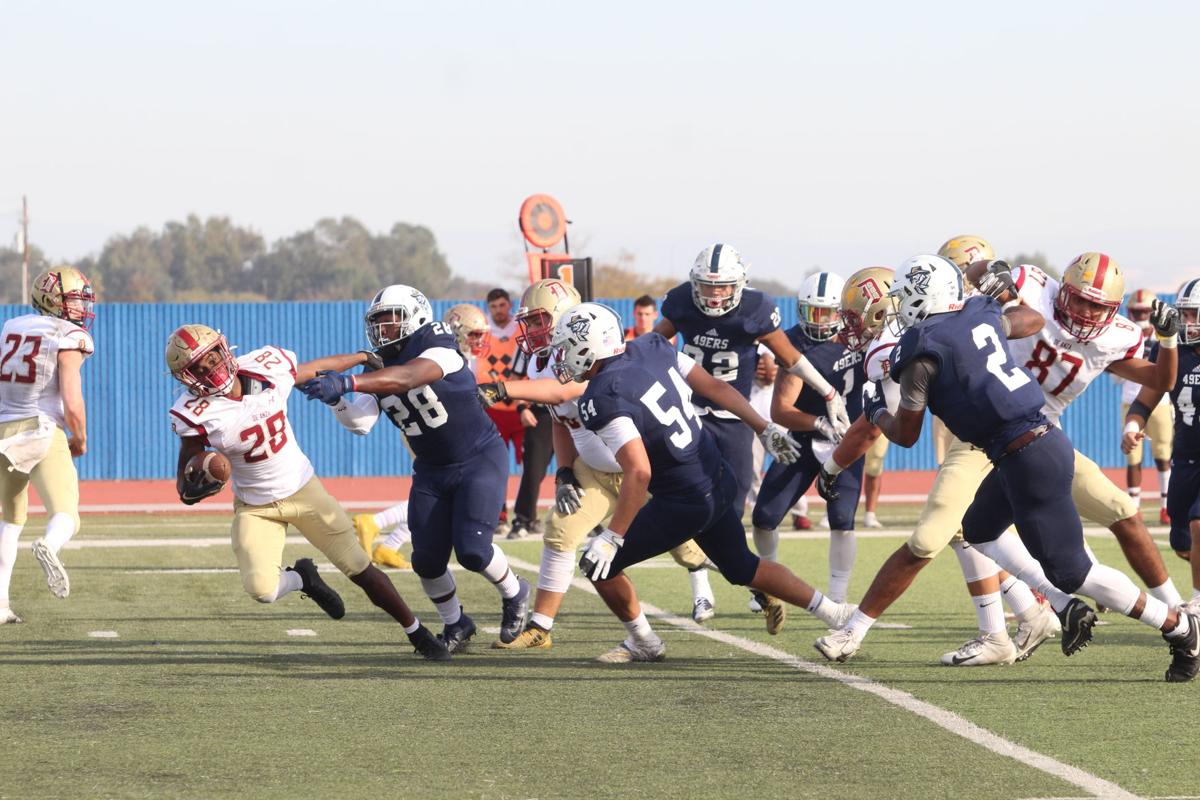 Corry Sanders made the best of his playing time for the Yuba College football team.

Getting the nod to take most of the snaps in the second half of Saturday’s Pacific-7 and home finale against DeAnza College, Sanders found success twice for the 49ers. Then teammate Charles Farmer also discovered the end zone.

But the visiting Dons were just as successful earlier in the game. That led to snapping the 49ers’ three game winning streak with a 31-18 win.

Sanders, who stepped in for starting quarterback Mason Whitfield, completed three passes, all to wide receiver Daniel Davis of 8, 7 and 30 yards. Those passes moved the 49ers to the Don 33. After Yuba College running back Alando McDonald gained two yards to the Don 31, Sanders hit wide receiver Tayshawn Clayton, who was running a slant pattern. Running down the Yuba College sideline, Clayton slipped past one tackle and side-stepped another DeAnza College defender while running to the north end zone for the touchdown.

“We wanted to see what Corry can do,” said Pettengill of Sanders. “I wanted to try to give us a different look, try to get the ball into the end zone. I thought Corry did a pretty good job.”

The extra-point kick was no good, but snapped DeAnza College’s bid of posting a shutout, as the score was at 31-6.

Both teams exchanged punts to take time off the clock to end the third quarter, entering the final quarter. DeAnza College (4-1 in the Pacific-7 and 6-4), deep at its own 4, had three incomplete passes.

Then the fourth one landed into the hands of Yuba College defensive back Charles Farmer, who picked off Patrick Lopiparo pass – and his second interception of the game – and raced 25 yards for the touchdown with 11:44 left in the game to make it 31-12. The 49ers’ opted for the 2-point conversion, a pass that was incomplete.

A DeAnza College turnover led to the 49ers scoring their final touchdown of the game and season. Don quarterback Carl Schofield II threw a pass that Yuba College linebacker Zavionne Wilson, a freshman from Kennedy of Sacramento, and ran it back to the Don 24.

Six plays later Sanders accounted for the 49ers’ touchdown. This time, on his feet on a 3-yard run with 4:39 left in the contest to make it 31-18. Yuba College opted for another 2-point conversion, another pass that also failed.

“If we put that 2-point conversion in, we’ll down by a touchdown and a field goal,” Pettengill said.

The remaining minutes of the game had both teams exchange offensive possessions. Yuba College ended its season with the football at its own 32-yard line.

DeAnza College scored twice in the third quarter to expand its 21-0 halftime lead to 31-0. Quarterback Jordan Ausbie – one of six quarterbacks listed on the Dons’ roster – scored on a 51-yard run with 5:43 left in the quarter to make it 31-0.

Yuba College, behind 14-0 early in the second quarter, looked like its defense was going to aide in scoring. Farmer had his first interception deep in the 49ers’ territory with 12:32 left.

Then 10 players later, 49er place-kicker Marcus Topete trotted onto the field to boot a 38-yard field goal with 7:10 left in the quarter. But the Dons’ middle defensive line and middle linebackers partially blocked the kick, as the football bounced on the field and DeAnza College recovered.

Although unable to capitalize after the blocked kick, DeAnza College scored with 32 seconds left in the second quarter to make it 21-0. That is when quarterback Schofield II hit wide receiver Keyshaun Mcleod on a 12-yard strike. Gonzalez booted the extra-point.

DeAnza College scored its first two touchdowns in the first quarter, also courtesy of Yuba College turnovers. One of those miscues was on the actual play, as DeAnza College outside linebacker Joncheve Butler scooped up a loose football at midfield and ran 49 yards for a touchdown with 5:51 left to make it 14-0.

Mike Bush is a sports writer for the Lodi News-Sentinel, which is the Appeal-Democrat’s sister newspaper. Follow him on Twitter: @MBushLodiSports.