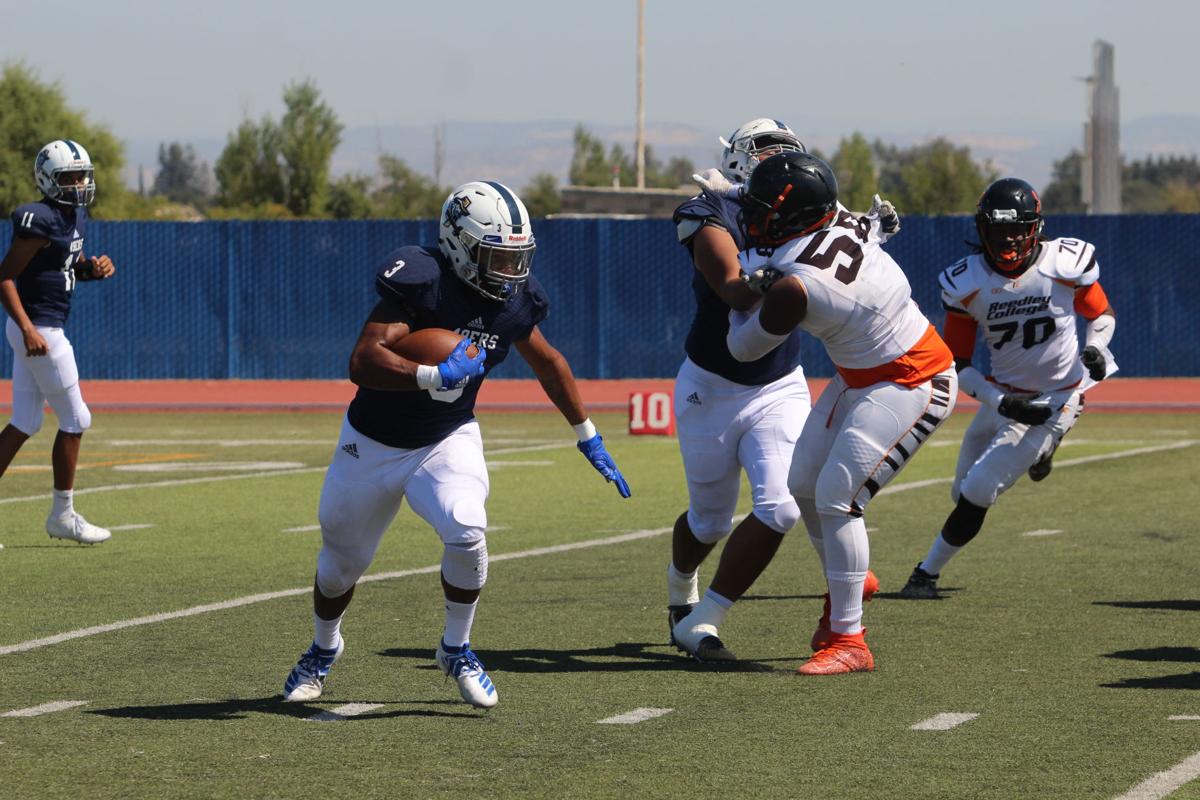 Yuba College running back Dwayne Yiggins finds room to run outside in the first quarter of Saturday’s home game against Reddley College. 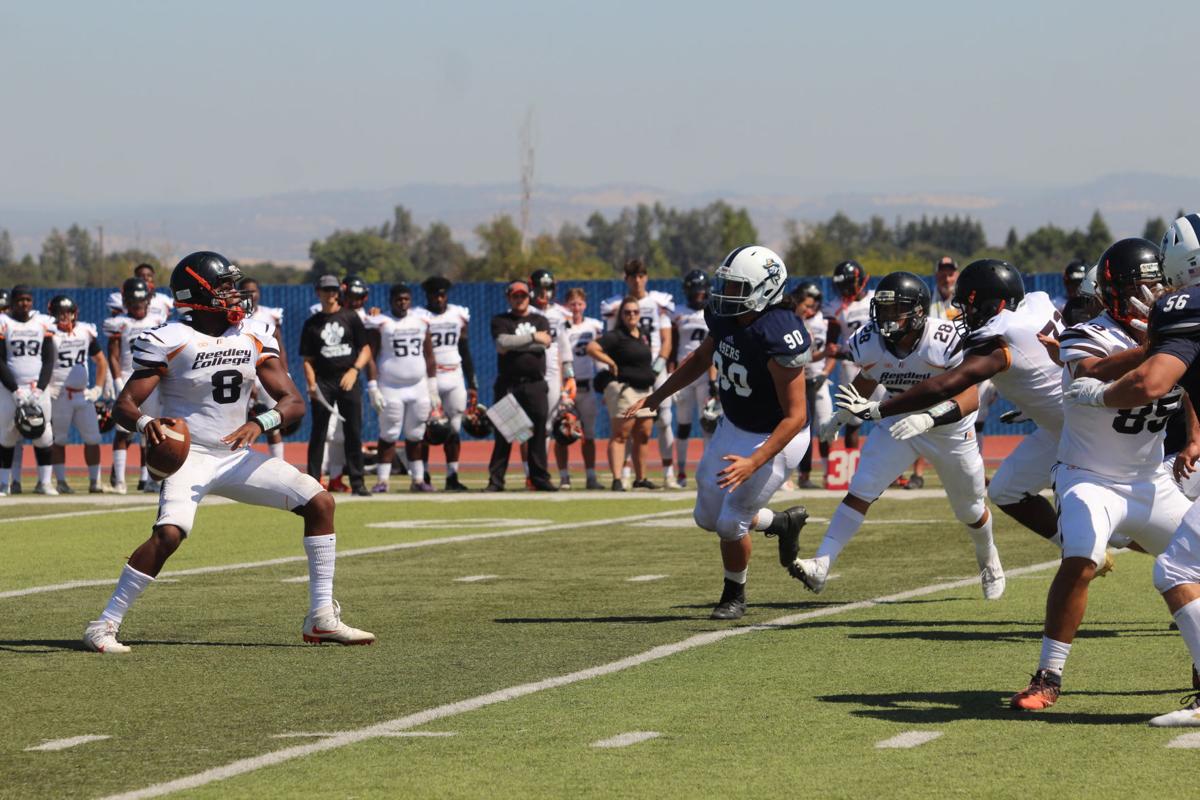 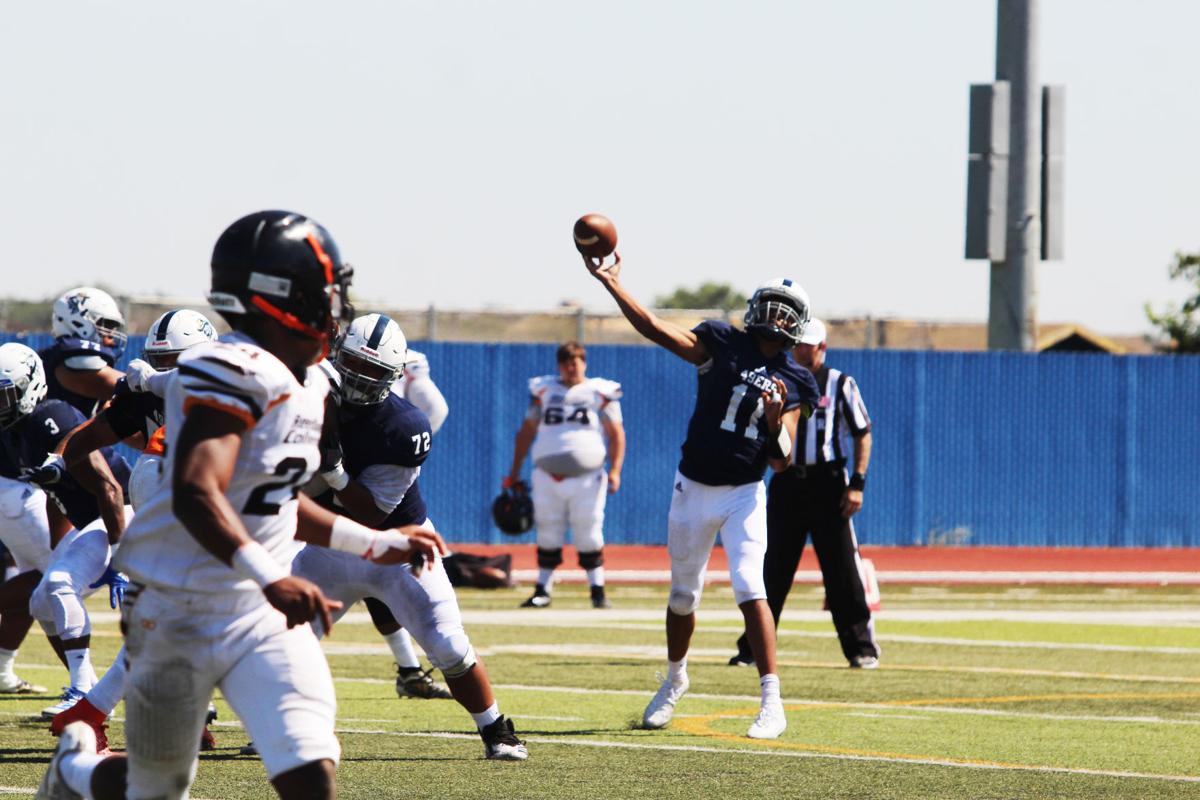 Yuba College running back Dwayne Yiggins finds room to run outside in the first quarter of Saturday’s home game against Reddley College.

Mason Whitfield stayed in the pocket and found an open Yuba College football teammate down the field.

The 49ers’ quarterback connected with teammate Daniel Davis in the south end zone of the 49ers’ field in the fourth quarter of Saturday’s home and Pacific-7 game against Reedley College’s squad. But the Tigers had already taken quite a bit of bites out of the 49ers that led to a 38-8 win.

“We’re just not consistent right now,” said new Yuba College head coach Mick Pettengill. “It’s frustrating from where we were last year (8-3) to where we are right now. Just inconsistent play over and over again; fumbles, turnovers. Stuff we work on, but we’re not executing right now.”

One of the pluses for Yuba College (0-2) was its defense. In the early minutes of the second quarter, and Reedley College leading 14-0, Yuba College defensive back Kievoughn Baylor-Smith had an interception. But the 49ers went three-and-out from their own 27-yard line.

More defensive standouts were the play of Yuba College linebacker Rodney Melton and defensive tackles Scott Sanchez and Ramon Flores, all of whom had multiple sacks on Reedley College quarterback Bubba Hickson in the game.

“We’re not being out manhandled,” Pettengill said.

Yuba College safety Adrian Borja-Garcia recovered a Reedley College fumble at the Yuba 48 that led to the team’s only touchdown of the game in the final quarter.

At 4:01 on the clock in the fourth, Whitfield, still in the pocket, found Davis on the south end of the field. Then Davis slipped past two Reedley College players and ran into the end zone 28 yards for the 49ers’ first touchdown of the season – Hartnell College posted a 28-3 win over Yuba College in the season opener for both teams on Sept. 7. The score cut into the Tigers’ lead at 31-6.

Opting for the two-point conversion, Yuba College was successful when Whitfield found Davis again, this time in the middle of the end zone for a 31-8 score.

The 49ers went for the onside kick in hopes of establishing some type of offensive rhythm in the final few minutes of the game. But the Tigers recovered the football at the 50.

Then nine plays later, Reedley College running back Elijah Hawkins scored on a 6-yard run with 56.1 seconds left in the game. Jorge Rosales booted the extra-point for what would lead to being the final score.

“We’d get three yards, and then a penalty,” said Pettengill, whose 49ers were whistled for about a dozen times. “I’m kind of hoping this will wake up our offense, kind of get them a little bit more hungry and hold each other accountable.”

Earlier in the quarter, Yuba College had the football twice at the Tigers’ 34 and 45-yard lines. But losing the ball on the first possession on loss of downs and Reedley College defensive end Okiki Olorunfunmi intercepted a Sanders pass to shoot down those chances.

“Seventeen to nothing against a good offense,” said Pettengill of the Tigers’ attack. “I felt like the defense did really well; I was really proud of them.”

The Tigers’ first score was quarterback River Walker scoring on a 1-yard QB sneak with 10:45 remaining on the clock to make it 24-0. The final touchdown came at 3:42 when quarterback Payton Mayer threw a 5-yard pass to wide receiver Andy Pierre-Antoine for a 31-0 score.

Rosales booted a 25-yard field goal in the second quarter that gave the Tigers a 17-0 lead. He attempted another field goal with 10 seconds left in the quarter at the south part of the field, but the football sailed wide to the left side of the goal post.

After Rosales’ first field goal the 49ers worked the football down to the Tigers’ 34. Marcus Topete, a freshman out of Live Oak, attempted a 51-yard field goal toward the end of the second quarter. But the Tigers blocked the ball.

After playing its next two games at Merced College this Saturday and at Los Medanos on Saturday, Sept. 28, Yuba College will be back at home against Foothill College on Saturday, Oct. 5.