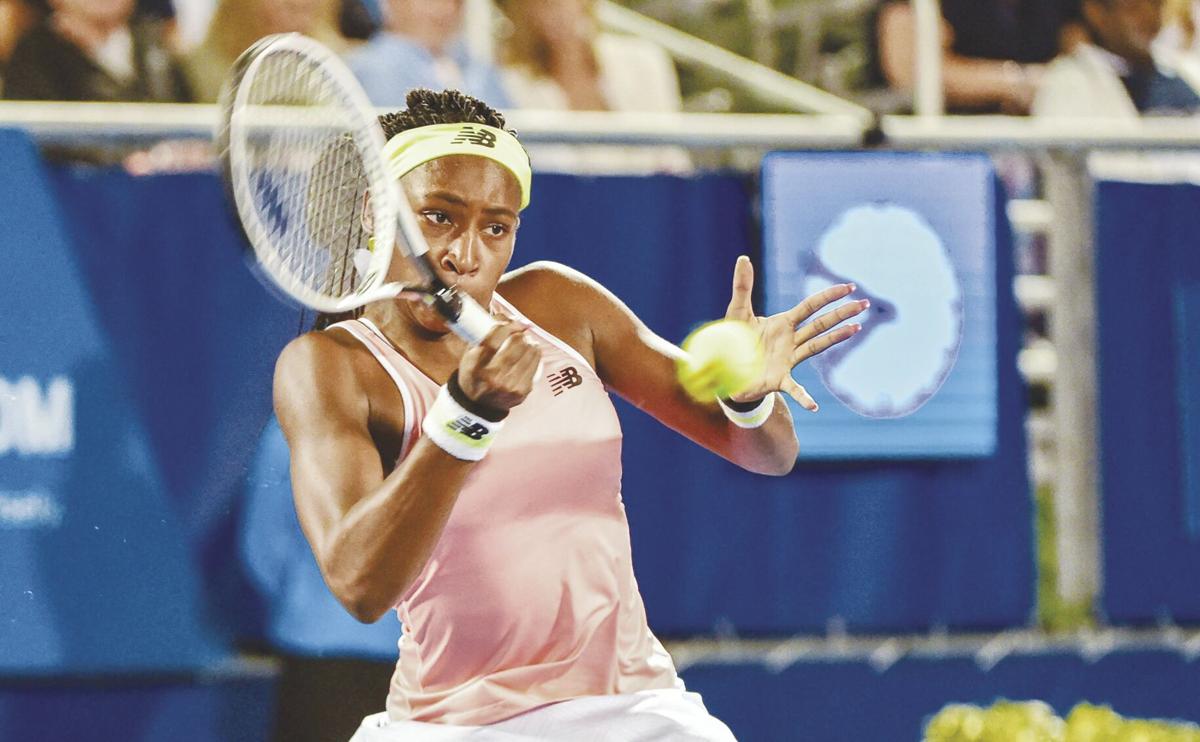 Coco Gauff gets ready to hit a return against Estela Perez-Somarriba during Saturday night’s exhibition match 6-3, 6-3 win at the Delray Beach Open. [JEFF ROMANCE/SPECIAL TO THE POST] 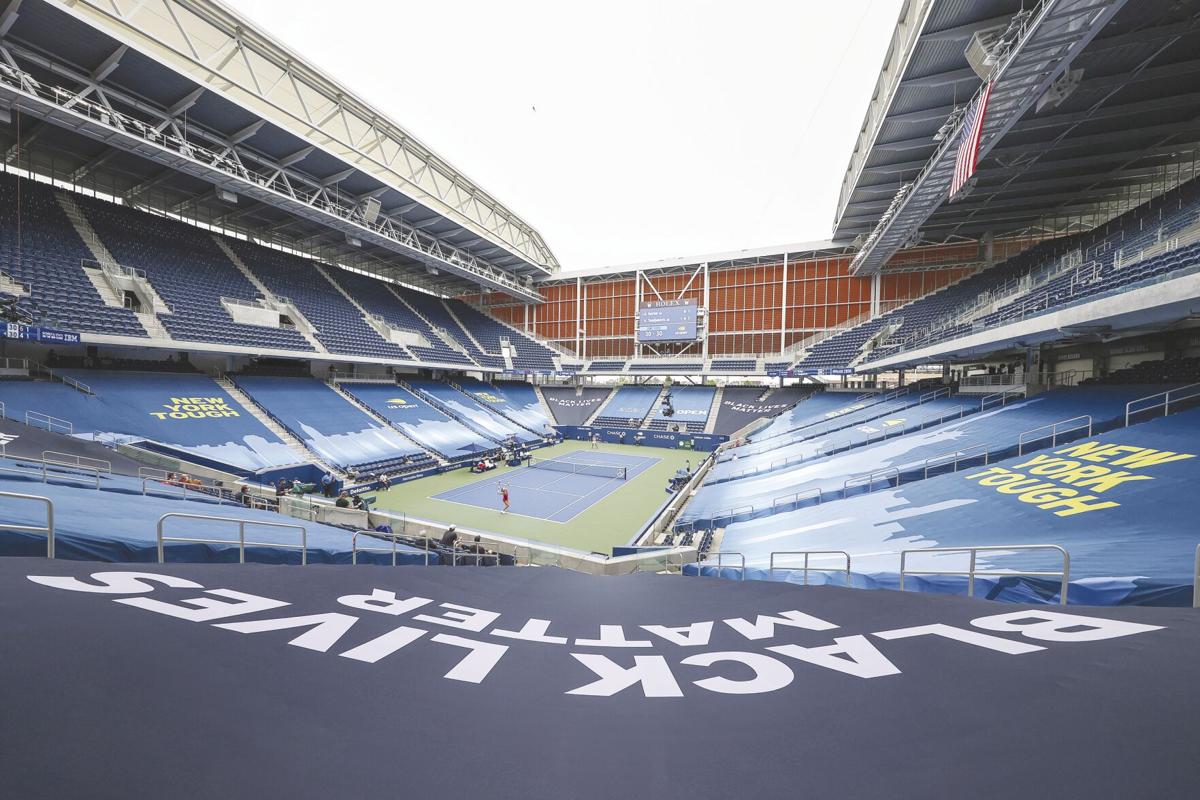 "Black Lives Matter" and "New York Tough" signage is seen in Louis Armstrong Stadium as Angelique Kerber of Germany plays against Ajla Tomljanovic of Australia during their Women's Singles first round match on Day One of the 2020 U.S. Open at the USTA Billie Jean King National Tennis Center on August 31, 2020 in the Queens borough of New York City. (Al Bello/Getty Images/TNS)

Coco Gauff gets ready to hit a return against Estela Perez-Somarriba during Saturday night’s exhibition match 6-3, 6-3 win at the Delray Beach Open. [JEFF ROMANCE/SPECIAL TO THE POST]

"Black Lives Matter" and "New York Tough" signage is seen in Louis Armstrong Stadium as Angelique Kerber of Germany plays against Ajla Tomljanovic of Australia during their Women's Singles first round match on Day One of the 2020 U.S. Open at the USTA Billie Jean King National Tennis Center on August 31, 2020 in the Queens borough of New York City. (Al Bello/Getty Images/TNS)

I wasn’t prepared for the sanitizer gun.

That’s probably not the correct label for this contraption near the outdoor dining area, but it’s an apt description. There’s a foot pedal at the bottom, and a hand sanitizer bottle covered by metal. It felt logical, at first glance, that pressing the pedal would lift the metal top to uncover the bottle for conventional and manual use.

Instead, sanitizer shot at my crotch. I retreated in shame.

Luckily, two factors contributed to a speedy recovery: sanitizer is colorless and absorbs rapidly and there aren’t many people around the US Open to witness my horror. Never before had Flushing’s human-to-sanitizer ratio felt so skewed in the favor of rubbing alcohol. This is live sports in 2020.

The first day of the Open was, to put it mildly, a bit different. Without fans, the grounds – normally flooded with people – carried the look and feel of a hotel resort in its down season, or a college campus in July. Employees, athletes and coaches still roamed the area, but the stores were closed and the pop music pumping through the speakers was the dominant sound. Signs were propped up everywhere asking us to wash our hands, keep our distance, wear our mask and call a phone number if we’re not feeling well. COVID-19 testing is mandatory every four days for entry, including for media members, which is reassuring since not all of us can operate a sanitizer gun.

For entertainment, a mini-golf course was set up in the courtyard. There was also a pool table, a cornhole game, a basketball hoop and a foosball table. These amenities went largely unused, however. The athletes were more drawn to the makeshift gym in the Mercedes Benz Brand Center, which would normally showcase luxury cars but Monday held treadmills and stretching stations. Again, it was like the Billie Jean King Tennis Center was converted to a Marriott resort.

Then there were the oddities of the matches.

Beyond the awkward silence with no fans, the biggest difference was the absence of line judges on the smaller courts because the USTA wanted to limit the number of people on the court. The ball people remained (in reduced numbers), but apparently the line judges were deemed expendable everywhere except Ashe and Armstrong Stadiums. They were replaced by an army of small cameras surrounding the courts which determined each call electronically. If a ball crossed the line, it would somehow trigger a voice over the speaker to shout, ‘Out.’ The foot-pedal sanitizer squirter wasn’t the only pandemic-inspired innovation beyond my comprehension.

Removing the human element was seamless and actually refreshing. I witnessed zero arguments about calls. The chair umpire’s job was easy. At one point, Egor Gerasimov, a Belarusian who was played in front of about five people on a side court, took small issue with a call on the baseline. The umpire simply pointed to the screen, which showed a replay with the computerized location of the ball, and said, “Look.” End of argument.

Nick Kyrgios would probably find a problem with the computer, but he opted out of the tournament like many other top players.

Among the other quirks:

– The towels. Who would think these germ-infested cloth pieces could be such a pain? Each player was basically assigned their own that nobody else – not even the ball people – could touch, which meant long walks in between points for wipedowns. When Coco Gauff, for instance, wanted to clean the sweat from her brow (which she did often in Monday’s afternoon match), she went back and forth to the corner of the court for her blue towel. Then during changeovers, she retrieved that same towel and put it in the opposite corner before repeating the routine.

– The noises. Or lack thereof. Family members and coaches mostly made up the crowd for the matches, and their claps were about the only sounds besides player grunts. Kristina Mladenovic, who pummeled young American Hailey Baptiste, seemed to forget there was no audience when she spun around and waved at a non-existent crowd following the final point on Court 17. Angelique Kerber, the 2016 Open champion, likened it to a practice atmosphere. “But of course you also know it’s like a serious game,” she said.

– The post-match handshake isn’t a handshake at the 2020 Open. The players just touch rackets at the net, and now we’re curious to see what an angry and aggressive racket shake looks like.

To be clear, this is all very smart. Only about four months ago, New York was the epicenter of the COVID-19 pandemic with hundreds of daily deaths. Now we’ve calmed the virus and are hosting the first tennis Grand Slam of 2020. Nobody else was ready – not Paris, not Wimbledon, not Australia. It says something awesome about where we’ve come that an international event feels safe in Queens, the same borough that was ravaged by COVID in April, even without a true bubble like the NBA’s.

I left Monday’s opening day not only feeling good about the safety of the event, but also about its ability to crown legitimate champions despite some depressing circumstances. As a bonus, I also left with sanitized pants.