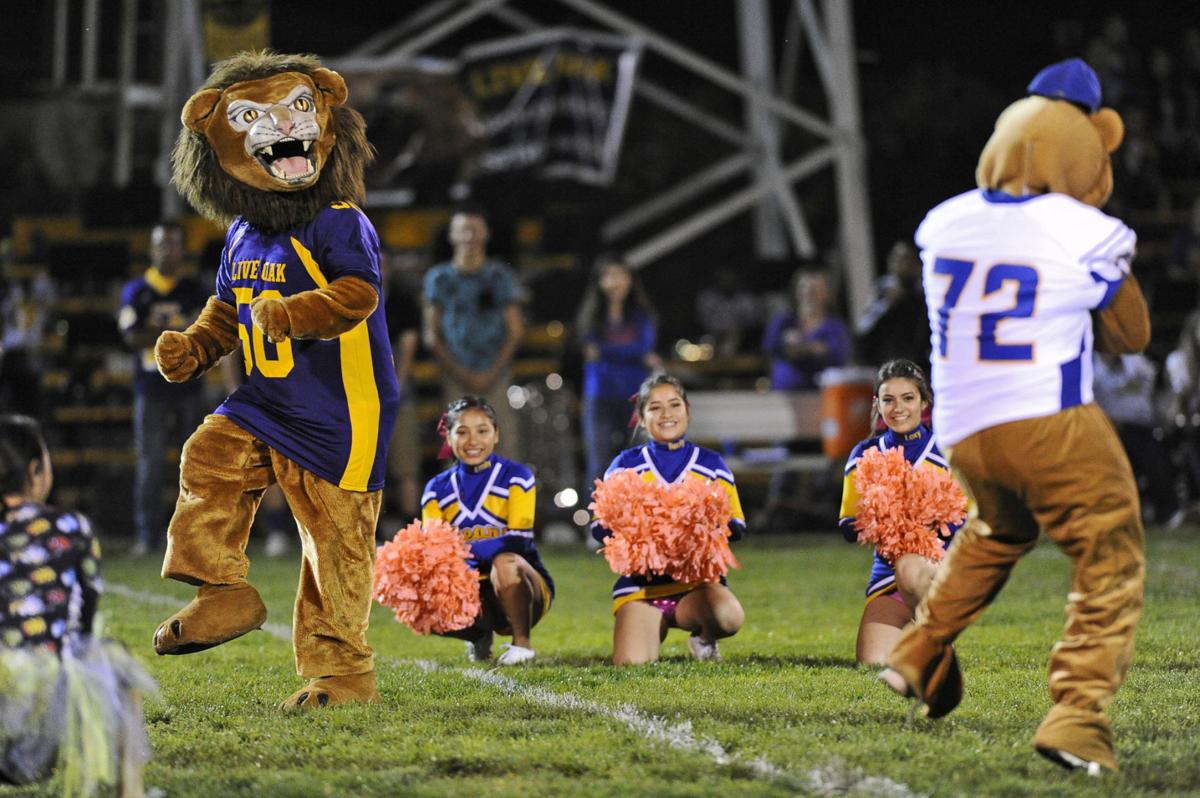 The mascots for Pierce and Live Oak high schools have a dance off during halftime on Friday, October 9, 2015 at Live Oak High School. 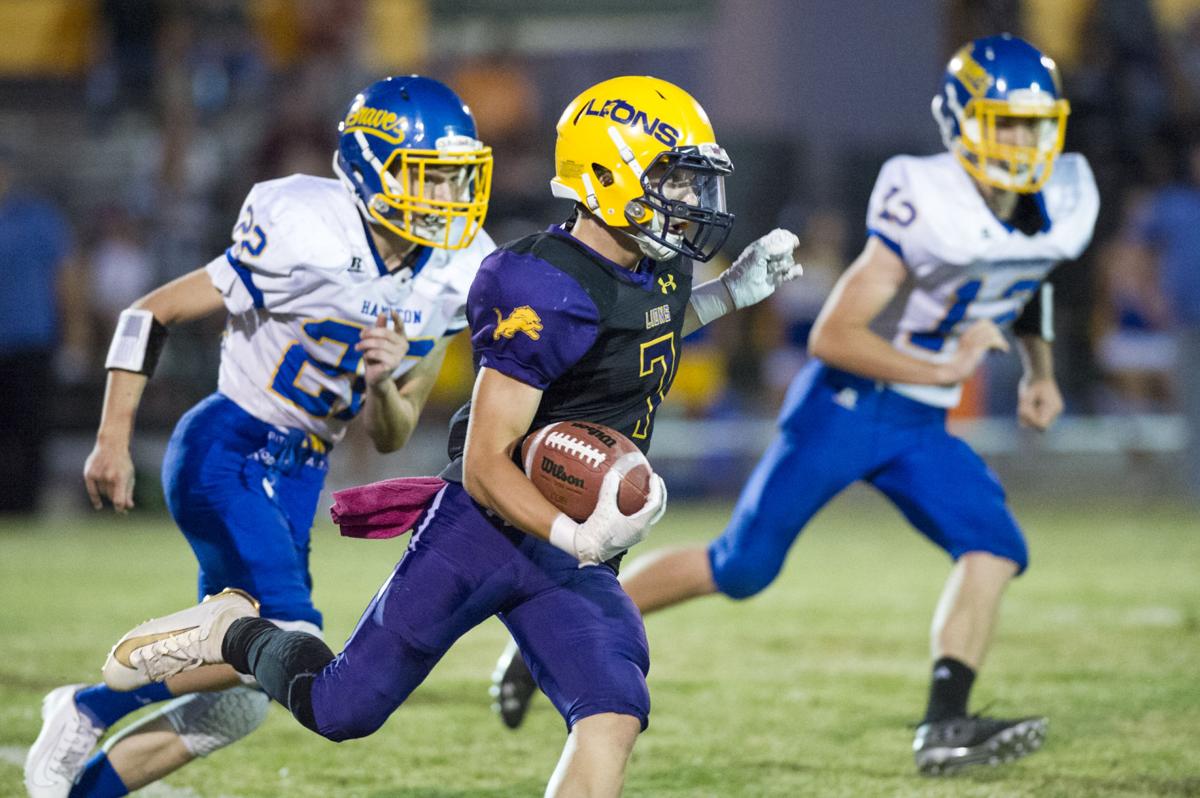 Live Oak High’s Odin Moody runs for a touchdown during a game against Hamilton on Friday in Live Oak.

The mascots for Pierce and Live Oak high schools have a dance off during halftime on Friday, October 9, 2015 at Live Oak High School.

Live Oak High’s Odin Moody runs for a touchdown during a game against Hamilton on Friday in Live Oak.

The Live Oak High football team is not only on the verge of returning to the playoffs for the first time in seven years, but the Lions are in contention for the Sacramento Valley league regular season championship with two weeks to go.

Tonight Live Oak travels to Arbuckle to take on Pierce in a battle between a pair of unbeaten teams in league. The winner closes to within a game of clinching the SVL title and all but locking in place a home first-round Northern Section playoff game.

Live Oak is coming off a bye following its section-awakening win over three-time reigning D-IV runner-up Durham, 28-12 back on Oct. 18. Jim Arostegui’s team outscored the injury-plagued Trojans 28-0 at one point and held Durham to just six points in the second half.

Live Oak (6-2, 4-0) running back Odin Moody had four touchdowns and leads the team with 12 rushing scores and over 1,100 yards through eight games. Moody is averaging nearly a first down on each attempt behind an offensive line that runs big across the board, including at tackle where Tony Salazar is listed at 6-foot-5, 310 pounds.

Live Oak will also utilize the services of fullback Hayden Langley, while quarterback Tony Vallejo has scored four touchdowns on 19 rushes this season.

Through the air Vallejo has a couple tall targets in Eddie Torres and sophomore Ta’jon Bloomer, who will likely be used sparingly throughout the night to keep Pierce off-balance defensively.

Pierce (6-2, 4-0) blew out Winters on the road last week 43-7 to stay undefeated heading into its senior-night battle against Live Oak.

Live Oak sits fourth in the D-III playoffs, while Pierce comes in No. 2 in this week’s edition of the division IV playoff points that were released Monday by the section.

The Blazers will finish out their season tonight when they make the trip to play the Mustangs.

This season has been full of ups and downs for the Blazers. As an offense, Lindhurst is averaging just under 17 points per game. While this isn’t anytime to write home about, it’s certainly not too shabby either.

The future of the Blazers offense is certainly bright with the play of running back Simon Enochs. As a sophomore this season, Enochs has given other teams something to think about at all times.

One player to watch for on Foothill will be lineman specialist Juan Garnica Jr. The 6-foot-4, 320 lbs. senior can lineup on both sides of the ball.

Kickoff is set for 7 p.m. in Sacramento.

Tonight could be detrimental to the Falcons’ season. River Valley knows it needs a win tonight to finish .500 and give itself a shot at the playoffs later this month.

After a rough start five-game losing streak, the boys in green and black have turned things around in their last two games against Bella Vista, 49-7 and Woodcreek, 50-0.

This is much due to the play of sophomore sensation, George Baker. The elusive back has given the Falcons’ offense a much-needed spark.

One player on Antelope that the Falcons will need to watch out for is Leonard Huerta-Moore. The junior wide out has been able to average 28.2 yards per reception, including a 52-yard strike for a touchdown.

The Honkers were able to grab the attention of some naysayers last week when they lost in a tough battle against first place Inderkum, 35-20.

This week, Yuba City will face a much easier test in the Woodcreek Timberwolves. Although there are a few players that Erik Palmquist, Luke Afato and the Honkers will need to keep an eye on.

This season Woodcreek’s Grant Dinger has rushed for 712 yards and seven touchdowns. Dinger leads all Timberwolves with an average of 101.7 yards per game. The Honkers defensive line has shown it can hang with the best, so it’ll be a fun battle to watch tonight.

After a win by forfeit last week, the Spartans will hope to knock off the rust tonight when they travel to Williams for a showdown with the Yellowjackets.

Leading the East Nicolaus offense this season has been the dynamic trio of J.T. Stinson, Gavin McAuliff and Mitch Barker. Whether it’s a passing, rushing or receiving touchdown, the three of these Spartans in total have accounted for 37 of East Nicolaus’ scores during 2019.

While the Yellowjackets’ defense may have its hands full, watch out for Williams’ Jesus Jauregui. Through eight games this season, Jauregui has 61 total tackles (seven of which were tackles for loss) and five fumble recoveries. While the Spartans’ ground attack is fierce, Jauregui could give it some issues.

Leading a team in your first year is always hard, but Marysville head coach Jeff Freeman has taken it by storm. While some may say he’s only coached the Indians to three wins, he’s put Marysville in position to win in almost every game.

Despite Marysville currently sitting on a three-game losing streak, the Indians showed progression in last week’s 41-31 loss to Foothill. Not to mention, heading into the fourth quarter, Marysville led the Mustangs, 41-31.

Freeman and his squad will look to end the regular season on a high note tonight. Look for key players like Wyatt Sharp and Jerriah Mcbath to make impact plays, much like they have all season.

Ask any coach and they’ll tell you there’s no such thing as an easy opponent. But tonight, it’ll be hard for anyone to give Las Plumas a fighting chance against the seven-win Huskies.

Although Sutter is nursing some injuries, don’t expect much to change from an offense is averaging 29 points per game and a defense that has four shutouts on the year.