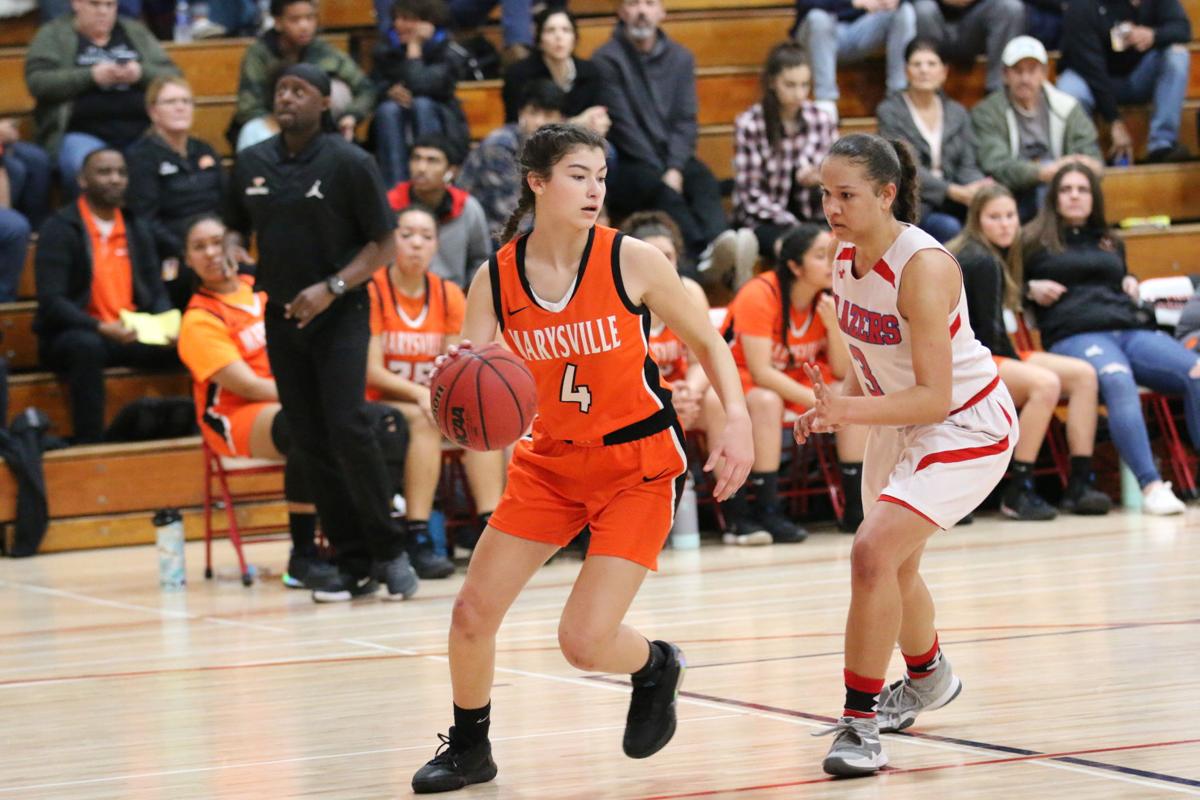 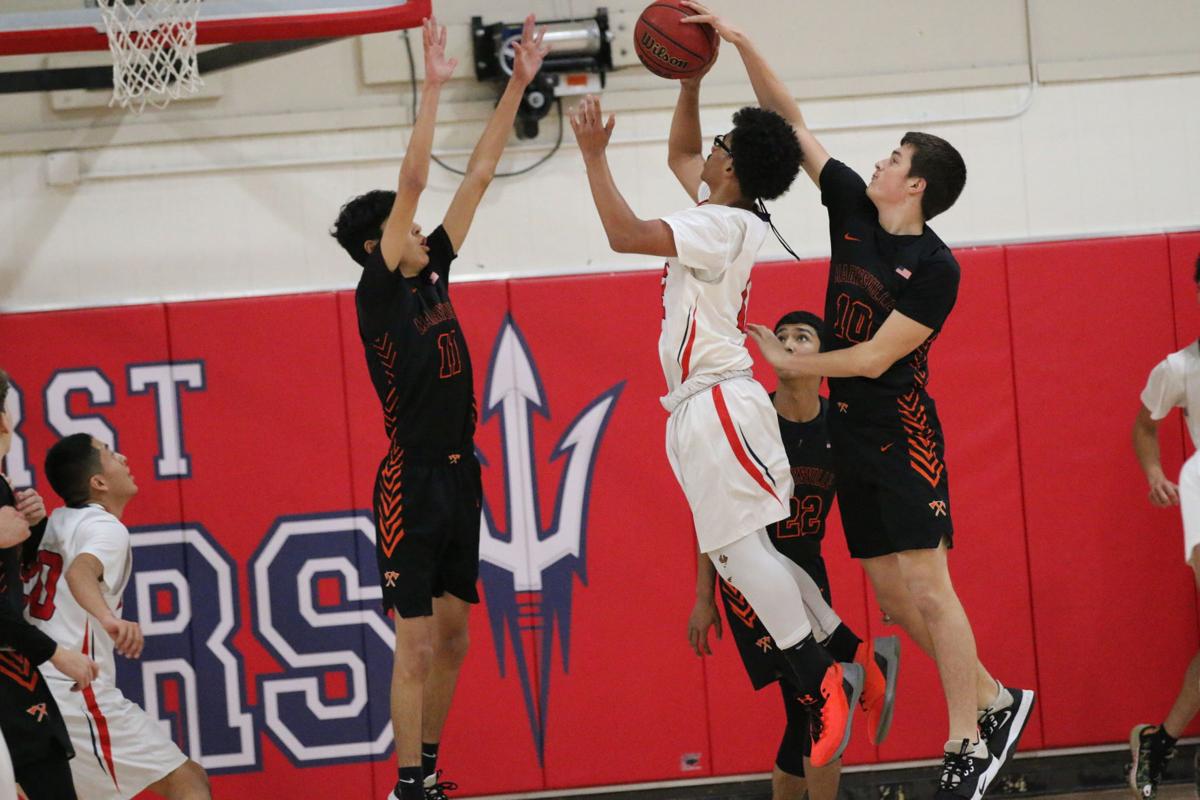 Marysville’s Anthony Gonzales (11) and Kyle Kendall (10) go up for a block during Friday’s rivalry game against Lindhurst.

Marysville’s Anthony Gonzales (11) and Kyle Kendall (10) go up for a block during Friday’s rivalry game against Lindhurst.

The Lindhurst and Marysville varsity girls basketball programs faced off for another rivalry showdown on Friday night in Olivehurst. This time it was the Blazers who came out on top as they took down the Indians by a final score of 34-30.

“These girls played really good team defense tonight and ultimately I think that’s what the difference-maker was for us,” Lindhurst head coach Bryan Lowe said.

The Blazers were led by Danika Martin with 13 points and five steals. Other notable performances for Lindhurst included Reina Schwan with eight points and Jadelyn English with eight rebounds.

The Spartans fell to their rivals on Friday night despite some notable performances from a few players.

Remmington Hewitt led the way for East Nicolaus with 11 points and eight rebounds while both Hannah O’Connnor and Karizma Faupula tallied four points in the loss. O’Connor also contributed with four assists and seven rebounds.

The East Nicolaus junior varsity defeated Durham by a final score of 27-25.

The JV Spartans were led by Audrey Gillespie with nine points and Jane Hall with eight points.

The Indians dominated the Blazers on Friday night in a rivalry showdown between two league opponents.

After the first quarter, Lindhurst led 13-11, but then Marysville took off – outscoring the Blazers 21-12 in the second and 20-2 in the third.

Marysville was led by Jagir Johal with 22 points – 20 of which came in the first half.

“I was proud of him tonight,” Marysville head coach Stan Easter said. “A lot of players would have taken a lot of shots in the second half but he read the defense and made a lot of passes since they were game planning for him,” he added.

Other notable contributors for the Indians included Anthony Gonzales with 11 points and Kyle Kendall with 10 points.

As for Lindhurst, the Blazers were led by Jordan Montes with 11 points and Kameron Ferguson with 10 points.

The Huskies bounced back from a tough road loss to Paradise on Wednesday with a sound defeat of the Trojans on Friday.

The Falcons took care of business on senior night as they took down Bella Vista by a dominant 16 points.

“It was a good atmosphere tonight and fun to see everyone who showed up to support us,” River Valley head coach David Williams said.

The Bulldogs continued their successful season campaign on Friday night coming away with an 18-point road win over Wheatland.

“It was a good overall team win for us,” Gridley head coach Chay Dake said. “It’s not easy to go into a loud road environment like that and grab a win,” he added.

Grant Tull led the way for the Bulldogs with 19 points, eight rebounds, six assists and three steals. Cameron Erickson also helped pitch in with a double-double of 14 points and 12 rebounds.

As for Wheatland, the Pirates were led by Tanner McAdams with 15 points and Dillon Malathip with 10 points.

The Lions bounced back into the win column on Friday night after tallying a road victory in Sacramento over Cornerstone Christian.

Faith Christian was led by David Villasenor, who had a monster offensive performance of 43 points. Daniel Wickline also helped out the Lions, tallying 11 points on the night.

The Huskies junior varsity team tallied a ‘W’ on Friday night, taking down the Trojans by 16 points.

The Huskies were led by Cayden Simmons with a double-double of 20 points and 15 rebounds. Other notable stats for the winning team included Amrin Mann with 22 points, Elian Gonzales with seven points and Garrett Fischell with 11 second-half rebounds.

The 49ers women’s basketball team continued their winning ways on Friday night after taking down Laney College on the road by a comfortable 29 points.

“We had a really balanced attack tonight it was fun to watch,” Yuba head coach Stewart Welch said.

The 49ers men’s team dropped it’s first loss since Dec. 4 on Friday night as Yuba fell on the road to Alameda College by six points.

Despite taking a commanding lead with just under eight minutes to go, the 49ers fell victim to some cold shooting late.

“It felt like everything that could go against was going against us, we just weren’t shooting the ball well and not making plays down the stretch,” Yuba head coach Doug Cornelius said.

Despite the loss, the 49ers were led by Brandon Recek with 16 points, Jacob Henry with 14 points and Cornell Greenwood with 12 points.

Yuba (21-4, 12-1) can clinch a co-conference championship on Wednesday when it hosts Mendocino.