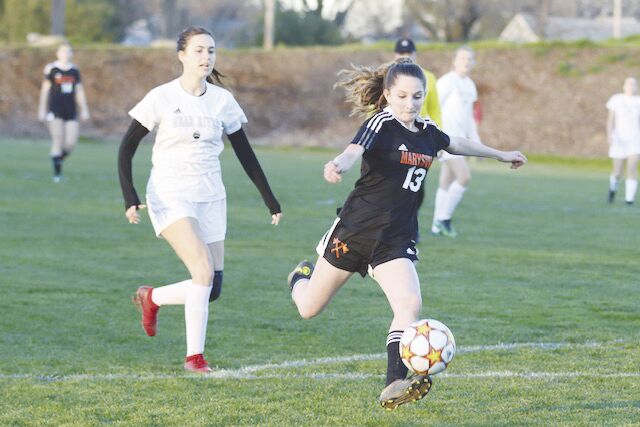 Marysville freshman Abella Morawcznski (13) unleashes a kick inside the goalie box Monday against Bear River. Marysville and Lindhurst kick off today in a doubleheader with the girls beginning at 4:30 p.m. at Marysville’s War Memorial Stadium. 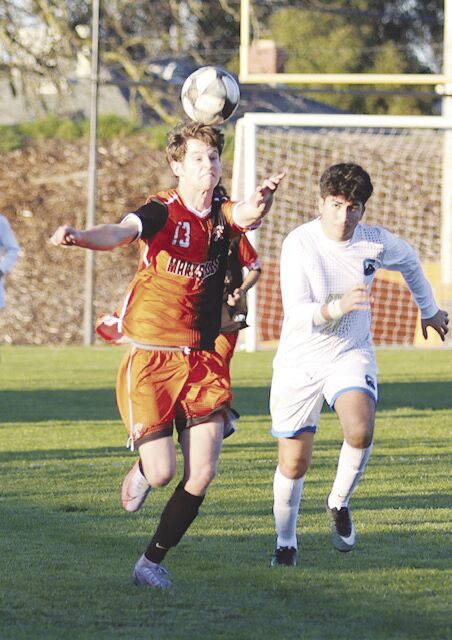 Marysville’s Jace Roper heads a ball Saturday during the team’s 2-1 loss at home to Center. The Indians bounced back with a 5-0 win over Bear River Monday.

Marysville freshman Abella Morawcznski (13) unleashes a kick inside the goalie box Monday against Bear River. Marysville and Lindhurst kick off today in a doubleheader with the girls beginning at 4:30 p.m. at Marysville’s War Memorial Stadium.

Marysville’s Jace Roper heads a ball Saturday during the team’s 2-1 loss at home to Center. The Indians bounced back with a 5-0 win over Bear River Monday.

During a time when many programs are shuffling weekly schedules around due to COVID-19-related issues, the Marysville High boys soccer team was able to get in a league game on Monday when it hosted Bear River of Grass Valley.

The Indians shutout the Bruins, 5-0, to run its overall record to 7-5 overall and 1-1 in the Pioneer Valley League.

Erik Gonzalez delivered a hat trick for Marysville, while Jace Roper and John Cherry each added a score.

Gonzalez also provided a pair of assists as Marysville equaled its league mark to 1-1. The Marysville girls fell to Bear River, 2-0, on Monday.

Marysville is scheduled to host rival Lindhurst today (Wednesday) beginning at 6:15 p.m. in the nightcap of a home doubleheader with the girls team that kicks off at 4:30 p.m. against the Blazers.

Marysville Athletic Director David Chiono, who has been dealing with multiple programs in quarantine the last few weeks, said schedules for the whole athletic program have been changing frequently due to the virus.

Girls basketball at home against Colfax Tuesday was canceled due to COVID-19 issues on Marysville’s side, Chiono said.

Chiono said the varsity boys basketball team, currently scheduled to host Colfax today (Wednesday), will only have one game this week as Friday’s game at Foothill (Sacramento) was postponed because of COVID-related issues within the Foothill program.

Marysville is far from the only program dealing with a local outbreak amid the mid-valley’s student-athletes.

Lindhurst was forced to postpone its boys and girls basketball games this week as well as a wrestling match on Thursday due to COVID health and safety protocols, Athletic Director Bob Jensen said.

“We have multiple members of boys and girls basketball quarantined for the remainder of the week,” Jensen said in a statement. “The wrestling coach is quarantined.”

All varsity games remain on track for now, Seaman said.

The varsity schedule, which continues today with two soccer games against Woodcreek and a wrestling match and girls basketball game against Inderkum, will be played as of now, McCaulley said.

At the collegiate level, Yuba College is also dealing with COVID postponements. A week after the California Community College Athletic Association (CCCAA) extended the regular basketball season by one week to allow extra time to make up missed games due to COVID protocol, Yuba College is still dealing with postponed games.

The 49ers home basketball men’s and women’s doubleheader against Contra Costa College Thursday has been postponed to a later date not yet disclosed, Yuba College Athletic Director Erick Burns said in a statement Tuesday.

Burns said both Yuba and Contra Costa are dealing with positive cases this week, preventing both schools from playing on Thursday.

The next scheduled game for Yuba is Saturday at Los Medanos in a road men’s and women’s doubleheader beginning at 1 p.m.

Both Yuba basketball teams have yet to play a game in 2022. The last game for the women was Dec. 22 while the men last played on Dec. 28.

Government’s role in our lives has …