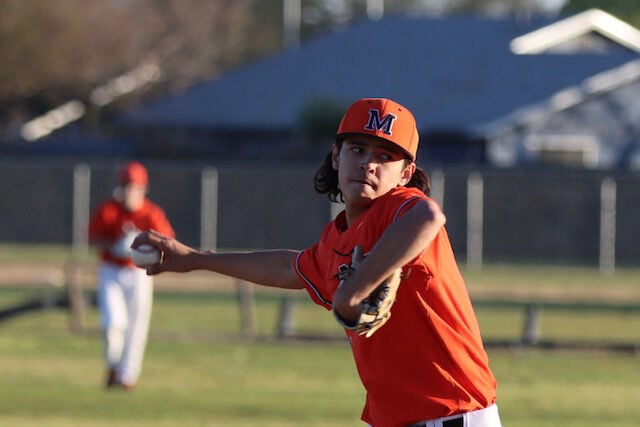 Marysville High pitcher Jaxon Finley and the top-seeded Indians open the SJS D-IV playoffs at home today against No. 8 Sierra. 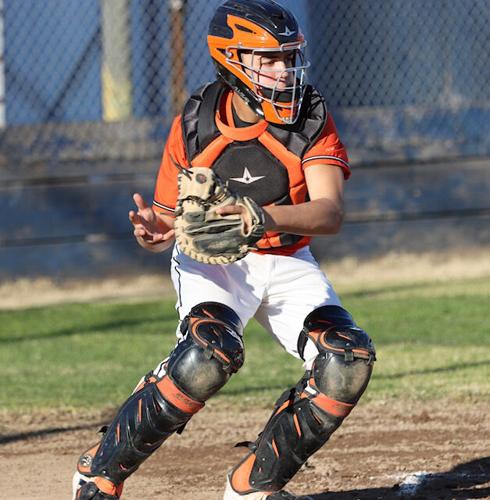 Marysville catcher Maddox Marino behind the plate for the 23-5 Indians, who open playoffs today at home at 4 p.m.

Marysville High pitcher Jaxon Finley and the top-seeded Indians open the SJS D-IV playoffs at home today against No. 8 Sierra.

Marysville catcher Maddox Marino behind the plate for the 23-5 Indians, who open playoffs today at home at 4 p.m.

The Marysville High baseball team is coming off its second straight, 20-plus win season, but this time the Indians will be in the postseason – a feat that has happened each year since 2015, according to head coach Bill Rollins.

The 2020 and 2021 season were cut short where playoffs were taken off the table due to the COVID-19 pandemic.

“The players are excited to be able to have playoffs this season,” Rollins said.

Marysville (23-5), the top-seed in the Sac-Joaquin Section Division IV bracket, kicks off its postseason run at home today (Thursday) against eighth-seeded Sierra (12-15). The Timberwolves got to this point with a 7-5 win over No. 9 Liberty Ranch on Tuesday.

For Marysville, co-champions of the Pioneer Valley League with Center, Thursday marks the first of three possible home games leading up to the SJS D-IV final played at either Sacramento City College and Islander’s Park May 24-27.

Locations and game times for the finals will be determined once facilities are secured and brackets are set, according to the SJS website.

If Marysville wins today, it will host game one of a best-two-out-three super regional series that starts May 16.

The winner gets to the finals to play for a D-IV title – a feat that Marysville has not claimed since 1983.

“I feel we had a great regular season, won our league and are deserving of a high seed,” Rollins said. “We were 23-5 and two of our losses were bottom of the seventh innings walk-off singles by our opponents, and another loss was in a game that went 10 innings.”

Two other mid-valley teams will also enter the postseason as the No. 1 seed in their division. Sutter Union High School, coached by Stewart Peterson, begins its two-day super regional run as the No. 1 seed in D-III of the Northern Section playoffs against No. 5 Gridley (19-9) Friday at 4 p.m. in Sutter (22-5-1). Sutter-Gridley is a game one match-up played at Sutter, while game two features No. 3 Wheatland (15-11-1) at No. 2 Lassen at 4 p.m. Friday in Susanville.

Then on May 17, it will be a three-game super regional double-elimination tournament held at Sutter because it is the No. 1 seed. Friday’s losers will meet in an elimination game at 10 a.m. Tuesday to kick off the three-game schedule at Sutter. The winners from Friday will square off in an undefeated match-up at 1 p.m. May 17. The final game of the day will feature the winner from the 10 a.m. game against the loser from 1 p.m. in an another elimination game at 4 p.m., with the winner advancing to the NSCIF D-III championship against the winner from the 1 p.m. game.

The championship is scheduled to be played May 21 at either Butte College or Shasta College, according to the NSCIF bracket.

Peterson said tickets for Friday and Tuesday can be purchased at the gate for $10 for general admission and $5 for students (with ASB) and seniors (60 and over).

Colusa No. 1 in Division IV

The RedHawks finished out the regular season at 28-0 and were the only undefeated team in the final NSCIF top-25 poll.

The top-seeded RedHawks will open postseason play against No. 8 Paradise (3-14) in a single-game set for 4 p.m. Friday in Colusa.

If Colusa wins it will host the winner of the four-five – featuring Willows and Pierce Friday in Willows – on Tuesday in another single-game set for 4 p.m. May 17 at the highest seed available.

The NSCIF D-IV finals are set for May 21 at Butte College or Shasta at a time to be announced later.

All tickets can be purchased by visiting https://gofan.co/app/school/CIFNS and searching for your designated school.

What natural beauty do you appreciate the most in the region?