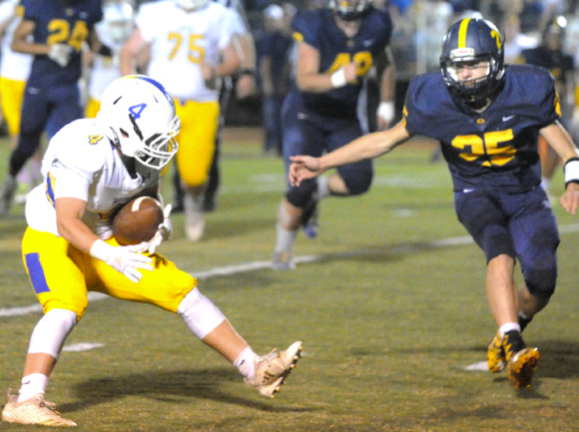 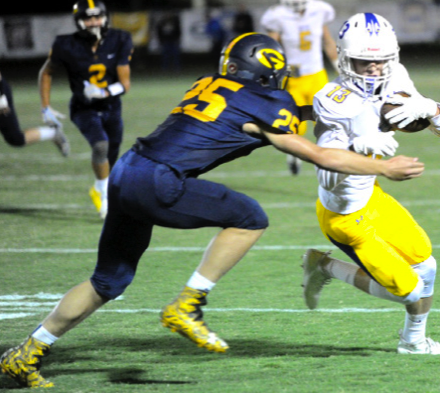 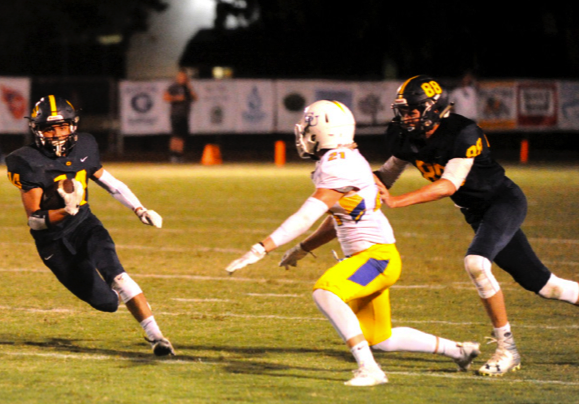 Gridley’s Javier Alejo finds an opening to run for nine yards against Sutter on Oct. 5 in Gridley.

Gridley’s Javier Alejo finds an opening to run for nine yards against Sutter on Oct. 5 in Gridley.

Tonight at Wayne Gadberry field, the Huskies and Bulldogs will battle it out for the top spot of the Butte View League.

In last year’s regular season game, Gridley kept it close until the third quarter when the Sutter offense broke through en route to a 35-20 victory.

The teams would face again in the playoffs on Nov. 24. This time, the Huskies proved their defense was even stronger than before as Sutter won by a final score of 24-0.

Tonight the Bulldogs will have another tough test. The Huskies defense hasn’t slowed down in the slightest. This season Sutter is averaging 12.4 points allowed per game, including a shutout against Chico on Sept. 20.

If the Bulldogs want to be successful, they’ll need to find a way to penetrate the Huskies defensive front. Looking to do that will be Gridley’s Arden Anderson. This season the junior back has rushed for 652 yards and six touchdowns. If the Bulldogs are going to seal a victory tonight, look for Anderson to have a huge night running the ball.

As for Sutter, the game plan should be more of the same. With the three-man running trio of Cory McIntyre, Daniel Cummings and Colton Dillabo, the Huskies will give the Bulldogs a lot to handle.

In last week’s 34-7 win over Enterprise, the three Huskies combined for 182 yards on the ground with three scores.

Fresh off its bye week, Yuba City returns to Honker Stadium tonight to cap a week full of homecoming celebrations with a home league game against winless Bella Vista.

Yuba City (3-3, 1-1 Capital Valley Conference) is seeking a win to try and keep pace with unbeaten Inderkum and 5-2 Roseville, who lead the conference in respective order. Yuba City is home against Roseville Oct. 18 and at Inderkum on Oct. 25.

The Honkers, like they have done all season, almost assuredly will rely on their defense, which has allowed just 101 points in six games (second best in the CVC). Two of the team’s defensive playmakers this year have been middle linebacker Luke Afato and safety Brigham Lessard. Both have scored touchdowns on the defensive side of the ball.

Offensively, senior running back Erik Palmquist looks to develop his dynamic capability with the ball in his hands, trying to stabilize the unit and give the defense some rest. Junior wide receiver Antonio Henry is perhaps Yuba City’s best pass catcher, as he’ll likely be a big target through the air from quarterback Mason Niccum.

The game is scheduled for 7:15 p.m. with a 15 -minute halftime break, officials say.

Fresh off an admirable rivalry win over Colusa last week, the Bears will hope to keep up their high-scoring offense tonight on the road against the Honkers.

This season the Pierce offense is averaging over 35 points per game making them a true threat for any opposing defense. Much of this success is due to the play of Aiden Charter. In last week’s win, Charter carried the rock eight times for 155 yards and two touchdowns. The Willows defense will need to have done its homework on stopping the run if its going to have a solid outing.

One player to watch for on the Honkers’ defense will be Jack Sites. Through three games this season, the senior defensive lineman has six tackles and one fumble recovery.

Kickoff is set for an early

Tonight the Panthers will hope to regroup and bounce back after a tough 54-20 loss last week to Portola.

Looking to stop Hendrix on the other side of the ball is Modoc’s Wesley Gray, who has already recorded an interception in just one game of varsity play.

After what may have been their toughest test of the season last week, the Eagles will hope to keep their undefeated campaign alive tonight when they hit the road to face a .500 squad in the Raiders.

Princeton’s offense has been the story of the season, as the Eagles are currently averaging over 28 points per game.

Seniors Rigoberto Davila and Joey Wills have led the eight-man squad on both offense and defense this year. If both can have an impactful night, the Eagles should be able to secure their sixth victory of the season.

On the other sideline will be Burney’s Langston Tate, who leads the Raiders with 556 yards and seven touchdowns. If Tate gets the right blocking, the Eagles defense could have a long night.

Last week’s 10th straight Battle of the Bell loss is something the Blazers will hope to build off of when they host a fierce opponent in the Bruins tonight.

One player that Lindhurst’s offense will need to watch out for is Bear River’s Zachery Fink. The senior defensive lineman has proven he can be a one-man wrecking crew. In the Bruins’ 21-7 win over Truckee, Fink tallied six tackles and two sacks.

Hoping to evade the pressure of the Bruins tonight will be Lindhurst’s Simon Enochs. The sophomore back leads the Blazers with 332 yards and four touchdowns this season.

Kickoff is set for 7 p.m in Olivehurst.

This season has been anything but fun for the Las Plumas Thunderbirds. Don’t expect that to change tonight when it faces a tough running attack in Tariq Parker and the Wheatland Pirates.

Through just five games this season, Parker has 931 rushing yards and eight touchdowns. Not to mention his 84 receiving yards.

Las Plumas will have its hands full, but one player the Thunderbirds will look to tonight will be senior Carlos Lopez. The 6-foot-5 tight end/defensive end has proven he can foil game plans. If the Thunderbirds want to keep things competitive tonight they’ll need to find an answer for Parker and Lopez could help in that area.

Kickoff is set for 7 p.m. in Oroville.

It’s been “so far so good” for Williams’ first year head coach Jeff Lemus. He’s led the Yellowjackets to a 3-2 record with notable wins against Live Oak, 18-6 and Durham, 52-21. Tonight should be a routine win for his squad when it faces a struggling Mt. Shasta.

The 2019 ‘Jackets have been led by quarterback Guillermo Hernandez. The senior has tallied 1,039 passing yard, 10 touchdowns and posted an impressive 97.7 passer rating.

Hoping to slow down Hernandez and his offense will be the Bear’s Lane Kindley. The team captain has led Mt. Shasta this season with eight tackles in his role as a defensive lineman.

In last week’s loss against Roseville, co-head coach Brennan McFadden said that he couldn’t have been prouder of the way his team played and they’ll be ready to go against top-ranked Inderkum.

While they haven’t won a game since Aug. 30, one thing’s for sure, the Falcons have gotten increasingly better as a team.

One player that’s really stepped up for River Valley as of late is running back George Baker. The sophomore made a name for himself last week when he opened up the second half with a 75-yard touchdown reception out of the backfield.

On the other sideline is a loaded Inderkum team with impactful running backs like Dino Watson, Aaron Espero, Willie Hardy Jr. and Josiah Tyes. The quadruple threat has a combined 1,338 yards and 21 touchdowns. It’s practically the team’s entire offense. The River Valley defense will have its work cut out.

Fresh off a solid win in the 47th Battle of the Bell, the Indians will have to turnaround and get right back to work versus a tough four-win team in the Falcons.

Leading the way for the Indians as of late has been Jerriah Mcbath. In last week’s game, Mcbath rushed for 338 yards and three touchdowns, proving he can provide a spark to the Indians’ offense at any given moment.

One player to watch for on Colfax will be running back John Beckman. During his senior campaign, Beckman has racked up 203 rushing yards to go along with his four scores. If the Indians want to limit the Falcons scoring, stopping Beckman will be a key.

Riley Stice and the RedHawks will look to get back in the win column tonight when they make the trip over to Durham for a showdown with the 2018 runner-up section champions.

This season Stice has thrown for 709 yards and eight touchdowns to equate for a 130 quarterback rating.

Meanwhile, the Trojans will look to defensive teammates Jacob Christensen and Dillon Bunch. The Durham duo has made their impact on the field this season with a combined 67 tackles, three fumble recoveries and four sacks. If Stice and company want to have a successful night of advancing the football they’ll need to keep an eye on Christensen and Bunch.

After its week one loss to Paradise, East Nicolaus has gone on to win four straight games. Tonight when it travels to Trinity, I wouldn’t expect much to change. Especially given the fact that the Spartans will face a win-lees team in the Wolves.

In last season’s contest, East Nicolaus rumbled to a 57-0 win over Trinity after scoring 49 points in the first half.

Tonight the Spartans trio of J.T. Stinson, Mitch Barker and Gavin McAuliff will look to put on the same show. Through five games, the trio has a combined 1,087 yards and 11 touchdowns.

One player to watch for on the Wolves will be senior Scotty Rupp. In four games the wide out has tallied 157 yards and one touchdown.

Having already notched more thing than last season’s total (3-7), the Lions enter tonight’s contest with a back-to-back wins against Willows and Winters.

Making an impact for Live Oak lately has been running back Odin Moody. In his last two games, Moody has a combined 440 yards and six touchdowns. If Esparto wants to put itself within reach of a win tonight it’ll need to find and answer for Live Oak’s ground game.

Leading the Spartans defense this season has been Issac Lawrence, who through just four gamed has managed to record 40 tackles, four sacks and one fumble recovery.

The Tigers and Trojans will face-off tonight with one thing on their mind: getting back up to a .500 record.

After last week’s brutal 57-0 defeat to Paradise, Oroville hope to manage a better game in all aspects tonight. With an offense that’s normally fairly potent, the Tigers hope to get back to their scoring ways tonight.

One player that’s stepped up for the Oroville offense this season is Trent Dasilva. The senior wideout has tallied 164 receiving yards and one touchdown through four games.

Meanwhile on the other side of the ball is Orland’s Hunter Foster. The senior defensive back has two interceptions this year. Look for Dasilva and Foster to be a fun match-up tonight.

After Lassen ended the Cardinals four-game win streak last week, Corning hopes to get right back in the win column when it hosts the two-win Miners tonight.

In last year’s game against Yreka, Corning put up 20 points in the second half en route to a 34-0 victory.

Look for them to do the same tonight behind the attack of running back Devin Toth, who currently leads the team with 376 yards and two touchdowns.

Meanwhile, the Miners will try to weather the storm with wide receiver Devon Applewhite. This season the junior has tallied 343 receiving yards on 26 receptions.