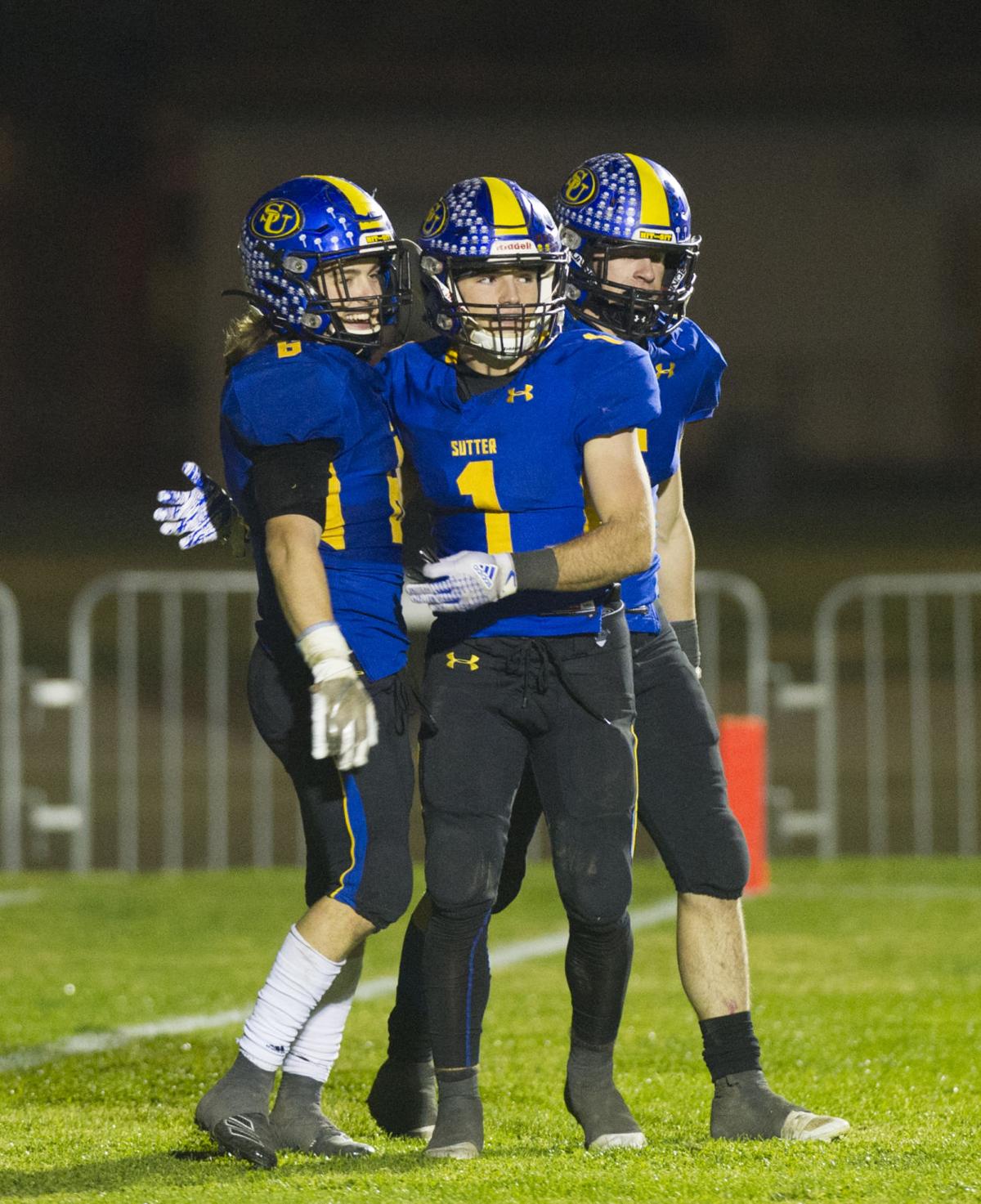 Sutter High teammates celebrate a touchdown during a game against University Prep on Friday at Wayne Gadberry Field in Sutter. 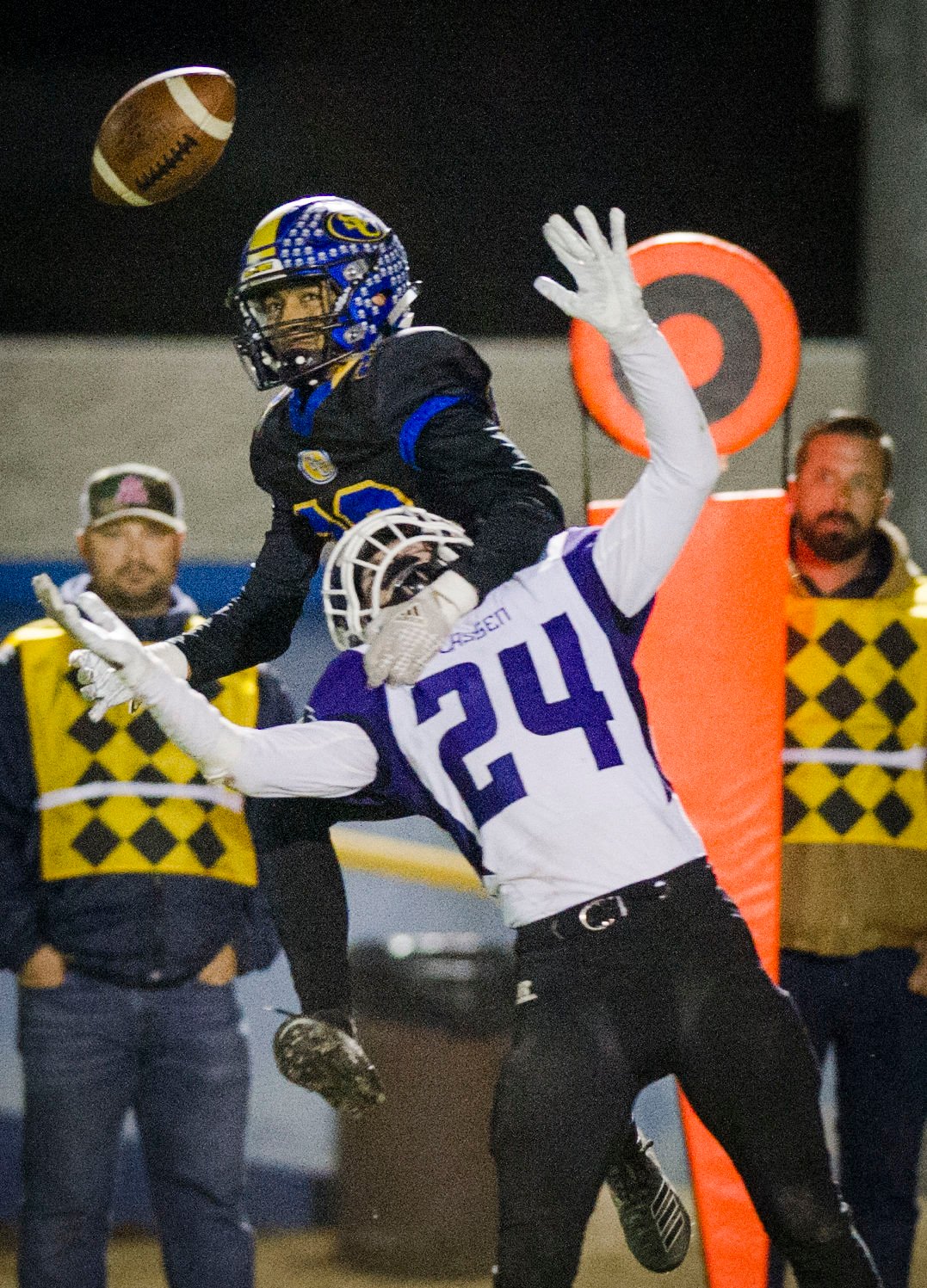 Sutter High's Roman Resendez knocks the ball away from Lassen's Aaron Ogburn during a game on Friday at Wayne Gadberry Stadium in Sutter.

Sutter High teammates celebrate a touchdown during a game against University Prep on Friday at Wayne Gadberry Field in Sutter.

Sutter High's Roman Resendez knocks the ball away from Lassen's Aaron Ogburn during a game on Friday at Wayne Gadberry Stadium in Sutter.

As word started to spread on the Huskies sideline that No. 4 Paradise was leading No. 2 West Valley, the Sutter fans began to smile a little wider – knowing they would be able to host a section title game instead of traveling the weekend right after Thanksgiving.

With high attendance and precipitation both forecasted, the Sutter coaching staff and athletic administrators decided to change the location of the game. The Huskies will now welcome the Bobcats to nearby River Valley High School in Yuba City.

“We’re anticipating a pretty good-sized crowd and we can’t really meet those needs with our own facilities. Also with rain coming into play it’ll be nice for both teams to play on turf,” head coach Ryan Reynolds said.

As if both teams weren’t going to run the ball already, the weather will definitely cement that aspect of this game.

The Huskies have been led by senior all-purpose player Cory McIntyre, who’s rushed for 1,093 yards on 120 carries with 12 touchdowns. Other notable rushing performances for the Huskies have come from Colton Dillabo and Daniel Cummings, who have combined for 987 rushing yards and 10 touchdowns.

“It’s been such a blessing to be able to have all of these guys to call on,” Reynolds said. “Each and every player on this team can bring a certain level of skill that really makes us dangerous for all four quarters,” he added.

On the other sideline is perhaps one of the most elusive running backs in the Northern Section – Tyler Harrison.

The stand-out sophomore has rushed for 2,387 yards, (including three 300-plus yard games vs. Willows, Red Bluff and Live Oak) and 29 touchdowns on 164 carries.

“Our defense is used to facing an experienced back field so I think they’ll definitely be prepared  come game time,” Reynolds said.

Harrison isn’t alone with his impressive rushing stats; Lukas Harley has rushed for over 1,300 yards this season on 151 carries and 20 scores. Both teams have strong running attacks but I’d have to give Paradise the edge in terms of advancing the ball with your feet.

As for each team’s defense, I’d give that edge to the Huskies. Sutter’s defense has held the Huskies down all season – posting four shutouts and holding opponents to just 6.75 points per game.

The Huskies have been led by Mario Ayotte with 135 tackles (28 of which were for a loss) and Kyle Watson with 121 tackles.

In the secondary, the Huskies have been led by Roman Resendez, who’s tallied two interceptions and 23 passes defended.

The Paradise defense isn’t that much different, holding opponents to 7.16 points per game. The most points the Bobcats surrendered all season came on Aug. 30 when East Nicolaus was able to put 28 on the board vs. Paradise.