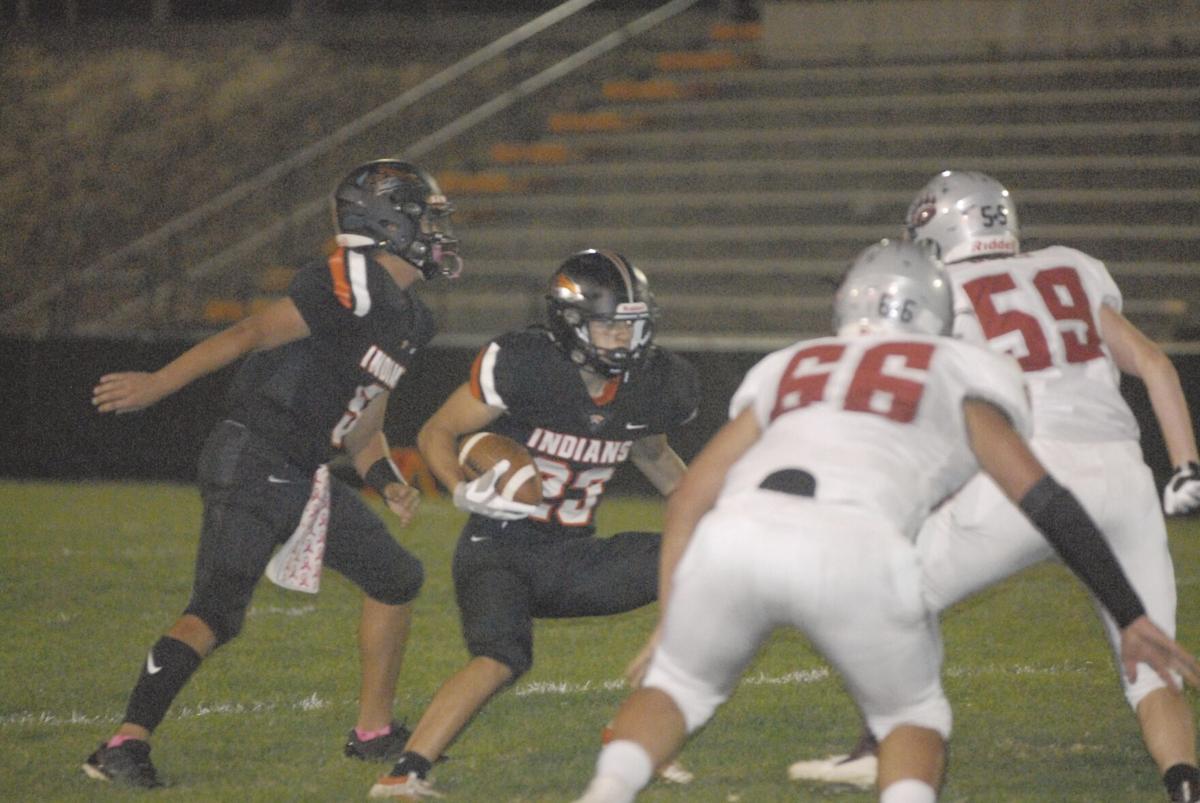 Marysville running back Elijah Marin tries to get around a pair of Bear River defenders Friday night during the Indians’ homecoming at War Memorial Stadium. 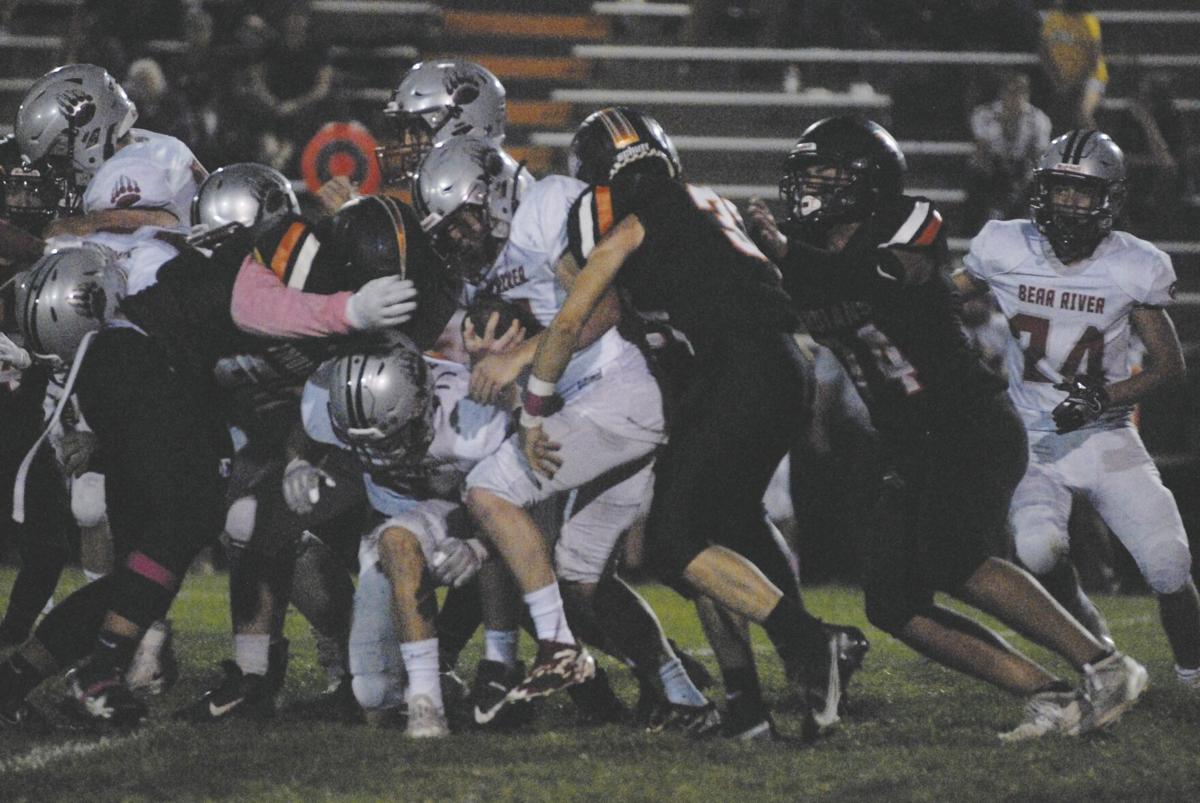 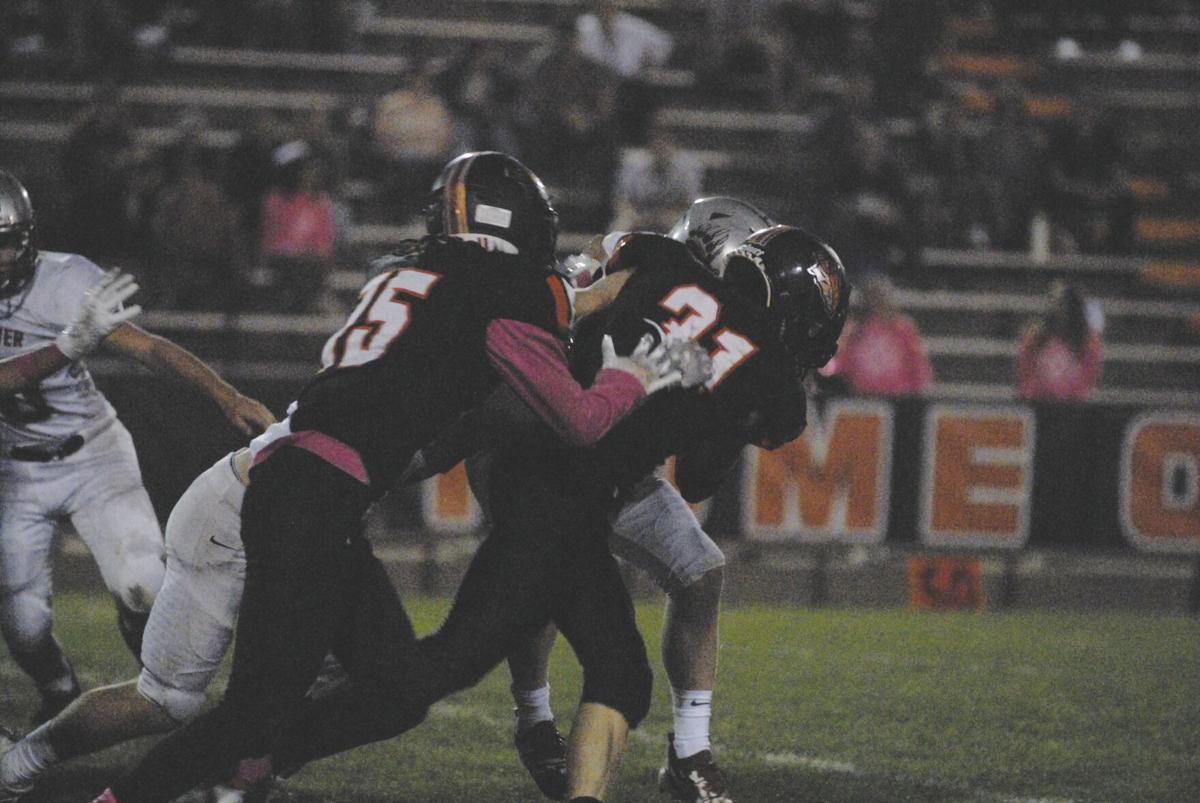 Marysville running back Elijah Marin tries to get around a pair of Bear River defenders Friday night during the Indians’ homecoming at War Memorial Stadium.

It was a slow start for both teams Friday night when the Marysville High football team hosted Bear River to begin Pioneer Valley League play at War Memorial Stadium.

The Indians were stopped most of the opening half by penalties and a Bear River run-heavy attack that seemingly controlled the clock and momentum over Marysville.

Still, the Indians led at halftime and battled all the way until the last few seconds before falling short to Bear River, 14-13, on a failed two-point conversion in the final few seconds.

Marysville drove the field in about 1 minute, 35 seconds, helped in part by a 50-yard completion from Thomas. Hinojosa to Trishton Henderson, and scored on a Kris Bridgers’ 3-yard touchdown reception from Hinojosa, cutting the deficit to 14-13 pending the extra point.

Marysville head coach Jordan Holmes elected to go for two and the win, but the pass attempt failed.

“You play to win the game and we had a shot,” Holmes said.

Holmes said Marysville answered the call from the coaches following a lackluster first half filled with a number of penalties on both sides.

Marysville (4-2, 0-1 PVL) got on the board first when Hinojosa found Landin Parks on a 20-yard scoring toss over the middle, allowing Parks to cruise into the end zone for a 7-0 lead. The score was helped by a Bear River holding penalty to get the hosts into primetime scoring position.

Penalties would be the theme of the second quarter. Marysville had a drive stall due to a pair of penalties – one on each side – that effectively reversed an Indian first down courtesy of a pass interference flag on Bear River.

But Marysville was called for a dead ball unsportsmanlike conduct penalty, which offset the other penalty and put the ball nearly back to the original line of scrimmage.

Bear River (1-3, 1-0), on perhaps the most impressive drive of the first half, played itself out of the red zone due to a holding penalty and ineligible receiver downfield.

The Bruins would eventually strike the end zone when Ryder Kiggins pounded in from short yardage early in the second quarter – a drive aided when Marysville committed a penalty on the punt to give Bear River possession at the Indian 48-yard line.

Marysville travels to Olivehurst to take on Lindhurst in the Battle of the Bell this week.

Quarterback Shay Carr rushed it 11 times for 124 yards and two touchdowns to lead Gridley to the commanding win.

On defense, Diego Romo had an interception.

Up next for Gridley is Sutter on the road on Friday.

Live Oak is at Pierce this week.

The Huskies extended their Butte View League winning streak to 27 games following a 28-14 win over Wheatland on the road Friday.

Nic Fisher scored the final Sutter touchdown to push the margin back to double digits over Wheatland (1-5, 1-1 BVL) in the fourth quarter.

Sutter (4-1, 2-0) jumped out to a 20-7 lead in the third before Wheatland answered again on a Trystan Rymer rushing score in the third. Lillyan Diaz with the PAT cut the deficit to 20-14 to close out the third quarter

Despite two kick returns for touchdowns, Yuba City still fell at Chico in a nonleague battle up north.

The Bears bested East Nicolaus for the second time this calendar year, 7-6 on Friday night.

Following a Spartan fumble return for a touchdown, Pierce (4-2, 2-0 Sac Valley League) equalized with a Manuel Lopez 4-yard touchdown run, cutting the deficit to one.

Iain Kalfsbeek set up the touchdown with a 23-yard run.

Pierce went up with the PAT, then shutout East Nic the rest of the way.

Quarterback Emanuel Frias scored three rushing touchdowns and passed for a couple more to lead the RedHawks to the win.