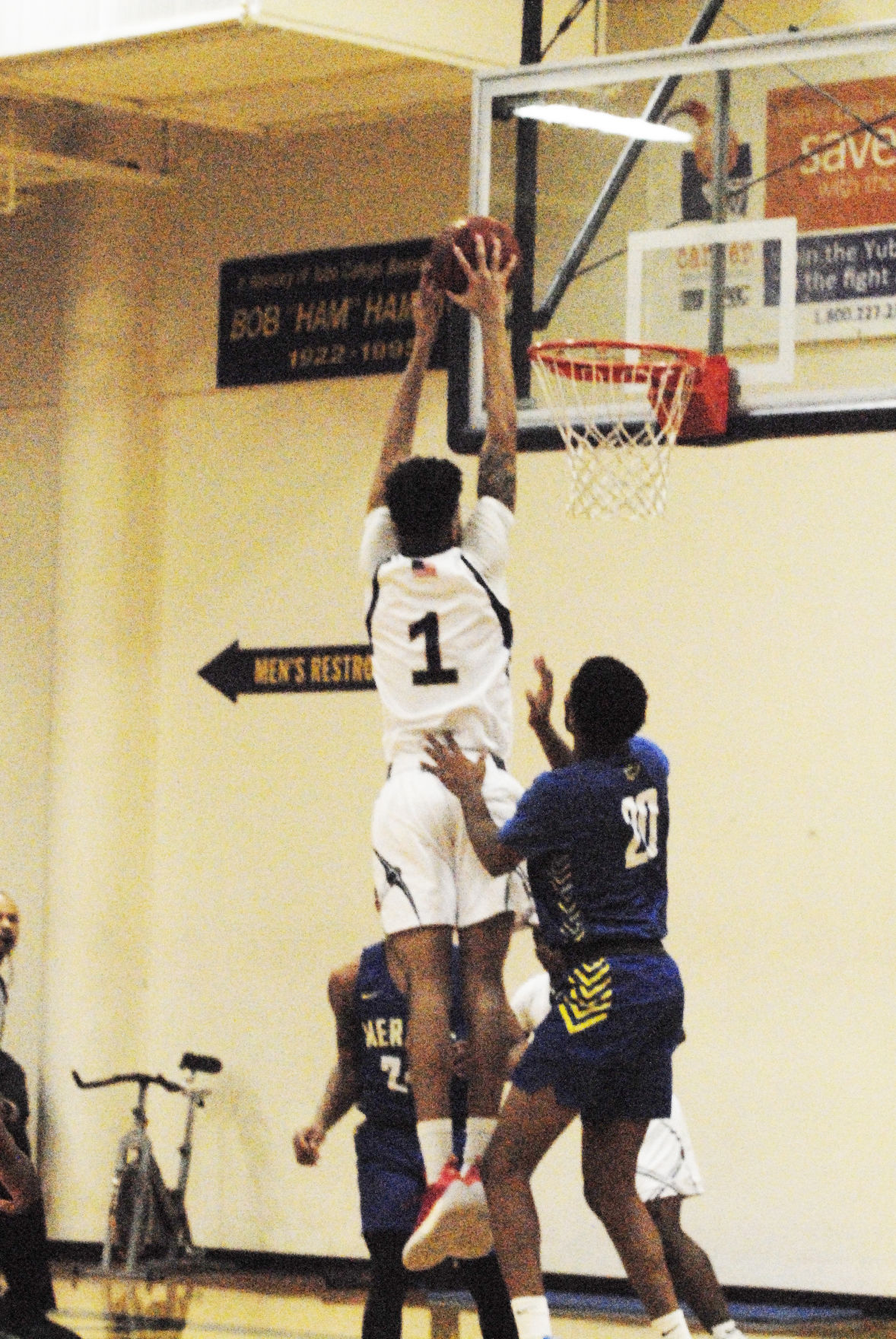 Yuba’s Brandon Recek (1) slams a dunk in the opening moments of the second half of Friday’s game against Merritt College at the Yuba College gym in Linda. 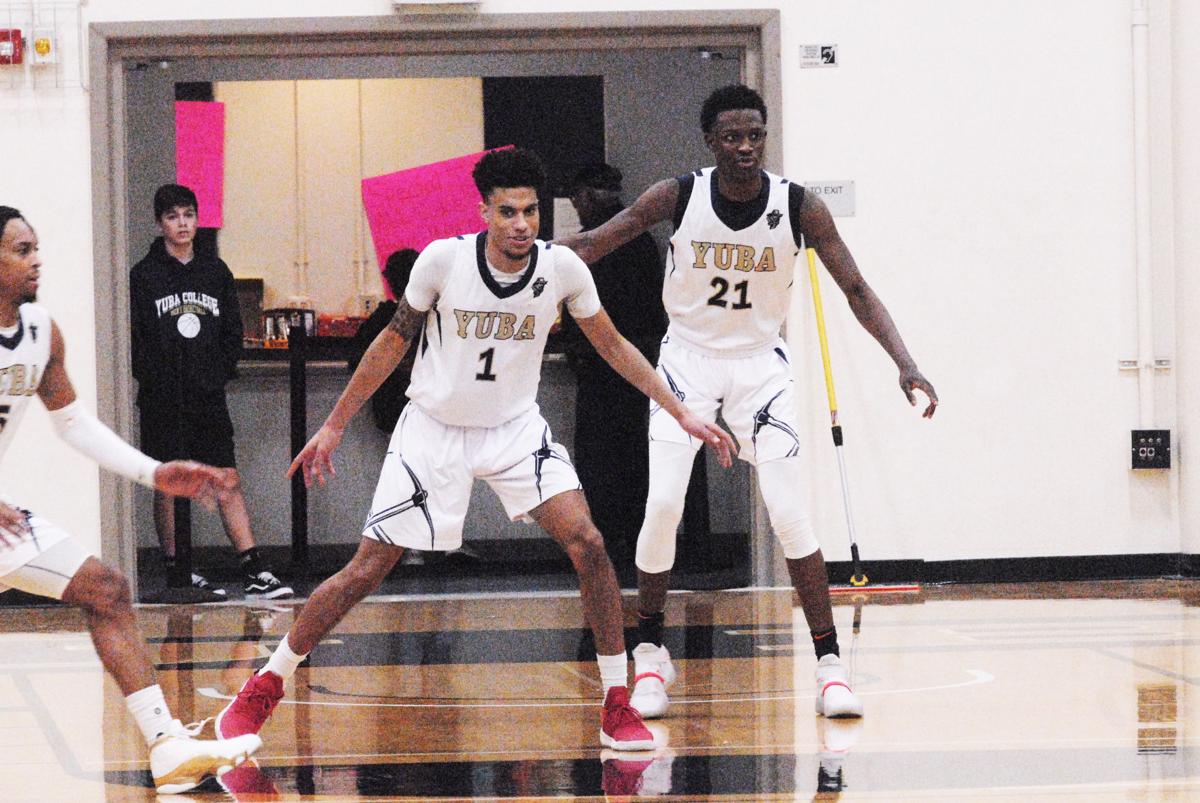 Yuba’s Brandon Recek (1) and Chris Aibuedefe (21) focus on their team defense during the second half of Friday’s game against Merritt College at the Yuba College gym in Linda. 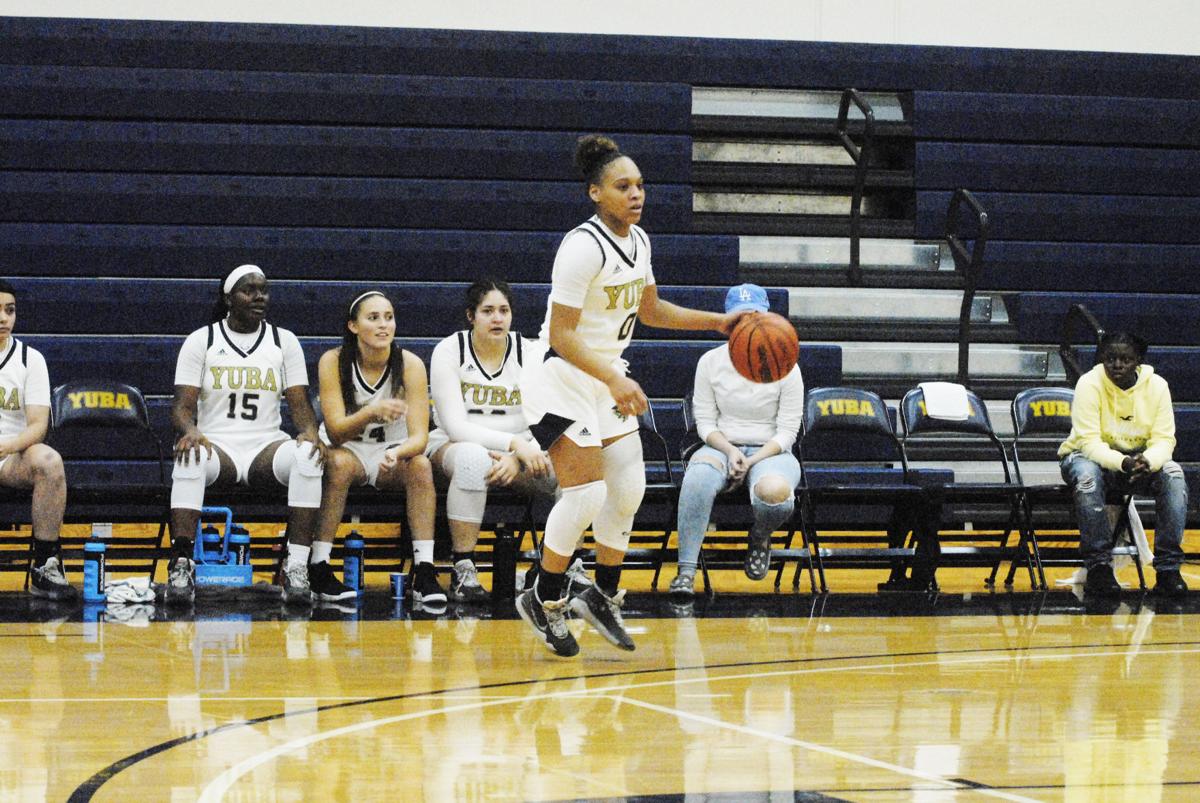 Yuba's Lailani Hanks dribbles down court during a game on Friday night against Merritt College at the Yuba College gym in Linda. 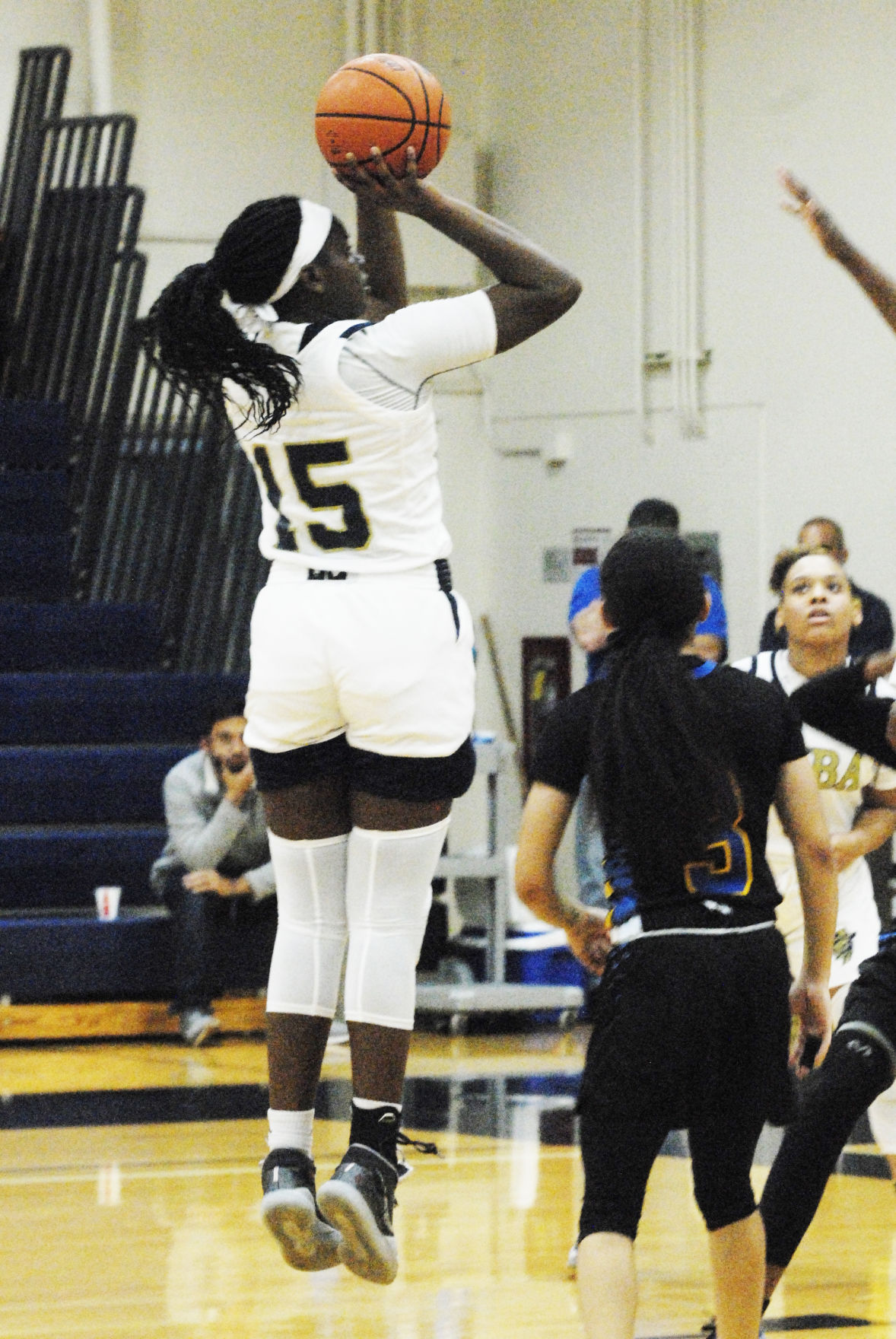 Yuba’s Raenette McCrae takes a mid-range shot during Friday’s game against Merritt College at the Yuba College gym in Linda. McCrae finished the night going a perfect 6-for-6 from the free-throw line.

Yuba’s Brandon Recek (1) slams a dunk in the opening moments of the second half of Friday’s game against Merritt College at the Yuba College gym in Linda.

Yuba’s Brandon Recek (1) and Chris Aibuedefe (21) focus on their team defense during the second half of Friday’s game against Merritt College at the Yuba College gym in Linda.

Yuba's Lailani Hanks dribbles down court during a game on Friday night against Merritt College at the Yuba College gym in Linda.

Yuba’s Raenette McCrae takes a mid-range shot during Friday’s game against Merritt College at the Yuba College gym in Linda. McCrae finished the night going a perfect 6-for-6 from the free-throw line.

Both the men’s and women’s Yuba College basketball teams secured home victories on Friday night in Linda. With the home-sweep, both squads will look to start heating up down the stretch this month in conference play.

With its winning streak on the line, Yuba College flipped the switch at halftime in Linda on Friday night. The 49ers held Merritt College to just 11 second -half points, while putting up 61 second-half points of their own en route to a 91-40 win over the Thunderbirds.

“We switched from playing man to a trap and I think that really gave them complications,” Yuba head coach Doug Cornelius said. “We were also able to get some dunks and make some big shots which really generated a lot of energy in the gym with the fans,” he added.

Up by just one point coming out of the halftime break, Yuba’s Brandon Recek started off the second period with a monstrous dunk for the 49ers.

The dunk-fest was just getting started.

Jacob Henry was key in lobbing up a few alley-oops for his teammates. First to Patrick Lambey, who hammered a one-handed slam that put Yuba up 51-37 with 10:36 left.

“That’s the kind of stuff we work on in practice or just regular shooting sessions,” Henry said. “It’s pretty cool to have that kind of chemistry during a game,” he added.

Henry wasn’t done yet. The next beneficent of Henry’s unselfish play was Jordan Bryant. After Henry snagged a steal he drove to the basket only to toss the ball off the backboard hard enough for Bryant – trailing behind – to throw it down.

“I was hoping he saw him coming behind and sure enough he did, what a play,” Cornelius said.

Though there was a lot to celebrate in the second half, the injury bug still has yet to leave the Yuba College gym. Both Cornell Greenwood and Joesph De’laCerda left the game with lower-body injuries.

“It’s tough, it feels like just as we get someone back we lose another. We’ll evaluate them and go from there,” Cornelius said. “I do have to say the true MVP of this season is probably our training staff,” he added.

Recek finished the night with a team-high 20 points. Other notable stand-outs for the 49ers included Henry with 15 points and Bryant with 10 points.

After an impactful win for outright second place in conference, the 49ers women returned home to host first place Merritt College. The task was not too big as Yuba weathered the storm to defeat the Thunderbirds by a final score of 61-54.

“This whole entire week was huge for us, it’s the first time in 10 years we’ve beat Solano and then now we take out first-place, undefeated-in-league Merritt. Just wow. We’re just really locked in and trying to turn that corner,” Yuba College head coach Stuart Welch said.

The first quarter showed that both teams were a little rusty. After Yuba jumped out to 7-3 lead with just 4:11 left, Merritt showed its relentless physical play.

With seconds remaining in the first period the Thunderbirds hit a mid-range buzzer-beater to cut the margin to 12-11 in favor of the 49ers. Welch knew his team needed a kick start.

Yuba would score 15 points in the second quarter to take a 27-23 lead heading into the break.

“We worked hard for this. Coach (Welch) holds us to a high standard and I think that’s why we respond so well to his motivation and coaching in general,” Yuba’s Nia Williams said.

The second half is where the 49ers would really start to show their fight to win.

Down by just a few points towards the end of the third quarter, Merritt was starting to play even more physical. Yuba would call a time-out to settle down.

“I just kept telling them to regain their focus and play Yuba basketball. It can be hard when you play a team that’s pretty tough, but you have to stick to what you know,” Welch said.

In the waning moments of the third quarter, Williams hit a buzzer-beater 3-point shot to make the score 40-36 heading into the final period.

That’s when the Niners would ride out some more hot shooting. With just 8:22 left in regulation it was raining threes. First from Lailani Hanks and then from Gloria Leon-Campos. All of a sudden Yuba found itself up 46-36.

“I hadn’t been shooting the ball that well all night so for that to go in it was sort of instilling more confidence in me as well as my team,” Leon-Campos said. “From there we just had to lock things down and beat their press,” she added.

After some clutch free-throw shooting the 49ers went on to take the game by a final score of 61-54.

“We’re in a good spot. One thing I would like to see us work on is turning the ball over, we have to be smarter with our possessions in that sense, but we’ll keep building off of these nice wins heading into the end of league-play,” Welch said.

The 49ers were led by Williams with 17 points, Leon-Campos with 11 points and Hanks with 10 points.

Yuba (15-7, 8-2) will travel to face the College of Marin on Wednesday in Kentfield.