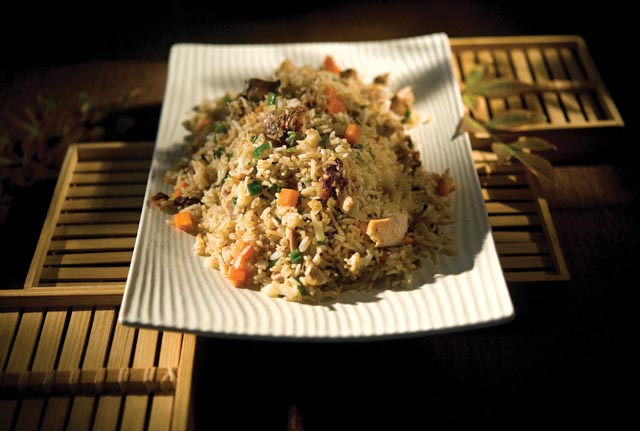 Onions and carrots are stir-fried in a hot wok to make Chinese Jamaican Jerk Chicken Fried Rice. This recipe can be found in Chinese cooking expert Grace Young's latest book, "Stir-Frying to the Sky's Edge." 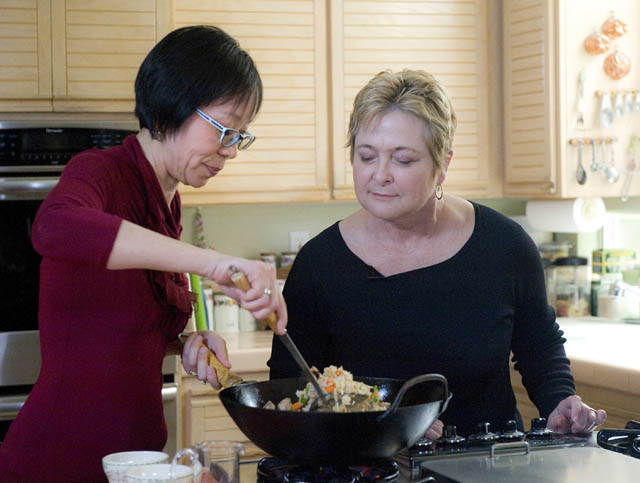 Onions and carrots are stir-fried in a hot wok to make Chinese Jamaican Jerk Chicken Fried Rice. This recipe can be found in Chinese cooking expert Grace Young's latest book, "Stir-Frying to the Sky's Edge."

Grace Young and I joke about being sisters separated at birth.

The award-winning author and I share the same maiden name, Young, plus a passion for great cooking and laughter. Oh, and an over-the-edge adoration of our pets.

Our link has nothing to do with common bloodlines, and I suspect her ancestors were better cooks than mine.

Much of her newest book, "Stir-Frying to the Sky's Edge" (Simon & Schuster, $35), is the story of Chinese immigrants and their ability to create modified stir-fried dishes around the globe. In researching the book, she interviewed Chinese families that immigrated to Peru, Trinidad, New Zealand, Fiji, Indonesia, Jamaica, Libya, Holland, India, South Africa, Burma and Germany, as well as America.

Young joined me in my kitchen recently to show me how to make fried rice — Chinese Jamaican Jerk Chicken Fried Rice. Jerk is a delectable Jamaican cooking method in which the meat is dry-rubbed or wet marinated with an alluring spicy mixture before cooking.

I told her that before reading her book, I hadn't realized that the Chinese had immigrated to such disparate countries. For instance, I had never associated Jamaica with Chinese cuisine.

She explained that the 1882 Chinese Exclusion Act (withdrawn in 1943) forbade Chinese immigration to the U.S., and that was part of the reason that so many Chinese immigrants settled around the world: Southeast Asia, Africa and Central America, Europe, South America and the Caribbean.

And wherever the Chinese immigrants settled, they stir-fried.

"The common theme of all the stories and recipes in the book is the transformation of humble ingredients into rich, delectable, healthful meals using precious little food and cooking fuel," she said.

"Stir-frying has been a continuous comfort to the Chinese diaspora; there's not another cooking technique that tells such a human story."

Asian ingredients were often hard to come by in the immigrants' new homelands. No ginger. No soy sauce. No Asian vegetables. No woks.

Before Asian ingredients were commonplace, they made substitutions using local produce and cooking vessels. Cauliflower stems instead of Chinese broccoli. English pea pods (with their inner membranes removed) instead of snow peas. Potatoes instead of lotus root. Turnip greens and salt pork instead of bok choy, peanut oil and marinated pork.

"Even without Chinese condiments like soy sauce, a stir-fry could be made in the skillet or a pot," she said. "Stir-fries were stripped bare using local vegetables stir-fried with a little garlic or onion."

But there was nothing stripped bare about the Chinese Jamaican Jerk Chicken that she stir-fried in my kitchen. The rich flavors of sweet-sour-spicy dark-meat chicken melded perfectly with the kernels of nutty rice and tender-crisp diced vegetables.

Young lives in New York City and tasted the dish in a Chinese Jamaican restaurant.

"Jerk chicken fried rice caters to the tastes of Jamaican customers, just as chop suey appealed to Americans," she said. "I am told it is also served in Chinese Jamaican restaurants in Toronto, Canada, and in a Chinese Guyanese restaurant in England."

Sounds like stir-frying to the sky's edge, right? I asked Young about the exquisite imagery in her book's title.

"There is an old Cantonese expression, 'one wok runs to the sky's edge,' meaning one who uses the wok becomes master of the cooking world," she said. "But there have been so many interpretations. It seems to mean something different to everyone. My interpretation is that the Chinese ended up in such unusual countries, as far away from China as the sky's edge."

She said that writing this stir-fry book taught her what it means to be Chinese. After reading her words, I know she is the poet laureate of stir-fry.

Serves: Three as a main course, four as part of a multi-course meal

1 teaspoon plus 2 tablespoons peanut oil or vegetable oil, divided use

In a mini food processor, combine 1 cup green onions and garlic; pulse until just combined. Add ketchup, lime juice, vinegar; process one minute, pausing once to scrape down the sides of the bowl, or until mixture is almost smooth. Add 1 tablespoon of soy sauce, thyme, allspice, sugar, 1 teaspoon dark soy sauce, 1 teaspoon of oil, 1 teaspoon salt, cinnamon, pepper, red pepper flakes and cayenne. Pulse until well combined to make about 1⁄2 cup. Put 1⁄4 cup in a covered container and refrigerate; use within one week or freeze up to two months.

Make several 1-inch slits on both sides of the chicken legs. Put chicken legs in a large, shallow bowl and pour on the reserved 1⁄4 cup jerk marinade, making sure the marinade reaches under the skin and coats the chicken. Cover and refrigerate for two hours or overnight. Thirty minutes before roasting, remove the marinated chicken from the refrigerator.

Preheat oven to 425 degrees. Put the chicken skin-side up in a roasting pan lined with aluminum foil. Roast 30 minutes or until chicken is golden brown and a meat thermometer registers 170 degrees not touching the bone. Transfer chicken to a cutting board, reserving the pan drippings. If desired, skim any surface fat from the pan drippings. Allow the roasted chicken to rest 10 minutes before cutting it into bite-size pieces to make about 2-1⁄2 cups. Discard the bones. In a small bowl, combine the remaining 1 tablespoon soy sauce and 1 tablespoon dark soy sauce.

Heat a 14-inch flat-bottomed wok over high heat until a bead of water vaporizes within one to two seconds of contact. Swirl in the remaining 2 tablespoons oil; add onion and carrots, then using a metal spatula, stir-fry 30 seconds or until the onions begin to wilt. Add the rice and stir-fry two minutes, breaking up the rice with the spatula until it is heated through. Swirl in the soy sauce mixture and stir-fry one minute or until all the rice grains are evenly colored with the soy sauce. Stir in the remaining 1⁄2 cup green onions, 1⁄4 teaspoon salt, pan drippings and chicken; stir-fry 10 seconds or until just combined.

Yield: Makes about 4 cups, serves four as part of a multi-course meal

Put the rice in a 1-1⁄2-quart heavy saucepan. Wash the rice in several changes of cold water until the water runs clear. Drain. Level the rice in the pan and add enough cold water to cover by 1 inch, or add 1-2⁄3 cups water. Bring to boil, uncovered, over high heat. When the water comes to a boil, reduce the heat to medium-low and simmer, uncovered, until most of the water has evaporated and little craters appear on the surface, about four to five minutes. Reduce the heat to low, cover and simmer 10 minutes or until all of the water is absorbed. Turn off heat and let sit five minutes before serving.

Grace Young wrote that this dish for stir-fried cabbage is from Tane Ong Chan, who remembers her mother making this dish in Albuquerque, N.M., when she was growing up in the 1940s. She said that this very simple stir-fry is typical of what Chinese immigrants cooked when living outside of Chinese American communities in America.

Yield: Four servings as a side dish

1 to 2 tablespoons vegetable oil or peanut oil, if needed

Add the garlic and stir-fry 10 seconds or until garlic is fragrant. Add the cabbage and stir-fry two minutes or until the cabbage just begins to wilt. If mixture is dry, add one to two tablespoons oil. Swirl in broth, cover wok and cook 30 seconds. Uncover, add soy sauce, sprinkle on the salt and pepper and stir-fry one minute or until cabbage is crisp-tender.

Yield: Four servings as a vegetable side dish

Trim 1⁄4 inch from the bottom of each head of bok choy. Separate the bok choy into stalks. Cut the stalks and leaves into 1-inch pieces to make about 8 cups. In a small bowl, combine broth, rice wine, soy sauce and cornstarch.

Heat a 14-inch flat-bottomed wok or 12-inch skillet over high heat until a bead of water vaporizes within one to two seconds of contact. Swirl in 1⁄2 teaspoon of the oil, add pancetta, reduce heat to low and stir-fry one minute or until the pancetta begins to brown and releases its fat.

Swirl in the remaining 2 teaspoons oil and the ginger and garlic, increase heat to high and stir-fry 10 seconds or until ginger and garlic are fragrant. Add bok choy, sprinkle with salt and sugar; stir-fry one minute or until leaves are just beginning to wilt. Re-stir the broth mixture and swirl it into the wok. Cover and cook one minute. Uncover and stir-fry a few seconds. Cover and cook one minute or until the bok choy stems are just crisp-tender and the sauce lightly coats the bok choy.

Serves: Two to three as a main course with rice, or four as part of a multi-course meal

Heat a 14-inch flat-bottomed wok or 12-inch skillet over high heat until a bead of water vaporizes within one to two seconds of contact. Swirl in 1 tablespoon of the oil; add ginger, then using a metal spatula, stir-fry 10 seconds or until ginger is fragrant. Push the ginger to the sides of the wok, carefully add the chicken, and spread it evenly in one layer in the wok. Cook, undisturbed, one minute, letting the chicken begin to sear. Stir fry one minute or until the chicken is lightly browned but not cooked through.