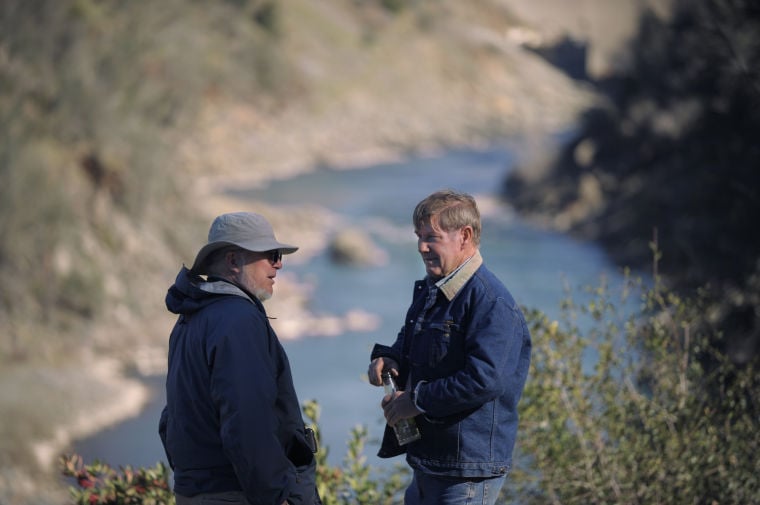 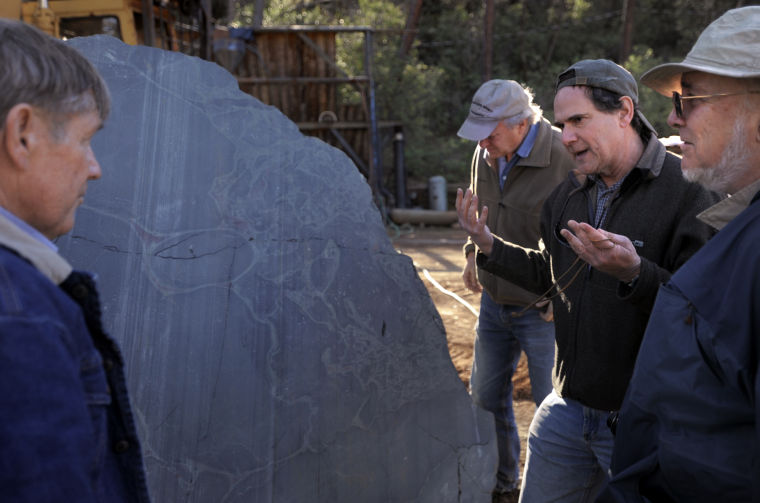 Truck engines scream over the curved crest of Stanfield Hill within a few feet of Eldridge Moores and his wife.

But the geologist, a pioneer in the field of plate tectonics, is engrossed in pointing out details on a map he has unrolled onto the tailgate of his friend's pickup.

He is speaking to novices about a region of the Sierra Nevada foothills delineated by geologists as Smartville Block. The area, much of which lies in north Yuba County, is well-known for valuable gold deposits and the colorful history of those who came to find them.

Gold is only part of a larger story though, and the miners who denuded this territory did so within a time period that barely registers on Moores' clock.

He strides away from the map to a nearby outcropping of dark jagged rock to marvel at the story it tells.

"This wasn't here when it was formed," he says of the igneous material that came together and traveled from the ocean floor on a moving stream of liquid eons ago. Moores marks off visually distinct sections of the rock with his hands, naming what he sees in between.

Each section reveals a distinct chapter in the region's story and provides information about events and setting.

After the molten ingredients hardened one by one into this single unit — in some place where the sea floor was in the process of spreading apart — "it showed up here, over the edge of the continent," he says.

That inland boulders could have traveled from the ocean is tough for his roadside students to comprehend.

But Moores, 72, is not easily discouraged. He speaks English as well as the language of the geologist, and can teach in both languages.

What is known today about the origins of this part of California owes largely to Moores' work. The University of California, Davis, professor emeritus was the subject of a 1993 best-selling book, "Assembling California" by John McPhee , which later was anthologized in McPhee's Pulitzer Prize-winning "Annals of the Former World."

Friday's trip with his wife and fellow educator, Judy Moores, was the second one he made last week. He came to inspect — or re-inspect — two large local boulders that soon will be placed outside his office.

With the help of local businessman Ralph Mullican, the rocks will become teaching tools at a new geology center on the Davis campus.

Mullican was contacted recently about allowing the UC Davis scientist onto his property outside Smartsville. Along a high canyon wall on the Yuba River, Mullican mines and cuts the prized steel-blue boulders for expensive landscaping and building projects.

The businessman is donating a five-ton chunk of his rock — one he sawed away from a 24-ton boulder admired by Moores on his first field trip here — to the university.

After polishing the smooth cut, he'll haul it down to its new home later this month.

He also will make sure another rock, one embedded in a hillside off Willow Glen Road near Moores' sample outcropping, will make it onto a truck bed and down to UC Davis. Between the Yuba blue stone and this other specimen, the professor thinks he can tell a comprehensive story about the way in which the Smartville Block came to be itself.

Mullican, meanwhile, says he's thrilled to be able to contribute to Moores' teaching work. An avid reader, the local, self-taught rock man knows McPhee's writing, and is a self-proclaimed admirer of its human subject.

"I forgot to have him sign my book," Mullican, 67, said after the scientist left his property early last week.

That morning had been a blur of excitement on his rocky property by the river.

Mullican cuts boulders open with a two-story sawing machine on a flattened spot in the grade. This broad ledge affords spectacular views of the Yuba River just downstream of Englebright Dam, and the newly cut teaching stone had been set out here with the smooth surface exposed.

Three geologists — Moores, Peter Schiffman and Robert Zierenberg , all of UC Davis, emerged from a single vehicle and quickly surrounded the object of their collective fancy. They grinned and chattered and moved from one spot to the next around the stone while Mullican watered it down with a hose.

"Like kids in a candy store," Mullican said of the men, who could not wait for this 160-million-year-old rock to be delivered to them. The hour-and-a-half journey they made for nothing more than a good look, had been, relatively speaking, less than the blink of an eye.

"We're guys who appreciate this kind of rock," Schiffman explained before returning to giddy talk of eruption and lava flow rates, pillow basalts and their glassy rinds.

"This is a piece of what used to be the sea floor. This is how the ocean crust repairs itself every few million years," said Zierenberg, interpreting in layman's terms the reason for all the fuss.

Zierenberg, known among fellow rock men as "Z," is especially well-qualified to talk about the sea floor. He has traveled on board Alvin, a deep-ocean research submersible owned by the U.S. Navy. His studies while working for the U.S. Geological Survey have involved close examination of the Escanaba Trough off the southern coast of Oregon.

Many geologic processes and a lot of time have been captured visibly in this rock. This is why the men came just to read its face, to stand back for long views, and then to put their own faces within an inch of trapped mineral deposits, using the geologists' trademark triplet eyepieces — worn on a lanyard or shoelace rope around the neck — for magnification.

"You can see bits of this in the rocks all around us, but having all of it in one nice sequence is fortuitous," Z told Mullican.

Study of this sublime Sierra foothills terrain owes something to Judy Moores, who during her husband's spontaneous roadside geology lesson, is quietly collecting bits of litter on the side of the road.

Forty years ago, she and her husband brought their three small children here in a VW van, in search of a new site to explore.

"This is one of the first places we went camping," Judy Moores says when Mullican drives his pickup past a sun-dappled Collins Lake.

But the unsung Smartville Complex in-between was virtually unknown to geologists — and to the Moores family — until then.

After McPhee's book was published 18 years ago and called attention to the unique morphology of the region, Eldridge Moores received dozens of requests for special geology field trips, including some to these rolling hills and craggy rocks. The husband-wife teaching team collaborates with nonprofit conservation groups and continues to act as ambassadors to the field of geology.

Eldridge Moores lobbies exhaustively for the earth sciences to be made mandatory in public schools, and for existing curricula to be enhanced.

It's important, "for people to understand something about how the earth works," he says. "Everything we use except sunlight comes from the earth."

But even the considerable weight of knowledge in his and other fields of science has not been enough to budge momentum or meaningful action during the current political climate, he says.

"We have this group of deniers. They deny there's any problem with climate change or the human factors that contribute to it. They deny that we have a resource problem," he says. "They don't want to face issues and they've made kind of a religion of that."

Those accustomed to thinking about time on a Jurassic scale, he believes, just might have something important to teach — if anyone will listen.

On this clear, unusually warm winter day, Eldridge Moores has left his soap box at home.

His wife peers over the edge of the pavement while he makes his way down for a close-up view of his second Smartville Complex teaching stone.

The steep drop doesn't faze him. Nor do the new-looking car parts scattered down the slope where innumerable drivers misjudged the grade-curve relationship on the road above.

Moores practically dances down to the bottom of the rock, loose soil slip-sliding under his feet.

In a few days, he will board a plane for an international meeting of geologists in Paris.

But just now, he is engrossed in the details of an ophiolite. It's got everything, he says, including, "chilled margins" that intrude into one another.

This rock, along with Mullican's, will provide students an illustration of the region's history — insofar as it is understood.

He is technically retired. But the scientist maintains an inquisitiveness and drive commonly associated with early postdoctoral students.

Who will likely continue this research he initiated in these foothills?

He hesitates thoughtfully for a moment.